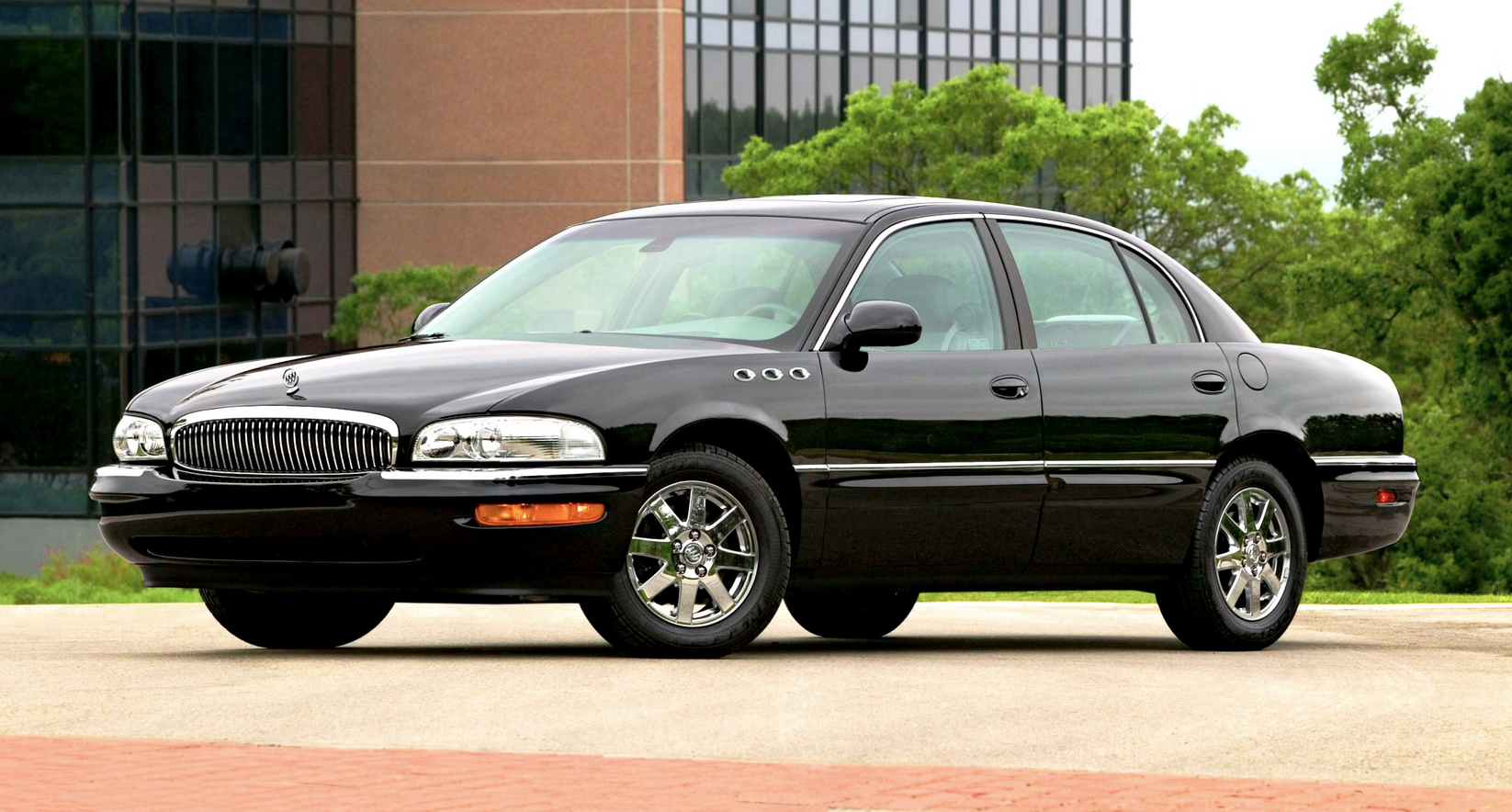 Among the storied model names of Buick’s past, the Park Avenue nameplate falls somewhat short of legendary. Buick monikers with richer histories and longer production runs include Century, Electra, LeSabre, Riviera, and Roadmaster.

Still, there is something special about the Park Avenue name–in many ways, it represented the last of a breed of big Buicks. The last Park Avenue rolled off the assembly line as a 2005 model, replete with the brand’s trademark front-fender Ventiports and mildly swoopy fender curves (which were starting to look a little dated at the time).

Buick replaced the Park Avenue with the decidedly more modern looking Lucerne, a large sedan which slotted between the Park Avenue and the LeSabre (which was also dropped after 2005) in terms of overall length.

The LeSabre and Park Avenue were built on General Motors’ G Platform architecture, which had also hosted the contemporary Cadillac and Oldsmobile models, including the Olds Aurora.

Though still called “G,” the Lucerne platform, which was shared with the redesigned 2006 Cadillac DTS, was heavily modified, chiefly in the name of improved cabin space.

And while Park Avenue might not rank among the all-time-great Buick model names, it was certainly a good one, and the last car to wear the name was reasonably well regarded, as the review below demonstrates.

This original 2005 Consumer Guide evaluation of the Buick Park Avenue includes a footnote discussing the car’s demise, as well as the cancellation of a large rear-drive sedan which was to be positioned above the Lucerne in Buick’s lineup. While the big car was never seen in the U.S., it was produced for China. You can read more about that car here.

Buick’s flagship sedan gets revisions to grille and taillamps for 2005, and the base Park Avenue model gains the front-fender “portholes” previously reserved for the top-line Park Avenue Ultra. Both models have a 3.8-liter V6 and 4-speed automatic transmission. The base model has 205 hp, the Ultra is supercharged for 240 hp. ABS, self-leveling rear suspension, and leather upholstery are standard. So is a front bench seat for 6-passenger capacity; Ultra offers optional front buckets. Ultra has 17-inch wheels, the base model 16s. Standard for Ultra and optional for the base model are a firmer Gran Touring suspension, OnStar assistance, traction/antiskid control, and a tire-pressure monitor. Optional rear obstacle detection and a head-up instrument display are also available. Buick says 2005 is the final model year for Park Avenue’s current design, which dates to 1997. It says the final 3000 Park Avenues will be Special Edition models with identifying logos, chrome alloy wheels, and available black-and-platinum exterior.

Standard chassis favors comfort over handling; it delivers a cushy ride, but with too much float over dips. Firmer Gran Touring suspension provides better body control without being harsh.

FRONT: Abundant head and leg room on comfortable seats, though standard bench is too narrow for three adults. Available buckets more effective at holding occupants in place. Outboard front safety belts spool out from seat and are thus handy, but not all testers find them a comfortable fit.

REAR: Roomy for two adults and more spacious than in LeSabre, Buick’s other large sedan. Still, three’s a squeeze, and a slightly firmer cushion would increase long-distance comfort.

More than in most class rivals, enhanced by flat trunk floor and low load lip. 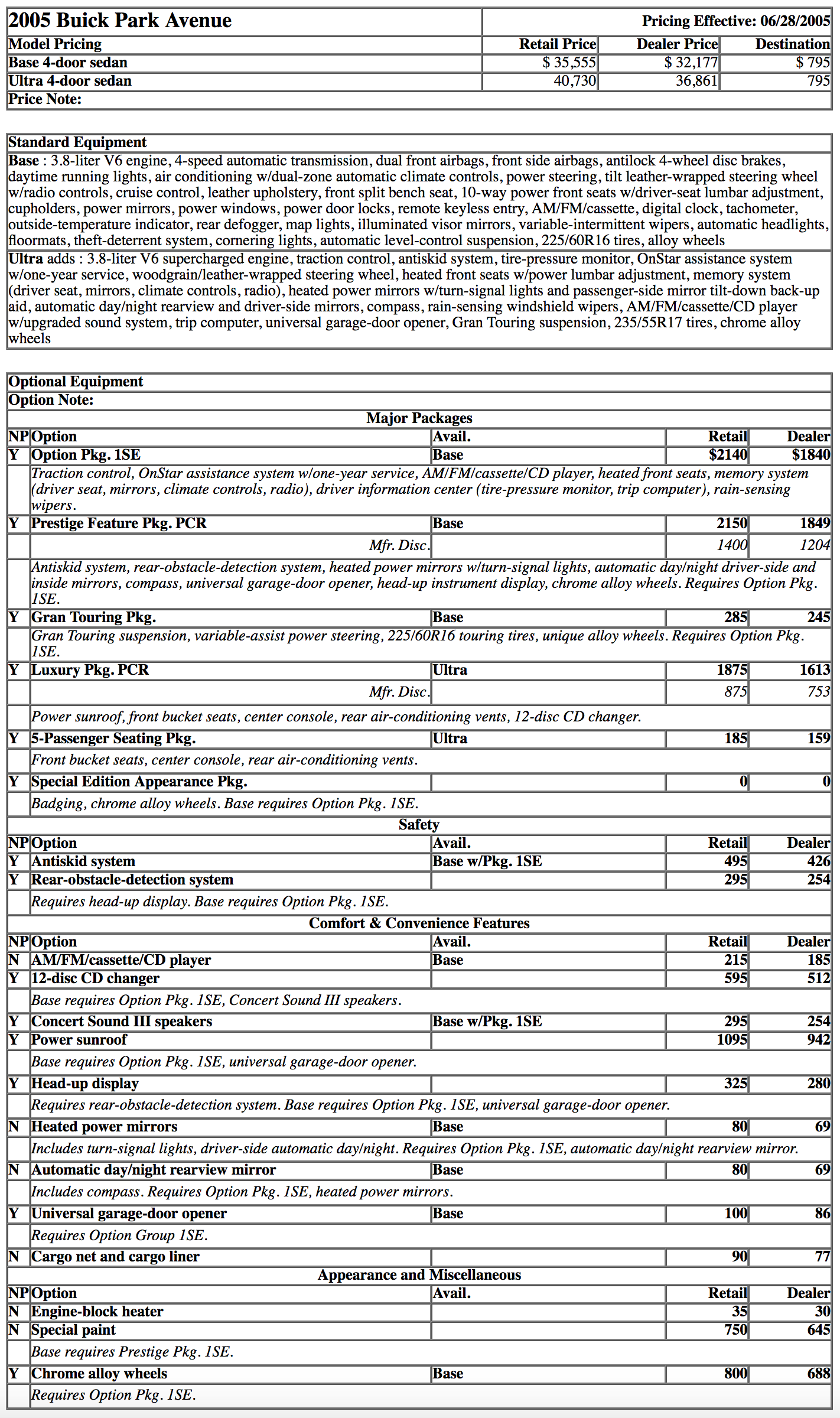 Park Avenue offers traditional American comfort and amenities at prices that undercut those of other premium large cars. For that, it earns Recommended status–with emphasis on the Ultra model as the better performer and the better value in this line. Continuing slow sales and end-of-line status mean attractive discounts and other incentives should be available.

Park Avenue lives on in spirit with the V8 version of the 2006 Lucerne, which ladles new styling and more-upscale appointments on the basic LeSabre/Park Avenue platform. An entry-level 3.8-liter V6 model aims to keep value-minded LeSabre owners in the Buick fold. The costlier, more luxurious V8 Lucerne uses GM’s familiar 5.3-liter engine, newly modified for front-wheel drive and featuring GM’s fuel-saving Displacement on Demand cylinder-deactivation system. Pontiac’s upcoming Grand Prix GXP uses this same V8. Meantime, GM has shelved its rear-wheel-drive Zeta platform and several new models planned for it, including a V8 Buick flagship sedan positioned upstream of Lucerne. GM eliminated the program as an emergency cost-cutting measure in the face of a severe profit squeeze brought on by slumping sales and the crushing cost of worker health-care benefits.