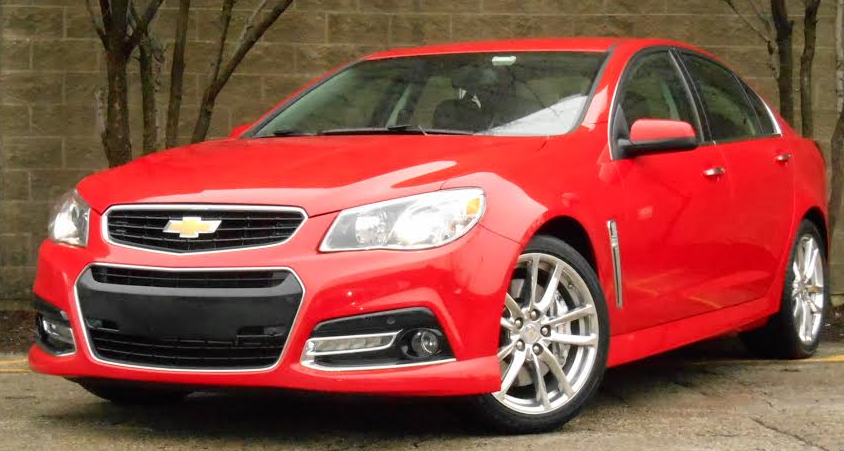 The not so good: Poor fuel economy, restricted outward visibility

Like it did when trying to revive the Pontiac GTO a decade ago, General Motors has again turned to its Holden subsidiary in Australia to provide a rear-drive performance-car platform. The donor this time is the Holden Commodore, which has been transformed into the 415-horsepower Chevrolet SS, the first hotted-up V8 “pusher” sedan to wear a bow tie since the instantly collectible 1994-96 Impala SS.

The world has taken a few turns since Chevy built that terrific taxicab with an attitude, and the old and new SSes reflect that. The 2014 SS wheelbase of 114.8 inches is just 1.1 inches shorter than that of the ’90s Impala, but the current car’s 195.5-inch total length is 18.6 inches shorter and, at 74.7 inches across, it is 2.8 inches narrower. Four passengers will fit in today’s SS with good head and leg room all around, but the erstwhile Impala SS could accommodate a third passenger in the rear if needed, and hip and shoulder room were never a problem—indeed, front-seat occupants had to extend their arms to reach the door arm rests. 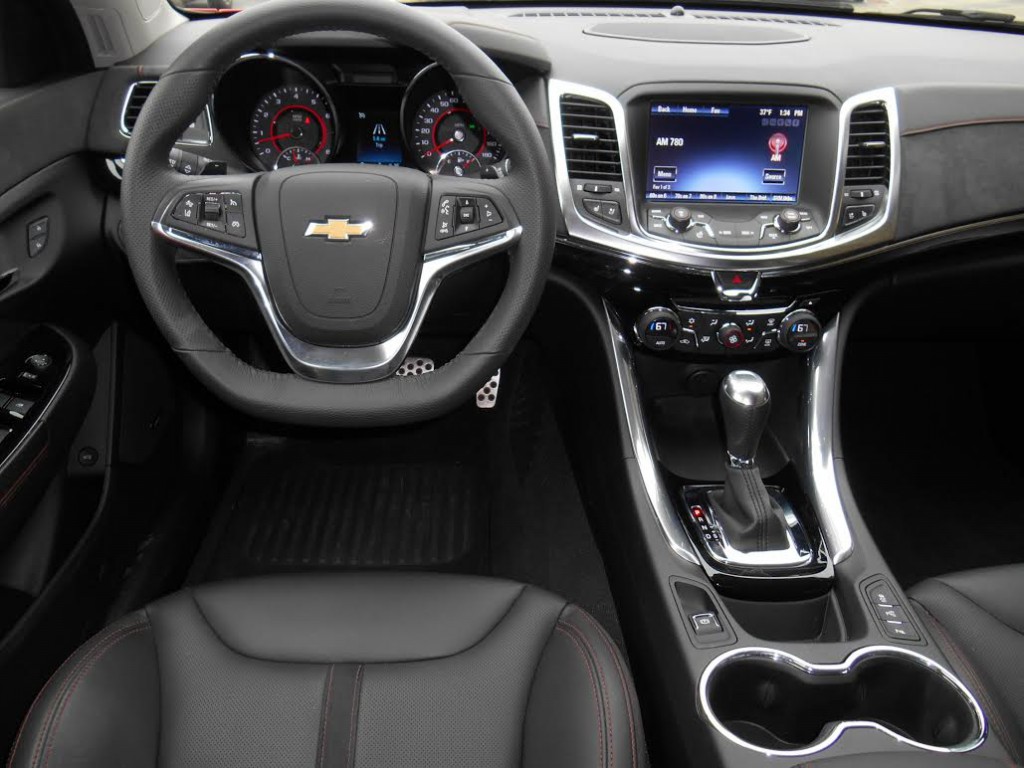 The SS’s cabin is nicer than you might expect, and certainly appropriate given the price.

There’s change under the hood, too. The modern SS sports a 6.2-liter LS3 V8 and 6-speed automatic transmission; Chevy says the car’s 415 horses and 415 pound-feet of torque are enough to deliver 0-60-mph bursts in about 5 seconds. The Impala SS’s 5.7-liter LT1 with 4-speed overdrive automatic generated 260 horsepower and 330 pound-feet, and got to 60 in 6.5 ticks. By any leadfoot standard, that’s progress. But the price of progress is measured at the pump. Where the ’90s Impala was EPA rated at 17 mpg in the city and 26 on the highway, the new car’s respective figures are 14 and 21. This tester’s spin in a new Chevy SS averaged 16.55 mpg, with 64 percent of the 52.5 miles driven under city conditions.

Curiously, the new car displays a lumpy jiggle at idle that feels like a distant echo of the SS nameplate’s big-bang moment in 1961, when a solid-lifter 409-cube V8 was at home in the engine bay. Having gotten used to decades of smooth powerplants, your first thought may be that there’s a “miss” in the engine, but under acceleration, the 2014 SS tears off strongly without a hitch, trailing a nice exhaust note that is muscle-car big.

Ride comes only one way: very firm. Damping wasn’t bad over road cracks and nominally patched potholes, but you’re never not aware of expansion joints and the like on the highway, both tactilely and audibly. Steering is quite responsive and economical in motion, body lean is well controlled, braking is quick and secure. 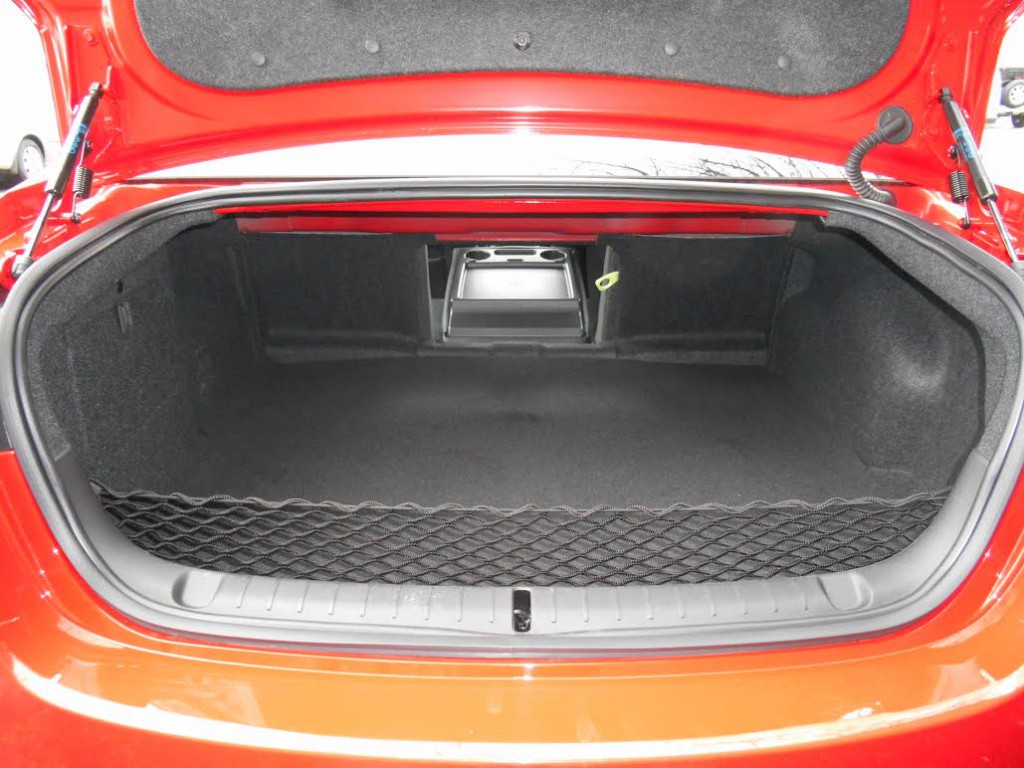 SS rear seats do not fold down, but a center pass-through allows for the loading of longer items.

The interior strives to be sporty and upmarket at the same time. There are some padded areas on the dash, and suedelike stuff with red contrast stitching is found on door panels and on the dash above the glovebox. Shiny metal accents throughout brighten up what could be the dark night of the automotive soul. (Black is the sole interior color offered.) Big analog dials keep the driver informed. However, hard plastic on the tops of doors, parts of the dash, and the sides of the console remind that there’s still some cost-cutting going on.

Perforated-leather seats are comfortable and supportive. Entry and exit are easy, but over-the-shoulder visibility is compromised by a lowish roofline and thick C-pillars. The adjustable steering column helps the driver attain an optimal seating position, and the racy flat-bottom wheel opens up a little more room for the pilot. Interior storage is limited. There are small-volume glove and console boxes; a couple small, shallow open bins on the console; two open console cup holders; smallish map pockets in all doors; and pouches on the backs of the front seats. Rear occupants can avail themselves of a pull-down center armrest, but unlike some cars with this feature, it doesn’t contain cup holders.

The trunk is big and square for optimal space utilization. The opening is conveniently wide, but lift-over is a little on the high side. Struts hold up the aluminum decklid, not space-robbing gooseneck hinges.

At $43,475 to start (plus another $1300 in Gas Guzzler Tax), the 2014 Chevrolet SS costs about twice as much an Impala SS did at its debut 20 years ago. Of course, the new car comes with some things that would have been pipe dreams back then, like the MyLink infotainment system, navigation, rear-vision camera, forward collision alert and lane-departure warning, and automatic parking assist. Aside from the high-horse engine and trans with steering-wheel paddle shifters, standard performance features include a limited-slip differential, auxiliary engine-oil cooler, 4-wheel disc brakes with Brembo units up front, rear spoiler, and 19-inch alloy wheels on staggered-width tires. The only factory options are a power sunroof ($900) and a full-size spare tire ($500), though a number of dealer-installed accessories are offered.

If a company is going to resurrect a hollowed performance moniker from its storied past, it darn well better be for a car that’s worthy of the name. And the SS most certainly is.

Many cars that are probably just as quick 0-60 as the SS really aren’t the same kind of quick. There’s an old saying in the automotive world that “There’s no substitute for cubic inches,” and that’s really what’s at play here. Regardless of speed, stab the throttle of the big 6.2-liter V8 (376 cubic inches for us old-timers), and the response is virtually instantaneous. Some credit can go to the automatic transmission, which downshifts at lightning speed, but the end result is a glorious rush that can’t always be equaled with intake boost. 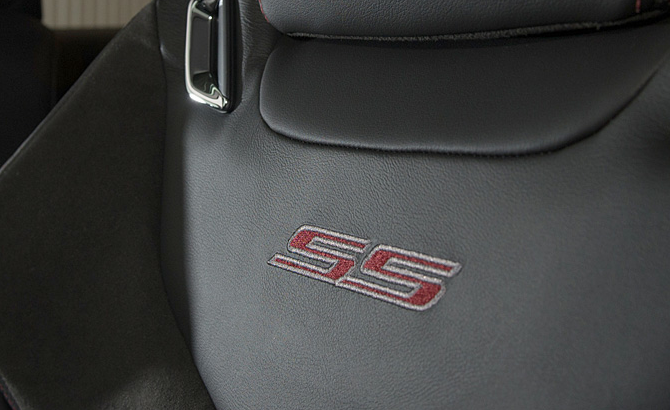 The SS cabin features a number of unique identifiers, including an SS badge on the dashboard, and this logo stitched into the front seats.

Another thing that stands out under those prods of the throttle is the full-bodied exhaust note. Whatever effort was spent tuning it for that sound was time well spent, as there’s a raucous roar when giving it the boot and a faint but audible rumble even at cruise. It just flat screams “muscle.”

Some cars of this ilk can be downright punishing on our Chicago-area roads, but the SS rides reasonably well for a performance machine. At the same time, steering response and cornering precision are about as good as can be expected of a two-ton sedan, so the ride/handling balance seems impressively well thought out.

A bit less so, perhaps, is the control layout. There are times I wished the huge amount of blank dashboard screen would host some virtual buttons that pointed to the next logical step one might want to perform, but at least there are actual volume and tuning knobs and a few real buttons. Gen-u-ine knobs and buttons are also a blessing for the climate controls, as temperature and fan speed are adjusted with good ol’ rotary knobs, with mode selected with individual pushbuttons.

My only real complaints with the SS are with visibility (all the roof pillars are quite thick) and the lack of fold-down rear seat backs (there’s just a small ski pass-through). And maybe that it starts at a rather sobering $46,000 with destination and Gas Guzzler Tax. However, that’s for a very well-equipped car, and this kind of performance has never come cheap…at least, not since the days when the original SS roamed the earth.

I recall a lot of complaining on the Internet when Chevrolet announced that the 2014 SS would carry a sticker price of nearly $45,000. I suppose the sticker shock is understandable, if you compare the SS to a garden-variety Impala… but that’s not a proper comparison. It’s more appropriate to put the 2014 Chevrolet SS up against a Chrysler 300 SRT8 or a Dodge Charger SRT8–and Chevy’s big 4-door, rear-drive muscle machine stacks up very well against those two Mopars, thank you.

The SS has an agility that belies its plus-size dimensions, yet the ride is still decent enough to be comfortable on a daily basis. The interior has a wonderfully upscale feel; this is hands-down one of Chevrolet’s classiest cabins. And—no surprise here—the 415-horsepower 6.2-liter V8 is downright addictive, delivering copious muscle whenever you want it with a delightfully macho soundtrack.

Yes, the SS’s fuel economy is subpar, especially when you drive it the way it begs to be driven. That fuel thirst, along with the steep-for-a-four-door-Chevy sticker price and relatively understated styling, will certainly keep SS sales low, and limited to a pretty specialized group of buyers. I’m still a little amazed that Chevrolet saw fit to produce the SS, but I am happy that they did. If you missed your chance to grab one of the few Pontiac G8 GXPs that General Motors produced back in 2009, here’s your reprieve.