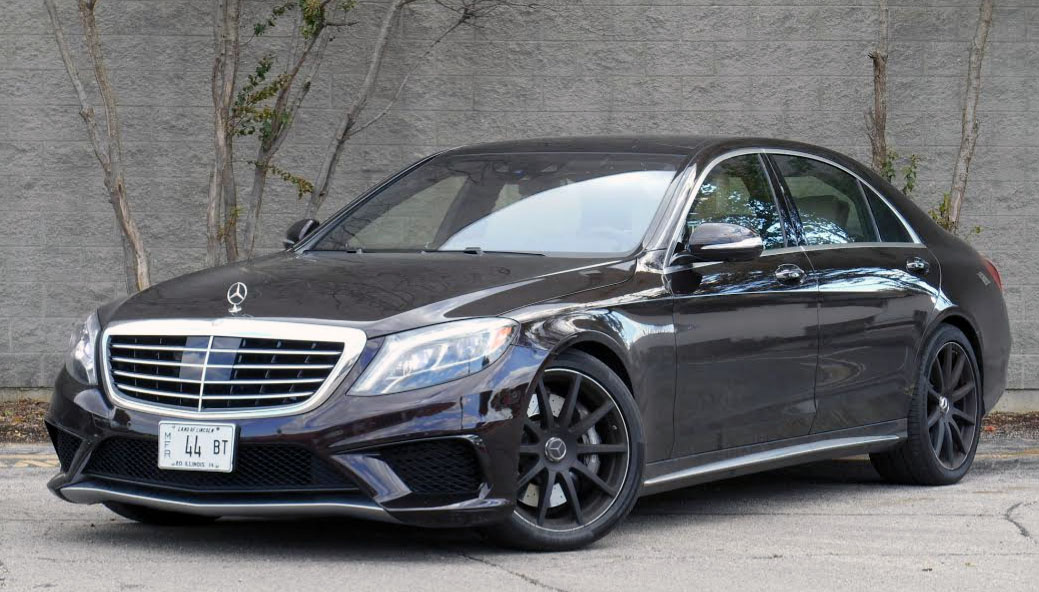 There’s a lot of substance to the Mercedes-Benz S63 AMG. (After all, it does weigh in at close to 5000 pounds.) In fact, there’s plenty more of it than can be fully experienced in just a couple of days with the car—which is a blessing and a curse.

It’s a blessing from the perspective that the amazing stuff is there in the first place. This thing has a branded system for managing practically everything. (My favorite name is ”Magic Vision Control,” which suggests something from the realm of the supernatural; it is actually a pair of wiper blades with a series of built-in washer jets to do away with the big splash of fluid that run-of-the-mill washers indiscriminately disgorge on more plebeian windshields. Hey, somebody worries about this.) 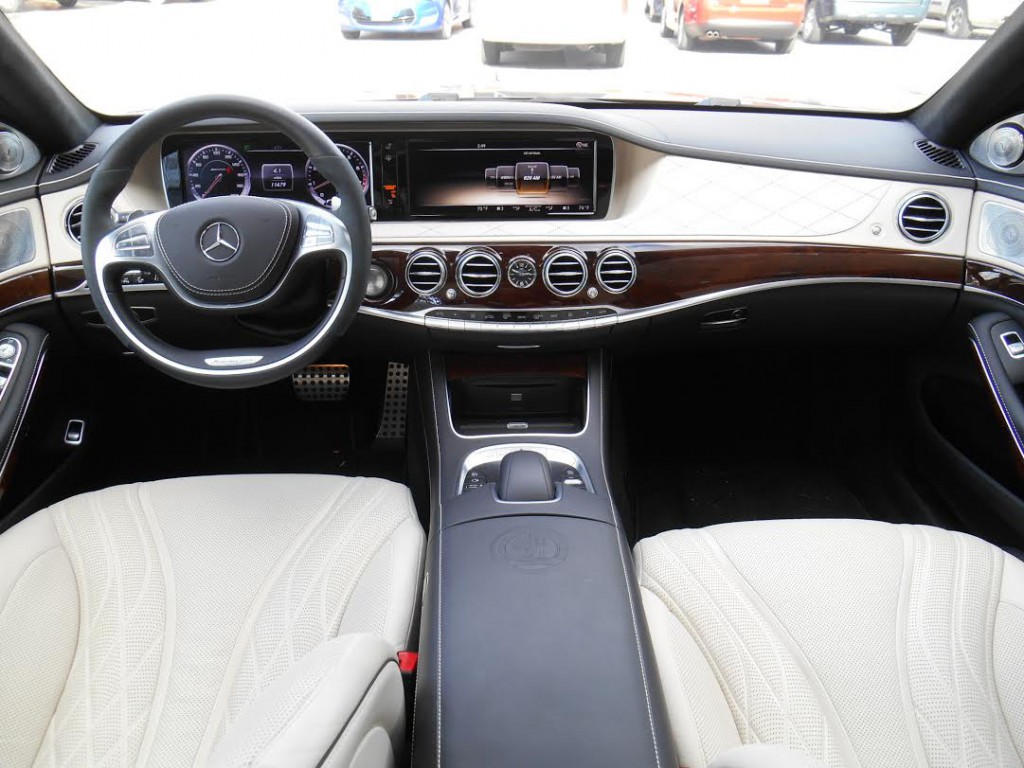 Our editors agree that the S63’s cabin represents Mercedes craftsmanship at its best. John, however, is not a fan of the complicated COMAND control system.

It’s a curse when you consider just how many functions, alerts, compensators, mitigators, and just plain doohickeys—for lack of a better word—are there for the mastering. You should live so long. On the 2nd of 2 nights with the car, this tester stunned himself by stumbling onto the secret of how to preset radio stations through the tastefully covered keypad on the console. He settled on satellite stations. There must be a method to simultaneously save AM and FM stations, but that would have required time I didn’t have for advanced study, and no amount of exploratory tapping, twisting, and toggling of the COMAND-system rotary dial seemed to reveal this knowledge. The dual climate controls are activated by 11 buttons laid side by side.

Then, too, that’s a lot to potentially go wrong. For instance, what’s it going to cost to get the Crosswind Assist system fixed should it go out? And will you even know that it has conked out? I’m having a hard time imagining anything short of a hurricane blowing this motorized nose tackle off course.

This is what you get for $163,835 with delivery and options. Of course, there is the little matter of the 577-horsepower twin-turbocharged V8 and a regally plush interior, too.

The 5.5-liter V8 generates 664 pound-feet of torque. Churning through a smooth 7-speed automatic transmission, it hurls the hot rod of the august S-Class family to 60 mph in what Mercedes estimates is 3.9 seconds. Furthermore, it does so without any abundance of uncultured noises. (An AMG sport exhaust gives the S63 its authoritative but not grating voice.) As for fuel consumption, this tester averaged 16.22 mpg from a trip of 114.1 miles, with 57 percent of those miles under city conditions. 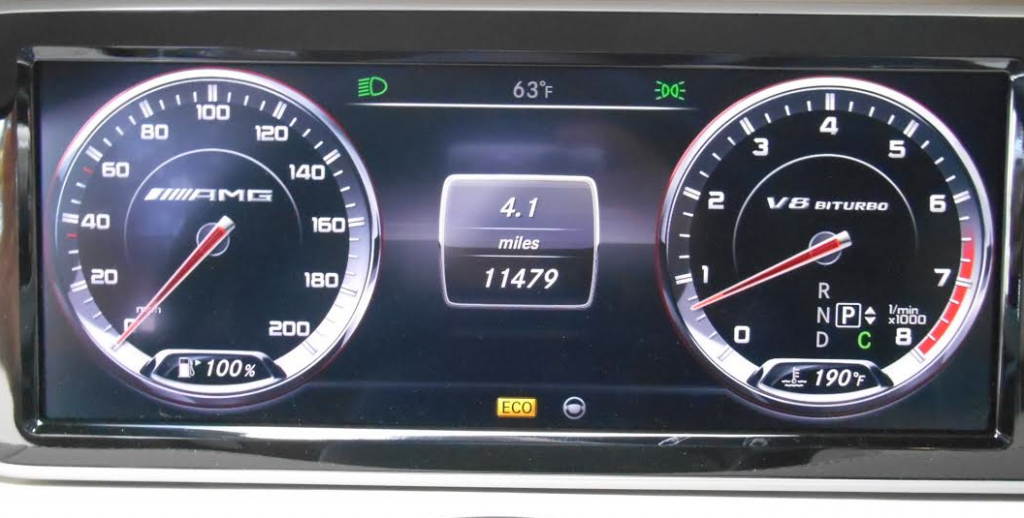 Most drivers will never realize that the gauges seen sere are virtual rather than mechanical.

The S63 AMG is equipped with 4MATIC all-wheel drive, but with a power split biased towards sending more torque to the rear wheels. Steering has an appropriately meaty feel that helps to keep this bulldozing Benz under control. As for ride, there are “Comfort” and “Sport” modes available at the touch of a button on the console. Selecting Sport firms up the damping somewhat, but didn’t seem to overdo it. Ride is firm in Comfort or Sport, but not crunching in the latter. The big ventilated compound disc brakes clamp down the S63 with conviction.

The cabin is absolutely plush, with leather and wood seemingly everywhere. Some thing or other in there must, of necessity, be made of hard plastic, but I couldn’t find it. Seats are cradling leather lounge chairs—you’ll really hate to leave them when you get where you’re going—and even rear-seat passengers have melon-cosseting head rests in which to settle themselves. The back seat is set up for 3 across, but good luck being Mr. In-the-Middle who has to straddle the substantial driveline hump. Availing yourself of the pull-down center arm rest with cup holders is a better use of this space. 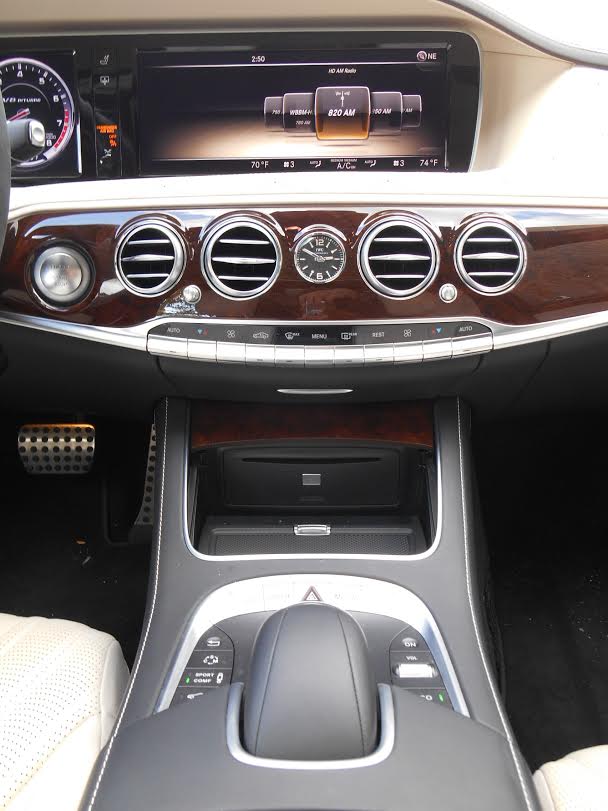 The large console-top control screen is easy to read, even in bright light. The hand rest seen lower in this photograph obscures the COMAND control knob which is used to execute almost all audio and climate functions.

Oddly, the trunk is small for a big car, with somewhat high liftover and an opening that narrows toward the bottom. There was no full-size spare for the AMG’s 20-inch performance tires, which opened up some storage possibilities in the underfloor well.

Jumping up from the $139,500 starting price, our test car was well stocked with the extra-cost weird and wonderful that M-B has decided you ought to have in a performance/luxury automobile. Nightview Assist PLUS with thermal imaging for better vision in the dark? It was in there. So was a 24-speaker Burmester surround-sound audio system that’s even better than the standard Burmester surround-sound audio system. Heated and ventilated rear seats (to match the same in front); heated door and center armrests front and rear; Surround View camera that displays an overhead view of your surroundings (with a projection of the car within those surroundings) to avoid obstacles at low speed—they were all tacked onto our test car. And if you really want to come up smelling like a rose, there’s the cabin fragrance system, an atomizer that draws on a glove-box-mounted vial of a scent (and there’s a choice) that is automatically puffed at intervals into the cabin.

It’s no secret that I consider the S-Class a nearly perfect vehicle. Well, I consider the now entry-level S550 a near perfect vehicle. My praise for this roomy, dignified, high-speed cruiser centers mostly on the big sedan’s remarkable ride and handling. No vehicle, regardless the price, matches the S550’s poise over less-than-perfect road surfaces.

Given my affection for the simplest of S-Class vehicles, I approach “upgraded” versions of Mercedes’ flagship with a certain apprehension, and our test S63 was no exception.

For the most part, my fears were unfounded. Though the S63 does, indeed, ride with somewhat less grace over flawed road services, it’s still better than most vehicles on the road. And what ride comfort is given up is compensated for by the AMG’s buttery-smooth delivery of massive power.

The cabin is better finished than anything in my house, and the optional Burmester audio system (unnecessarily labeled “high end” on several of the cabin’s metal speaker grilles) impresses both visually and sonically. 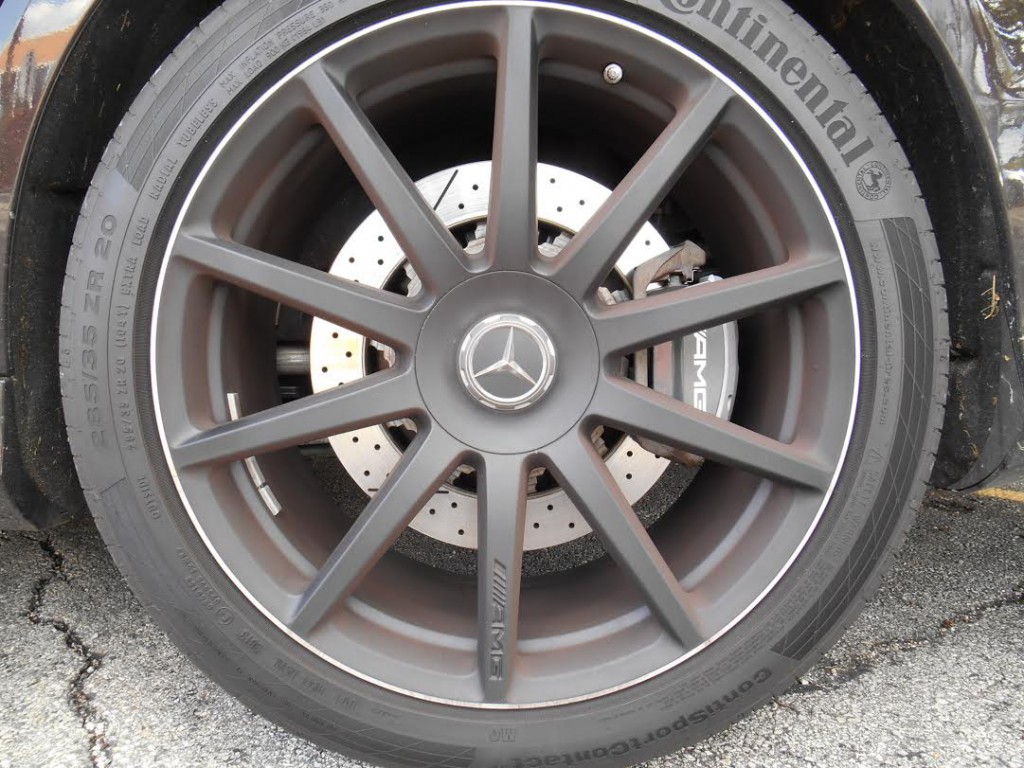 I remain the lone Consumer Guide fan of Mercedes COMAND control system. I find the location of the control knob spot on, and the cushioned wrist pad just above the knob placed perfectly. As for the digital interface itself, it’s as simple and logical as any system out there.

I have two complaints, however. First, I found that the on-screen appearance of the car’s 360-degree top-down view to be oddly inconsistent. At times it would pop up in a drive-thru and while parking (super handy) and at other times not. A switch to the left of the steering wheel would active the around-car view, but composed differently than the automatic view, this being comprised of a less-inclusive split screen presentation that involves a 180-degree forward shot. Very odd.

My second issue comes, I believe, courtesy of the car’s AWD system working in conjunction with the massive AMG tires. While turning at tight angles at low speed, the car periodically produced a short screeching noise while seemingly hopping. If I had been driving a 1977 Jeep CJ-7 in 4WD on dry pavement I would say the system bound up. As this is a $160,000 Mercedes, I don’t know what to say, only to note that the crude behavior is unbecoming a contemporary Benz.

Complaints aside, the S63 AMG is a majestic beast; a vehicle so capable it seems a shame to drive it in slow-moving traffic. If you’re in the market for a huge, luxurious, high-performance sedan, you need to test drive the S63. That said, the S550, a car that rides better—and costs much less—is available in the very same showroom.