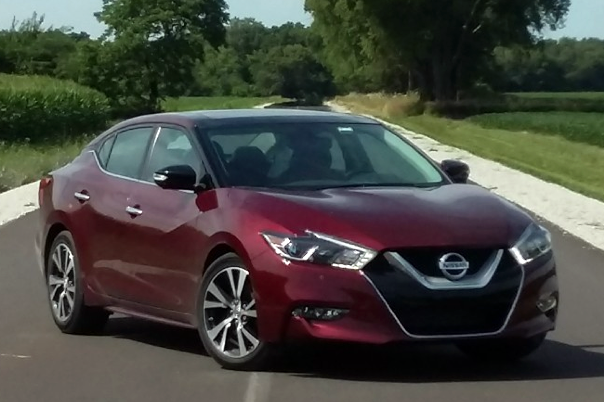 Nissan’s Maxima comes standard with V6 power and stands as an upscale, sporty take on a midsize sedan. The tested top-line Platinum came to just under $41,000 including destination.

The not so good: Not as much interior room as some midsize cars, price 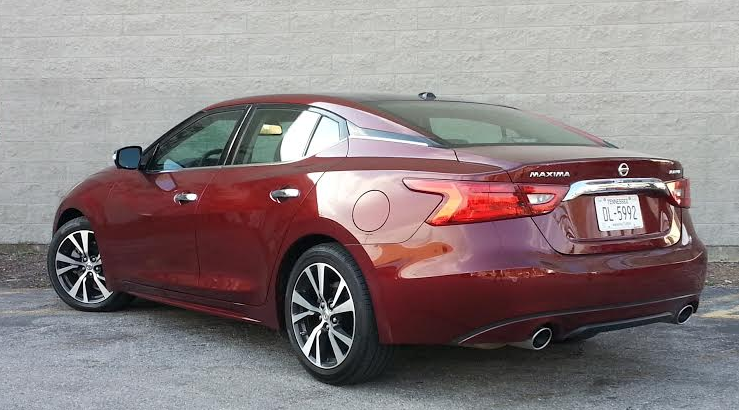 Dramatic styling touches include a “floating” roof, swoopy side sculpturing, and “boomerang” taillights.

Some might question Nissan’s strategy in continuing to offer the Maxima. Sandwiched as it is between the mainstream midsize Altima sedan and the ”upper crust” midsize Infiniti Q40 and Q50 sedans from Nissan’s luxury division – and sharing exterior sheetmetal and interior appointments with none of them – it seems to be an expensive slice of a shrinking pie. Yet the Maxima, which was introduced in the early ‘80s and thus precedes its corporate siblings by at least a decade, has continued to draw an audience.

In its opening years, Maxima stood as Nissan’s bread-and-butter midsize sedan, though a somewhat sporty, upscale one. That remained the case when the original Altima was introduced for 1993 as a compact. But as the latter grew larger with each ensuing design generation, the two sedans became closer and closer in size. And as the midsize class itself began offering more and more features – as a group challenging premium makes for amenities – the corporate duo became even closer in stature.

That didn’t seem to be a concern during the decades when midsize sedans represented the most popular segment in all of autodom. But the class recently lost its sales crown to compact SUVs – which continue to increase their lead – making it ever more questionable why Nissan continues to offer both.

During its heyday in the 1990s, Maxima was pushed as a “Four-Door Sports Car” (It even carried “4DSC” decals on its side windows). Hyperbole or not, it was nonetheless a far sportier entry than most rivals offered. That continues to be its drawing card, even though the Altima – which comes standard with a 2.5-liter four – is offered with the same-size (3.5-liter) V6, though rated at 270 horsepower vs. the Maxima’s 300. 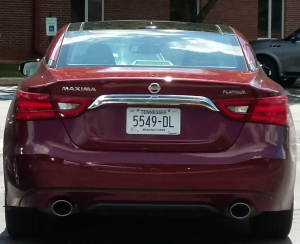 … than the similarly sized but sportier Maxima. 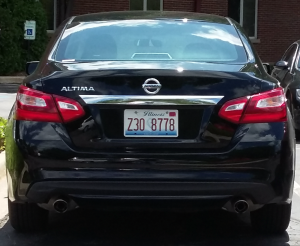 Set Nissan’s two midsize sedans side-by-side, and you’d notice that while their overall lengths are within an inch of each other, the Maxima is notably “squattier,” being more than an inch wider and an 1.5 inches lower, both of which would tend to benefit handling. And since weights are within 60 pounds of each other, the Maxima’s 30-horsepower advantage shows up in a quicker 0-60-mph time; one source puts it about a .5 seconds ahead of the Altima, and our test Maxima clocked a quick 5.9-second run. Even more than that, the V6 gives the car a strong full-throttle launch off the line that no 4-cylinder turbo can match, and the CVT automatic downshifts very quickly for more passing power.

While our overall fuel-economy average over 804 miles of 85 percent highway driving was 31.2 mpg, an earlier stint of mostly city driving netted a somewhat less-impressive 20.7 mpg. Note that Nissan recommends (though doesn’t require) premium-grade gas for the Maxima.

Ride and handling are, expectedly, on the sporty side for a midsize sedan. While somewhat firm, the suspension absorbs most bumps quite well while giving the Maxima confident, planted composure in corners. Steering has a nice feel (though some of our testers think it too “light” for a sports sedan), and the car seems to dive toward the inside line in fast turns. It’s no sports car, but it definitely has a sporting feel. 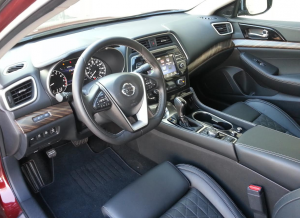 Inside, the driver is treated to a power-tilt seat cushion, and the power-adjustable steering wheel is incorporated into the seat memory system, one nicety that many midsizers (which usually have a manual-tilt/telescopic steering wheel) don’t offer. The interior is nicely trimmed with many padded surfaces, rich wood panels, and quilted leather upholstery (now all the rage on really high-end cars). Visibility is good to the front and sides, fairly good to the rear, and our test car had Nissan’s Around View Monitor that shows a nearby 360-degree bird’s-eye view of the vehicle. Interior storage is quite good, and there’s good front headroom and legroom. In back there’s enough headroom for most 6-footers – though barely – and legroom is adult-sufficient unless the seat ahead is pushed far back, in which case it’s really tight. Also, the door opening is narrow enough that some might catch their hip on the doorjamb on egress.

Whereas seeing the gauges in many cars is very difficult while wearing sunglasses, those in the Maxima are bright and easily seen even through shades. Also worth noting is that the audio system is unusually easy to operate, as it features several good ol’ buttons and knobs (gasp!) augmented with on-screen graphics, all within easy reach. Climate controls are likewise easy to reach, but while temperature is adjusted with a handy knob, fan speed and mode are adjusted with more tedious repetitive-step pushbuttons.

The trunk is wide at the rear, and though the sickle-shaped hinges dip into the load area, they’re covered to prevent damage to luggage. The rear seat backs fold, though they rest about one inch above the load floor, so you can’t easily slide long items forward, and the opening is somewhat restricted. 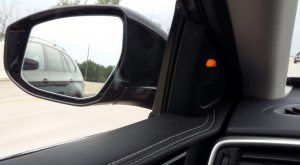 The warning light for Maxima’s blind-spot monitor is mounted in the roof pillar rather than on the sideview mirror, where it’s not only closer to the driver’s line of sight, but can’t be hidden by fog on the window.

While our test car was a line-topping Platinum model that listed for just over $40,000 with destination, the base Maxima can be had for just over $33,000, about where the top V6-powered Altima SL leaves off. So in the whole scheme of things, you’re not really paying all that much more for a car that has an upscale aura, distinctive looks, sportier driving dynamics, and some high-end features its mainstream sibling lacks. Granted, Nissan only sells one Maxima for every six Altimas, but that only adds to the former’s appeal, as you’re not going to see one every other block. It all makes the Maxima sort of a cut-rate sports sedan, which is exactly what it’s been from the start.