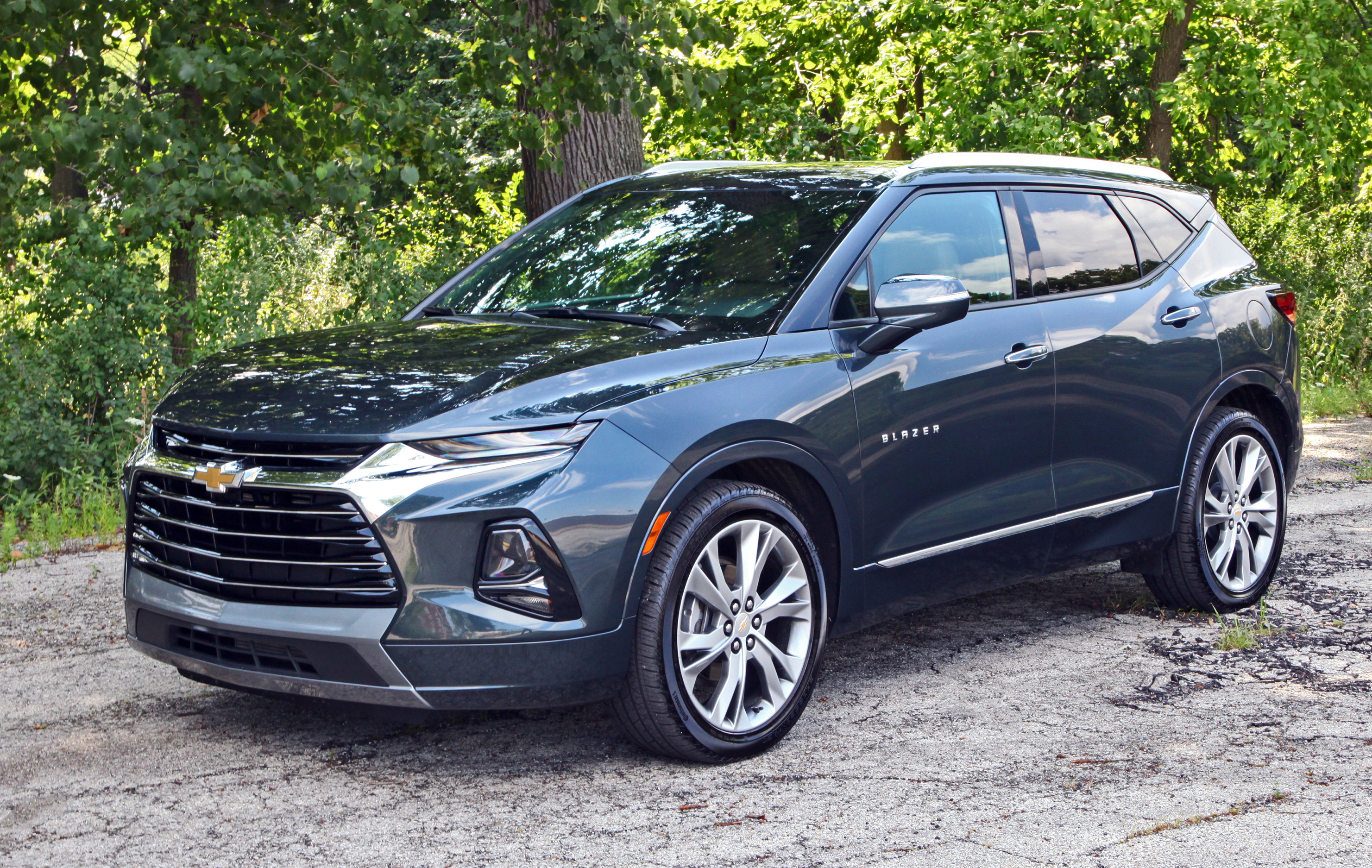 The great: Smooth, strong powertrain; generous passenger room in both the front and rear seats

The good: Polished road manners with a touch of athleticism; long list of available comfort, convenience, and safety features

There is a certain amount of risk carmakers accept when they resurrect a legacy name and apply it to a new vehicle. The product planners at Chevrolet knew what they getting into when they dubbed the brand’s new midsize crossover Blazer, unboxing a name that went into storage after the 2005 model year. It’s a good name, though, evoking images of off-road forays and conveying a general sportiness. However, there is another name that might have been applied to this all-new crossover: Monte Carlo. Let me explain why… 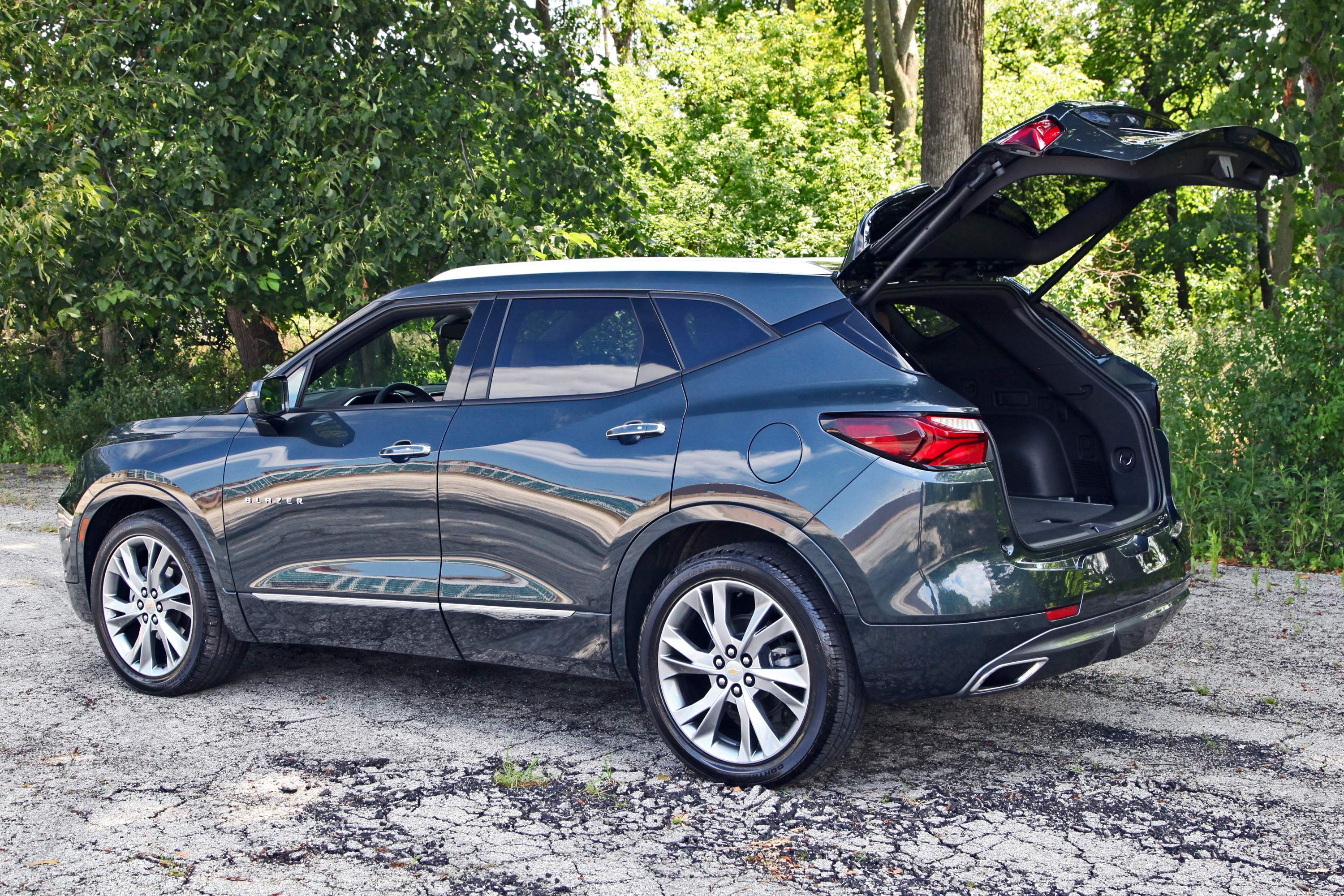 Introduced as a 2019 model, the revived Blazer is a two-row, five-passenger midsize crossover that slots in size and price between the Chevy’s compact Equinox and midsize/large Traverse in the brand’s SUV roster. Chevy is not the first brand to add a second midsize crossover to its lineup—Ford (Edge, Explorer), Honda (Passport, Pilot) and Hyundai (Santa Fe, Palisade) have also done so. In each case, the larger vehicle of these duos comes standard with three seating rows, while the smaller vehicle has only two rows.

The Premier is the top-line Blazer model, and its cabin is trimmed accordingly, though there was some difference of opinion among our testers on how well the interior achieved a high-end ambiance. Regardless of trim level, the Blazer offers excellent space for adult passengers in the back seat.

What differentiates the Blazer from the Edge, Passport, and Santa Fe is an emphasis on comfort and style at the expense of utility. While the Blazer offers meaningfully more passenger space in both the front and rear seats than the Equinox, its cargo space is somewhat limited. Indeed, the midsize Blazer provides just a bit more storage room than the compact Equinox—it offers 30.5 cubic feet of space behind the rear seats and 64.2 with the rear seat backs folded, compared to the Equinox’s respective measurements of 29.9 and 63.5 cubic feet. 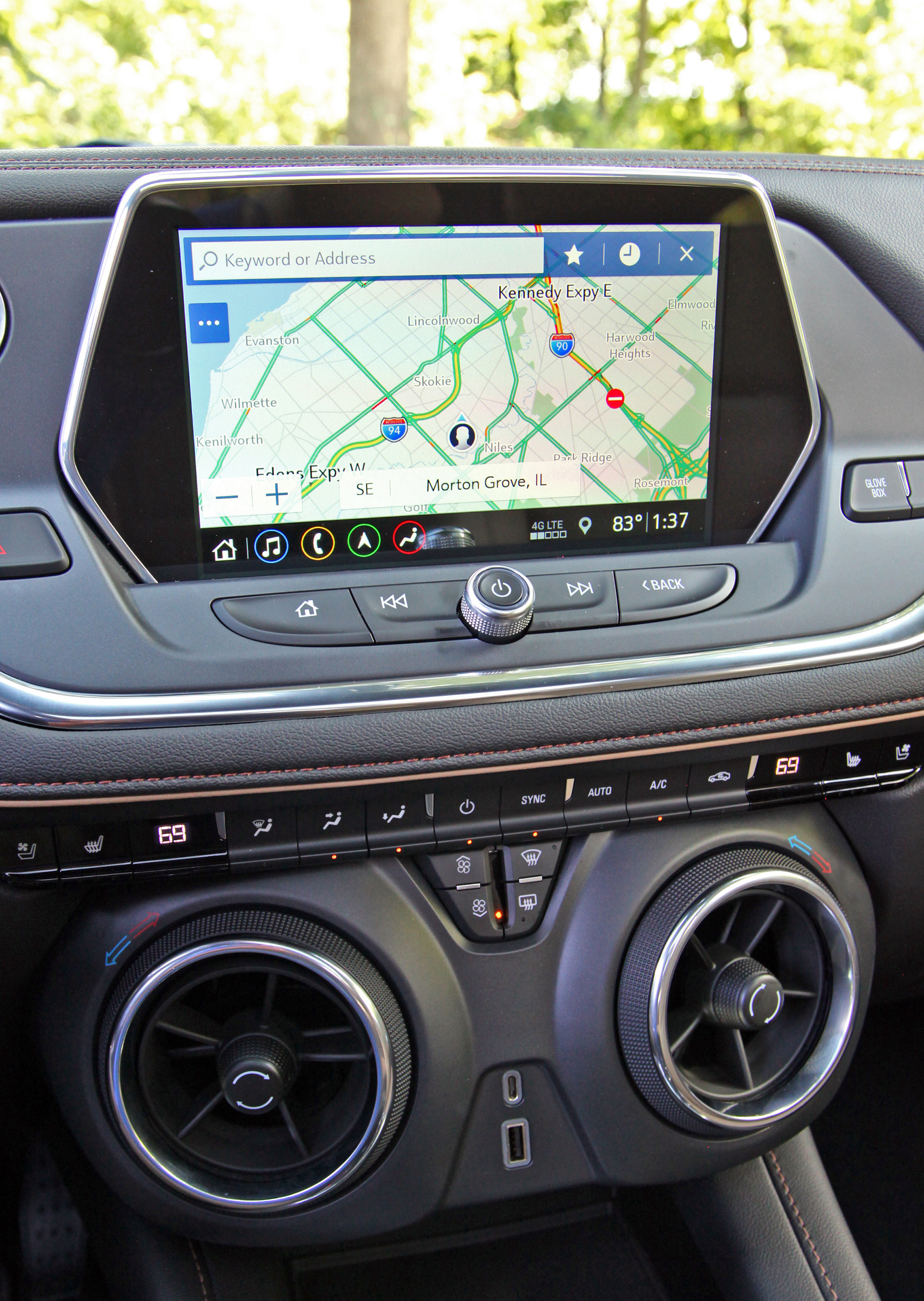 Chevrolet’s feature-rich, easy-to-use “Infotainment 3” touchscreen system got high marks from our testers, but the row of climate-control buttons beneath the screen is small and somewhat awkwardly placed.

Blame the Blazer’s rakish roofline and narrow cargo hold for the relative lack of capacity. Not that there isn’t plenty of space in the Blazer—there’s just less room than most shoppers in this class might expect. Thus, as it is packaged in manner that emphasizes cabin comfort and a photogenic presence, the Blazer is very much like the personal luxury coupes of the Seventies and the Eighties—the most popular of which sales-wise was, overwhelmingly, the Chevy Monte Carlo.

Consumer Guide recently had the all-new Blazer through our Chicagoland test fleet, and our impressions are mixed, though generally positive. Our top-of-the-line AWD Premier came equipped with the $2495 Sun and Wheels Package (which consists of a panoramic sunroof and nickel-finish 21-inch alloy wheels) and listed for $49,290. Missing from our tester was the available Driver Confidence II Package ($2165), which consists of a rearview camera mirror, safety-alert seat, wireless charging, advanced adaptive cruise control, automatic high-beam headlights, following-distance indicator, forward-collision alert with automatic emergency braking and front pedestrian braking, lane-keep assist with lane-departure warning, and HD Surround Vision camera display. The addition of the Driver Confidence II Package—which includes some key safety features that should probably already be standard in a top-of-the-line model like the Premier—would have pushed our test vehicle’s bottom-line price well past the magic $50,000 barrier. That feels like a lot for a popular-brand crossover, even one very well equipped.

Though the base Blazer with front-wheel drive starts at just over $31,000, models equipped with leather trim cannot be had for much less than $40,000, reaffirming our position that the Blazer is more about luxury than value or utility.

That said, this author had the opportunity to utilize our test Blazer in the task of moving his daughter from the suburbs of Chicago to Monmouth College in Monmouth, Illinois—a round-trip journey of about 400 miles. As luck would have it, I performed a similar college-daughter transfer earlier this year while evaluating a 2019 Ford Edge Titanium, and the contrasts between the two crossovers are worth noting.

Most importantly, perhaps, the Edge’s nine extra cubic feet of cargo space means the difference between simply packing up and hitting the road and carefully loading and unloading the vehicle until we were able to make all of my daughter’s stuff fit. Ultimately, we were able cram everything into the Blazer, but the process of loading it was akin to playing a high-stakes game of Tetris, with virtually every cubic inch of available storage space coming into play.

On the road, the Blazer comes into its own. Even with the weight of a dorm room in the cargo hold, the Chevy’s 308-horsepower 3.6-liter V8 gets the job done, and sounds good doing it. The largish V6 is smooth under all conditions, and the standard 9-speed automatic transmission operates with muted refinement. Our test Blazer averaged just under 22 mpg in driving that consisted of roughly 70-percent highway use (the EPA’s estimate is 21 mpg in combined city/highway driving).

Any antiquated notion car shoppers may have about what a Chevrolet cabin should look like will be dispelled when examining an upper trim-level Blazer. The cabin is especially well appointed, and assembly quality looks top-notch—though at nearly $50,000, our test Blazer should feel like a luxury vehicle.

Even on the 21-inch alloy wheels (which replace the Premier’s standard 20-inch units), the Blazer’s ride is comfortable, though firm in the tradition of European crossovers. Buyers considering a Blazer with the Sun and Wheels package, or the sporty RS model, will want to test drive Blazers with smaller-diameter wheels (18-inch alloys are standard) if they prefer a softer ride. 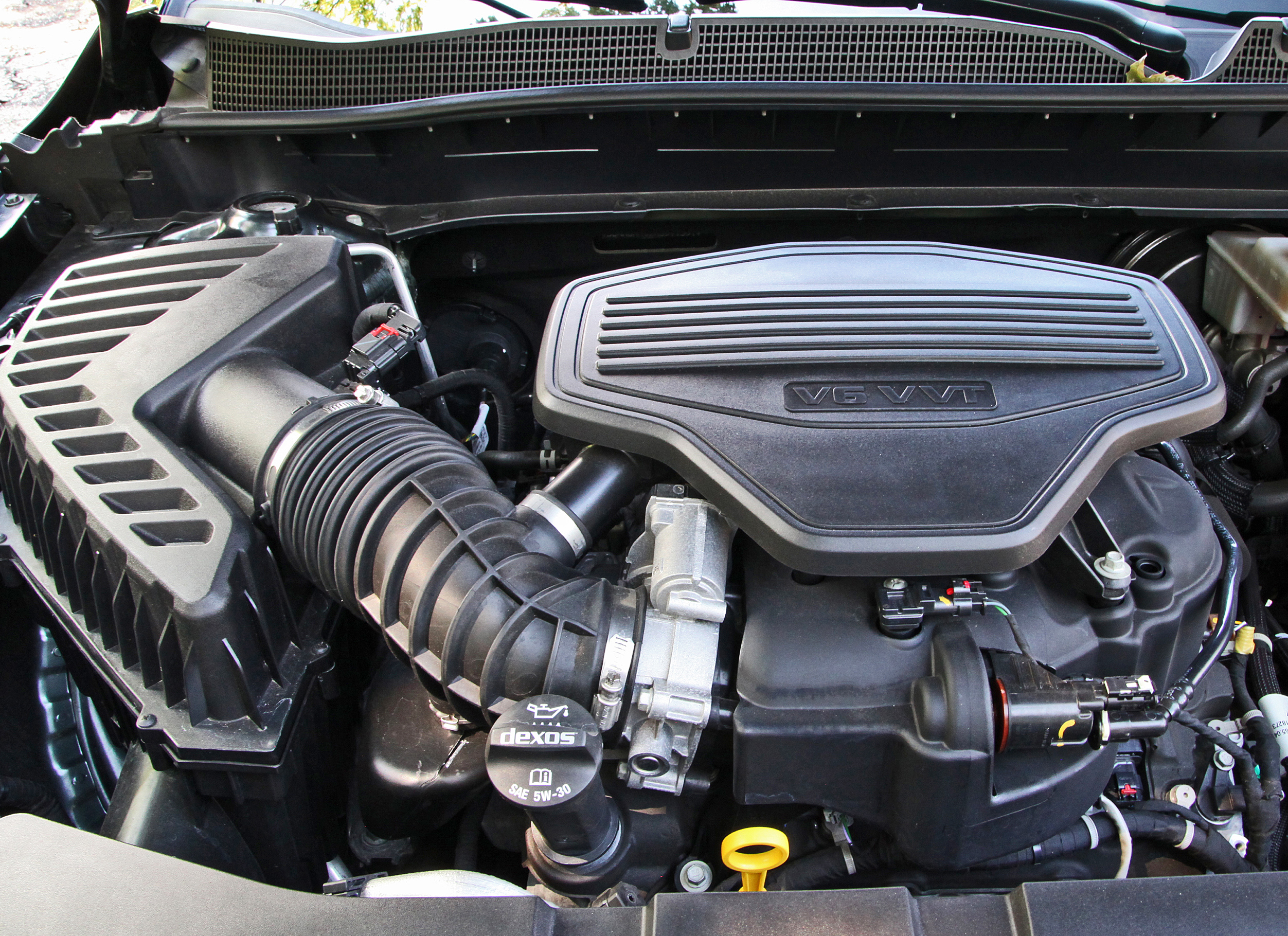 The Blazer’s 3.6-liter V6 engine puts out a healthy 308 horsepower, and is paired with an alert, smooth-shifting 9-speed automatic transmission.

Though not overtly sporty, the Blazer has a frisky nature, though enthusiast drivers will likely find its steering a little too light and lacking in feedback. One Blazer strong point is quietness. Virtually no highway wind noise makes its way inside the cabin, though highway patter can be heard on some surfaces, and may be exacerbated by the 21-inch wheels. There’s plenty of passenger space in both seating rows, and the seats themselves, at least up front, provide plenty of long-trip support. Outward visibility is generally good, though the Blazer’s thick rear roof pillars compromise the view to the rear corners.

The Chevrolet Infotainment 3 system is among the industry’s simplest-to-navigate multimedia interfaces. Though Apple CarPlay and Android Auto are available, the system works nicely on its own terms, and requires the fewest buttons and touchscreen icons of any vehicle we’ve seen lately. In-cabin 4G LTE Wi-Fi is also available, though it requires a data subscription.

It’s easy to argue that the Blazer gives up too much practicality in the name of style, but it’s just as easy to assert that this driver-indulgent crossover is a true reflection of how many consumers actually use their vehicles. It’s nice to have the cargo space there when you need it, but it’s also nice to drive a stylish, well-equipped vehicle when you don’t.

Though the Blazer will never make Consumer Guide’s Best Buy list—it’s just a little too pricey and a little shy on cargo space—we see the appeal. And if this personal-luxury formula works for you, take a Blazer for a test drive. See if you don’t agree that Monte Carlo might have been a better model name.

There are some curious contradictions to Chevrolet’s all-new old-name crossover SUV. 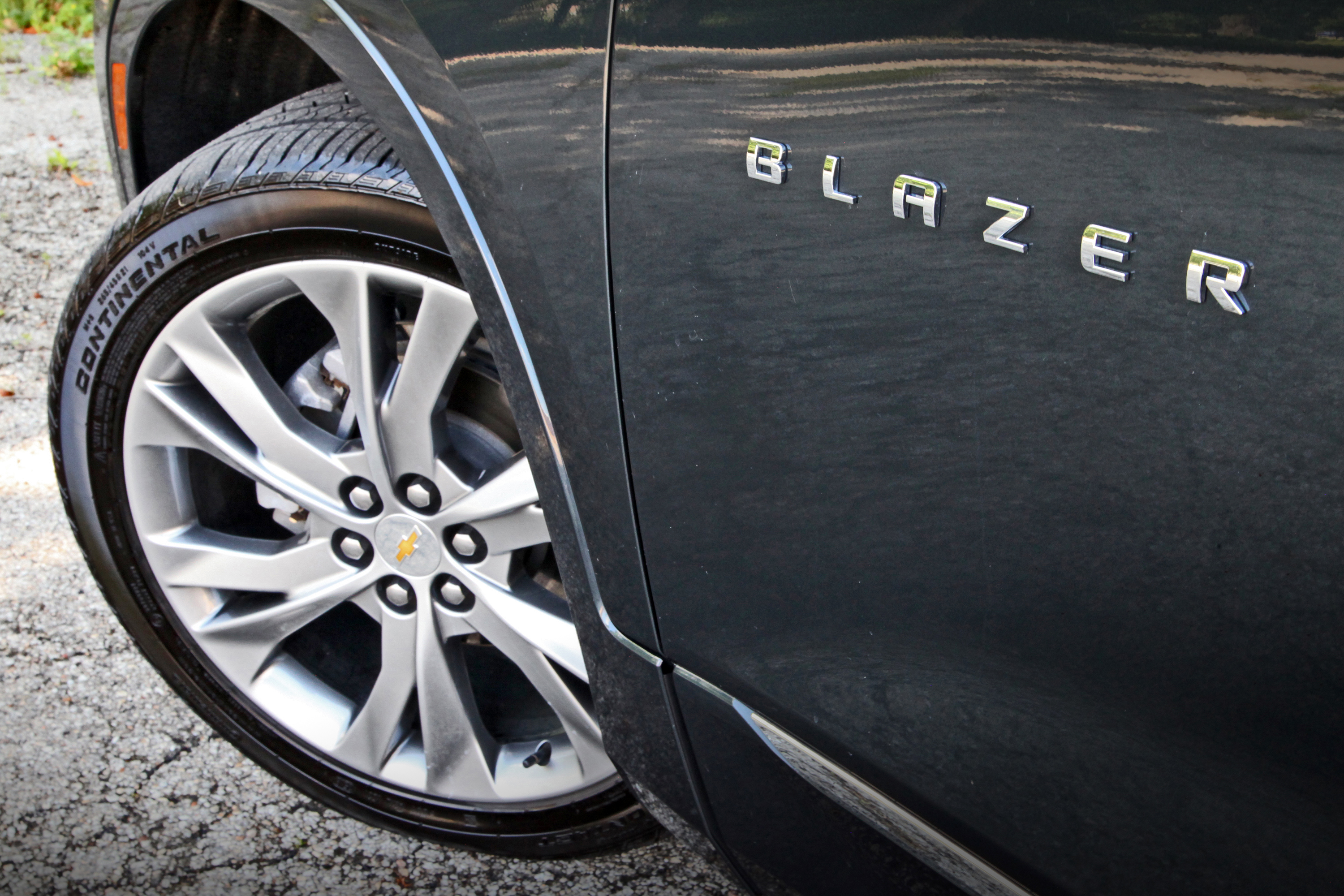 Cargo space isn’t as ample as the vehicle’s size might imply, but there are a number of aids to using the space that’s there. Consider the adjustable cargo fence in tracks on the load floor, cubbies for incidentals in the rear corners, underfloor space in an organizer around the spare tire, and rear seats that fold absolutely flat (though they leave a tiny gap from the load floor).

The interior uses materials that are nice but not genuinely plush, even in the line-topping Premier. There are soft surfaces on the dash top, armrests, and door centers, but press on the door tops and you’ll find no underlying give—not even on the front doors, and all but the strippiest of strippers provide at least that. On the other hand, the test truck had standard ventilated front and heated rear seats, a heated steering wheel, and a Wi-Fi hot spot, features that even some 6-figure luxury vehicles charge extra for (which is how they get to be 6-figure luxury vehicles).

Interior room is good, but this was the first vehicle that I drove in a long time that left me with the distinct impression that the steering wheel wasn’t facing me straight. Driving instruments are colorful and legible; the infotainment system is easy to operate; and climate controls have handy dials to set temperature, but everything else is controlled by a long row of small buttons that are hard to read at a glance. Ride is quiet with no tendency to waggle or wallow, even in speedier lane changes, it and does a nice job of resisting being jolted by potholes. However, steering is a little loose and lacking in feel.

The available eager V6, passenger room, and roster of features make the new Blazer a worthy consideration in its class—just maybe not for perfectionists. 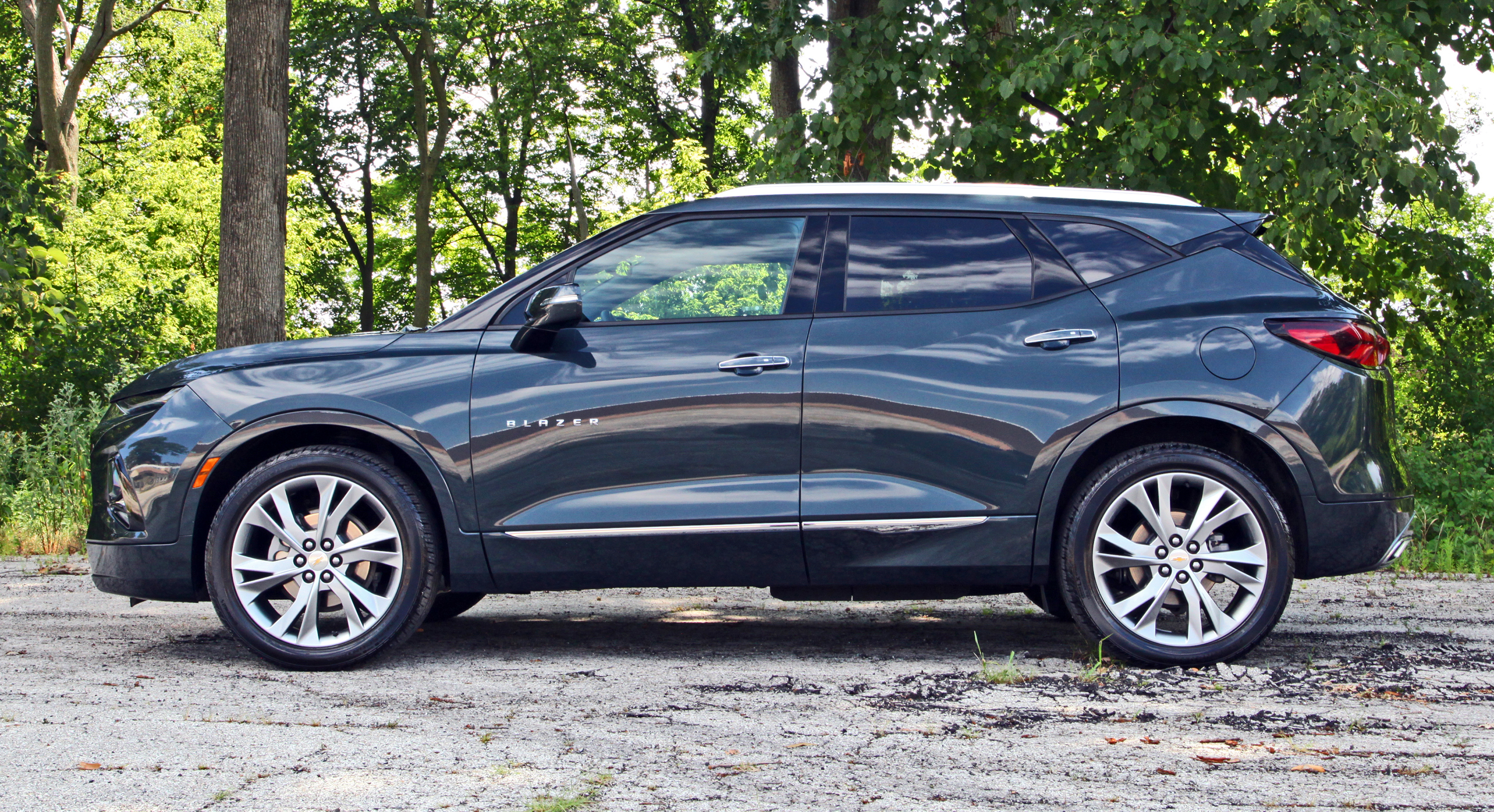 The revived-for-2019 Chevrolet Blazer eschews some traditional SUV selling points–most notably cargo space–in favor of rakish styling and a sportier driving personality than the norm. Opting for the available 308-hp 3.6-liter V6 in place of the base 193-hp 2.5-liter 4-cylinder makes for gutsier acceleration, but higher-line Blazer models get pricey rather quickly… and don’t come standard with some safety features that are included even on rivals’ base models.