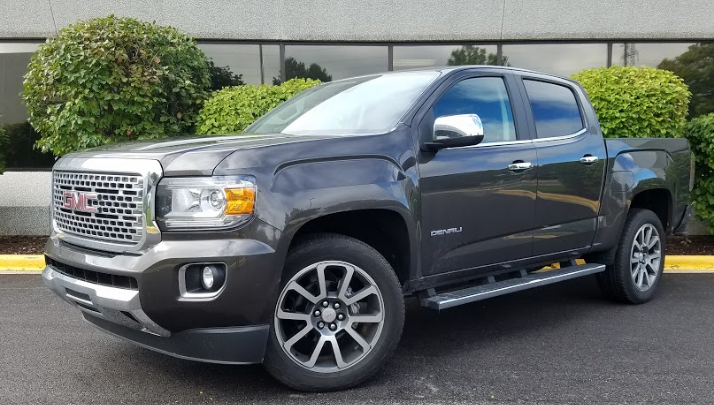 The not so good: Bouncy ride, some controls require a long reach

After years of decline, the compact-pickup class has recently reversed course. Among the first to re-join the stalwart Nissan Frontier and Toyota Tacoma were the Chevrolet Colorado and similar GMC Canyon, which returned to the market for 2015 after a three-year absence. Honda’s Ridgeline retreated after 2015 to return in 2017, and Ford’s Ranger made a similar reappearance, this one for 2019 after a seven-year hiatus. And if recent auto-show concepts are any indication, more are on the way. 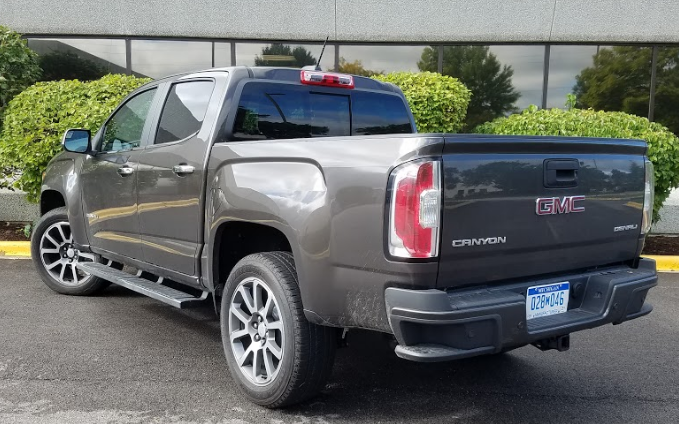 Although the step-up into the interior isn’t that high, shorter folks may find the running boards fitted to our test truck to be a valuable addition. Although our tester had a 5-foot bed, a 6-footer is also available.

Back in 2016, we tested the Canyon’s Chevrolet Colorado sibling but in a lower trim level and with the then-new Duramax turbodiesel engine. This Canyon represents a more typical example: a 4WD Crew Cab with the 3.6-liter V6. Less typical, however, is that it was a line-topping Denali, though throughout the GMC lineup, Denalis make up a surprisingly large percentage of sales.

Most elements fit the upscale Denali image, but a few didn’t. Among the latter was a bouncy, rather abrupt ride, a victim of a stiffish suspension and large, heavy wheels and tires. It was particularly noticeable on the rough roads surrounding our Chicagoland headquarters; on smoother roads, it probably wouldn’t stand out as much.

But that was made up for by the powertrain. Under the hood was GM’s widely used 3.6-liter V6 — here making 308 horsepower — backed by an 8-speed automatic transmission. Standard on Denali is Autotrac 4WD, which is a full-time system that includes low-range gearing for off-road work. As such, it’s unique among compact pickups. All others have only a part-time 4WD system — which isn’t supposed to be left engaged on dry pavement — except for the Honda Ridgeline, which offers full-time all-wheel drive, but it doesn’t include low-range gearing. So the Canyon scores points here.

In rear-wheel drive, the Canyon stopped our timer at 6.8 seconds in the 0-60 dash — an impressive showing. But switching to Auto 4WD dropped that to an even more impressive 6.55 seconds by eliminating some wheel spin off the line.

It also scores points for acceleration. Left in rear-wheel drive (which remember, you don’t have to do), our timer clocked the Denali at a brisk 6.80 seconds 0-60. But in Auto 4WD, that dropped to 6.55 seconds due to less wheel spin off the line. And indeed, the truck really jumped off the line, with the transmission doing its part by supplying quick kickdowns when the throttle was stabbed while underway.

Accommodations are a mixed bag. There’s loads of passenger room in front along with fine storage space thanks to a good-size glovebox, decent console box, a forward console bin under Aux/SD card/2 USB/12-volt plugs, the usual two cupholders, a tiny but handy dash bin and credit-card slot, and upper-door bins with map pockets/cupholders beneath. Visibility is OK to the front and rear corners but poor to the sides, and a tall tailgate forces you to use the rearview camera when backing. Materials may not quite match the price — for instance, the door tops are unpadded — but there are some really nice touches here. Room in back is fine for adults; only behind a really tall front-seater will legroom be scarce, and a middle-seater only has a small driveline hump to contend with. There’s a small storage bin under the seat, the seat back folds flat to form a level carrying surface, and there’s a fold-down armrest with cupholders and two USB/12-volt plugs. 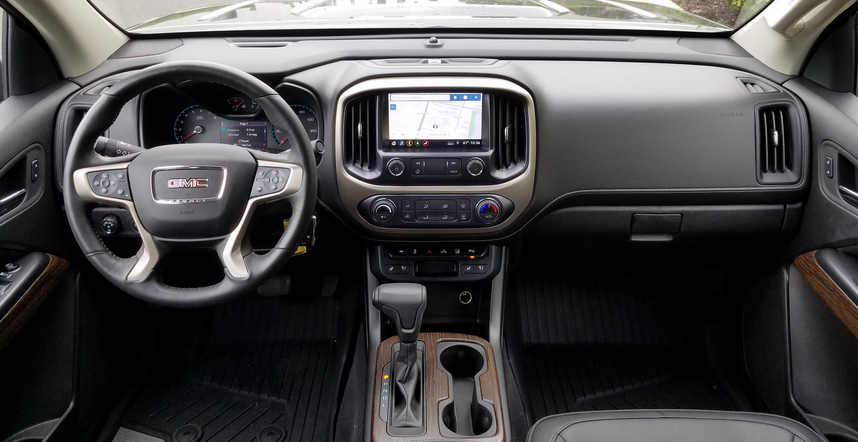 It’s certainly nice inside the Denali, if perhaps a bit shy of $44,000 worth of “nice.” But it also boasts very good passenger and storage space and a fairly easy-to-use control layout.

The control layout is good overall but with some caveats. While the touchscreen is large and augmented with volume and tuning knobs, it’s a bit of a reach, but it’s easy enough to decipher and you can mix different bands (AM/FM/satellite) within your “Favorites” — a nice touch. Climate controls consist of individual mode buttons and rotary fan and temperature knobs — a good thing — but the last, quite oddly, is far to the right and a stretch away. (Though really easy for the passenger to adjust.) 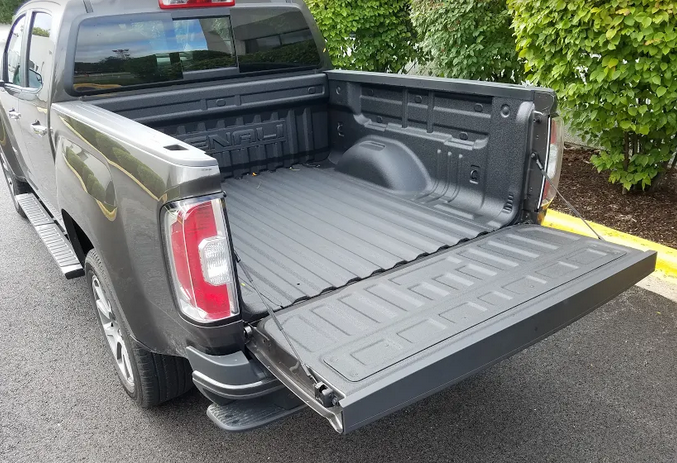 Besides the damped tailgate, bumper-corner steps, and sliding rear window — all appreciated — there’s nothing trend-setting about the Canyon’s cargo-carrying capability. Although our crew-cab tester was fitted with a 5-foot bed, a 6-footer is also available — something that isn’t offered on the competing Honda Ridgeline.

With all that’s “going on” with cargo beds in large pickups — including the CarbonPro bed and Multi-Pro tailgate in full-size GMC Sierras — this one is nothing special. There’s a damped tailgate and steps built into the rear-bumper corners, but those don’t qualify as “special” in this day and age. Among compact-pickup beds, only the Honda Ridgeline’s stands out for features.

Although the Denali comes with some true luxury appointments — including heated and ventilated leather front seats with power lumbar adjustment (for both driver and front passenger), a heated steering wheel, Apple CarPlay/Android Auto, and a WiFi hotspot — it’s not overstocked with safety features. Oh, it has the basics in terms of “high-tech” items, including forward collision warning and lane-departure warning and even rear-obstacle detection, yet most current vehicles offer more.

But with its available full-time 4WD and powerful V6 engine, the Canyon has a lot going for it, and offers an extended-cab version and available 6-foot bed that can’t be had on the competing Honda Ridgeline. All of which is reason enough to make the Canyon — along with its Colorado cousin and the Ridgeline — our Best Buys in the compact-pickup class.

Although $46,000 may sound like a lot for a compact pickup, this is a lot of compact pickup. And as this Denali is the top-line model, others can be had for a lot less while still benefitting from many of its features.