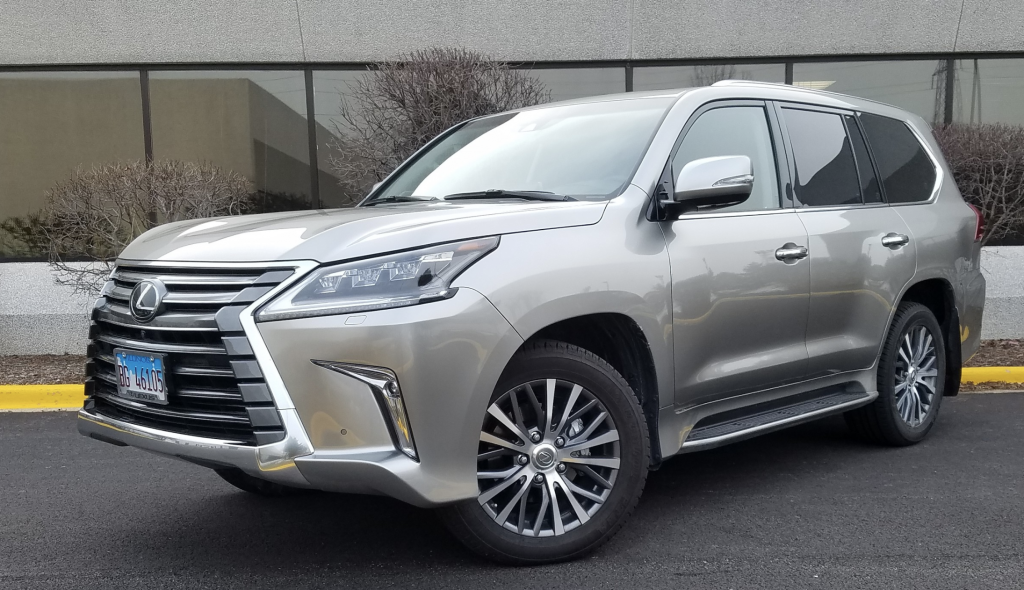 The not so good: Fuel economy, interior space efficiency

In most of the segments in which Lexus competes, its offerings are typically among the most popular. That doesn’t hold, however, for its premium large SUV.

In a class of just 10 entries that contains everything from upscale cruisers to high-performance hot rods to fuel-saving hybrids and diesels, the Lexus LX 570 is one of the most deliberately old school, off-road-oriented members of its class. 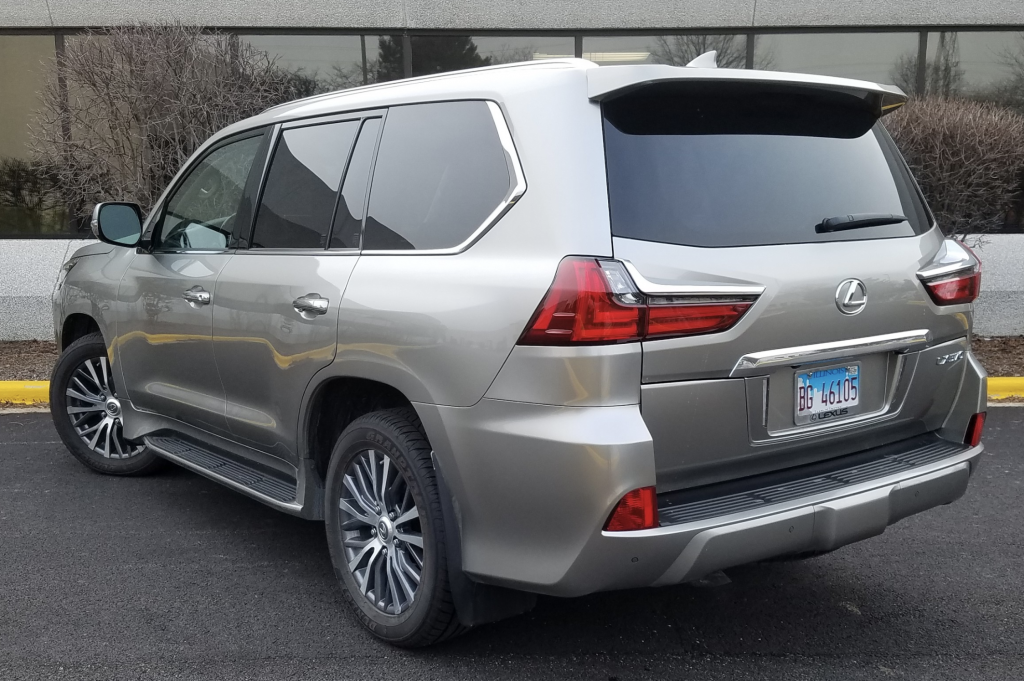 Built on a truck-type frame with a big V8 under the hood, the LX 570 comes off as rather “old school” as large SUVs go — though it’s certainly not the only one. Off-road capability and good power (enough to tow 7000 lbs.) are positive by-products, but space efficiency and fuel economy are the trade-offs. The unusual tailgate is split into upper and lower halves (the seam being right above the license plate), which some buyers may find to be a plus.

The LX is more off-road capable than many of its class competitors, and its potent 5.7-liter V8 gives it strong acceleration. But it doesn’t feel as modern as its rivals, and it sure can’t be considered “thrifty.”

And though it can seat up to eight passengers – ranking it with the best in this class – seating space isn’t all that great. The second-row seats are respectably roomy, but the front-seat area isn’t quite as spacious–or as ergonomically agreeable–as most class competitors’. Our test vehicle wasn’t fitted with the optional third row, but one tested a couple years ago was, and it demonstrated that it was best used for children due to tough access and a knees-up seating position for adults. Furthermore, there was very little cargo space behind the deployed seats, and when folded, they set up against the side walls, greatly restricting cargo-area width. And even in our five-passenger tester, there was no additional storage space under the cargo floor. “Packaging” isn’t an LX 570 strong point.

Cargo space is ample, and though there’s no under-floor storage, there are a couple tiny compartments in the unusual fold-down tailgate — one of which holds a handy little tool kit.

For reference, this is a 2017 LX 570 fitted with the third-row seat. The two halves fold up against the side walls, which not only blocks some view to the rear corners, but eats up some cargo-area width. And there’s not much room left behind them when they’re deployed — which is probably why Lexus made them optional for 2018 … and again in 2019.

Speaking of “one tested a couple years ago,” we invite you to read that review of a similar 2017 Lexus LX 570 3-row model for more insights, as here we’ll concentrate on the tested 2019 2-row version.

The 2-row LX model was first offered midway through the 2018 model year, paring $5000 from the previous price of entry. Newly available LX features for 2019 include LX-logo puddle lamps and Amazon Alexa compatibility, and 2-row versions can now be had with the Luxury Package (which includes Semi Aniline Leather-trimmed interior, heated and ventilated front and second-row seats, 4-zone climate control, and the new puddle lamps), 21-inch wheels, and heated steering wheel options previously reserved for the 3-row version. Our 2-row tester was equipped with two of the three, lacking only the 21-inch wheels. But it still can’t be had with 3-row exclusives such as a head-up display, Mark Levinson sound system, Qi wireless charging, or “Cool Box” center-console cooler.

The LX’s luxurious, understated cabin boasts high-quality materials and excellent fit and finish. Though we doubt that many LX owners will use the full extent of their vehicles’ capabilities, there’s some serious off-road-oriented equipment here — such as low-range transfer-case gearing, five different traction settings for different surfaces, and Crawl Control (a driver-assist feature that maintains a steady pace to optimize traction over rugged terrain).

It’s certainly ritzy enough inside, but there’s little outside-shoulder room in front, and not as much legroom as really tall drivers might want. There’s a huge dashboard screen, but it’s not a touchscreen; you move a pointer around with a console control knob, which isn’t a method favored by our staff. Much appreciated, however, are the console buttons that allow activation of various elements with one simple press.

Although we’ve never been particularly fond of the Lexus control layout — which uses a console-mounted “puck” to move a pointer around the huge non-touch dashboard screen — the LX includes a number of handy and easy-to-use console buttons and flippers to control such things as the heated/ventilated front seats, heated steering wheel, off-road and 4×4 settings, and ride-height adjustment, the last of which allows for lowering the vehicle about three inches to ease entry and exit. The rear seat — which is spacious enough to seat three adults across — has its own heated seat and climate controls in a flip-down armrest (which can’t be deployed with a center-seater in place.) And although we appreciated the wide-angle (180-degree) rearview camera and 360-degree cameras, views have to be selected by using the console puck (rather than by simply pressing a “button” on the dash screen), an annoyance.

The LX is a big SUV, and it never really feels like anything but. You sit up high with the hood and fenders blocking your view of nearby cars (a bit scary when trying to slot it into a parking space). The steering feels both slow and heavy during low-speed maneuvers, and you have to deliberately center it after turns. But the ride is quite composed for an SUV, and it offers plenty of power, with the only caveat being that flooring the throttle from speed results in a noticeable 2-step downshift that delays the strong response that comes after. 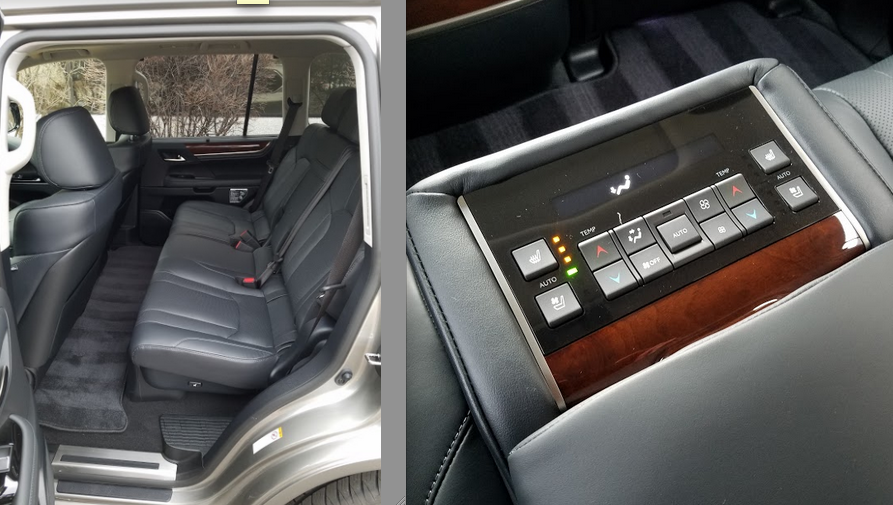 Room is quite good in the second row, with expansive width and a flat floor aiding 3-across seating. Folding down the armrest reveals separate climate controls (part of the Luxury Package) and those for the heated and ventilated seats.

One of our drivers complained that the throttle pedal required a long stroke before power came in, and also that the stroke didn’t seem to match the stroke of his foot, making for awkward movement. And a couple noticed the brakes seemed to grab just before coming to a complete stop. Also, we averaged just 13.8 mpg in 60 percent highway driving, with a couple of city stints hovering at 10 mpg — and that’s on the required premium-grade fuel.

In some ways, the LX 570 is an anachronism, being based on a truck-type body-on-frame layout rather than a carlike platform, with a tall build and thirsty V8 engine. And as alluded to up top, it doesn’t account for a very big piece of the Premium Large SUV pie. Last month, Lexus moved just 411 examples, roughly one-quarter the volume of the Cadillac Escalade, Lincoln Navigator, Mercedes-Benz GLS, Land Rover Range Rover, and its similar but slightly smaller GX 460 brother, one-fifth the number of Audi Q7s … and one seventeenth as many as its midsize car-based sibling, the Lexus RX. But on the plus side, that means you’ll likely have the only one in the country-club parking lot.

The Lexus LX 570 is difficult to summarize in any quantitative fashion. It is not as roomy nor as efficient as other large luxury SUVs, nor is it as modern. That said, the LX offers drivers a rare sense of solidity and craftsmanship.

The clubby cabin is understated almost to a fault, yet the assembly quality is reminiscent of Mercedes-Benz products from the Eighties. Ride quality is sublime, as is cabin quietness.

Additionally, the LX’s arsenal of legitimate 4WD hardware imbues drivers with the sort of foul-weather confidence normally reserved for vehicles built by Land Rover. Having driven a LX through deep snow, I can vouch for its winter credentials.

Like most luxury vehicle purchases, buying an LX 570 is something motivated more by emotion than practicality. That said, to the right buyer, the LX exudes cool confidence, and I completely get that.

Like some others in the Premium Large SUV segment, the LX 570 stands out by being big, brawny, and classy. Unlike some others, it also stands out for being rare — which some might feel is another point in its favor.