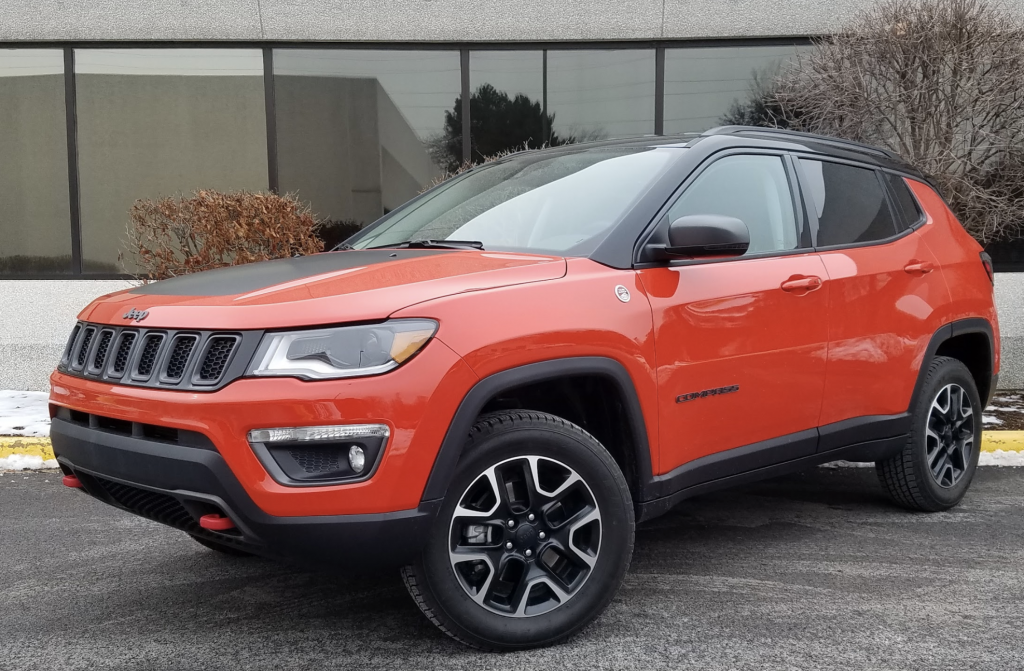 The not so good: Automatic-transmission performance, visibility, climate-control placement

Compass is the smallest of three Jeeps competing in the popular compact-crossover class, the others being the venerable Wrangler and long-running Cherokee – both unusual in the segment in that they offer a V6 engine, which the Compass doesn’t. 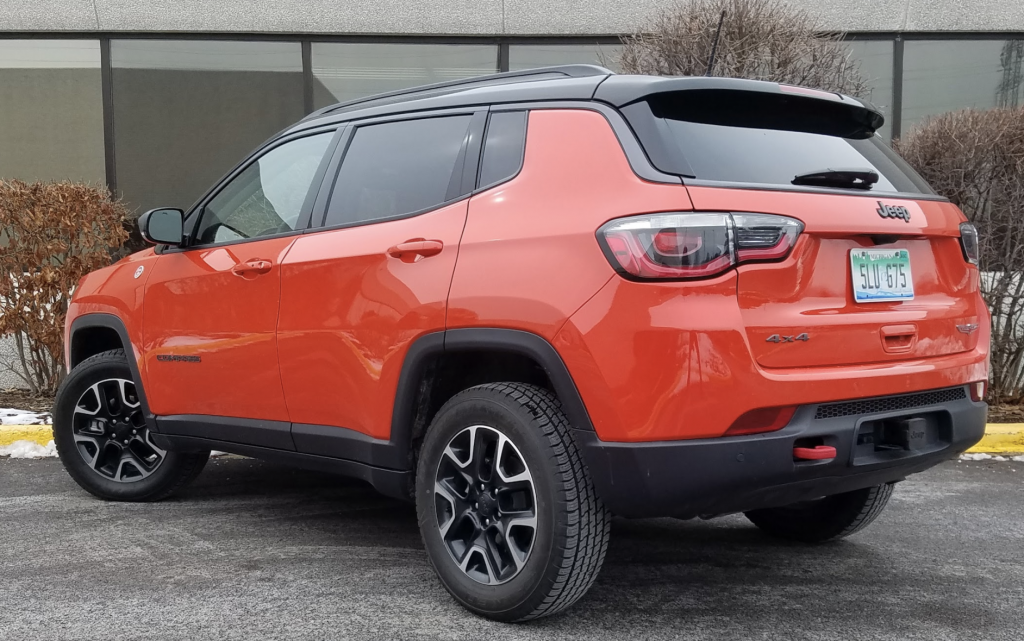 Trailhawk boasts a slightly higher ride height than other Compass models, along with a host of unique off-road features. The ride quality was quite impressive, something that usually isn’t the case with off-roaders.

Instead, Compass relies solely on a 180-horsepower 2.4-liter 4-cylinder engine. However, transmission choices include a standard 6-speed manual (a rare offering in the class) with a 6-speed automatic available with front-wheel drive, a 9-speed automatic with 4WD. The off-road-oriented Trailhawk comes standard with the 9-speed automatic and 4WD, and also comes with a 2-speed transfer case with low-range gearing and 4WD Lock for heavy-duty off-road work, along with a raised ride height. It also includes other off-road features such as hill start assist, hill descent control, skid plates, tow hooks, and a Select Terrain System with different traction-control settings for snow, sand, mud, and rock.

The Trailhawk badge on the liftgate and Trail Rated badge on the front fenders are your clues that this is the “serious” off-road version of the Compass.

While off-road prowess is certainly a Trailhawk strength, the powertrain in ours wasn’t. The 9-speed automatic fitted to our Trailhawk (and some other Jeeps) isn’t one of our favorites, as it has very delayed kickdowns at certain speeds when you stab the throttle – particularly when it’s just partway – and in this case, at least, also seemed to provide slightly jerky response in on/off throttle transitions, such as when rounding corners. It didn’t really impress in terms of acceleration or fuel economy, either, as we averaged 9.78 seconds in the 0-60 sprint and 20.2 mpg in a 50/50 mix of city/highway driving – the latter somewhat below its 25 mpg combined EPA rating. The engine was also quite vocal under acceleration.

Where the Trailhawk did impress, however, was in ride quality – and that’s unusual for an off-road vehicle. It absorbed both small and large bumps with aplomb, the drawback being that the softish suspension and tall ride height combined for a slightly tipsy feel in corners and a bit of side-to-side tipping over some road irregularities. But on Chicagoland’s pockmarked streets, the ride comfort was an unexpected pleasure.

Less pleasurable around town was the restricted visibility. Thick roof pillars block a lot of the view out just about anywhere you look, and the rearview camera would have been more helpful when backing if it gave a wider-angle view. 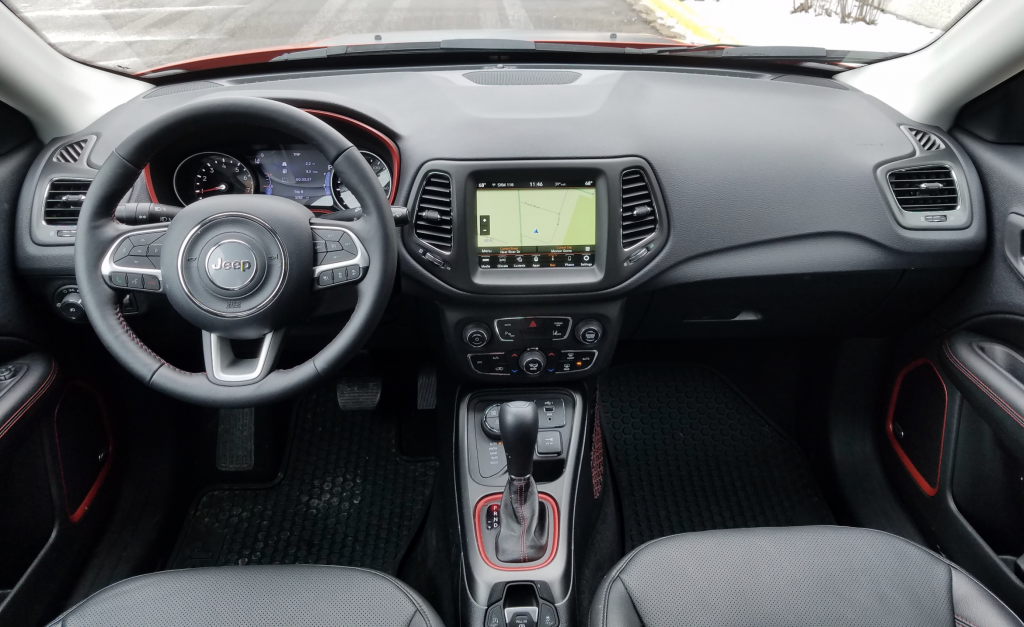 Lots of padded surfaces and orange accents impressed inside. However, the screen is mounted a bit low and vertical, which makes it tougher to see, and the recessed climate controls below it were awkward to adjust.

While we’re generally fans of the UConnect infotainment interface used in most Chrysler/Dodge/Jeep/Ram vehicles (meaningful, because we’re not fans of some others), the screen here was mounted rather low and vertical, making it a little difficult to see. Climate controls were likewise low and thus a little difficult to adjust, and mode selection has to be done in multiple steps through the touchscreen, which is also used to adjust heated seat and steering-wheel settings.

There are numerous padded “touch” surfaces inside, though some don’t offer much cushioning. Our Trailhawk boasted some orange accents that helped brighten a nearly all-black interior. Cabin storage consists of a large glovebox, small console box devoid of plugs, two cupholders, a small forward console bin under Aux/USB/12-volt plugs, and small map pockets with cupholders in the doors – adequate, but perhaps slightly below par for the class.

A couple of things impressed us in the seating department. Included in the $595 Luxury Seat Group were a power driver seat with memory that can be raised very high – a boon to shorter folks – along with a power passenger seat, with both offering ventilation and adjustable lumbar support – the last a rare nicety for the passenger in this class (and most others, in fact). The $1795 Leather Interior Group added leather upholstery, heated front seats and steering wheel, wiper de-icers, auto-dimming rearview mirror, and remote start.

Front legroom is just OK, though headroom is fine. Headroom is fine in back as well – 6-footers should fit – and a low floor hump means a center-seater has decent foot space. The ride height is such that entry and exit should be easy for most folks. 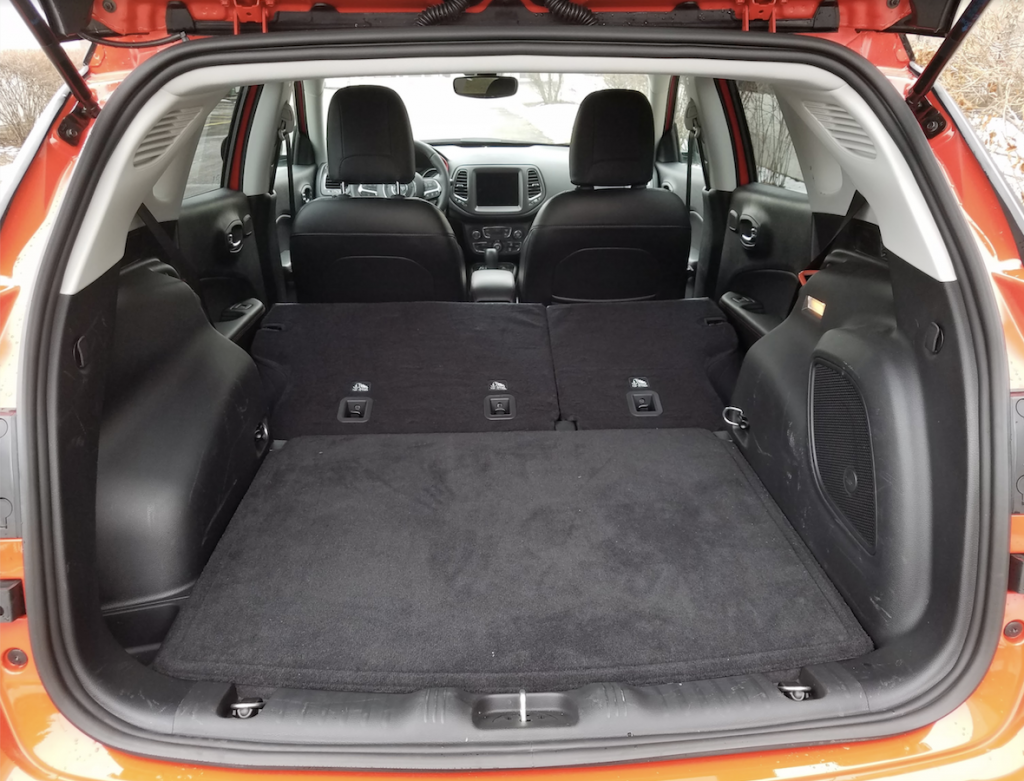 There’s a good amount of cargo space in back, but the seat backs rest about two inches below the level of the cargo floor (possibly due to the Trailhawk’s full-size spare tire beneath the floor raising it a bit), though that’s better than having them rest above floor level. There’s just a bit of underfloor space around the spare tire.

The cargo area offers a good amount of space, along with a pocket along the left wall and a bit of “unofficial” space around the spare tire under the floor. But that spare tire – perhaps due to being larger on the Trailhawk – prevented the two-tier floor from being set at its lower position, which left the floor resting about two inches above the level of the folded rear seat backs. (Usually – if they’re not flush – it’s the other way around, which is worse because it makes it tough to slide long items forward.)

While our Trailhawk came reasonably well equipped at its $31,170 starting price (including the $1495 destination charge), most buyers would want to add some options – though perhaps not the $7260 worth added to our tester.

For one thing, the Trailhawk is light on standard high-tech safety features. A fairly comprehensive list of them is offered, though they’re split between two option packages. The $945 Advance Safety Group brings forward collision warning and automatic emergency braking, lane-departure warning and mitigation, full-speed adaptive cruise control with stop & go, and automatic high beams. But you have to add the $795 Safety and Security Group to get blind-spot and rear cross traffic alert, though it also brings rear obstacle detection and rain-sensing wipers.

While the iconic Wrangler is undoubtedly the star of Jeep’s compact-crossover trio – if not the whole Jeep brand – its fellow compacts get to bask in its glow. The Jeep brand name is among the strongest in the business, and just having those letters on its sheetmetal adds a certain amount of “off-road cred” to a Compass that has quite a lot of it already.

With its legendary Jeep nameplate, the Compass should be more popular than it is. But it has some detriments that reduce its appeal on the street, though in Trailhawk form, it makes up for that when off-road.