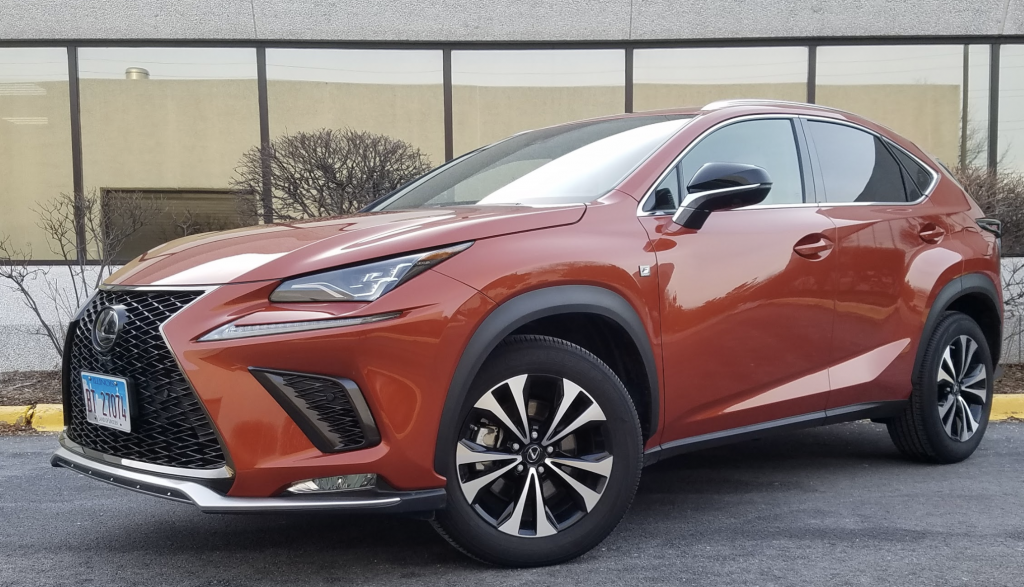 The good: Decent interior space with upscale materials and feel

The not so good: Touchpad infotainment interface can be distracting to use

As loaded and luxurious as you can equip “regular” vehicles these days, it’s getting harder and harder to justify the premium ones. But in the compact-crossover category, the premium Lexus NX 300 is perhaps more justifiable than most. 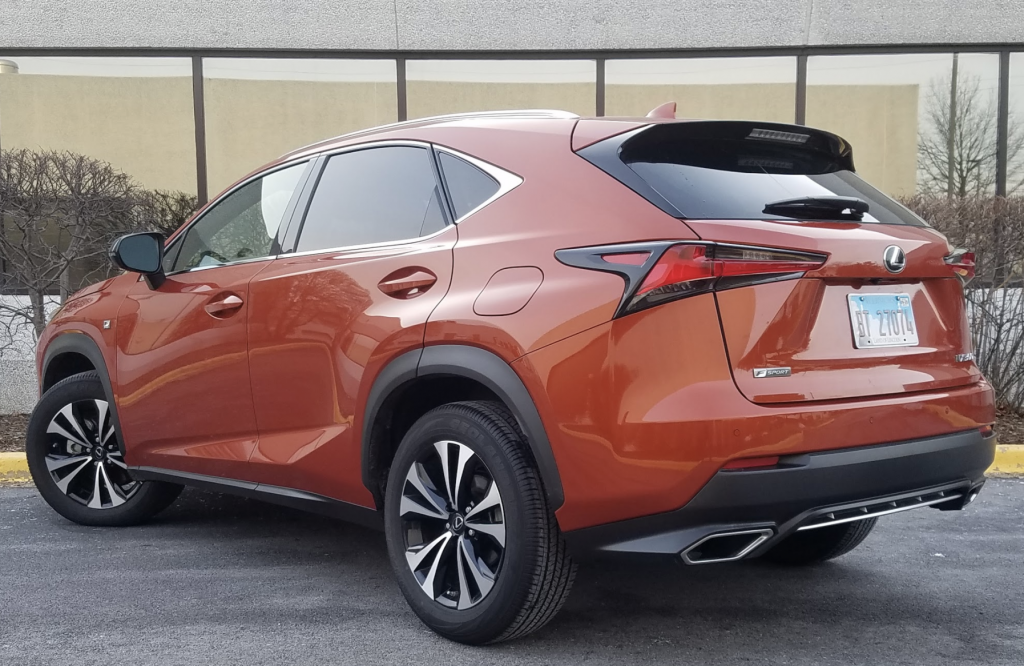 Part of that, of course, comes from its upscale Lexus nameplate. But much is also due to the fact that its starting price of less than $38,000 (including destination) means it’s positioned only about two grand north of sister-division Toyota’s top-line RAV4 Limited.

The vehicle we tested, however, was the sporty F Sport version of the NX 300 in all-wheel-drive form that started at a still-reasonable $41,385. Added were more than $10,000 in options, some perhaps not necessary, a couple that seemingly should be standard, but none being wildly overpriced (as is too often the case with premium vehicles). Most notable here were the $125 auto-dimming rearview mirror with Homelink (should just be standard), $400 power rear liftgate (reasonable), $535 Intuitive Parking Assist obstacle detection with Auto Braking (ditto), $800 Panoramic View 360-degree Backup Monitor (ditto again), and the $2865 Premium F Sport Package with heated and ventilated front seats, blind-spot and rear cross traffic alert, driver-seat memory, and power sunroof (a mix of “should be standard” and “reasonable”). The biggest chunk — $2920 – went to a navigation/Mark Levinson audio system with 10.3-inch non-touch display screen.

Among compact crossovers, premium ones are often available with more-powerful engines – typically turbocharged – and that’s the case here. Whereas the Toyota RAV4 has a 203-horsepower 2.5-liter 4-cylinder, the NX 300 gets a 235-horsepower 2.0-liter turbo four. Also, the RAV4’s is mated to a CVT automatic transmission, the NX 300’s to an 8-speed automatic. (Both are also offered in Hybrid versions, with the RAV4’s gaining power, the NX 300h’s losing some.)

What the NX 300’s premium powertrain nets you is a pretty decent full-throttle launch with power that builds quickly in typical turbo fashion, along with quick kickdowns when the throttle is stabbed at speed. But it also only netted us 19.3 mpg in 65 percent city driving — not great, and not even up to the 22-mpg EPA city rating.

One of the options fitted to our test vehicle was an Adaptable Variable Suspension. F Sports come standard with a sport-tuned suspension, so whether this was worth its $770 cost might be in question, but it did provide for a nice ride/handling combination over our pockmarked Chicagoland streets.

With dynamics out of the way, we get to other elements that might separate premium vehicles from their less-costly siblings. For the most part, that’s going to mean interior ambience and features.

The interior is nicely trimmed with rich materials, and our tester had two-tone upholstery. A touchpad kitty-corner from the console cupholders moves a cursor around the 10.3-inch non-touch dash screen (hardly our favorite set-up due to the amount of attention it distracts), but at least the NX also had volume and tuning knobs — and a CD player.

The NX 300 F Sport we tested came with a nicely appointed two-tone interior and most features you’d expect in a vehicle of this price. Premium items that stand out include a power tilt/telescopic steering wheel (nicer when augmented with the memory system found in the $2865 Premium F Sport Package), power driver seat with tilt cushion and lumbar adjustment, all-speed adaptive cruise control, Lexus Enform Safety Connect, Lexus Enform Remote, and road-sign assist. Apple CarPlay and Alexa compatibility is included, but not Android Auto. Also found on the F Sport are a heated steering wheel, NuLuxe (man-made “leather”) upholstery, and cornering lamps (a great help), along with a host of sporty trim pieces. 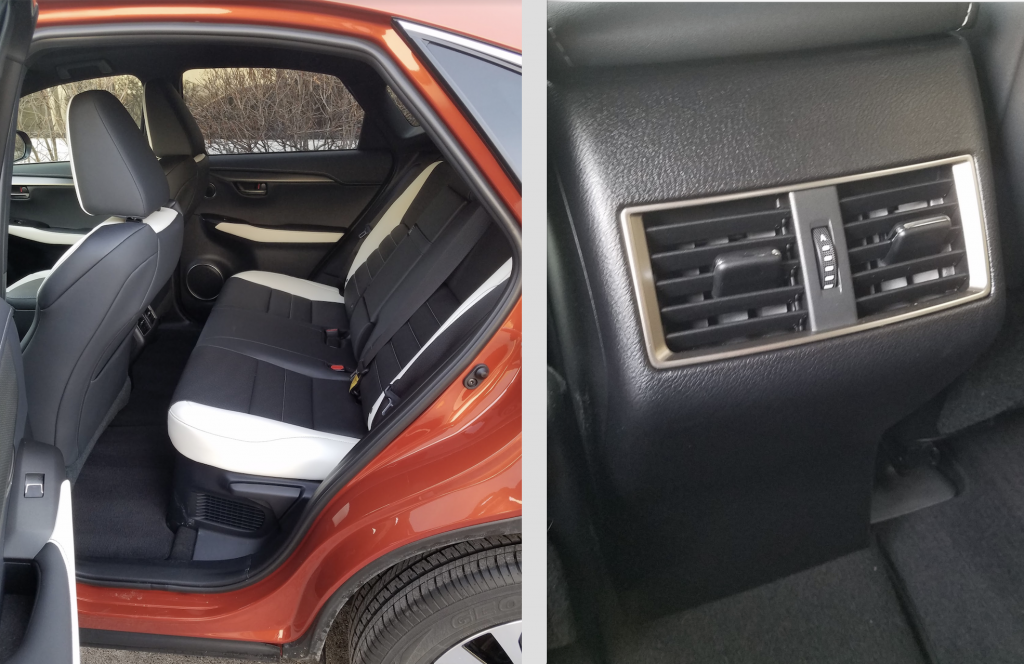 There’s 6-footer headroom in back, and an average-size adult should find enough legroom even if the seat ahead is moved all the way rearward. Rear-seat occupants get vents and a nearly flat floor, the latter an aid to center-seater foot space.

One reason buyers have migrated from cars to crossovers is space. The NX offers good room in the front row, with the rear-seat area boasting 6-footer headroom, and my 5’9 frame could fit behind a front seat moved all the way back. The seat back reclines, the floor is nearly flat to afford foot room for a center-seater, and the ride height provides for easy entry and exit. There are climate vents on the back of the console, but disappointingly, no power plugs. Visibility is OK to the front, fair to the sides, but poor to the rear, though our tester had a 180-degree wide-angle rearview camera and neat 360-degree “rotating view” cameras that help when backing or in close quarters. There’s a good amount of interior storage along with 12-volt/Aux/2 USB plugs. However, the NX 300 carries the same touchpad-based/non-touch-screen infotainment controls as other Lexus models, never one of our favorites, but at least it had volume and tuning knobs (a huge help) and – quite unusually any more – a CD player. Interior materials are subdued, but nice enough for the price.

Rear seats fold level with the cargo floor, and there’s a good amount of hidden storage under the floor.

The cargo area is fairly wide at the rear, the seat backs fold flat, and there’s a fair amount of hidden storage space under the floor. Our tester had a power liftgate, a $400 option.

So what do you get for your “premium” money? Well, the extra power of a 2.0-liter turbocharged engine isn’t common among lower-cost compact crossovers. Nor are the power tilt/telescopic steering column with available memory (great when two people share the vehicle), 360-degree camera, front cornering lights, heated and ventilated front seats (at least the latter), driver seat with extendable cushion and lumbar adjustment (at least the former), Intuitive Parking Assist obstacle detection with Auto Braking, or the CD player. However, let’s face it; for many, the real draw is the upscale image presented by the prestigious Lexus nameplate. But at least it’s not the only draw … and it didn’t really cost that much to get it.

As premium compact crossovers go, the Lexus NX starts at the lower end of the price scale, but like many others, can add a lot in options. But as long as you place value on a premium nameplate, the NX justifies its price quite well, with satisfying dynamics, decent passenger and cargo space, and ritzy accommodations.