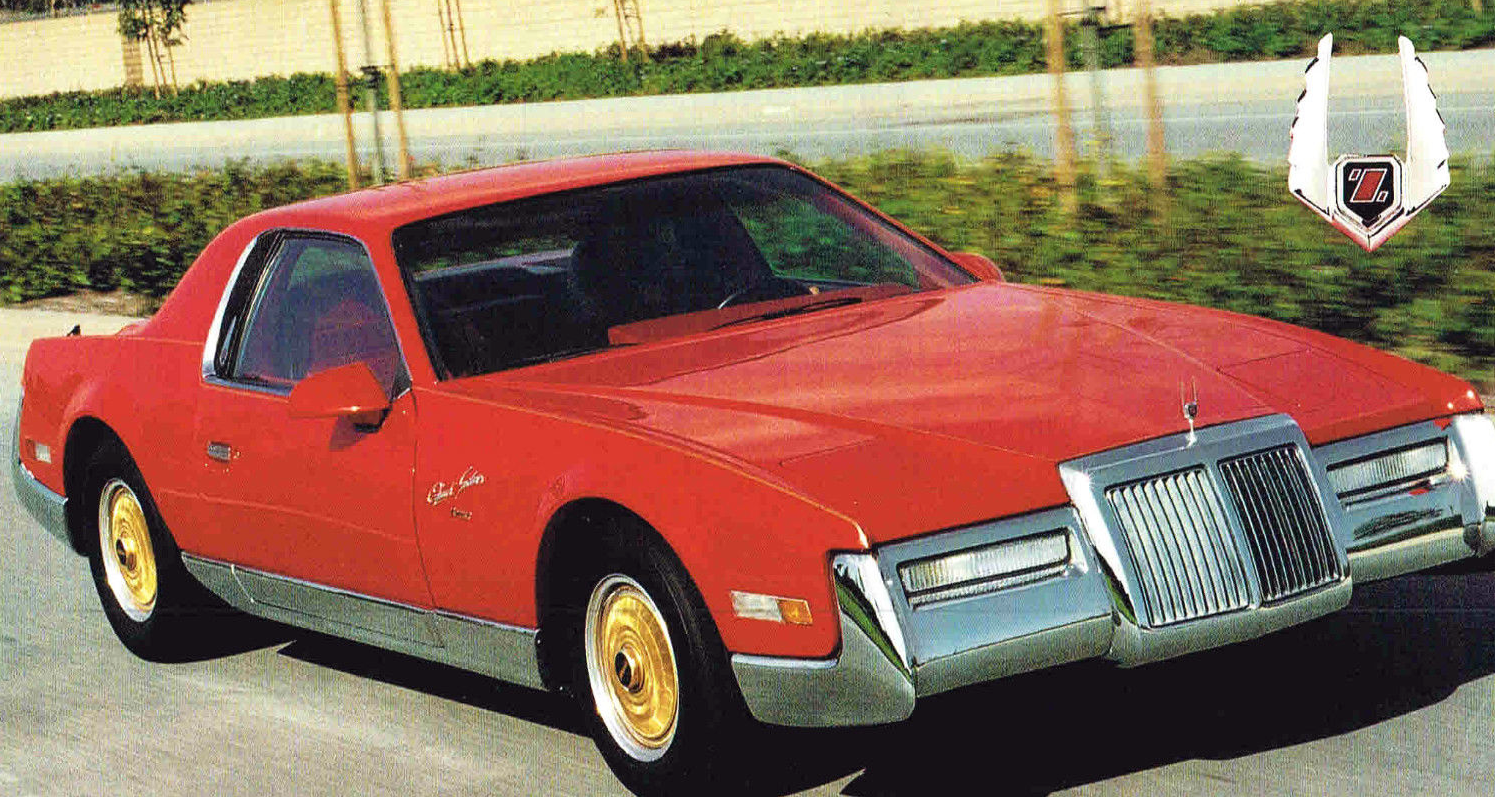 Culinary mashups are hot right now. Chicken and waffles, that time-tested soul-food classic, is now so Twitter-active that even KFC has gotten in on the deal. As a vegetarian, I have never indulged in the savory crispy/maple-y buttery promise of chicken and waffles, but I have good things to say about the improbable pairing of peanut butter and pickle relish. Really.

The auto world is not without its own fanciful mashups. The Aston Martin Cygnet, for example, compromised brand canon by applying the legendary British carmaker’s design and coachbuilding prowess to a 3-cylinder 3-passenger micro car so quirky that Toyota had difficulty passing it off as a Scion. 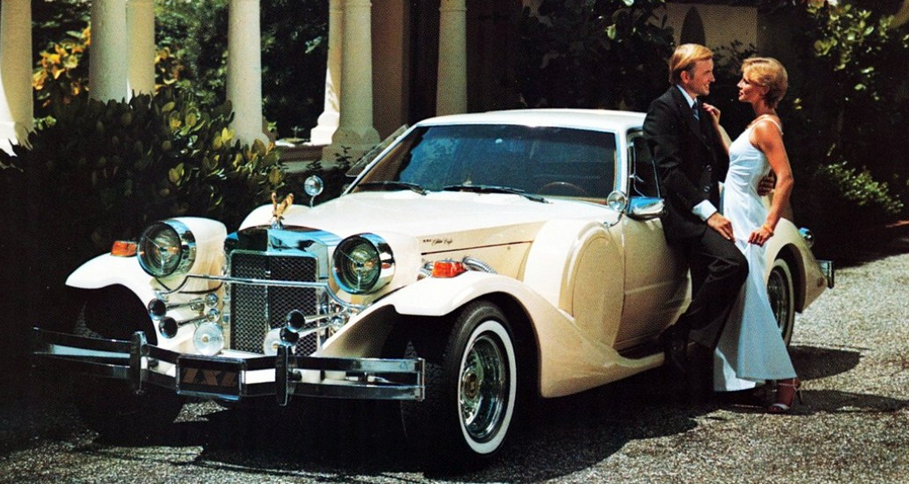 But not all credulity-straining auto mashups end in failure. Some are just strange. Consider the unlikely pairing of  boutique car manufacturer Zimmer and the Pontiac Fiero–the former was a builder of baroque “neo-classic” cars, the latter a low-price General Motors 2-seat sporty coupe (that had more than its share of gestation problems). The result was the Zimmer QuickSilver, a vehicle so compellingly perverse that it is impossible to avoid staring at it.

Seemingly the unholy mating of a Lincoln Mark III with a Fiero and an economy-sized bucket of liquid metal from the movie “Terminator 2,” the QuickSilver would not look out of place in a Terry Gilliam film or Liberace’s garage. But, I would argue, the overall look is surprisingly cohesive. And according to period reporting, the assembly quality was actually impressive.

I contend three things about the QuickSilver:

To achieve the desired profile, Zimmer folks needed to stretch the Fiero wheelbase nearly fifteen inches. What’s interesting is where that extra length is inserted. When a car or truck’s wheelbase is extended, the extra length is typically added aft of the car’s B-pillar. However, because of the Fiero’s mid-engine layout, the car’s firewall is located immediately behind the cabin, and would be complicated to relocate. So, the Zimmer folks instead added all 15 inches of wheelbase forward of the A-pillar, giving the QuickSilver its pronounced proboscis. 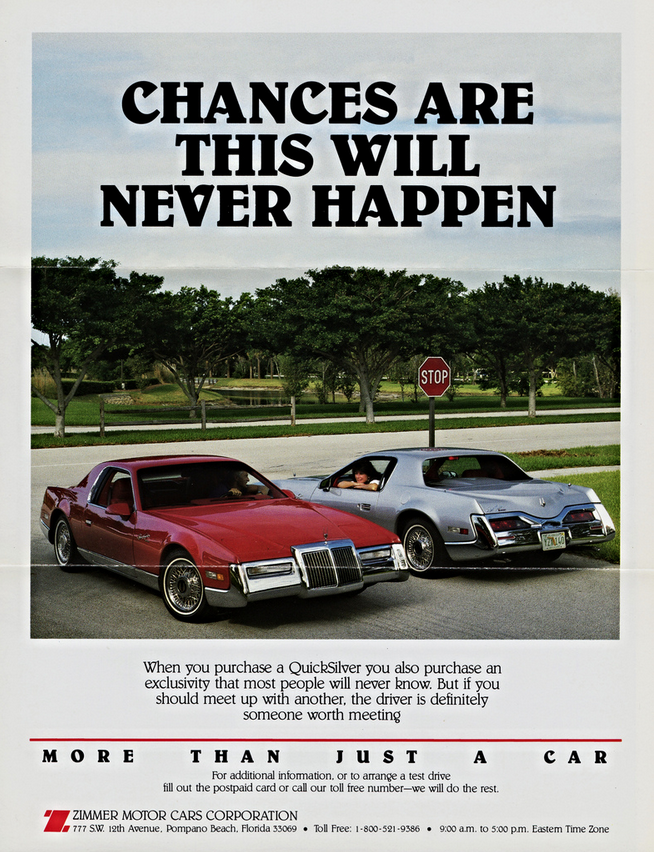 With only 170 QuickSilvers produced, this ad proved prophetic.

The remainder of the QuickSilver’s added length–all 13 inches of it–came in the form of extended front and rear overhangs.

Zimmer was much less aggressive when it came to upgrading the car’s cabin: The basic Fiero interior was left mostly intact, save for upgrading the seat leather, applying real-wood trim to the dash and door panels, and lining the ceiling in suede. 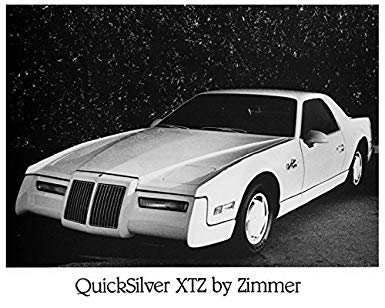 Before it became a property of Mercedes-Benz, aftermarket tuner AMG helped popularize the monochromatic look that became fashionable in the mid- to late Eighties. We don’t know much about the Quicksilver XTZ, but we’d argue that its AMG-style single-color treatment didn’t do much to enhance the car’s overall appeal.

Mechanically the QuickSilver was all Fiero, which wasn’t entirely a bad thing. All began life as Fieros equipped with the available 140-horsepower 2.8-liter V6, 3-speed automatic transmission, and air conditioning. Other Fiero options were ordered as deemed necessary, though most cars were likely fully loaded.

Riding on the stock Fiero brakes and laden with about 400 extra pounds of added chrome and body work, the QuickSilver wasn’t really that quick, or especially entertaining to drive. Contemporaneous reporting puts the little Zimmer coupe at roughly 10 seconds in 0-60-mph runs, while returning about 20 mpg in routine driving.

As for the price… well, if you have to ask…

Between the QuickSilver’s 1985 to 1988 run, the car’s base price ranged from $48,000 to $52,000—roughly twice the price of a same-year Cadillac Eldorado. But what the QuickSilver lacked in dollar value—or technical sophistication—it made up in exclusivity. Per Zimmer, total production came to just 170 units. 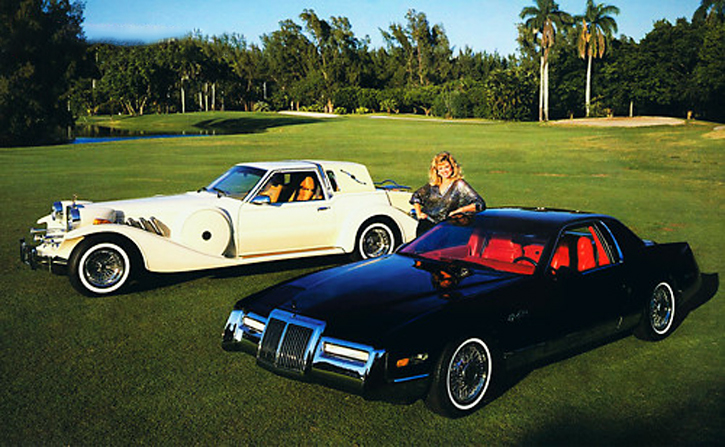 Compared to Golden Spirit (rear), the QuickSilver was almost understated.

Try as we might, we could locate no information regarding the monochromatic Quicksilver XTZ, which capitalized on the single-color fad made popular at the time by Mercedes-Benz aftermarket tuner AMG.

QuickSilver fans are paying real money for clean examples these days. Asking prices seen on the day this article posted ranged from just under $20,000 to $35,000, though we have no idea how much they actually trade for.

I’ll say it again: It could have been so much worse. Given Zimmer’s history with design (see the adjacent Golden Spirit pic) it’s amazing that the QuickSilver isn’t festooned with landau bars and fake exterior brake handles. Sure the car is cartoonish, but that’s part of the charm—and charming cars are few and far between these days. It may not be chicken and waffles, but Zimmer and Fiero is a mashup we can live with.

Note: A company called Zimmer is still peddling overwrought conversion vehicles, though after the brand had disappeared for a number of years. You can check them out here.