Note: The following story was excerpted from the December 2005 issue of Collectible Automobile magazine.

In the decade or so since its 1955 introduction, the Ford Thunderbird came to attract a solid following from female motorists. Perhaps it’s no surprise, then, that the 1966 T-Bird convertible featured on these pages was intended to please a lady.

The car’s current owner, John Petras, of Lincolnshire, Illinois, purchased it from a Ford dealership in Columbia, South Carolina, where the dealer had bought the ’Bird new for his wife. Ford made 5049 Thunderbird convertibles for 1966, but precious few were like this. 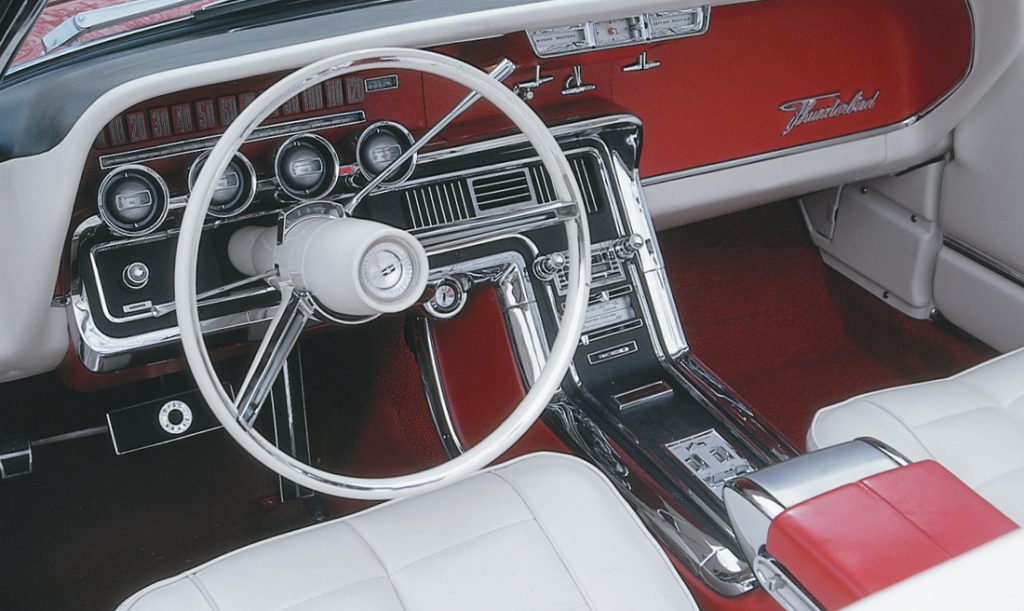 With a nod to the T-Bird’s roots as a two-seater, the car was equipped with a very rare accessory fiberglass tonneau. Sloping headrest fairings trailed back from the front seats over the removable tonneau, which, when in place, covered the curved, loungelike back seat. The concept first appeared on the Thunderbird Sports Roadster, which had been a full-fledged model in 1962 and ’63. Waning sales doomed the Sports Roadster before the fourth-generation ’Bird made its debut in 1964, but a restyled tonneau popped up as a $269 item on the accessory list. Just a handful are thought to have been ordered for the roughly 21,000 Thunderbird ragtops made from 1964 to ’66. Sports Roadsters also came with genuine wire wheels; a set was ordered for this car to complete the look. 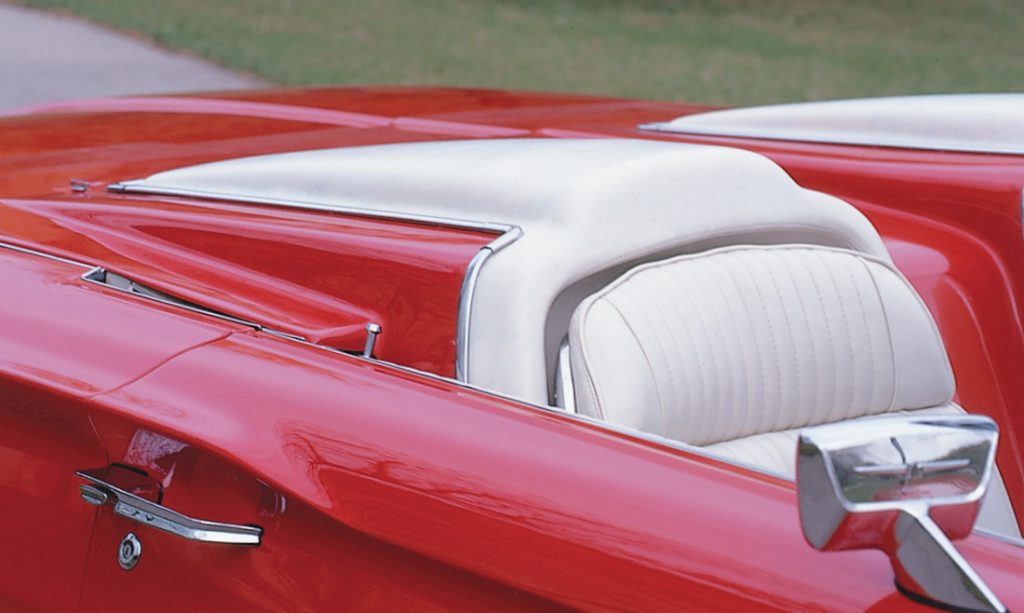 Nineteen sixty-six was the final year for the fourth-generation Thunderbird, so changes were few. They were, however, noticeable.

The frontal facelift, carried out under the direction of L. David Ash, did away with the bumper/grille look of 1964-65. In its place were a larger eggcrate grille above a simpler blade-style bumper and body-color val-ance panel. A big Thunder–bird emblem spread its wings across the center of the grille. The blunt, slightly raised faux hood scoop of prior years became a subtler bulge with a vee’d front.

Bodysides were cleaned up with the deletion of the simulated scoops seen on the front fenders of the ’65s. Rear-fender skirts became options. A full-width taillight ensemble (with a central back-up lamp) replaced a twin-lamp design, but turn signals still blinked sequentially from the middle out, an attention-grabbing gimmick first seen in 1965. 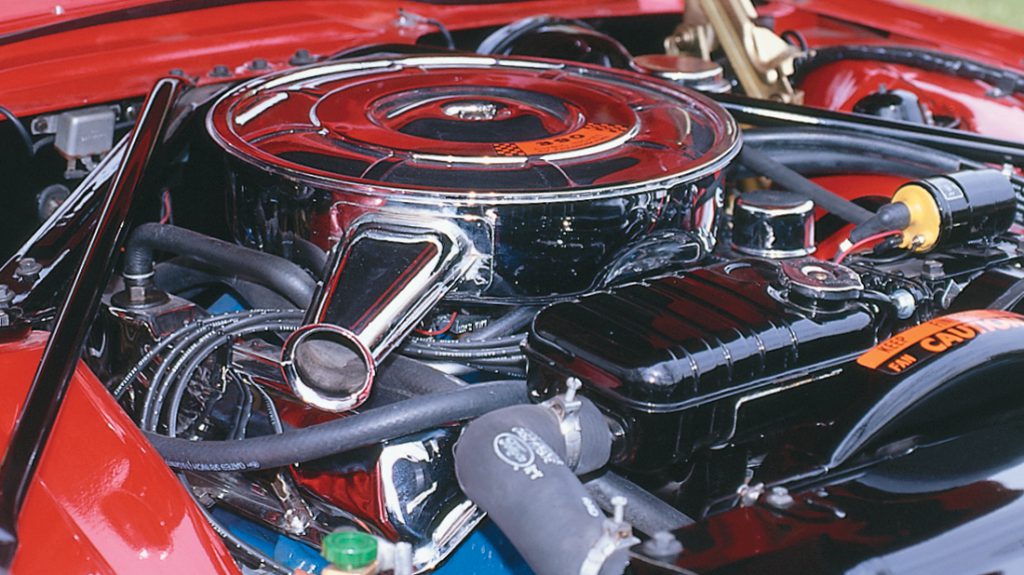 A 428-cid V-8 good for 345 bhp joined the options list, providing T-Bird buyers with their first choice of engines since ’63. The standard powertrain remained Ford’s trusty 390-cube V-8 and the Cruise-O-Matic three-speed automatic transmission, but thanks to a half-point compression boost, the base mill gained 15 horsepower to 315 bhp. Our restored featured car is powered by a 390 dressed up with a chromed air cleaner and valve covers.

Even with these changes, base prices declined a bit from 1965—by $74 in the case of the convertible, to $4879. But sales retreated, too, by almost eight percent. All-new Thunderbirds would arrive for 1967, but a convertible wouldn’t be among them. 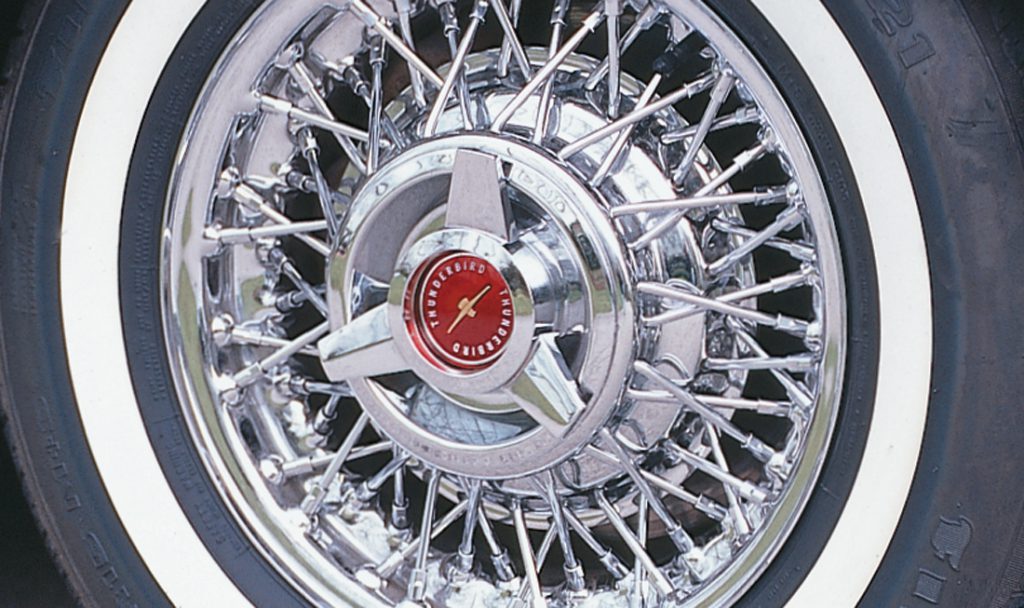