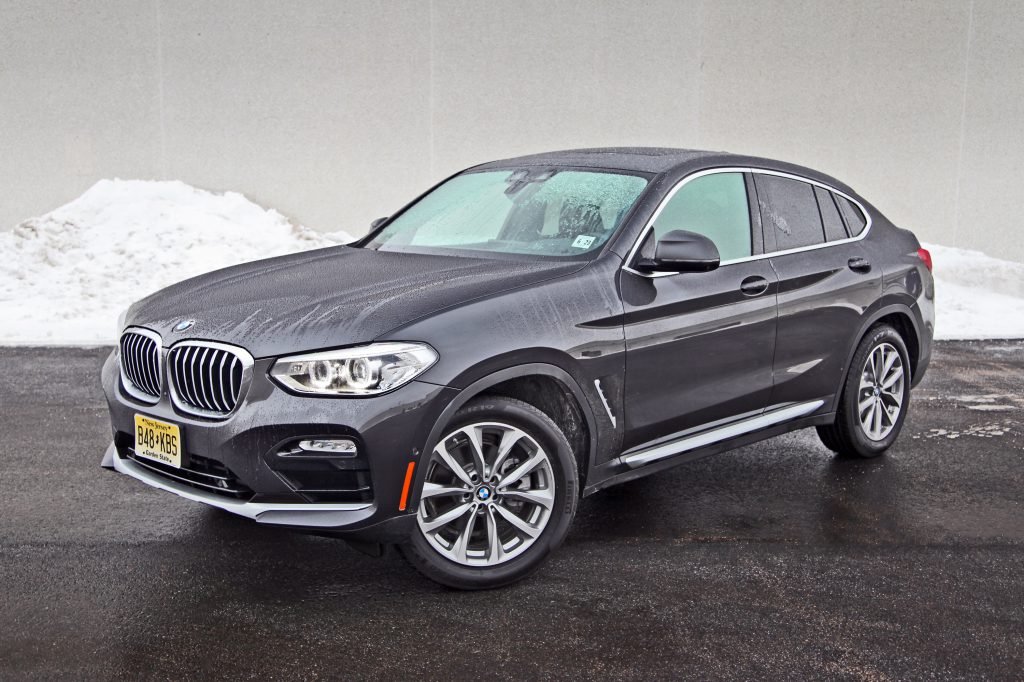 The not so good: Compromised cargo space and rear-seat headroom, some complicated infotainment controls

At BMW, the “X” factor isn’t only found in things that plainly look like sport-utility vehicles. There also are the so-called sport-activity coupes, available in three sizes, with the appearance of bulked-up hatchback four-door sedans perched on all-wheel-drive running gear. For 2019 the one in the middle—the X4—has been fully redesigned. 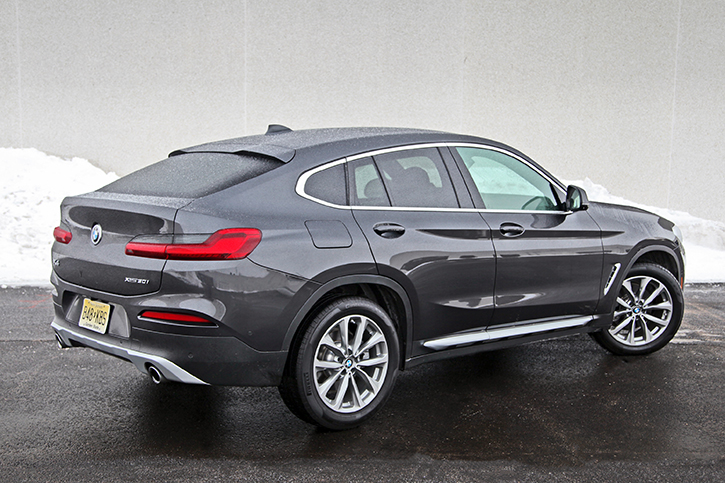 The new X4 keeps the sloped-roof configuration of the previous model, but it spreads it out a little more generously. Wheelbase grows 2.2 inches to 112.8 inches. It is three inches longer overall, 1.4 inches wider, and 0.1 of an inch lower. While these changes affect the proportions and appearance, they also have a practical side, adding to rear-seat legroom and overall cargo space. 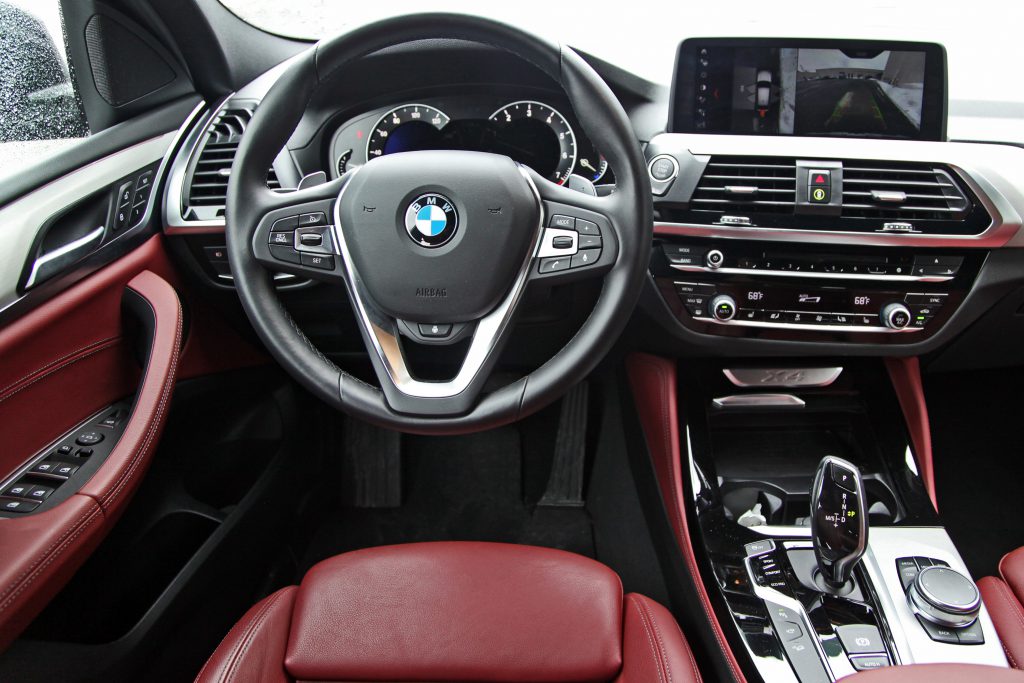 The X4’s cabin has a sporty, upscale feel, particularly when trimmed like our test vehicle. Most controls are logically laid out, but the iDrive infotainment system and its console control-knob interface can complicate some functions.

You might expect a bigger vehicle to be heavier, and you’d be right, but the gain is slight. Base curb weight for the 4-cylinder model—the one tested by Consumer Guide for this report—is listed at 4147 pounds, just 17 more than the corresponding 2018 X4.

There are two versions of the premium-compact X4, the 4-cylinder xDrive30i and the 6-cylinder M40i. The turbocharged 2.0-liter four generates 248 horsepower at 5200-6500 rpm. That’s a gain of eight ponies from ’18, when the base X4 was known as the xDrive28i. The turbo 3.0-liter six in the M40i stays put at 355 horsepower. Either engine is connected to an 8-speed automatic transmission. 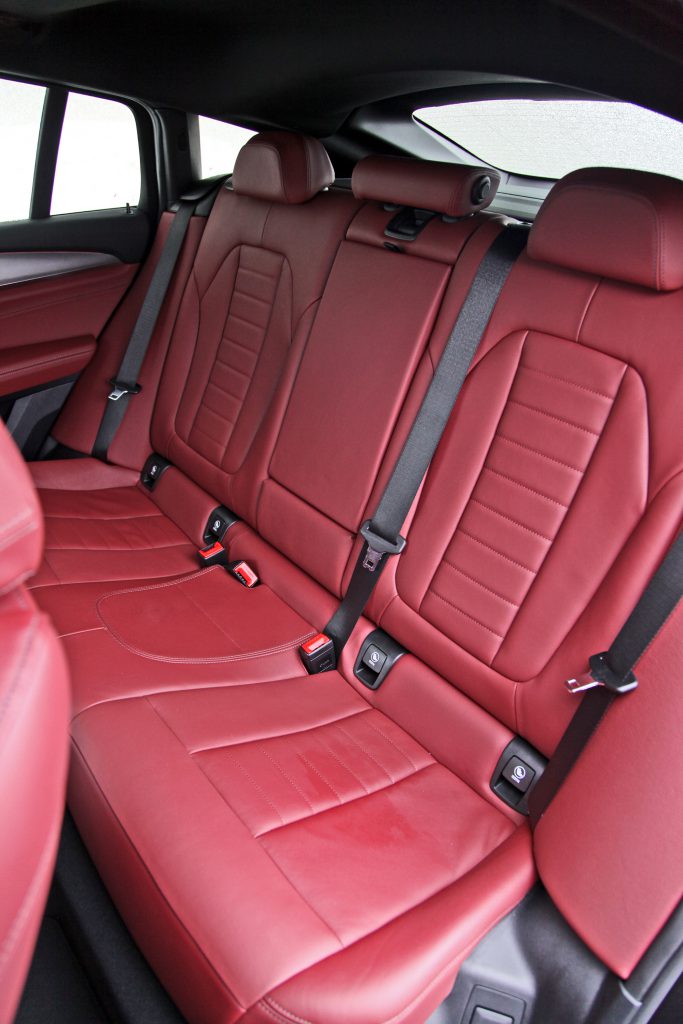 Rear-seat headroom is compromised by the sloping roofline. Our tester was equipped with striking Tacora Red Vernasca Leather upholstery, which added another $1700 to the bottom line.

With torque that peaks at 258 lb-ft as soon as 1450 rpm, the 30i is capable of a snappy jump off the line. The effect is a little sharper in “Sport” mode, where shift patterns are modified for a clearly racier feel. Then the trans is always working to keep revs up in the peak torque band, which runs to 4800 rpm. (Note that Sport is further subdivided into Sport+ and Sport Individual settings.) The EPA rates the 30i at 22 mpg in city use, 29 mpg in highway driving, and 25 mpg combined. This tester tallied 20.32 mpg after driving 124.4 miles with 62 percent city-style operation. However, he did not use the “Eco Pro” mode, with its throttle-tamping capability for potential fuel savings. 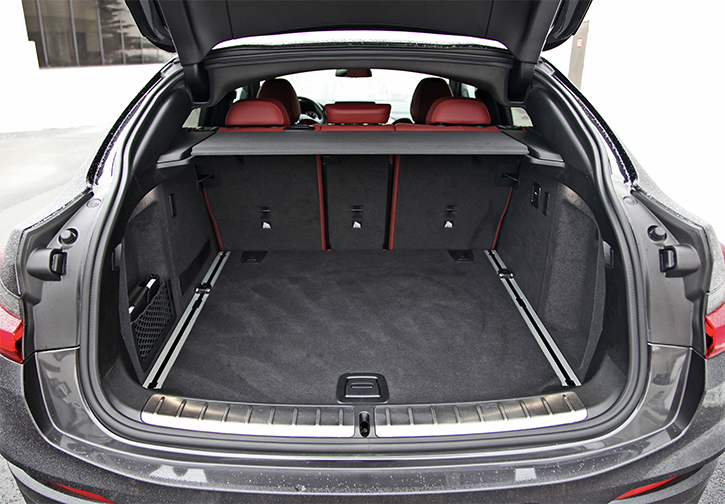 In point of fact, the X4 shares the new architecture that the X3 SUV got with its 2018 redesign. The signature BMW athletic driving character is apparent to the degree that a high-riding, 2-ton compact will allow. There’s crisper steering in Sport mode—though it comes with a stiffer ride than might be preferable for normal commuting. Ride quality in “Comfort” mode serves nicely for the majority of driving situations. As for the all-wheel drive’s contribution to traction, this driver found it to be competent if not wholly conquering in snow. 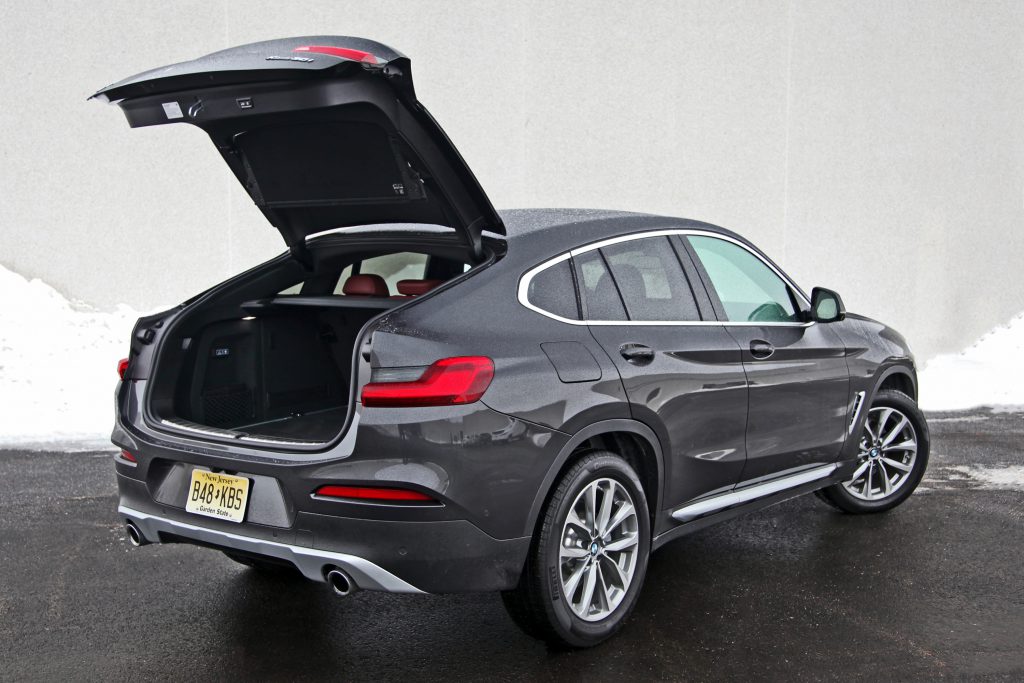 A cargo cover (which is removable for large items) is integrated into the X4’s hatchback lid.

One especially obvious shared feature of the X3 and X4 is the instrument panel with its 10.25-inch stand-up central touchscreen. Most controls are logically laid out, but this being a BMW, there is the attention-demanding iDrive infotainment interface with which to contend. Plus, the shift lever has unconventional “push-forward/pull-back” functionality that comes with a bit of a learning curve before drivers are certain they’re going forward or backward when they do indeed want to be going in those directions.

There is generous distribution of soft-touch material throughout the cabin. In CG’s test vehicle, the standard “SensaTec” leatherette upholstery was replaced by dramatic red-and-black Vernasca leather. Sport bucket seats in front are very accommodating, with 10-way power adjustment and cushion extenders that deliver welcome leg support. There’s a memory system for the driver’s seat. Rear seat backs are adjustable, but also a bit hard. 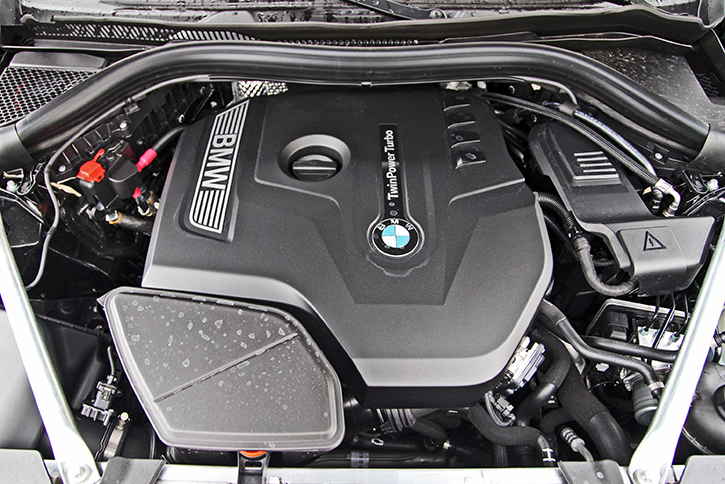 Most front-seat occupants will find satisfying stretch-out space. There’s passable legroom for adults in back, but just two of them will fit because a large central driveline hump rules out a middle passenger. Headroom, good in front, is considerably reduced in back under the sloping roof. Storage for incidentals is handled by an ample glove box, a stingier console box, and a drawer that pulls out of the dash left of the steering column. A lid at the front of the center console opens to reveal cup holders, an optional wireless charger, a USB port, and a 12-volt power point. Net pouches on the backs of the front seats and cup holders in the central armrest serve rear-seat passengers. Large pouches with bottle holders are found in each door.

The hatchback’s roof angle reduces the X4’s utility as a cargo hauler—though maximum capacity has gained 1.1 cubic feet (to 50.5) with the redesign. The flat cargo floor loads at bumper height. Two cargo rails with four fastening points are provided to help secure loads, and a net secures items in a niche cut into the left sidewall. Rear 40/20/40-split seats fold flush with the load floor, though a very narrow gap exists between these surfaces. 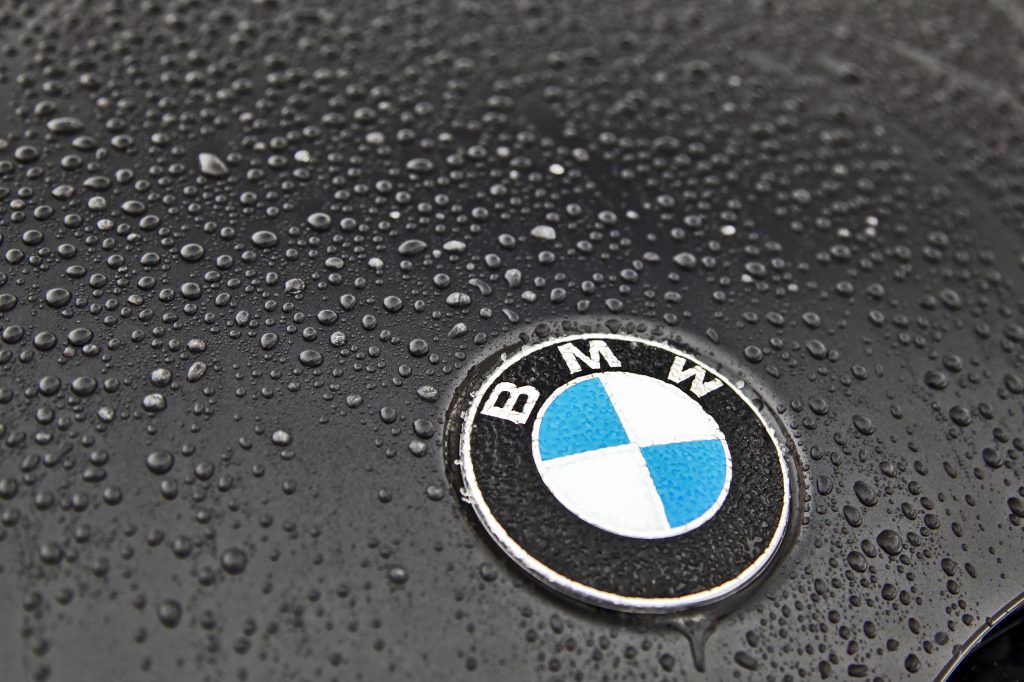 In addition to previously noted items, the X4 xDrive30i comes equipped with 19-inch alloy wheels, a panoramic moonroof, power-folding heated exterior mirrors, LED headlights and fog lights, aluminum interior trim, ambient lighting, automatic climate control, Apple CarPlay compatibility, a Wi-Fi hotspot, and navigation. Safety monitors and driving aids include BMW’s Active Protection System and Active Guard (with frontal-collision warning, and automatic city-collision mitigation and braking with daytime pedestrian detection). All that comes for $51,445 including delivery. The test vehicle’s window sticker blossomed to $57,895 with premium Dark Graphite Metallic paint, the leather seats, wireless charging, and four tech and entertainment packages. One of them was the Parking Assistance Package that can sniff out potential parking spaces, then steer you into a spot. In addition, active ultrasonic sensors call out vehicles and unseen objects with audible warnings—very persistent audible warnings. Trust us, you’ll want to have this function switched off until you really need it.

The X4 is a rarity in the premium compact crossover field—only the Mercedes-Benz GLC Coupe is similarly configured. From a cargo standpoint it’s not as useful as any wagon-bodied small SUV, but for those who value form over function, then this X hits the spot. 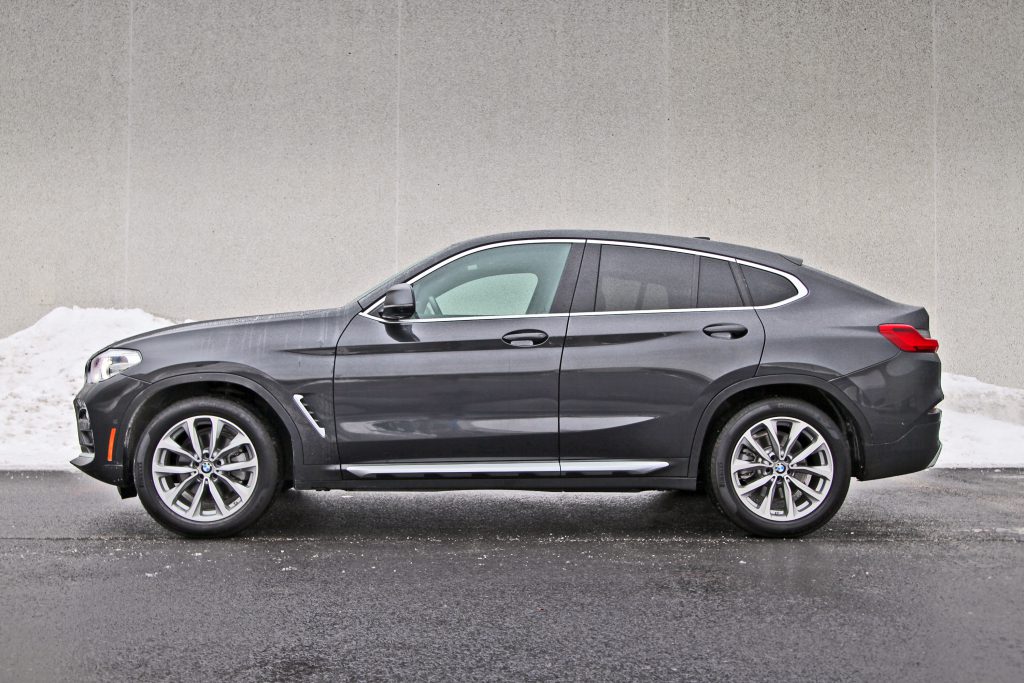 The redesigned-for-2019 BMW X4 carries on as the swoopier sibling of the more-traditional X3. The X4’s fastback-style rear roofline cuts into rear-seat headroom and compromises cargo utility, but makes for a sportier profile.