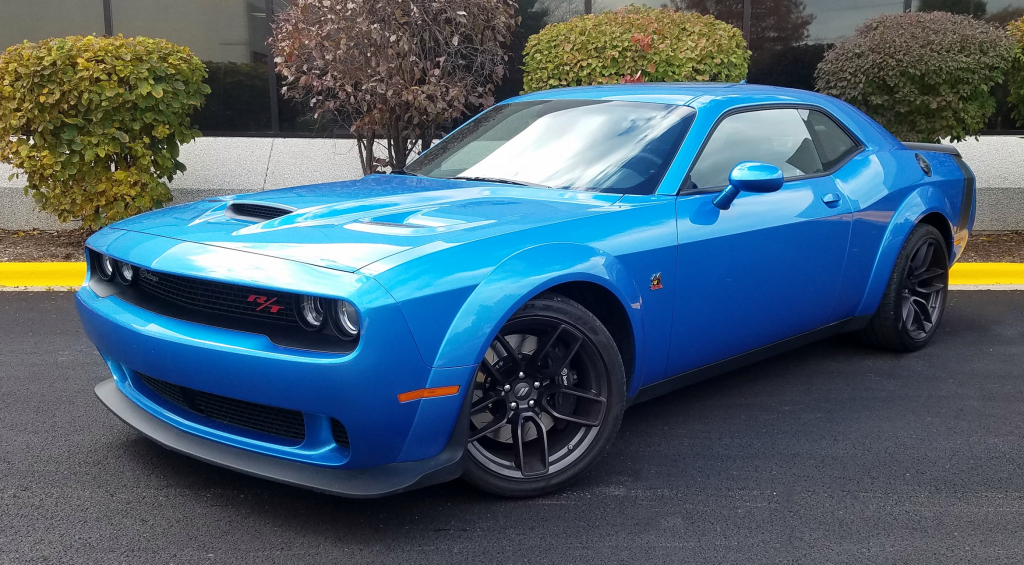 The good: Good passenger and trunk space for the class; adept handling for the size and heft

The not so good: Fuel economy; aged basic design

Hand it to Dodge for pulling off one jaw-dropping stunt after another with the Challenger to get people not to think about the muscle coupe’s advancing age. There was the supercharged 2015 SRT Hellcat with its 707 horsepower. There was the barely road-legal 840-horse Demon in 2018, followed now for ’19 by the more street-savvy Hellcat Redeye with a version of the Demon mill “moderated” to 797 horsepower—all in a basic package that was new in 2008. 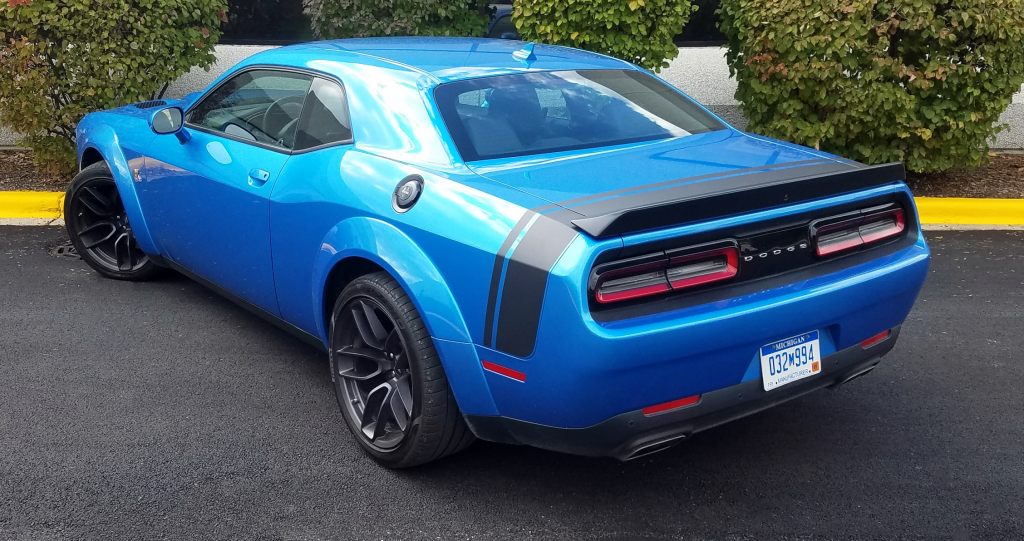 At $6000, the Widebody Package is far and away the priciest item on the Challenger Scat Pack’s option list, but it includes more than just fender flares. Also part of the package are 20-inch-by-11-inch “Devil’s Rim” aluminum wheels on Pirelli tires, 6-piston disc brakes, and adaptive damping suspension.

Eleven years old? Why, you don’t look a day over five. It must be good genes.

Those cars with their eye-bugging power numbers—and big price tags—have been the celebrated headliners in the Challenger thrill show, but there’s also been considerable churn further down the bill. Dodge keeps tinkering with the cheaper, more accessible versions as well. Consumer Guide got to test one of them, the 2019 R/T Scat Pack Plus with a new Widebody option package. 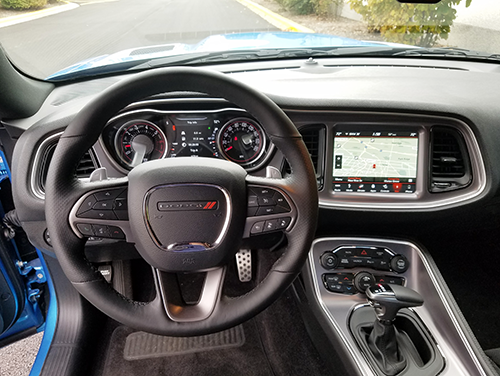 Scat Packs trade the standard R/T’s 5.7-liter Hemi V8 for a 6.4-liter job that boasts 485 horsepower at 6100 rpm and 475 lb-ft of torque at 4100 revs. For ’19, that engine rumbles away beneath an aluminum center-scoop hood with side heat-extraction vents, which formerly topped the Hellcat engine bay. The Widebody package brings even more Hellcat down to the R/T level.

All 2019 R/T Scat Packs add standard performance-related technologies, a few of which will be helpful in actual competition. There’s Launch Control to manage tire slip off the line, Launch Assist to counter wheel hop and the pernicious effects it can have on driveline components, and Line Lock to brake the front wheels while leaving the rears free for a tire-prepping “burnout” prior to a drag strip run. Also included are the SRT selectable drive modes and informational Performance Pages. (Say you need to know “intake air temperature”—there’s a readout for that.)

Even in the default “Auto” mode that’s well tailored to conventional street driving, the R/T Scat Pack’s naturally aspirated engine responds explosively to a determined press of the accelerator. Still, in terms of power delivery and ride, the car is eminently suited to day-in, day-out driving. Tapping into “Sport” gets the adaptive suspension and the steering to firm up for better handling, and “Track” mode does this and modifies shift characteristics for quicker, more positive changes.

Domestic rear-drive-muscle competitors Ford Mustang and Chevrolet Camaro have, in their modern iterations, paid fair heed to handling. The bigger, heavier Challenger champions straight-line performance, but the Widebody package’s suspension upgrades attempt to inject more handling prowess. (Dodge cites test figures that show quicker track lap times than non-Widebody Scat Packs achieve.) When hurrying up expressway ramps or cornering with some pace on surface streets, the test car seemed slightly more composed and nimble than some earlier Challengers, but that’s still not its forte. After all, an R/T Scat Pack Widebody with automatic transmission still weighs more than 4300 pounds. It’s not too hard to get the rear end to kick out under a standing-start power burst with traction control off (as happens when Sport or Track modes are selected). The uprated Brembo binders do provide reassuring stopping power.

Challenger Scat Pack models trade the 375-hp 5.7-liter V8 that comes in R/T models for a 485-hp 6.4-liter V8. Despite a somewhat cramped aperture and high liftover, the Challenger trunk is more spacious than most of its rivals.

The $41,340 starting price for the R/T Scat Pack includes a 6-speed manual transmission as standard equipment, but an 8-speed TorqueFlite automatic that was on the test car can supplant it. It’s seemingly not cheap at $1595, but it does wipe out a $1000 Gas Guzzler Tax required of manual-gearbox cars, so the net cost of the automatic isn’t so much. EPA estimates are 15 mpg in city driving, 18 mpg in highway driving, and 25 mpg in combined operation—all a mile or two per gallon better than the figures with the 6-speed. This driver’s stint worked out to 15.0 mpg, with 55 percent of 224 miles racked up in city-type conditions.

The Challenger has always ranked high in curb appeal, and heading further up the model roster ratchets up the muscular style. The Scat Pack’s scooped and vented hood first appeared on the Challenger Hellcat model.

A $1695 package turns a Scat Pack into a Scat Pack Plus. Content includes Nappa leather/Alcantara seat upholstery with Scat Pack bee logos in the front headrests, ventilated front seats, door trim with ambient lighting, and a power tilt and telescoping steering column. It all makes for a nice but not overly opulent cabin environment in a car that was generously optioned up to a total delivered price of $55,569. Key standard-equipment features of the test car in addition to those already mentioned were active exhaust, rear parking assist, keyless entry and starting, tire inflator, an easy-to-use Uconnect 4C infotainment system (optioned to add navigation), Apple CarPlay and Android Auto smartphone compatibility, satellite radio, and a 4G LTE Wi-Fi hotspot.

No one can say Challengers aren’t meant to be fun… nostalgic Scat Pack bee graphics appear on the front-fender badges and are embroidered into the front-seat backrests.

Meanwhile, the inherent strengths and weaknesses of the Challenger platform carry on as they have since day one. A couple of average-sized adults will fit in the back seat better than they could in a Mustang or Camaro, though wide rear pillars of the accommodating roof pose a substantial over-the-shoulder obstruction to driver vision. The trunk is wide and spacious, but liftover is high, so loading will be a bit of a chore.

There’s a well-worn adage about age that Dodge seems to have taken to heart: it’s just a number. So are E.T.s come think of it, so Challengers rippling with muscle keep defying the calendar.

There’s nothing particularly cutting-edge about the 2019 Challenger–the basic car debuted back in 2008, and elements of its platform date back even further–but Dodge keeps finding clever ways to add performance and appearance upgrades to keep its aged pony car fresh in the eyes of sporty-coupe buyers.