Nobody can accuse Alfa Romeo of not taking this seriously.

Two years ago – after a 20-year absence – the Italian automaker dipped its toe into U.S. waters again with the highly strung 4C sports car, a pseudo “exotic” 2-seater with great appeal but a limited audience.

Then, last year, the company went mainstream – if the 505-horsepower Giulia Quadrifoglio compact sedan can indeed be considered as such.

This year, Alfa is adding yet another “everyday” product to its lineup, slotting its newest entry into one of the hottest segments of the automotive market.

Stelvio can be ordered with several different wheel options, including the spoke wheels shown here along with the company’s signature “5-hole” design shown on the Stelvio in the opening photo at top.

When it goes on sale later this summer, the 2018 Stelvio (named after a curvy mountain pass in the Italian Alps) will mix it up with premium compact crossover rivals Audi Q5, BMW X3, Jaguar F-Pace, Lexus NX, Mercedes-Benz GLC, and Porsche Macan in what Alfa says is the fastest-growing class in all of autodom. And in support of that claim, four of those six listed didn’t even exist three years ago.

Although the Stelvio shares its platform and many interior elements with its Giulia sibling, one thing it doesn’t share is its sister’s available 505-horsepower V6 turbo – at least, not yet. Instead, the Stelvio initially comes only with a 280-horsepower 2.0-liter 4-cylinder turbo (which is also fitted to the base Giulia), along with an 8-speed automatic transmission and standard all-wheel drive. However, the company says the Stelvio’s own Quadrifoglio V6 turbo edition will arrive early in 2018.

Under most circumstances, the 2.0-liter turbo makes power enough. Its minor failings come if you floor the gas from a stop, which it leaves rather leisurely for the first second or two until real power arrives, and sometimes – even in more “normal” driving – the power doesn’t come on in an entirely linear fashion. (Note that “brake torquing” the engine – pressing hard on the brake while also pushing on the gas to build up turbo boost – will alleviate that initial hesitation off the line, and is likely how Alfa achieved its claimed 5.4-second 0-60 time … though it takes forethought to do and probably isn’t the best for prolonging transmission life.) However, the transmission kicks down fairly quickly for decent passing response, and Sport models add paddle shifters facilitating very quick manual shifts. While some of these properties are not ideal, these impressions generally mirror those of most of the aforementioned rivals, as all (save the Jaguar F-Pace) also come with a 4-cylinder turbo. 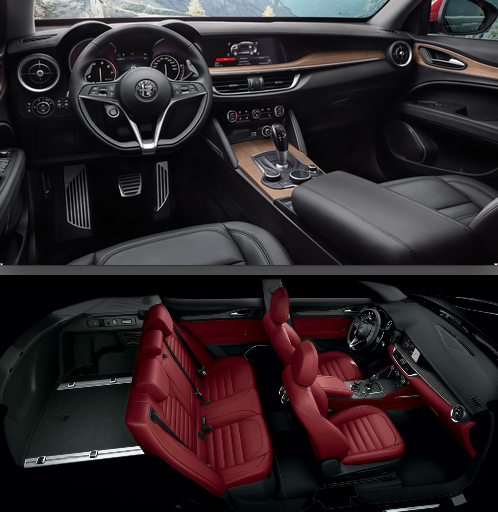 The “double brow” instrument panel dates back to Alfas of yore, but the Stelvio’s other interior elements are thoroughly up to date — for better or worse, in the case of the control layout. Red (shown at bottom) and brown two-tone color schemes are offered, and the Ti Lusso adds a cream variant.

One more note about the engine. While most 4-cylinder turbos are fairly refined at low engine speeds, growing a bit ragged at the upper reaches, the Stelvio’s is rather the opposite. At low speeds it makes a faint clatter not unlike a very muted diesel, but that turns into an enticing howl as the tach needle speeds toward redline.

As might be expected of anything wearing the Alfa Romeo badge, the Stelvio is aimed at the sporty side of the market. That’s reflected in its handling behavior, which seemed to be first rate. One major element in this “feel” is steering that’s very quick on center (meaning that just a small movement of the steering wheel results in a distinct change of direction), and it’s aided by a well-controlled suspension and what Alfa claims is a near-perfect 50:50 front-rear weight balance. What the pristine, twisting roads enjoyed on the Nashville preview didn’t provide us, however, were the kind of rough surfaces we see (all too frequently) around our Chicagoland office, so a “ride quality” evaluation will have to wait until we get a local test vehicle.

One of the Stelvio’s strengths when compared to the competition is its value equation, particularly in base form. Standard on the $42,990 entry-level model are numerous niceties that are usually optional – often at great expense – on class rivals, including leather upholstery, 10-way power front seats (both driver and passenger) with 4-way lumbar adjustment and driver-seat memory, dual-zone climate control, rearview camera with dynamic grid lines, rear obstacle detection, keyless access and starting, auto-dimming rearview mirror, remote start, rain-sensing wipers, adaptive bi-xenon headlights, and a power liftgate. Due to be added later this year are Apple CarPlay and Android Auto, but since they might not be able to be retro-fitted to early production models, delaying a purchase a bit would be worth it if those are important to you.

In now-typical “premium car” fashion, infotainment controls are adjusted by a console control knob. The dash screen is very wide, but on our test vehicle, at least, only part of it was used to display the image from the backup camera; the other side showed a 360-degree view.

The “step-up” model is the $44,990 Stelvio Ti, which includes features from the Cold Weather Package along with 19-inch (vs. 18) aluminum wheels, oak interior trim, satellite radio, and front obstacle detection, and optionally makes available the other option packages.

Both versions are also offered in Sport trim. On the base model, this adds $1800 and brings 19-inch wheels, colored brake calipers, upgraded interior trim, and a sport-tuned suspension. On the Ti, it ups the ante by $2500 and brings those features plus premium sport leather seats, 12-way power front seats with power bolsters and manual seat-cushion extenders. There’s also a Ti Lusso (likewise adding $2500) that brings further interior upgrades including available cream-colored upholstery (other models offering “just” black, brown, or red). A few stand-alone options are also available – such as a dual-pane sunroof, navigation system, and trailer hitch – and Alfa says that a fully loaded Ti tops out at about $53,000.

As with most vehicles in the premium classes, control clarity isn’t a Stelvio strong point. Instead of a touchscreen, Stelvio has a console controller whose actions are displayed on a dashboard screen (6.5 inch on the base model, 8.8 on the Ti), with the controller being flanked by a volume knob and “Menu” and “Option” buttons. Like most such systems, it takes some acclimation (and some long looks from the road) to get where you want to go, but it no doubt gets easier with practice. Climate controls consist of rotary temperature and fan-speed knobs with a repetitive-step pushbutton for mode, and the controls are mounted a bit low, out of easy reach. 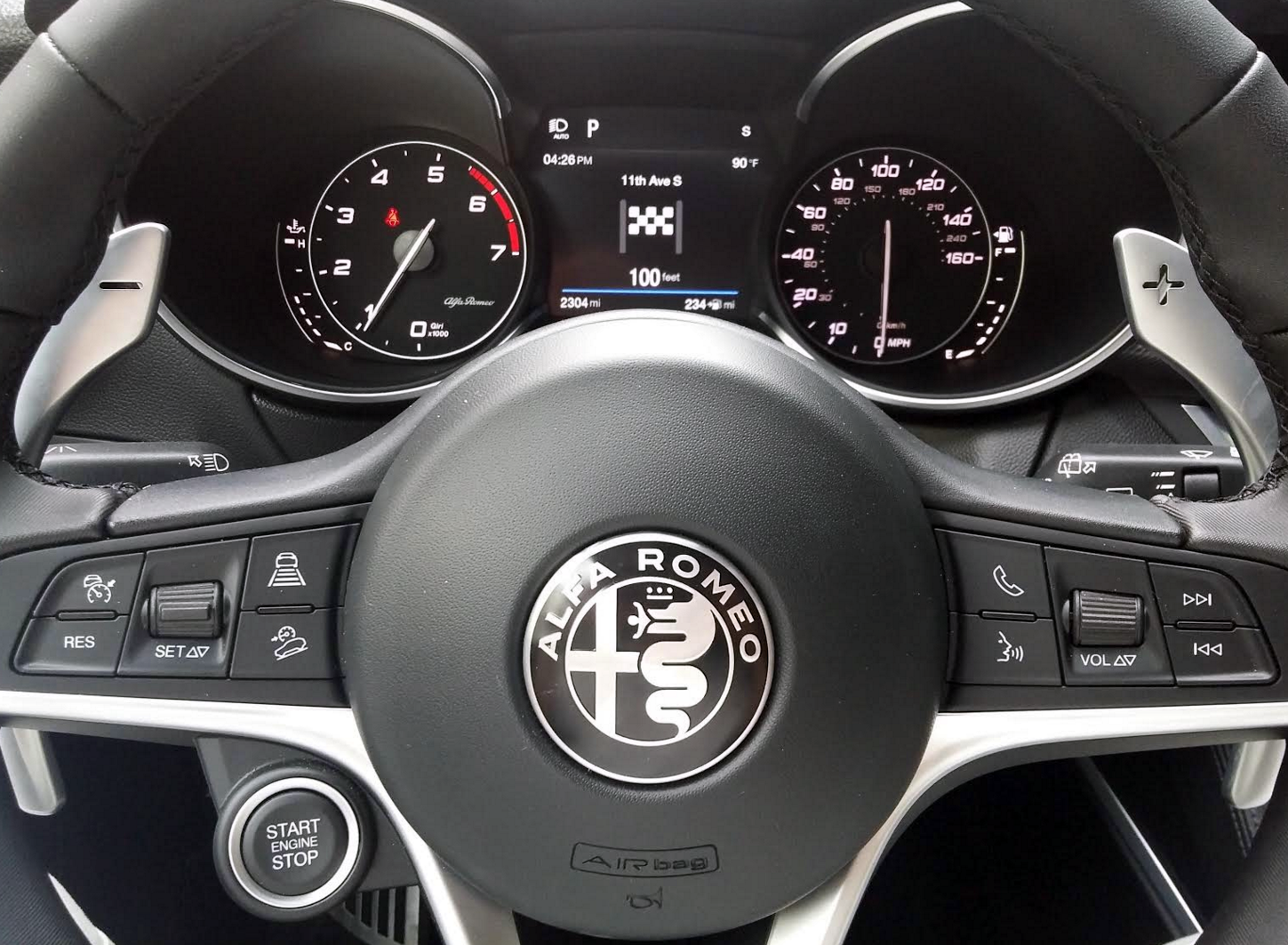 Dealership test-drive tip: Impress the heck out of the salesperson by knowing that the starter button is to the lower left of the steering-wheel hub.

Stepping into the Stelvio, the first thing I noticed was what I couldn’t find: the starter button. Silly me, I forgot that — as in the Giulia — it’s placed to the lower left of the steering-wheel hub, which makes it very easy to find – the second time.

Stelvio also uses a console-mounted shifter that may cross some people up. After starting the engine, you push the lever forward for Reverse, back for Drive, and hit a button on top to put it into Park. It’s that last element that has caused some problems, as it’s very easy to put the car in Reverse when you’re really going for – and think it’s in – Park.

Visibility is just OK to the left front, more restricted to the right front, sides, and particularly the rear corners. A rearview camera is standard, and though the dash screen is wide, the image only covers a portion of it (the other half being taken up with a 360-degree view), making it tough to see anything that isn’t moving.

Materials appear to be of high quality, with the matte wood on the Lusso looking particularly upscale – especially when joined by a two-tone color scheme – though the standard aluminum-look accents are also nice.

There’s good (rather than great) head and leg room up front, while the rear seat only has enough headroom for those up to about 5’11 or so, and legroom gets very tight if the seat ahead is pushed all the way back.

Interior storage is nothing to brag about. The glovebox, console box, and door map pockets are all quite small, with the only nice surprises being covered cupholders beneath Aux and 12-volt jacks and a drop-down left-side dash bin.

Folding the rear seat backs creates a long, flat load floor, and there’s a good amount of hidden storage beneath the rear of it.

The cargo space in back is more versatile. One test vehicle had a large speaker (likely part of the optional Harman Kardon audio system) taking up what would otherwise be a pocket on the left, with a similar one on the right allowing fairly wide items to be carried at the rear. The rear seat backs fold level with the cargo floor (via either levers at the base of the seat cushion or levers in the cargo area), and there’s quite of bit of hidden storage under the cargo floor.

In a class that’s quickly growing in both volume and number of entries, the Stelvio’s greatest selling points are its sporty demeanor and value for the money. The former is certainly expected of any vehicle wearing the legendary Alfa Romeo moniker, but the latter is really not. Yet it’s the fact that you can get a very well equipped Stelvio for less than $46,000 that might be the deal-maker for some premium-class shoppers, even those who may not fully appreciate its dynamic properties or give due reverence to the Alfa Romeo badge.

Alfa Romeo joins the fast-growing premium-compact crossover segment with the sport-oriented Stelvio … that will be even more “sport oriented” when the turbo-V6 Quadrifoglio version arrives early next year.