In my senior year of high school, the auto industry was finally pulling out of the 1990s and moving away from all of the jellybean car designs produced during that period of time (*COUGH* FORD ASPIRE *COUGH*). While many other desirable cars were available, these were my favorites from my graduation year of 2002. Though I had to settle for driving Mom and Dad’s Volvo 240 sedan and station wagon (vehicles I learned to love and still do), these were the ones I lusted after. I put pictures of them on my bedroom wall and on the inside of my locker door at school to show the world that I was a car enthusiast, and had damn good taste in vehicles.

Chevrolet Camaro SS 35th Anniversary Edition
SUVs had taken the industry by storm and stolen sales away from sports cars, prompting many companies to eliminate their heart-pounding performance cars in favor of go-anywhere, conspicuous-consumption, status-symbol 4x4s. As a result, the Camaro—GM’s longtime Mustang fighter—was slated to be discontinued at the end of the model year. It just so happened that 2002 was the 35th year the car had been on sale. To mark the occasion, it was offered with an appearance package that consisted of red paint, silver racing stripes on the hood and rear deck, and commemorative badges on the fenders. A 325-horsepower V8 and a ground-pounding exhaust rumble, coupled with some of the best bodywork I had ever seen, placed this car near the top of my “Most Wanted” list. 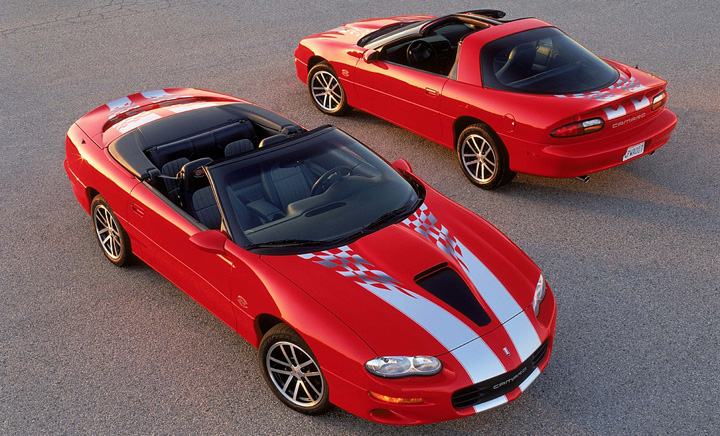 Subaru Impreza WRX
This year also saw the introduction of Subaru’s rally-racing-inspired take on the otherwise pedestrian Impreza sedan. Loved by the media for its fun-to-drive nature, the Impreza WRX performed well in the dry, and, thanks to its “rally-bred” all-wheel-drive system, it was almost unstoppable in the rain and snow. As a high school senior, I liked to hang out with friends, and the WRX’s 4-door layout would have been perfect for taking a carload of teenagers to the movies. Additionally, as soon as the “tuner” craze took hold of mainstream automotive culture, owners modified their WRXs with go-fast and look-good parts. The combination of great performance, good looks, and support from the custom aftermarket-parts industry proved very attractive to a young car nut like me.

Acura NSX
Beautiful, fast, reliable. The first two words in that statement are usually heaped upon exotic cars ad nauseum, but very rarely was the third. The NSX combined all three of these words in a way uncommonly seen in the high-performance exotic-car category. When a vehicle was designed by the same company that turned out the best-selling Honda Accord and Civic, you could bet it would make it through its first several oil changes without major maintenance—something that a Ferrari or Lamborghini owner of the same time period couldn’t boast. The best part of the NSX’s equation was an additional word: attainable. While, at $89,000, it wasn’t “affordable,” it had the chops to challenge cars costing twice and three times as much, making it a relative bargain. For 2002, it received refreshed front-end styling for the first time since its debut 12 years earlier. Rarely do I come across a car that I think looks better after a mid-cycle refresh, but Acura did right by the NSX. I preferred the revised look of its fixed headlights, slightly changed front bumper, and other tweaks. Plus, its unconventional mid-engine layout was exotic enough to warrant my full attention. Any NSX is still highly valued today, and it’s obvious why.

Dodge Viper RT/10
A very powerful, in-your-face, American muscle car. There has always been something that appeals to me about the original Dodge Viper RT/10. Perhaps it was because it looked different than all the other American two-seaters (Corvette, Ford GT, Prowler), due mostly to its snake-face front-end styling, mile-long hood, alluringly rounded flanks, and unique, rear-buttressed “sport bar” behind the occupants’ heads (as well as the accompanying targa-style roof). Maybe it was the huge 8.0-liter V10 pumping out a massive 450 horsepower. Or maybe my impressionable young mind was swayed by the short-lived, circa-1994 TV show of the same name. Model-year 2002 was the final year for the Viper in its first form before it was redesigned for 2003 (when it lost its signature buttressed “sport bar”). For some reason, the later versions of it just haven’t had the same spark for me as the original did.

Lexus IS 300
I’ve always liked the styling of the Lexus IS 300. Its creased bodylines were a nice contrast to the more-rounded BMW 3-Series and Mercedes-Benz C-Class. The IS also boasted a variation of the 2JZ engine found in the Toyota Supra (one of my all-time favorite cars). The IS pumped 215 horsepower from the inline 6-cylinder engine, whereas the Supra’s naturally aspirated 2JZ made 220 horses (the twin-turbo version of the Supra put out 320). Additionally, the IS 300 instantly became more appealing because, for 2002, Lexus chose to add an optional manual transmission.