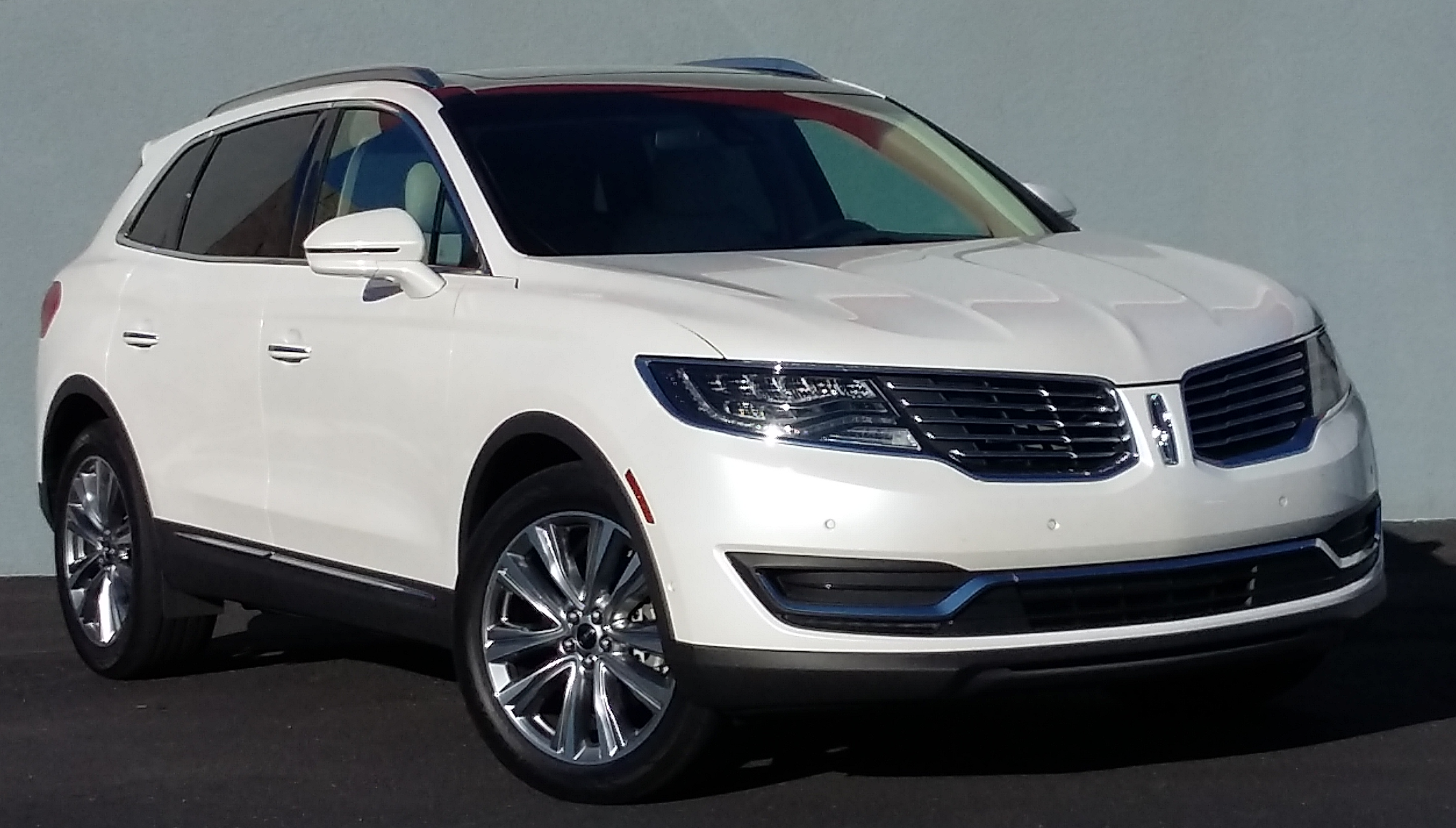 The not so good: Slightly brittle ride with optional 20-inch tires, expensive options drive up the bottom line 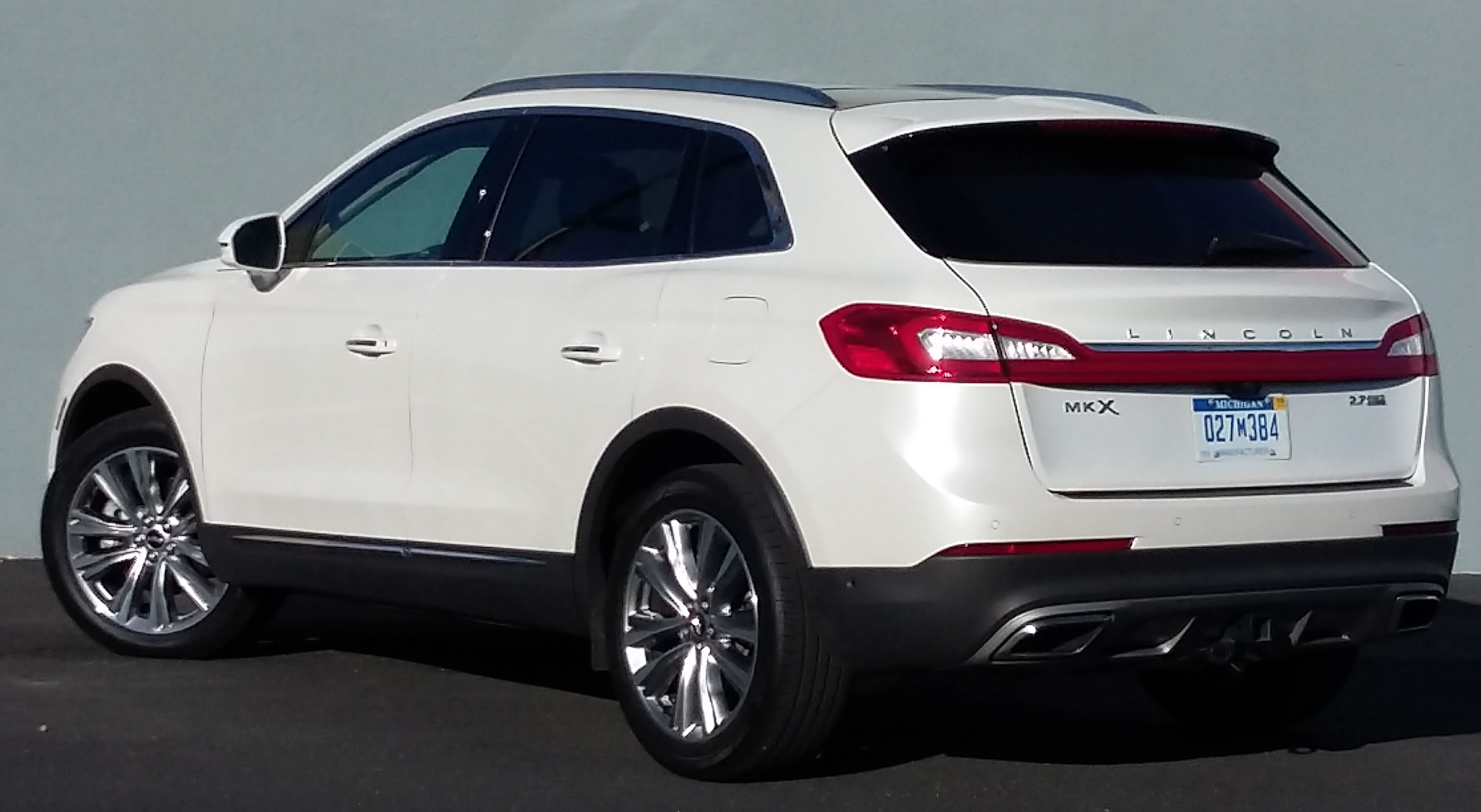 A 303-horsepower 3.5-liter V6 is standard on all trim levels of the MKX, but optional on all is the 335-horsepower 2.7-liter EcoBoost V6 fitted to our tester.

Crossovers are all the rage these days, and luxury crossovers are no exception. Lincoln has entered the latter group of late with dressed-up versions of various Fords, its lineup ranging from the compact MKC (a Consumer Guide Best Buy) based on the popular Ford Escape, all the way to the full-size Navigator built off the Expedition platform.

Tested was the midsize, 5-passenger MKX that borrows from the Ford Edge. As the latter is the shorter, much slower-selling sibling of the 7-passenger Ford Explorer – one of the most popular crossovers in the country – the MKX seems to have drawn the short stick from the Ford family tree.

That’s not to say the Edge is in any way deficient; it’s just that all the top sellers in the midsize class have three rows of seats, as that’s one of the reasons buyers take the leap from compacts to more-expensive midsizers.

In a way, it seems the MKX – or at least the one we tested – was trying too hard to make up for this deficit … or perhaps, to justify its premium label. At its $48,575 base price (including destination), it started out at nearly $20,000 more than the base Ford Edge, albeit dressed with such fine features as a hands-free power liftgate, panoramic sunroof, heated mirrors and heated/cooled front seats with memory, leather upholstery, dual-zone automatic climate control, adaptive headlights, satellite radio, rear obstacle detection, Sync infotainment system with navigation, blind-spot warning, rear cross-traffic alert, keyless access and starting, universal garage-door opener, WiFi hotspot, and smartphone integration for remote start, lock/unlock, and vehicle finder. So … a lot of luxury trappings. 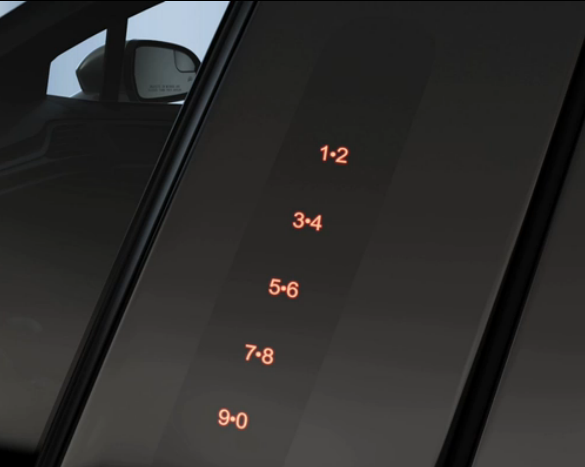 One of the unusual options available is an electronic keypad installed in the driver-side roof pillar that allows entry to the vehicle without a key (if you have the secret code, of course). Once inside, it can also be started without a key, which is great if you’ve lost them.

But then came the options – nearly fifteen thousand dollars worth of them.

Granted, the bottom line of $63,275 isn’t really out of the ballpark for a premium midsize crossover; certainly other 5-seaters in the class can be brought to that point – and beyond. It’s just that some of the added features didn’t seem to be worth their price.

Tops on that list was the $1500, 22-way power driver seat. Although it’s nice for some people to be able to adjust and configure the seats to their liking, these didn’t offer any combination that I found completely comfortable.

For starters, the seat cushion is very narrow (and as I’m fairly narrow myself, I don’t think this is an improper assessment), with tall, prominent side bolsters that are convex in cross-section (rather than just angled and straight). Even at their widest setting (part of the “22 ways”) these “bulges” cut into my thighs, making for rather uncomfortable seating. Admittedly, it didn’t seem as bad after I rode on them a few days, but it was never great. 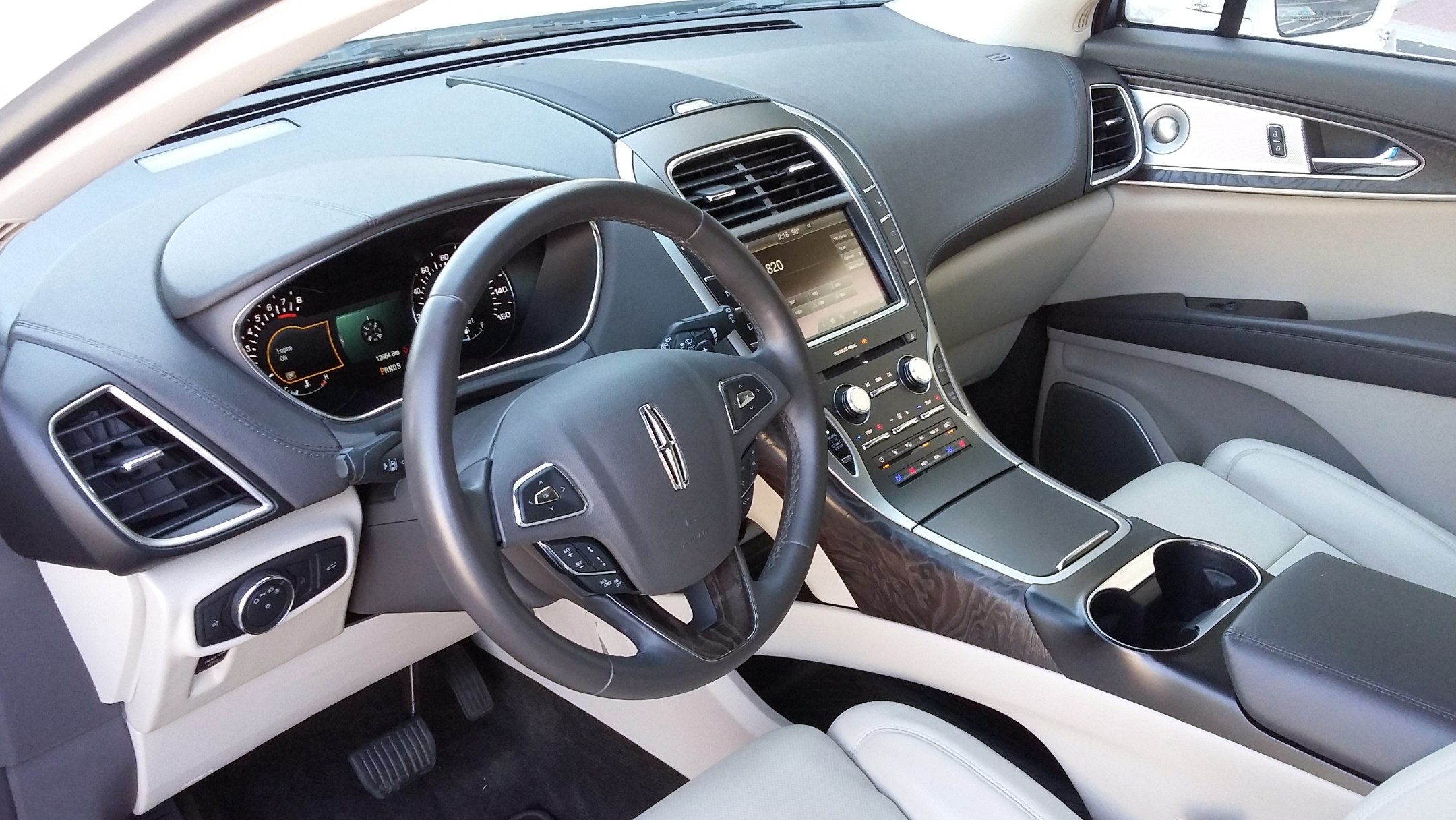 “Look Ma, no shifter!” In fact, there is one (or actually, several), as gear selection is done through buttons stacked next to the dashboard touchscreen (see photo below). This allows more space in the console along with two bins below it: a small upper one at the forward edge (barely visible here), and a larger lower one.

There were not one but three lumbar cushions (low, middle, and high), all of which could be adjusted separately. As I’m generally a fan of lumbar adjustment, this seemed great. But although each could be inflated to 10 levels, I found the huge step between setting 1 and 2 to bypass the one that was “just right,” so I left it in the slightly lacking “1” setting. Nicer were the seat massagers, though I appreciated the ones in the seat back more than those in the cushion (and thankfully, you can choose one, the other, or both).

Although the MKX comes standard with 18-inch wheels, the tested model rode on 20s, which were shod with low-profile 245/50R-20 tires. (21-inch wheels are also offered.) The tires pattered loudly over small bumps and didn’t absorb them very well. And on a few swells, the suspension seemed to rock corner-to-corner rather than fore and aft, though that is admittedly a minor point. Aside from those elements, the MKX rode fairly well, though it was tested in Phoenix, where most road surfaces don’t pose much of a ride challenge. In any case, we’d recommend trying the 20s (or 21s) before opting for them.

Standard even on upper trim levels is a 303-horsepower 3.7-liter V6. Fitted to our tester was the optional (at $2000) 335-horsepower twin-turbocharged 2.7-liter EcoBoost V6. Unlike some smaller turbos, there was virtually no noticeable lag (a delay in power delivery as the turbo spins up to speed), even when nailing the gas from a stop, which is usually when lag is most evident. There was also plenty of power – sometimes a surprising amount – for passing at highway speeds. Whether this engine provides appreciably better acceleration than the standard engine is hard to say, and is entirely up to the judgement of a buyer. So this is something else you may want to try before deciding.

Another benefit of the turbo engine is that it is awarded slightly better EPA fuel-economy estimates. AWD models (which is what we drove) are rated at 17 city/24 highway, 1-mpg better than with the 3.7. In 296 miles of about 75-percent highway driving, we averaged 20.5 mpg, which is in line with the EPA estimates. 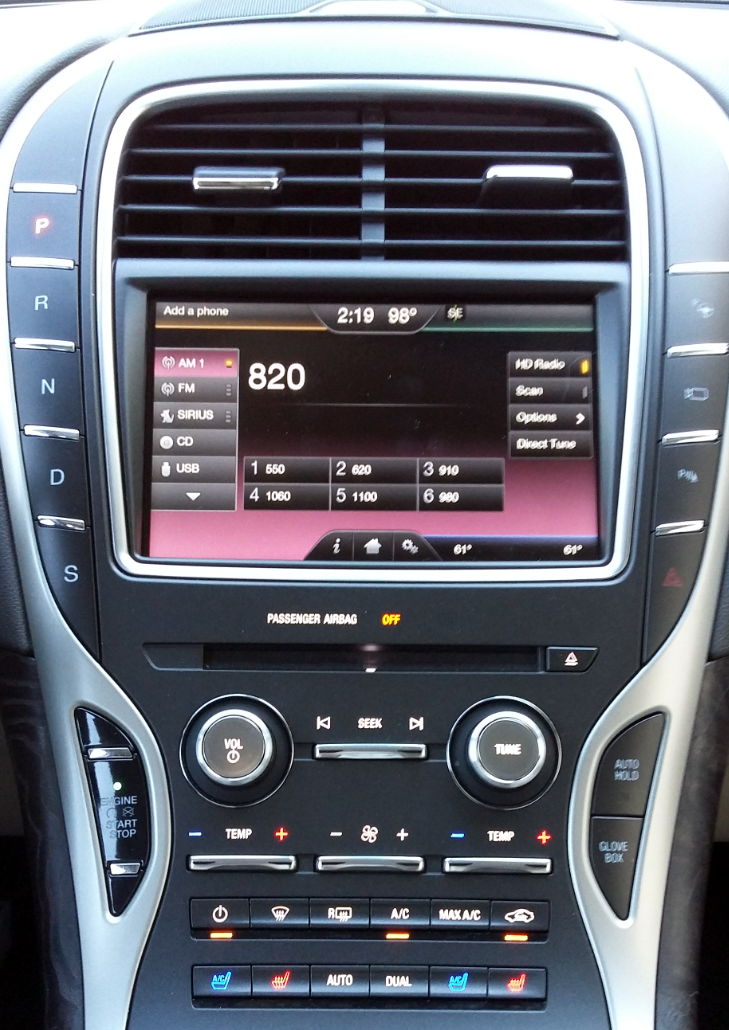 As might be expected in a vehicle of this class, the MKX carried a full complement of comfort, convenience, and safety features. Notable among them were a foot-activated power liftgate, power lowering rear seat backs (though not raising), puddle lamps that shine a Lincoln emblem on the ground as you get in at night, 360-degree cameras, inflatable rear shoulder belts that act somewhat like airbags for the rear-seat passengers, and “keyless” keypad access with buttons on the driver’s door pillar that allow you to get into the vehicle by entering a code.

Once inside, you’ll find a good amount of front and rear passenger room. There’s also quite a bit of storage space, much of it thanks to a pair of under-console bins: one small, one large, both a bit inconvenient to access. Particularly tricky to reach is the 12-volt outlet hidden inside the smaller under-console bin.

Our tester was fitted with a two-tone interior that looked good at first glance. The door tops and armrests are decently padded, but tapping the dashtop revealed what felt like a leather skin covering hard plastic. A passenger noted that the wood trim looked “fakey” (hate it when they toss out those technical terms), and I have to agree, though it was augmented with nice aluminum and chrome accents.

Visibility is good to the front corners, OK to the sides, decent to the rear. However, the sunvisors, when swung to the sides, don’t quite cover the whole window, allowing some sunlight to poke through at the back edge (mostly of concern if you’re tall and have the seat far back). Our tester was fitted with 360-degree cameras, and I liked the fact that there was a separate button on the right side of the dashboard screen that allows you to easily activate select cameras for a front or side view when parking. 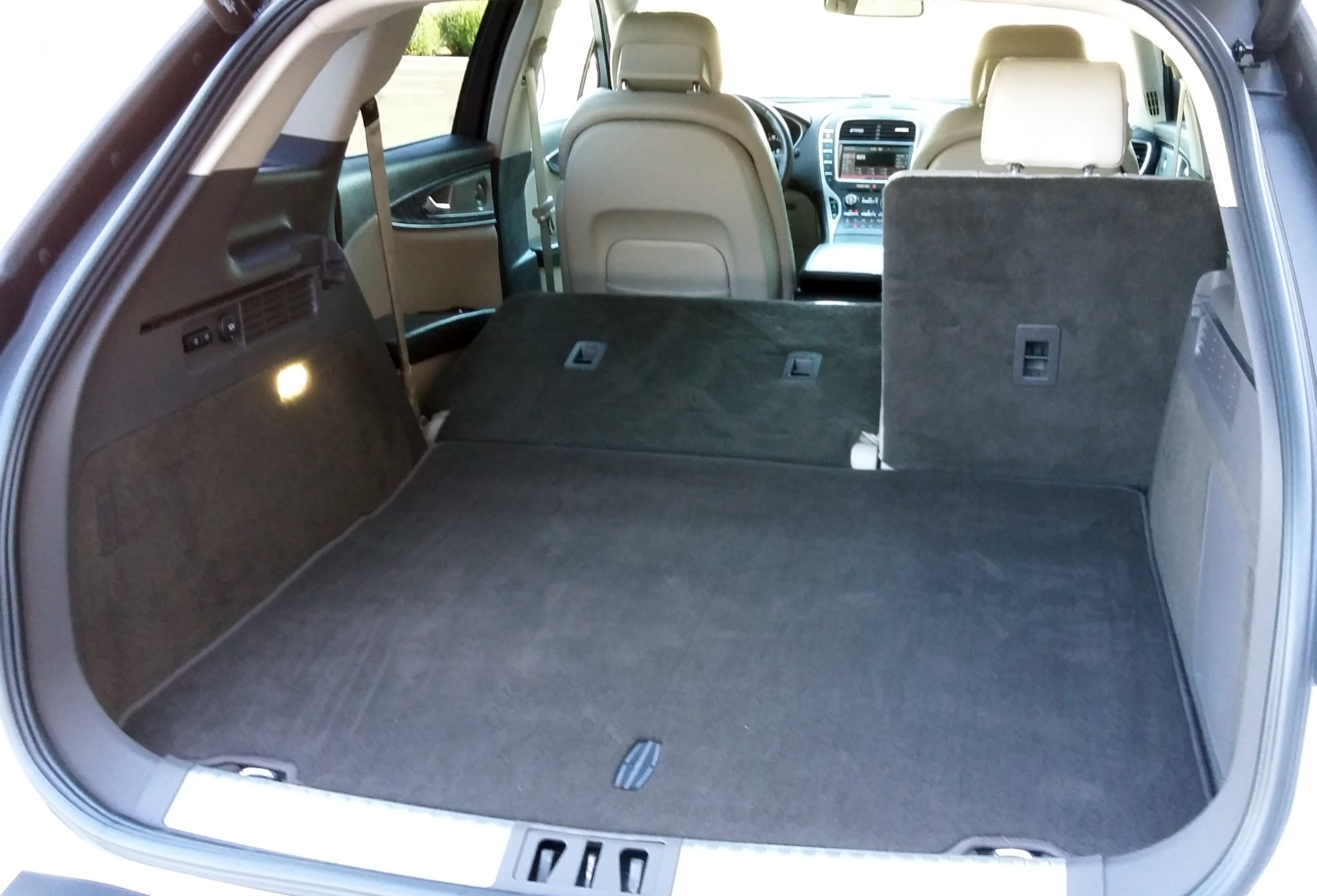 The cargo area is rather narrow at the rear (it’s unlikely your golf clubs would fit sideways), but the rear seat backs power fold to form a long, flat floor, and there’s plenty of “hidden” storage space beneath it.

The control layout is reasonably good, though there are some gaffes. There are volume and tuning knobs, with band and station selection done through the touchscreen – a fairly conventional strategy. However, choosing audio, phone, navigation, or other screens means hitting slender buttons in the corners of the screen, lower ones being partially blocked by the surround, and all being difficult to hit while driving down the road. Climate controls consist entirely of repetitive-step buttons – which are rather tedious to use — though with the standard automatic climate control, you don’t need to use them very often.

Somewhat controversial is Lincoln’s choice of going with dash-mounted transmission-gear selection buttons rather than a conventional console-mounted shift lever. Granted, it took a while to get used to using them, but after that, I really liked them – if for no other reason than that they free up console space, part of what allows for the aforementioned under-console bins.

The cargo area in back is rather narrow, but there’s quite a bit of under-floor storage space, and as mentioned, the rear seat backs power-fold down (though not up) to create a long, flat-floored cargo area.

While it may seem as though the MKX is just a pricier Edge, it offers features the Ford doesn’t – along with the more prestigious “Lincoln” nameplate. And while we think most buyers who only need two rows of seats would be better served by the MKX’s compact MKC sibling, the latter doesn’t offer quite the room, power, or maximum 3500-lb towing capacity of the MKX. And while you can certainly get a lower-priced one with far fewer features than our test vehicle had, it’s nice that all those high-end goodies are at least available.

With all the luxury features offered, the Lincoln MKX isn’t just a gussied-up Ford Edge. Be careful with option selection, and it can even be a decent premium-SUV value.