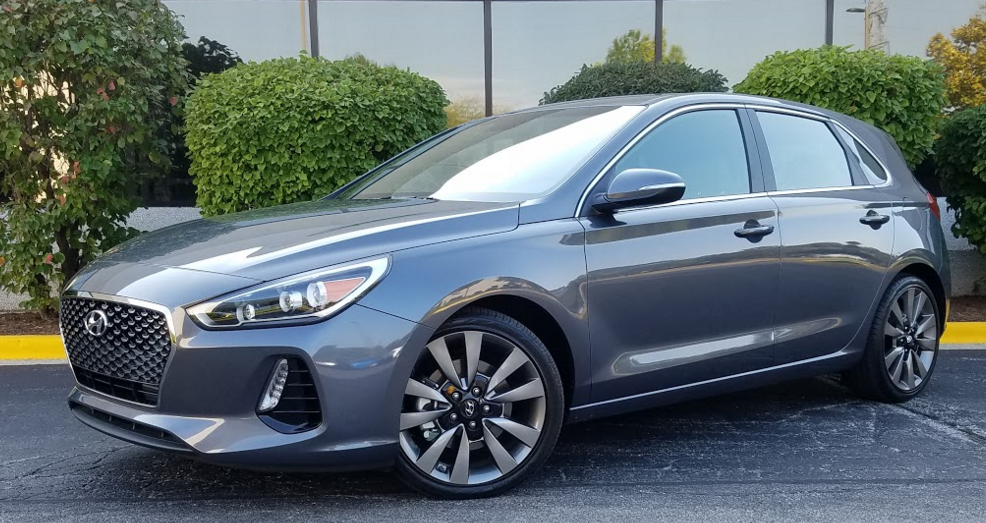 The great: Sporty performance for the price, slick shifter

The not so good: Slightly jiggly ride, low-speed turbo lag

Although once derided as “econoboxes,” hatchbacks have made a comeback of late. Yet when Hyundai introduced a redesigned Elantra last year, it arrived only in sedan form, with the Elantra GT hatchback version soldiering on virtually unchanged. But it seems Hyundai was simply saving the best for last.

The base Elantra GT comes standard with a 2.0-liter four making 162 horsepower. Added for 2018 is a GT Sport model powered by a turbocharged 1.6-liter engine pumping out 201 horsepower. And that’s the version that landed on Consumer Guide®’s doorstep. 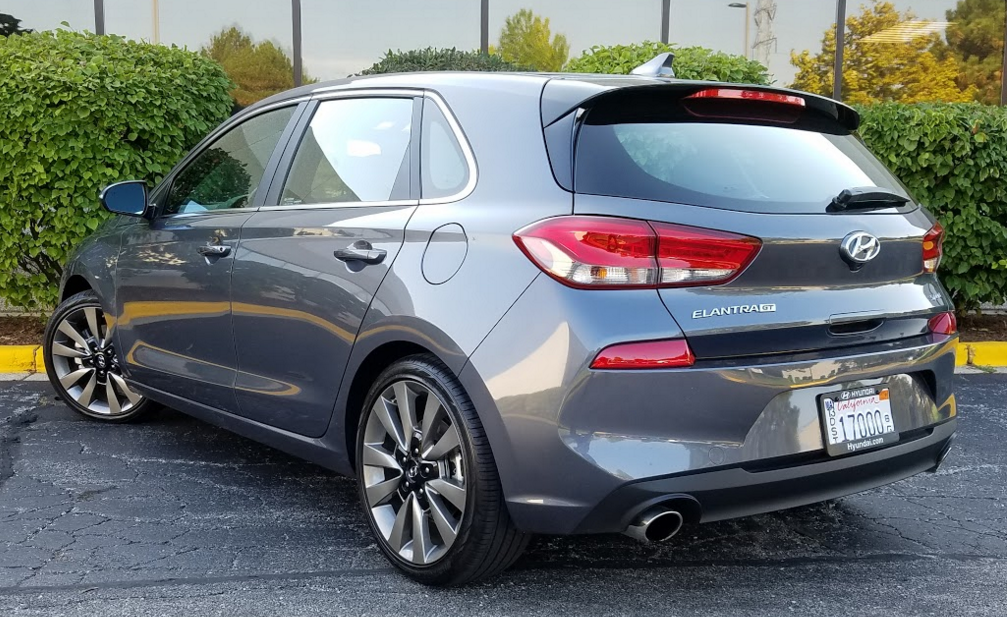 But Hyundai sort of stacked the deck with this one. For in place of the 7-speed automated-manual transmission (which functions much like a conventional automatic) most folks will likely choose, our test car came with the 6-speed manual.

Why “stacked”? Well, when earlier this year we tested a sedan version of the Sport with the same engine equipped with the automated-manual gearbox, not all of our drivers liked the “personality” of that transmission. But the 6-speed manual drew no such complaints. In fact, its slick shifter and easily modulated clutch were noted as highlights, and the combination of manual transmission and turbocharged power really served to qualify the Sport surname. It also served to mask some of the engine’s “turbo lag” (a slight delay in power delivery when the throttle is stabbed) that’s common to small turbocharged engines. But to its credit, while power seemed lacking at very low engine speeds (such as when rolling a stop sign in second gear), smoothness never was; unlike many small 4-cylinder engines, this one pulled away with no discernible shudder. That powertrain was nicely matched with the more sophisticated suspension fitted to Sport versions vs. their standard GT counterparts to provide inspiring handling and crisp (if light) steering feel. However, as is often the case, there’s a tradeoff with ride quality, which could get abrupt over bumps and a bit jiggly at times. 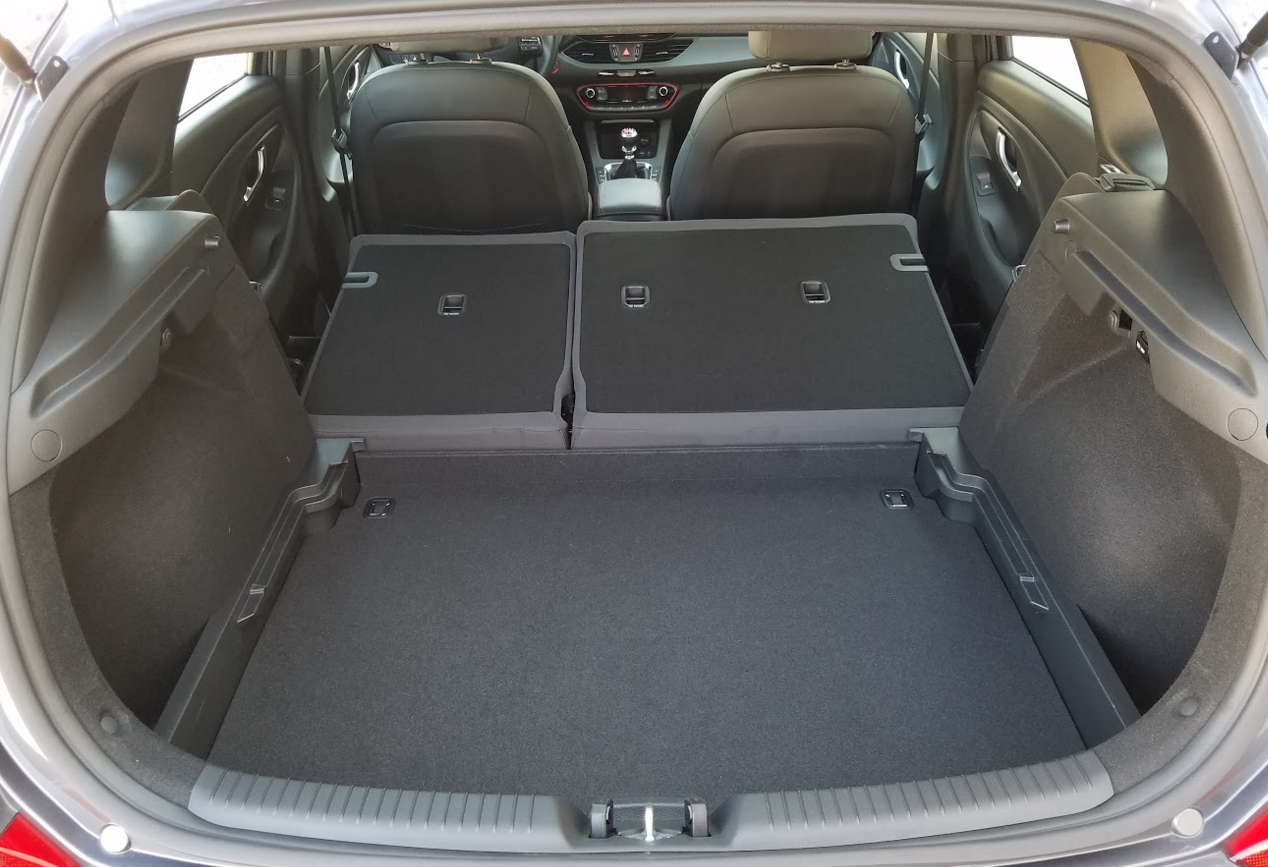 The cargo floor can be set in a lowered position (shown) for increased cargo height, or moved to its higher position that brings it level with the folded rear seat backs to make it easier to slide long items forward.

Besides all that, any Elantra GT  is a rather practical conveyance. The rear seat backs fold level with the 2-tiered cargo floor in its raised position (it can be lowered a bit to accommodate taller items), which creates a sizable load space. There are also a number of handy cabin storage cubbies, highlighted by a large glovebox and a covered forward console bin hosting Aux/USB/12-volt plugs that’s perfect for stashing a cell phone. Passenger room is good for a compact though not great, as really tall drivers might feel a bit cramped. But rear-seat headroom should be sufficient for 6-footers, who should also find enough legroom unless the seat ahead is pushed all the way back.

The Sport’s cabin is accented with red stitching and accents that help dress up an otherwise all-black treatment, and many surfaces are padded, including the door tops. Visibility is OK to the front though somewhat restricted to the sides and back. 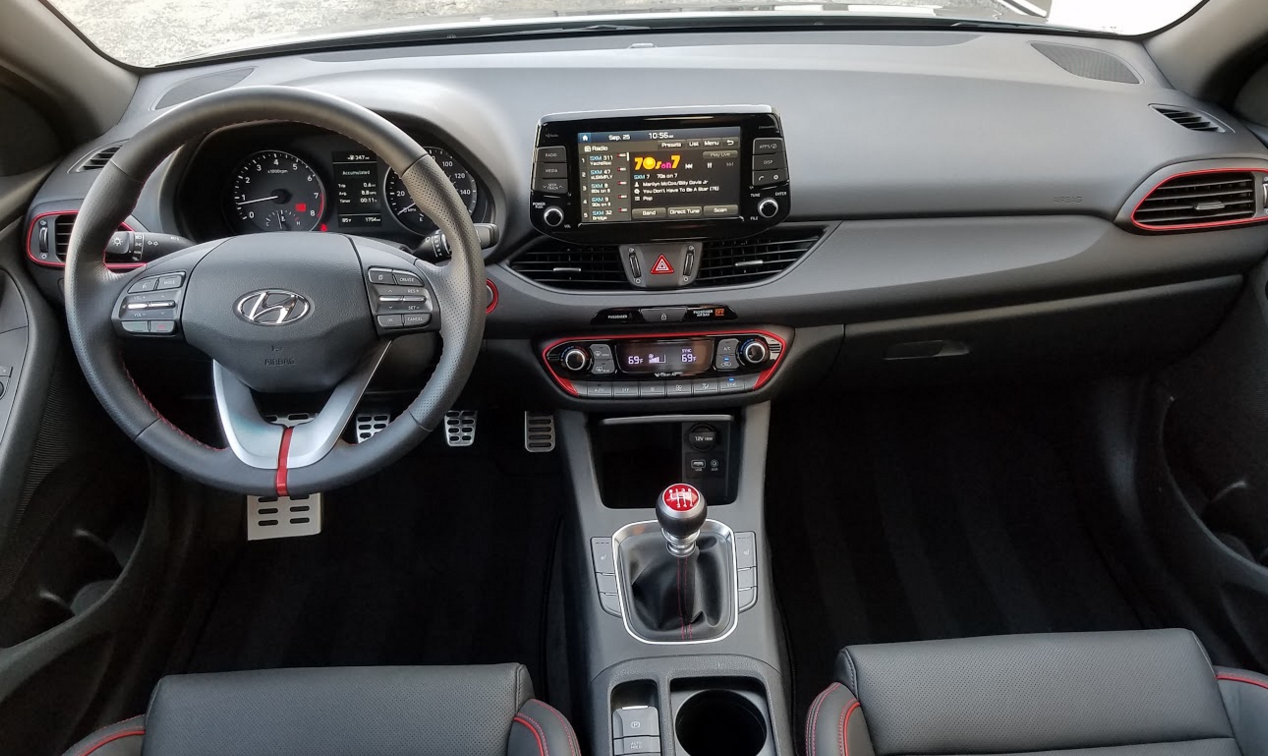 Red accents and seat stitching brighten the interior, while metal pedal covers add a sporty touch. Many surfaces are padded — including the door tops — and there are numerous handy storage cubbies.

Hyundai has typically offered better-than-usual control layouts in its vehicles, and though this one wasn’t my favorite, it was quite good nonetheless. The infotainment system includes volume and tuning knobs along with six physical buttons that really ease its use, and though the climate system had rotary knobs for temperature but less-convenient repetitive-step pushbuttons for mode and fan speed, at least all were easy to reach.

Stepping up from the base GT hatchback to the GT Sport costs nearly $4000, but adds a lot. Not only do you get the turbocharged engine and upgraded suspension, the jump also brings leather upholstery/steering-wheel cover/shift knob, heated front seats, automatic climate control, LED head and tail lights, 18-inch wheels (vs. 17s), and blind-spot alert. It also makes available an optional $3850 Tech Package (which our car did not have) that includes power driver seat with lumbar adjustment, ventilated front seats, a sunroof, wireless cell-phone charging, navigation system, premium audio system, forward collision warning and mitigation with pedestrian detection, lane-departure warning, lane-keep assist, adaptive cruise control, automatic high beams, and Hyundai’s Blue Link telematics system. Note that most of those features can be optioned into a “regular” GT, but it costs a bunch.

It used to be that the Elantra offered one of the few compact hatchbacks out there, but fresh rivals have recently arrived in the form of the Chevrolet Cruze and Honda Civic hatchbacks, both impressive newcomers. But for those who love the versatility of a hatchback, there’s nothing like a little friendly competition to improve the breed.

The redesigned Elantra GT hatchback holds its own against both established rivals and recent newcomers, with the tested Sport model making a strong “performance for the price” argument.