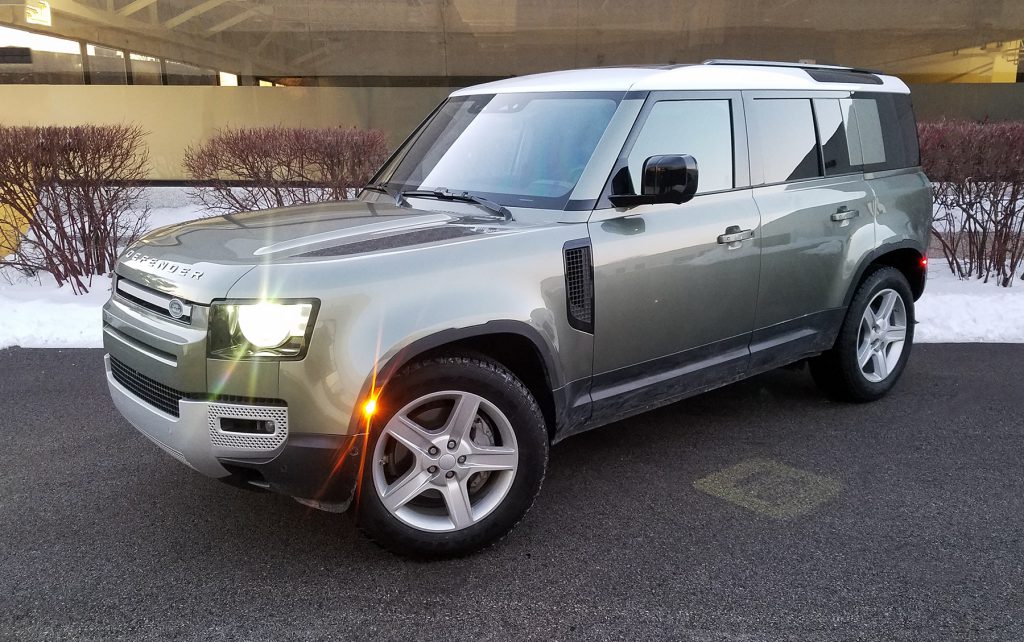 The good: Adventurous, concept-vehicle-style styling inside and out

It’s not unusual for an automotive legend to spawn a modern sequel these days. Anybody who has seen, say, a Volkswagen New Beetle, a Toyota FJ Cruiser, or a Jeep Gladiator knows that to be true. However, when the replacement for an icon gets reinterpreted, that’s a pretty rare thing. 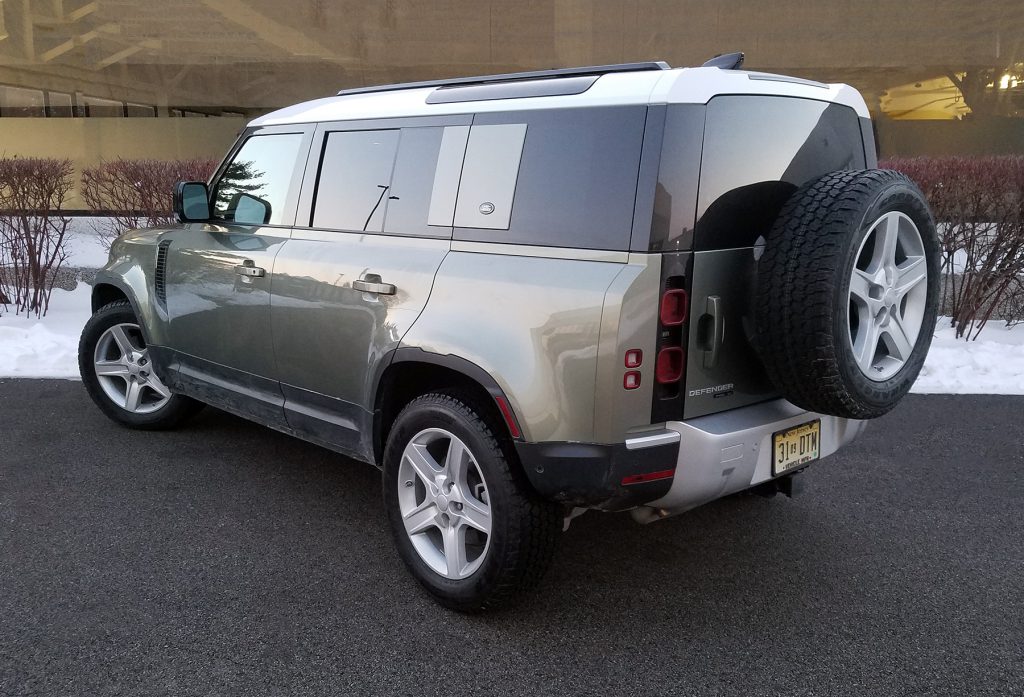 The new Land Rover Defender tips its hat to the burly, boxy profile of the original, but its look is much more sophisticated and modern, with avant-garde styling details that look like they belong on an auto-show concept vehicle.

The Land Rover Defender compact sport-utility that arrived on the market during 2020 is just such a curiosity. It trades on the image and reputation of the Defender that was last sold in the U.S. in 1997 (though it continued in other global markets until 2016), but that vehicle line dated to the early Eighties as the successor to the legendary original Land Rover found wherever the road ends the world over since 1948. 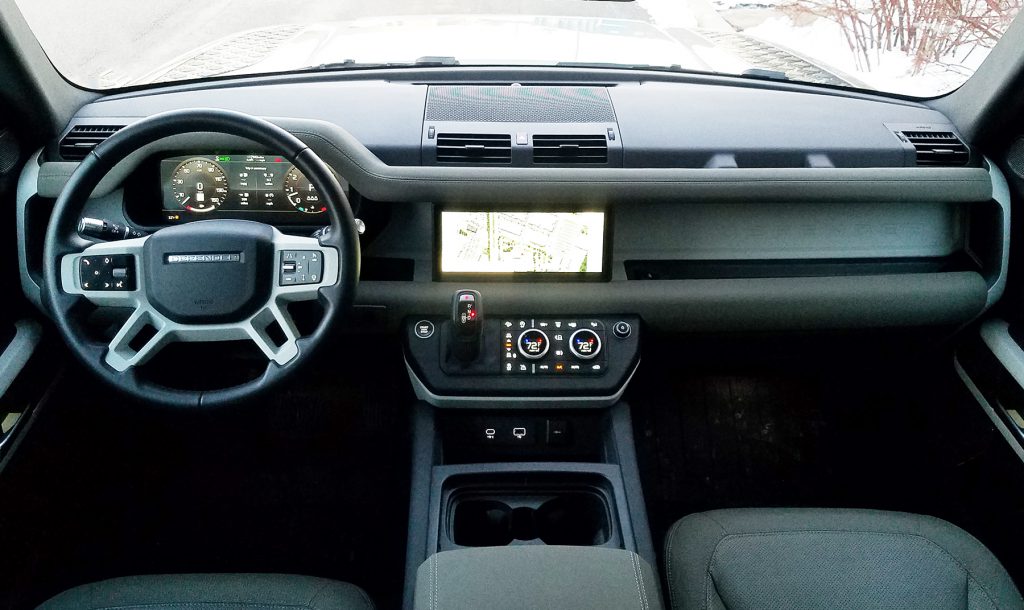 The new Defender’s dash is stylish and functional, with a digital gauge cluster and high-mounted HVAC vents. A storage shelf stretches across most of the dashboard (there’s even an open area behind the infotainment touchscreen). 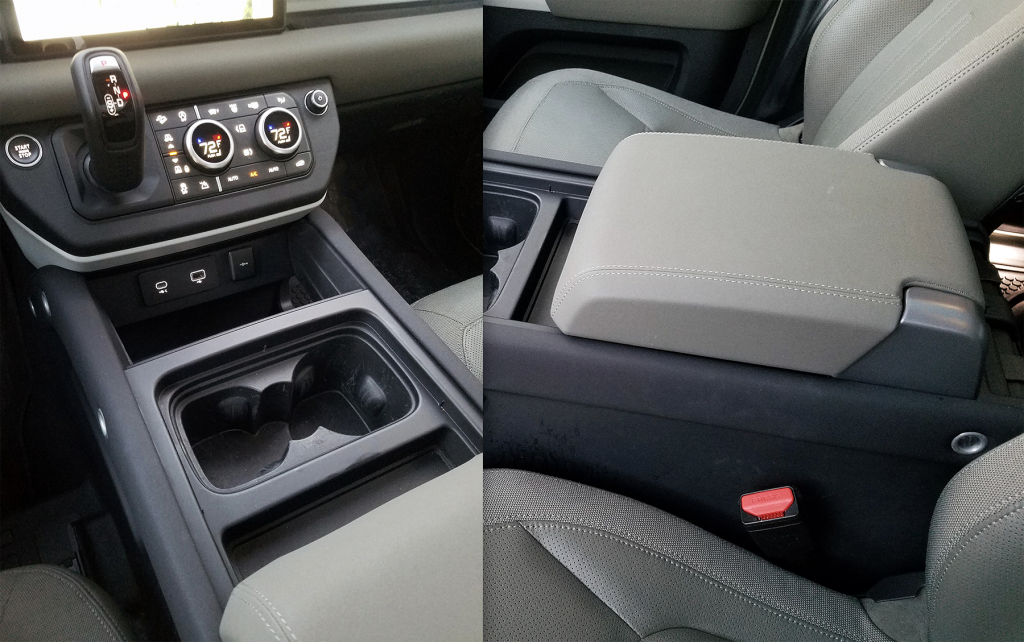 We found the unconventional dashboard-mounted shifter a bit awkward to use. There’s a generously sized console-armrest storage bin, and an open area on the console itself below the USB charging ports and power outlet.

When the Defender last reached the USA, it had body-on-frame construction and solid axles. The new model replaces them with an aluminum unibody design—Land Rover says it is the stiffest body it has ever produced—and 4-wheel independent suspension. The 110 has a 118.9-inch wheelbase and can seat up to seven passengers with an optional third-row seat. Its “little brother” is the 2-door Defender 90 on a 101.9-inch wheelbase and room for as many as six, thanks to a center jump seat that allows 3-abreast seating in front. 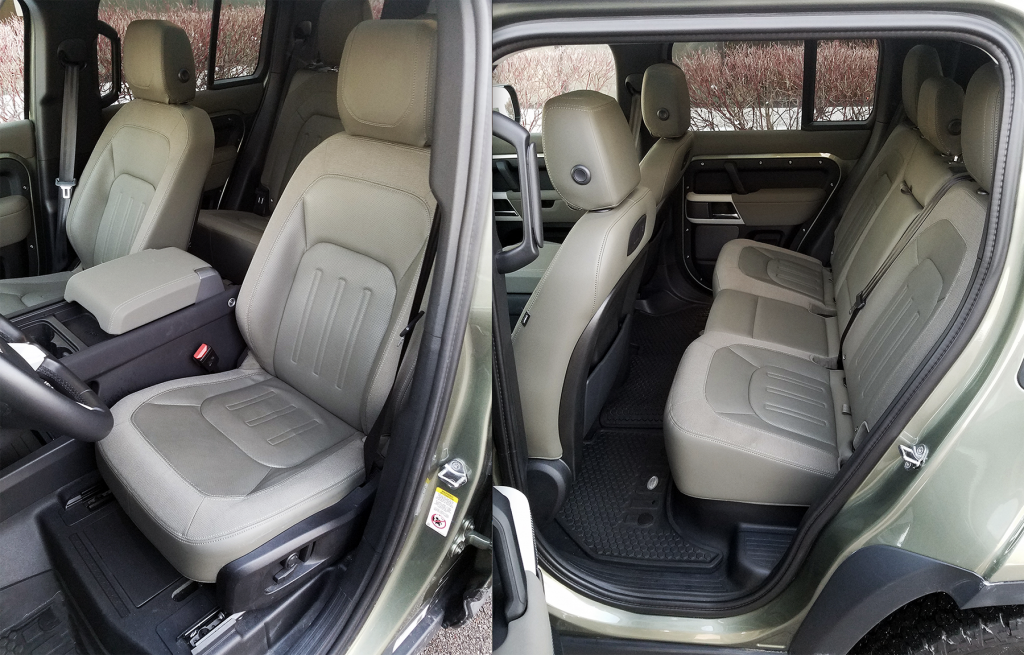 The high-mounted seats are comfortable and attractively upholstered. The tall, upright roofline makes for excellent headroom in both the first and second rows, and legroom is decent as well.

Slab sides, flat side glass, a tailgate-mounted spare tire, and “skylight” windows along the sides of the roof forge stylistic links to the former Defender and its forebear. The cabin is off-road chic. CG’s tester had an earthy color combination, with mossy-green Khaki materials on the seats, console, armrests, and portions of the dashboard against Ebony panels. There’s just a bit of soft—but sturdy-looking and feeling—material here and there, yet areas of exposed painted-metal show through the doors. SE seats are trimmed in leather but with hardy woven-textile facings. The washable hard-rubber surface of the cargo floor continues up the backs of the 40/20/40-split seats.

The Defender’s side-hinged swing gate can be cumbersome in tight spots, but it’s cargo volume is quite good for the class: 34 cubic feet behind the rear seats, and 78.8 cubic feet with the rear seats folded to create a flat load floor.

A 296-hp turbo 2.0-liter 4-cylinder is standard, but our tester was equipped with the Defender’s step-up engine choice: a gutsy 395-hp turbo 3.0 6-cylinder with mild-hybrid capability. Twenty-inch alloy wheels are standard equipment.

Some of the options added to the test truck delivered enhanced versions of certain standard items. Among them were adaptive cruise control and—in the Advanced Off-Road Capability Pack—All-Terrain Progress Control, Terrain Response 2, and configurable Terrain Response that allow drivers to tailor powertrain and chassis performance to the vehicle’s surfaces and surroundings.

The P400 3.0-liter straight six is turbocharged to deliver 395 horsepower at 5500 rpm and 406 lb-ft of torque at 2000 rpm. It’s a generally quiet engine that exhibits good jump away from stops with enough strength to tow up to 8201 pounds. With the help of the smoothly operating transmission, it performs well on the highway, maintaining good cruising speed with the readiness to pass smartly when asked. Even augmented with a 48-volt mild-hybrid system, fuel economy is not one of the 6-cylinder Defender’s strengths. EPA ratings are 17 mpg in the city, 22 mpg in highway operation, and 19 combined. However, this driver notched just 13.6 mpg from a 67.3-mile test stint of which 40 percent was city-type driving. 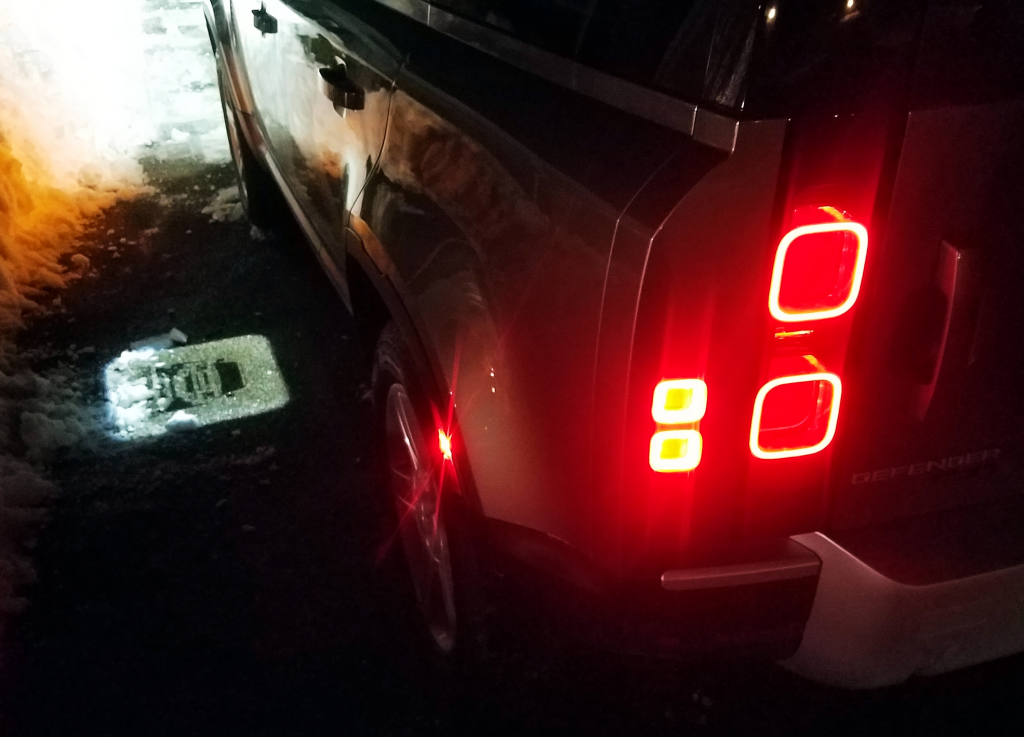 Defender rides well for being Land Rover’s most off-road-oriented SUV. The 110 handles easily, with the Adaptive Dynamics system continually reading wheel and body movements to control body roll, and it is pleasantly maneuverable. The standard electronic air suspension can shift ground clearance from 8.6 inches to a more off-road-helpful 11.5 inches.

There is fine head- and legroom in both seating rows of the 5-passenger 4-door model, and a flat floor makes 3-across seating possible, at least for kids. Fairly tall windows and an upright roof design contribute to good driver vision around the vehicle. It’s quite well isolated from exterior noise, too. One bothersome aspect to the test truck was a maladjusted left-rear door that wasn’t keen on opening without a really good yank.

The PIVI Pro Infotainment has touchscreen tuning. Inputting audio presets makes sense with some study. Favorites are saved at the tap of a star icon, but station choices are arrayed all over the screen. It’s not the easiest-to-use system we’ve seen, but it’s not nearly the hardest. The climate system has handy dials for temperature settings and a small cluster of plainly marked buttons for functions like fan, mode, and defrosters. The vehicle-info screen between the speedometer and tachometer dials is large and easily manipulated through thumb buttons on the steering wheel.

As for storage, glove and console boxes are skimpy, but a tray runs the width of the instrument panel (save for the area taken by the steering column). There’s floor-level open space, and pockets in all four doors. The side-hinged tailgate opens from the left—opposite of “curb loading” in left-hand-drive markets. There’s useful cargo space in back, with more available with the rear seats retracted—though they don’t drop full flat. There is a little underfloor bin for small-item storage, and a long tray on the inside of the tailgate.

There are more luxuries to be had—for a price—and starting tabs for some Defenders top $80,000. But this Land Rover certainly concentrates on delivering off-road bona fides designed to do its ancestors proud. 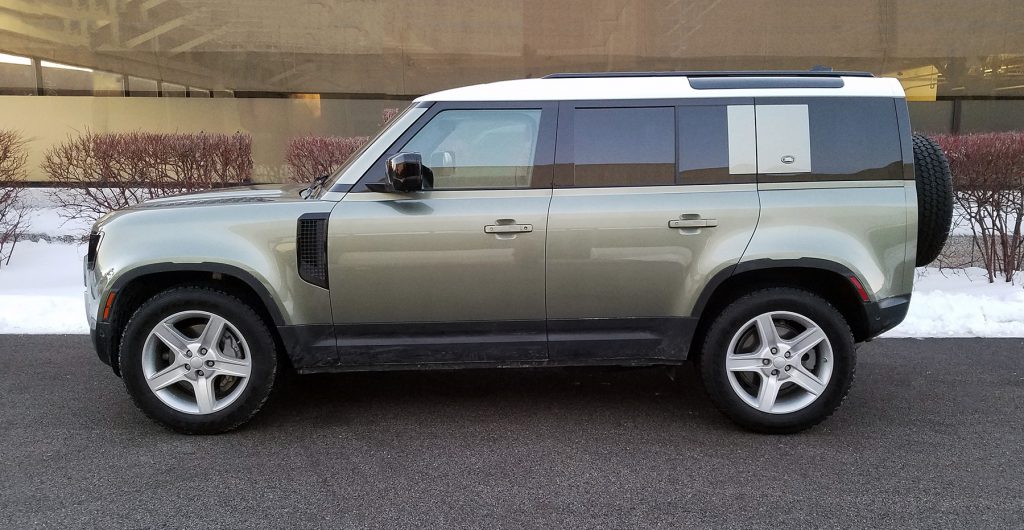 The new Land Rover Defender 110’s profile view shows off its boxy profile, roof-mounted “safari windows,” rear-mounted spare tire, and extra-short front and rear overhangs–all features of the iconic original, but brought into the 21st century with a high level of sophistication–and a rather steep as-tested price tag to match. 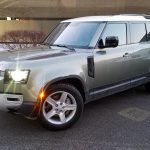 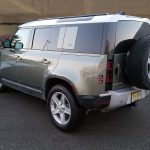 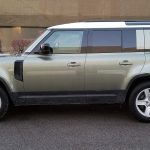 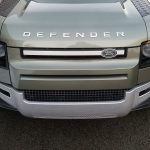 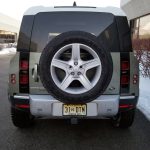 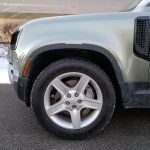 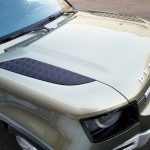 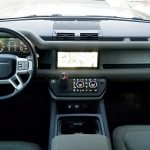 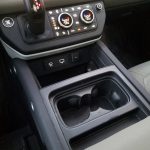 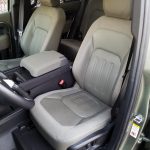 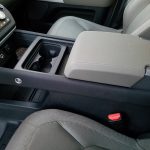 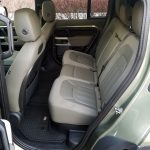 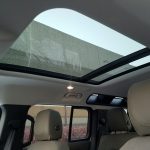 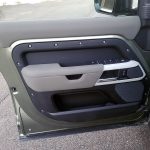 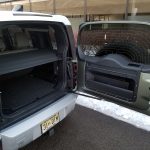 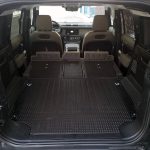 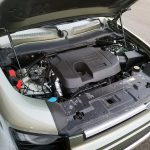 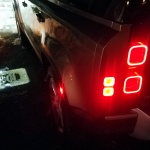