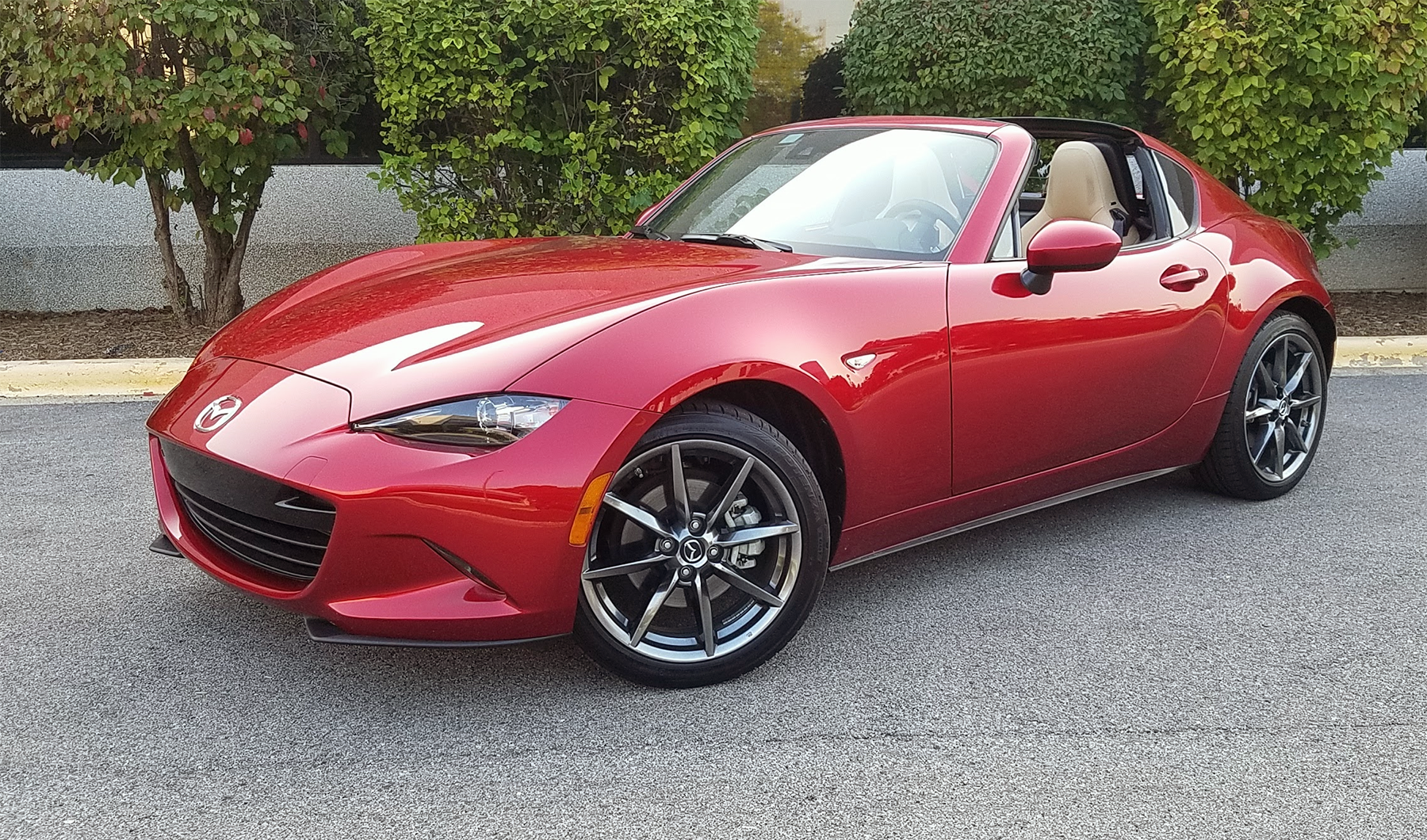 The not so good: Space for both people and cargo is especially stingy; top-up headroom with retractable hardtop is even tighter than it is in soft-top Miata

With 30 years and a boatload of plaudits behind its MX-5 Miata, you wouldn’t be surprised if Mazda let its attainable little sports car coast on its reputation now and then. Fortunately, it hasn’t succumbed to that temptation.

The 2020 model continues the Miata’s fourth generation, which was inaugurated for 2016 with a shift from cute to purposeful looks, a weight-trimming aluminum-intensive platform, and—for better or worse—the addition of a modern infotainment system. The following year saw the addition of the RF with targa-top style when the forward roof section and rear window are retracted into the deck. In 2019, an infusion of horsepower delivered the most powerful Miata ever sold in the U.S. Sprinkled in among these major developments were added features and expanded standard equipment. 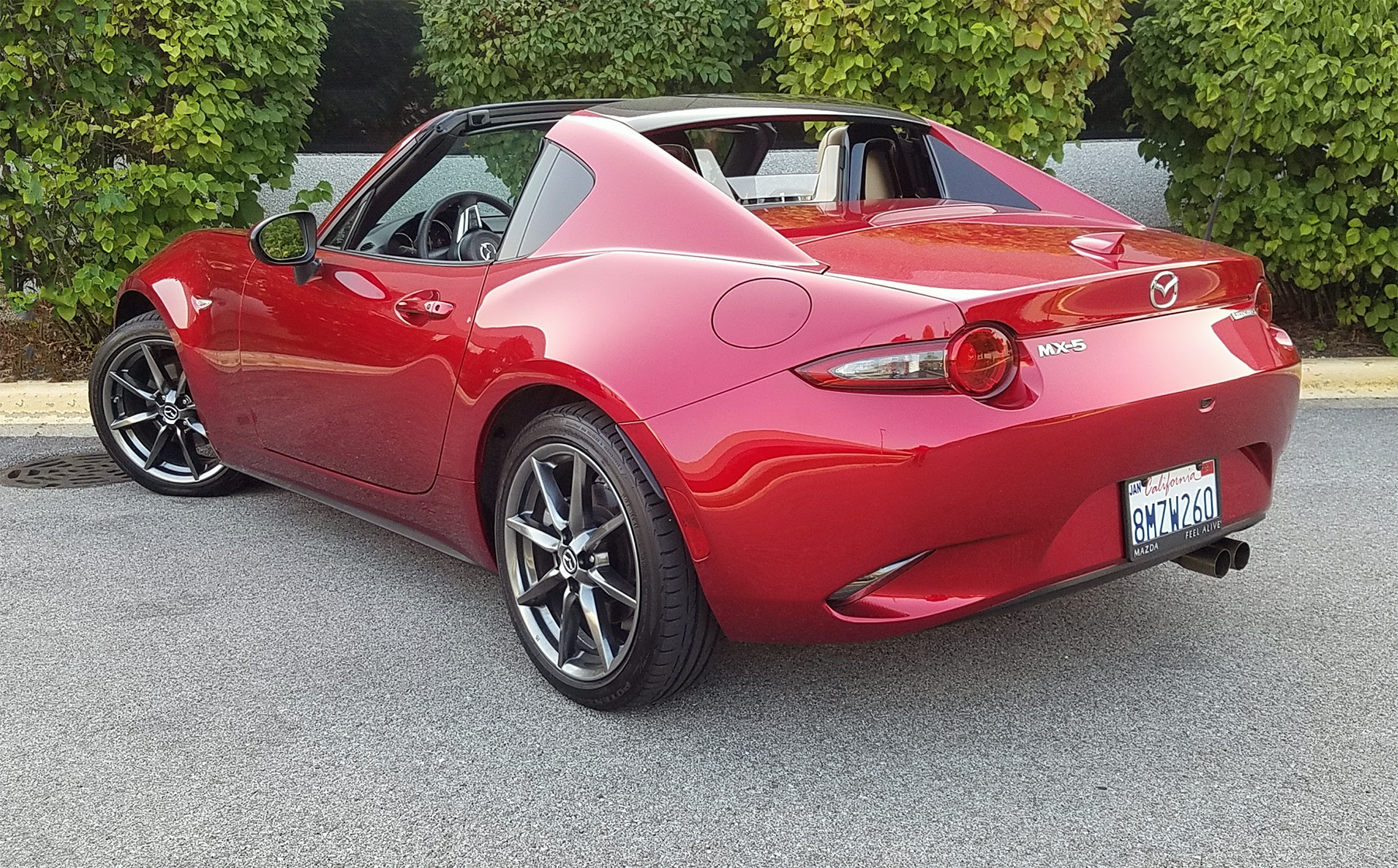 The “RF” stands for retractable fastback. Instead of the manual soft top on the regular MX-5 Miata, the RF has a power-retractable hardtop. The entire rear roof section pivots up, and the center roof section and rear window retract for a targa-top-style convertible experience.

A ’20 RF in top-level Grand Touring trim that Consumer Guide tested encompassed all this. Plus, it had the limited-slip differential and sport suspension that are newly standard in Grand Tourings with the precise and cooperative 6-speed manual transmission. Lesser Sport and Club models—the former available only as a roadster—are now granted standard low-speed automatic emergency braking, blind-spot alert, rear cross-traffic alert, and lane-departure warning, and Clubs also add Apple CarPlay/Android Auto smartphone functionality.

In topline Grand Touring trim, the Miata’s cabin has a classy look and feel, thanks to standard upscale touches such as leather upholstery, heated seats, Bose audio system, and a navigation system. Though we’re not particularly enamored with the console-mounted infotainment control knob, the Miata’s manual shifter is one of the best in the business.

The test car logged in at a starting price of $35,345 with delivery, and it didn’t budge much from there. Only an application of luminous Soul Red Crystal paint ($595) added to the vehicle’s final price. Grand Tourings don’t need much more because they are attractively turned out inside and come pretty complete. In addition to the items already mentioned, standard equipment includes: 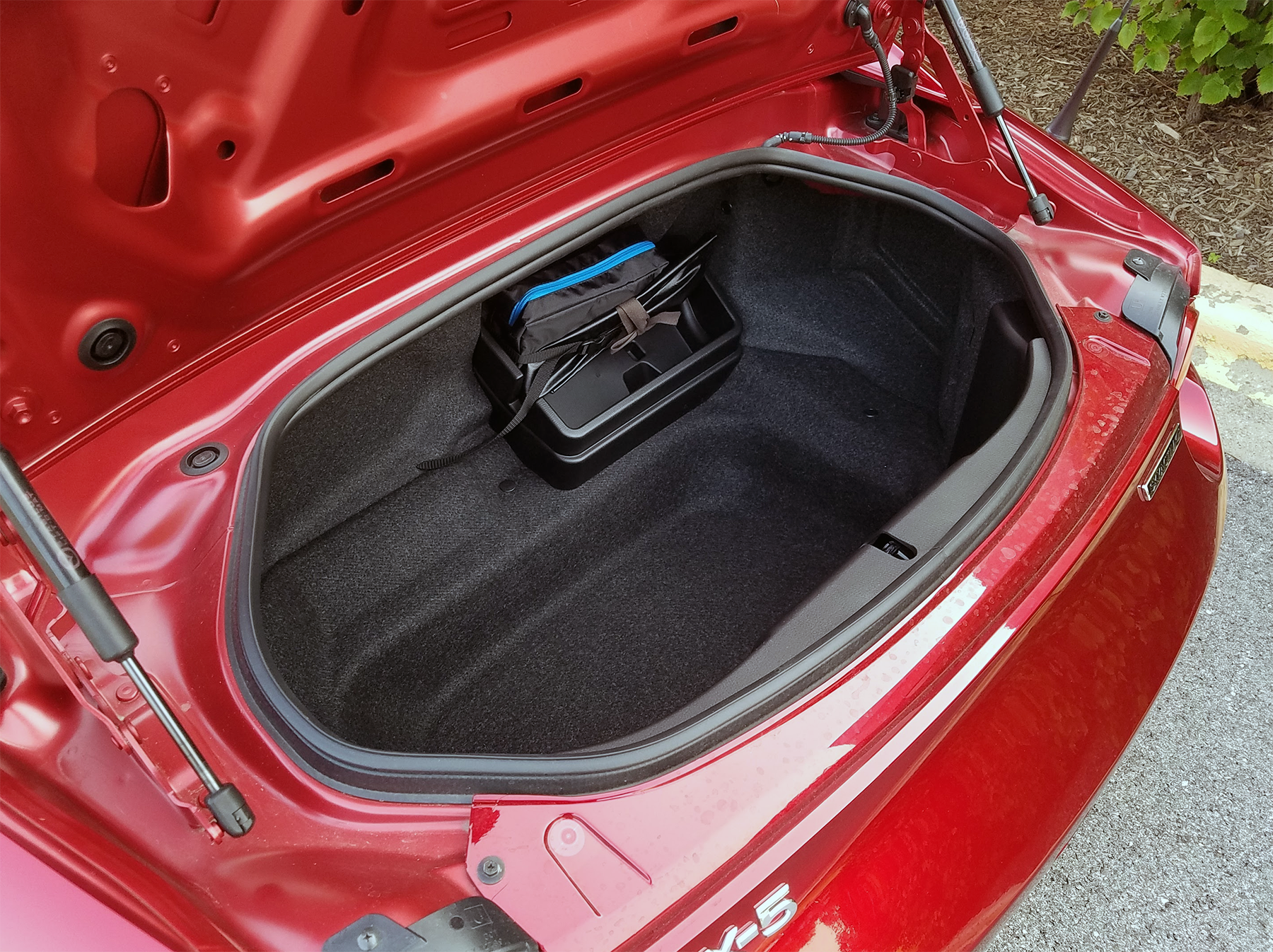 Beating away under the aluminum hood is the revvy 2.0-liter naturally aspirated SKYACTIV-G 4-cylinder engine of 181 horsepower and 151 lb-ft of torque. The car is decidedly snappy off the line, and for as much fun as the manual gearbox and nicely balanced clutch are to use in the Miata, you don’t have to flog them a lot to maintain decent pace at every little slow-down. The report from the sport-tuned exhaust plants an aural cherry atop this sweet sundae driver. Speaking of which, you might just go nuts for the fuel economy. The EPA estimates are 26 mpg in the city, 34 mpg on the highway, and 29 combined. This reviewer’s 62 miles in the test car—32 percent of which was city-type driving—showed 34.9 mpg when he topped off with the requisite premium gas.

Even with the sport suspension with Bilstein shock absorbers, the Miata RF’s firm ride never crosses over into stiff or hard. With suspension stabilizer bars front and rear, a brace running between the front shock towers, and quickly responsive steering, the car is ready to corner and make transitions without feeling that it wants to come apart. A tight turning circle makes it extremely maneuverable in close quarters. It is arguably a little noisier inside with the roof closed—a job that takes about 14 seconds—but wind buffeting when the RF is opened up is less than in the Miata roadster.

There are certain quirks to the fourth-gen Miatas to which owners will have to adapt in exchange for the satisfying performance. Interior storage is commensurate with the car’s petite dimensions: a small glove box between the seat backs, a tiny covered space in the console, and insert-type cup holders that can be snapped into the back end of the console or on its right side (near a passenger’s left knee). A hard-to-reach 12-volt power point is tucked up under the passenger side of the instrument panel. The limited amount of stuff that can fit in the small trunk has to be dropped in because the lid basically is a hatch. (That said, the Miata’s low profile means low liftover height, and piston-style hinges don’t cut into any of the 4.48 cubic feet of cargo space). Seating position is low, and interior room—particularly headroom when the top is closes—is in short supply for anyone too much more than 6 feet tall. RF drivers will find over-the-shoulder vision obstructions, particularly to the left, but the straight-back view isn’t much more limited than in a roadster with its fabric top raised.

The 2016 Miata redesign allowed the manufacturer to install its Mazda Connect infotainment system, which registers on a 7-inch color touchscreen. However, accessing audio, navigation, or other features requires working with the complicated and distracting Commander Control dial on the console. It’s not one of our favorite things about a car we like a lot. On the other hand, the 3-dial climate controls are a cinch to operate. White-on-black analog driving gauges and a 4.6-inch color vehicle-information display in the cluster are well-placed and easy to read.

Miata owners can always enjoy cruising in their car because Mazda hasn’t allowed itself to cruise on the MX-5.

Though it doesn’t see any major changes for 2020, the MX-5 Miata continues to deliver pure sports-car driving fun with excellent refinement and livability in everyday driving. However, the cabin is extra cozy even for average-sized adults, and top-up headroom is even tighter in the RF models than it is in the regular soft-top Miatas. 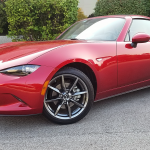 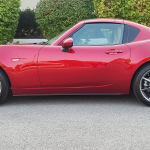 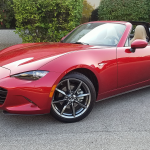 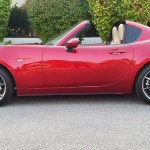 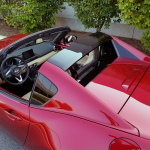 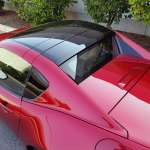 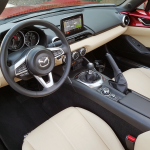 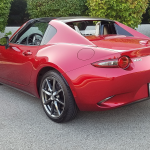 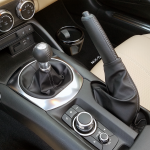 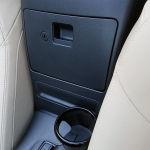 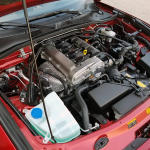 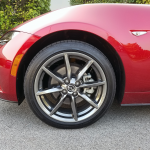