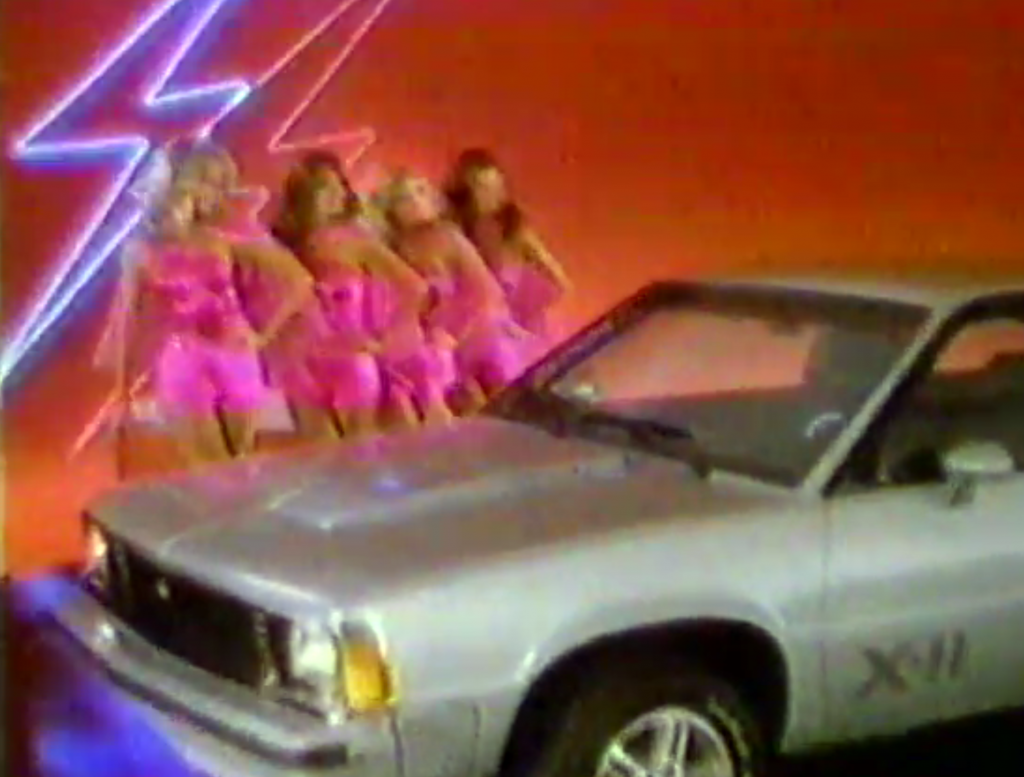 Is this a scene from the worst car commercial of all time? Read on…

For as relatively new a form of communication as television is, the content broadcast via that medium ages incredibly quickly. In terms of style and language, it may be difficult to tell a book written in 1920 from one penned a couple of decades later. Television history, however, is well defined by rather short epochs, and none is more easily recognizable or uniquely self contained than the Eighties.

There was a vacuous aesthetic to the Eighties that is difficult to define. The broadcast products of the decade were seemingly all decked out in pastel neon and accompanied by synthesizer music. Not that every Eighties TV show was bad, but many of them were. For Every Hill Street Blues there were several shows like Small Wonder.

I would suggest that to get a really good feel for the decade of Miami Vice and Milli Vanilli, you check out the TV ads. Here I have collected six of what I feel are the worst car ads of the decade. One of which–the Chevrolet Citation commercial–is arguably a candidate for worst TV commercial of all time. You can decide that for yourself.

If there’s a car ad you particularly like or dislike, please tell us about it. The place to leave comments is down below.

This isn’t just the worst car ad of the Eighties, it is quite possibly the worst television ad of all time. The producers of this 30-second spot could not have intentionally engineered the ad to seem more dated and, well, creepy. Why is “Single Guy” wearing satin briefs and silver boots? Who are those women? More importantly, this commercial is for the Citation X-11, one of the performance bright spots of the early Eighties, yet there’s only a passing mention of the car’s legitimate sportiness.

I realize I am reading WAY too much into this, but I find several elements of this manic Toyota Tercel spot annoying. First, the unlicensed Tarzan character is bad at swinging from vines and is afraid of wildlife. Secondly, the chimps fully are dressed, which seems odd when all the humans are less modestly attired. But most annoyingly, the Tercel is not among the first 30 or so vehicles I would consider purchasing were I a jungle resident. I am amused, however, that there’s a Weber grille in front of the tree house.

In terms of affordable longevity, The Volkswagen Beetle was the stuff of legend. Anyone with a ball-peen hammer and a little Krazy Glue could keep an air-cooled VW running for 250,000 miles without even consulting the owner’s manual. So, for the marketers of an Eastern Bloc-assembled car based on a dated and largely unloved Fiat design to compare their product with the Beetle is nothing short of profane. No surprise, the Yugo did not turn out to be reliable, or long-lived–either on the road or in the marketplace.

The word “sport” is right there in the car’s name, so why does this commercial feature a car plodding along at low speed to the background music from a whale-sounds cassette? The ad does feature a swimsuit model, and I can appreciate that, but as to her interest in the Celebrity? She can do better.

Ah, the delicious irony! This 1989 Sterling ad’s punchline, if you will, is the disappointment felt when you learn that neither Sean Connery nor Roger Moore is behind the wheel of the car, despite the Bond-movie theme music. Turns out, disappointing customers was exactly what Sterling was all about. Though based mechanically on the Acura Legend, the Sterling 800-series cars were built in England by Rover, and suffered from a litany of embarrassing problems–including chipping paint, broken trim bits, and countless electrical gremlins. Perhaps the only thing more surprising than finding Patrick Macnee in a Bond-themed TV commercial was the crushing financial blow Sterling owners suffered when it came time to trade in their cars.

I realize that this ad aired in 1991, but it just feels so Eighties that I had to include it on this list. I have nothing but love for Leonard Nimoy, but this unintentionally campy minivan ad does nothing to help sell the public on the buying an Oldsmobile. The crummy graphic elements aside, I really wish the Olds advertising people would have just paid up for a Star Trek licensing deal, because the awkward Trek/space references are wince-inducing. Enterprising family? Really? Ugh.