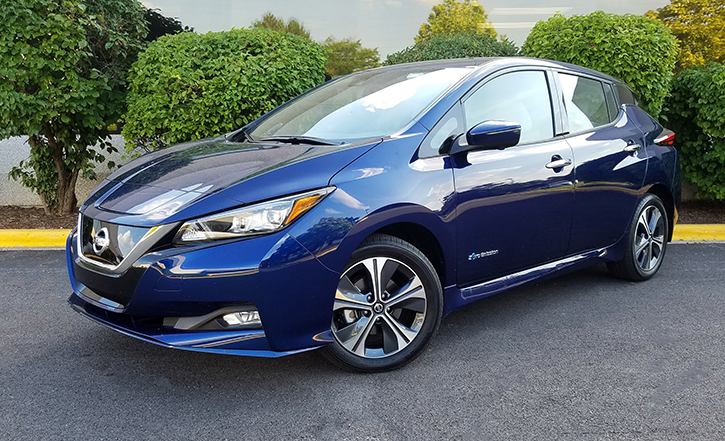 It’s a reasonable expectation in the automotive world that each year’s new version of a given car will offer more than the one before did. It’s practically demanded from a vehicle the manufacturer calls “PLUS”—and in all capitals no less. 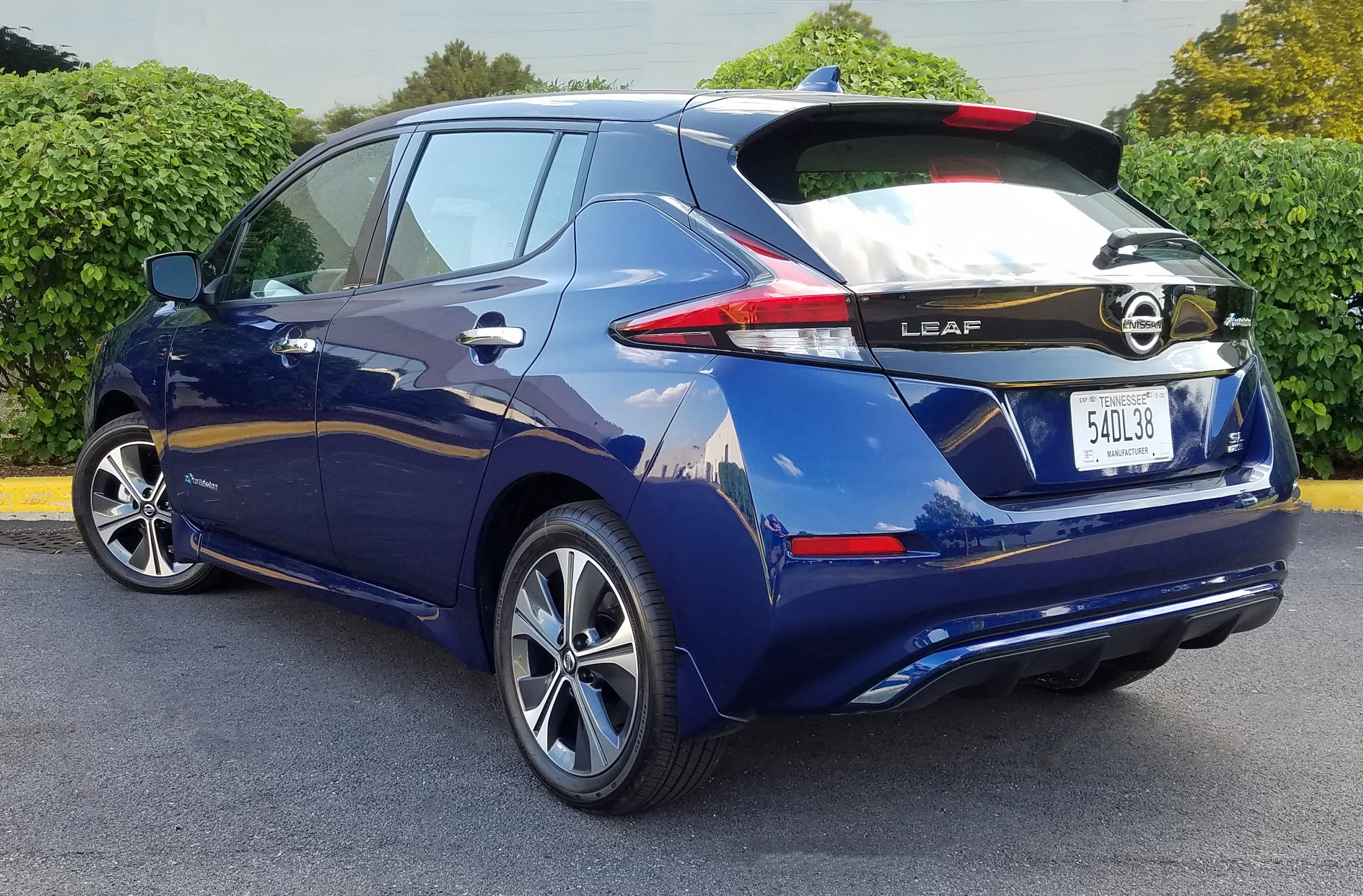 Though the Leaf’s styling communicates the car’s EV status, there are a number of styling flourishes–such as the “boomerang” taillights and beltline “kick-up” at the rear roof pillar–that add visual interest.

In line with that, Nissan’s full-electric LEAF compact hatchback enters the second year of its second generation with the addition of a second motor-and-battery combination that increases horsepower and range. The new PLUS variant is available in all three LEAF trim levels, and Consumer Guide sampled the enhanced power unit in a Deep Blue Pearl line-topping SL.

In SL trim, the Leaf’s cabin is outfitted with a number of upscale trim features, including leather upholstery and heated front seats and a heated steering wheel. The unusual “hockey puck” shifter requires a bit of acclimation. The space in the rear-seat area is competitive with most compact hatchbacks.

By the numbers, the differences between the standard and PLUS powertrains are stark. The base system—itself a clear improvement over first-gen output—relies on a 110-kW motor and 40-kWh lithium-ion battery to generate 147 hp and 236 lb-ft of torque. The EPA projects its maximum range at 150 miles. PLUS models have a 160-kW motor with battery capacity of 62 kWh, 214 hp and 250 lb-ft, and projected range of 215 miles in SV and SL cars or 226 miles in the entry-level S.

The beefier power unit provides good linear acceleration. It also puts the LEAF PLUS up to the task of rapid expressway cruising speeds. Of course, there’s no traditional engine noise, which makes it easier to hear the little bit of wind and road racket that flares up in speedy expressway driving.

The Leaf offers a respectable 23.6 cubic feet of cargo volume, which grows to 30 cu. ft. with the rear seat backs folded. The seat backs don’t fold flush with the cargo floor, however, and the subwoofer for the Bose Acoustic Wave audio system (which is mounted just behind the seats) takes up space as well.

It’s hard to tell which is more appreciated—the added oomph or an operating range that doesn’t begin playing with your mind 10 minutes into your drive. However, taking advantage of the heightened power does come at the expense of some ultimate distance.

When this reviewer had the car, he ran it a couple of times late at night on lightly traveled city expressways, which permitted runs at sustained higher speeds. After four commuting legs for 122 miles, 60 percent of which could have been considered highway-style driving, the LEAF PLUS reported 82 miles of range and 34 percent of charge remaining. Another full round trip seemingly would have been possible, but this driving style was lowering range into the vicinity of 200 miles. Following a partial recharge that restored the battery level to an indicated 70 percent and 166 range miles, another 90.0 driving miles (45 percent city) left the car 25 percent charged with a remaining range of 58 miles.

The “Plus” in the Nissan Leaf Plus’s name refers to its larger battery pack (62 kWh instead of 40 kWh) and more powerful motor (160 kW instead of 110 kW). The charge ports are located under a “mini hood” at the front of the vehicle.

Note that with air temperatures in the 70s and low 80s, air conditioning was being used, but so—at times—were ECO drive mode and the regenerative E-Pedal function that can fully brake the car after some coasting.

When the PLUS was at 34 percent of charge left, it was plugged into CG’s  240-volt “level 2” charger. A complete recharge would have taken eight hours; as it was, 3.5 hours of sucking on the juice box got the battery back to 70 percent. When yours truly next ran the battery down to 24 percent, full replenishment would have required an estimated 9.5 hours. 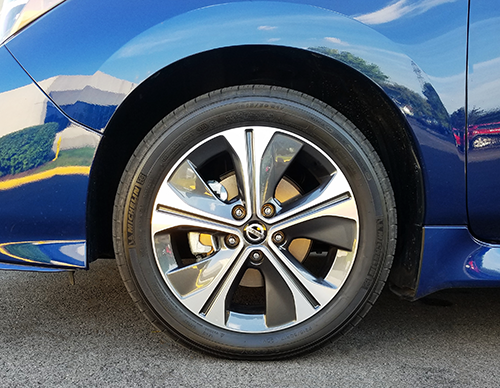 The cost of adding PLUS gear varies by trim level. For the SL, it comes at a $6250 premium, which raised the starting price (with delivery) of the test car to $43,445. A trio of individual options established the final figure at $43,930.

No matter what you pay for a 2019 LEAF, it will include Rear Door Alert, an added standard feature that reminds drivers to check the rear seats (most critically for pets or progeny) when exiting the vehicle. The SL PLUS comes loaded with just about everything the LEAF has to offer. Indeed, its standard-equipment list includes automatic emergency braking with pedestrian detection, Nissan’s Intelligent Lane Intervention system, ProPILOT Assist that pairs adaptive cruise control with automatic lane-centering steering assistance, an electronic parking brake, and automatic headlight high-beam control—a suite of items that constitutes a $650 option package for the lower-powered SL.

What hasn’t changed from the 2018 introduction of the generation-2 LEAF is its nimble handling, smooth ride, and sense of roominess for its overall size. Cargo space is pretty good, and gets better when the 60/40-split rear seats are down. However, it is still subject to limited personal-item storage for passengers’ stuff, and a tilt-only adjustable steering wheel that may force some drivers to settle for the best deal they can get in terms of comfort and driving position. On balance, though, it is an impressive electric-vehicle entry that has indeed delivered more in its second year. 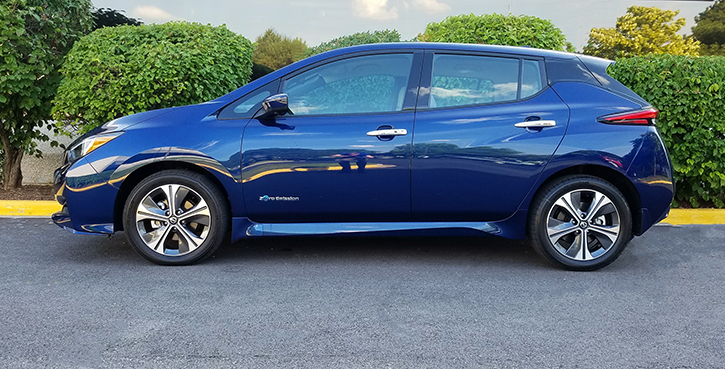 For the sophomore season of the second-generation model, the Nissan Leaf’s newly available motor and battery-pack upgrade gives it much improved range and notably improved acceleration.