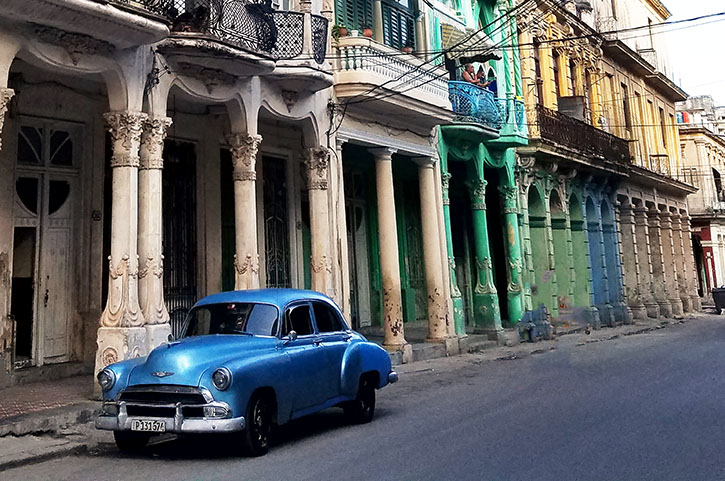 Cuba is something of a paradise for old-car spotters. This 1951 Chevrolet four-door sedan is just one of thousands of vintage automobiles still in faithful use as daily-driver transportation.

My wife Kristin and I will be celebrating our tenth wedding anniversary this year, and we decided that we needed to take an out-of-the-country vacation as part of that celebration. We were looking for somewhere reasonably close, to minimize flight time and the jetlag that usually goes along with it. Kristin is fond of Latin American countries, bird watching, and rugged-outdoors adventuring, and she speaks enough Spanish to get around quite well. Me? I really love old cars. Cuba checks all those boxes, so it was a natural choice.

We spent a week there on a small guided tour with three other tourists and one guide (all of us fitting into our guide’s Chinese-built Maxus G10 minivan).  We flew into Havana and stayed there for a couple days, and then drove on to Cienfuegos and Trinidad before transferring to Santa Clara for our flight back to the States.

So, how is it that there are so many vintage vehicles—particularly 1950s American cars—still on the road in Cuba? A long answer, but we’ll try to nutshell it: Cuba was an enthusiastic consumer of American vehicles from the teens to the 1950s, but the Cuban Revolution in 1959 changed all that. With the country’s transition to a Communist government under the leadership of Fidel Castro, its relationship with the United States soured, and before long the U.S. government had banned all trade with Cuba. Not only were new American cars no longer available to Cuban customers, replacement parts became inaccessible as well. And, the country’s shift to a socialist government meant that resources became rather scarce all around for most Cubans.

That old saying “necessity is the mother of invention” is on display everywhere in Cuba—especially in those old vehicles. After the American trade embargo was enacted, Cuba turned to other countries for its automotive needs, but all those American cars weren’t just put out to pasture. The average Cuban citizen has little to no disposable income, and Cuba’s semitropical climate means old vehicles don’t deteriorate as quickly as they do in less-hospitable locales. Using plucky, shadetree-mechanic ingenuity and whatever parts and supplies they can get, Cubans have become very adept at keeping their tired old machines running.

Though there are some surprisingly well-preserved examples, most of these cars are far from pristine, and factory originality is far less important than basic functionality. Body-trim pieces are often missing or “improvised,” and non-stock headlights, taillights, and turn signals are often adapted to fit. Modern-day off-brand aftermarket wheels and tires (many of which are imported grey-market-style from Miami, I was told) are commonplace, as are engine transplants. Few of the old cars here still possess their original powerplants; most have been swapped out in favor of more-modern diesel engines for fuel-economy purposes. Regardless of the motor, modern emissions controls don’t seem to be in use at all. Air quality, particularly in the cities, is not one of Cuba’s strong points.

One of the most frustrating parts of the trip for me was coming across amazing vehicles and not being able to snag a photo for whatever reason (usually the car in question was moving, or I was moving in the opposite direction in our tour van). It was agonizing to spy a jaw-dropping car for about 10 or 15 seconds, and… that’s it. In Havana, I’m fairly certain I saw a late-1980s/early-1990s Mercedes-Benz station wagon, painted yellow and being used as a taxi cab, with the nose of a 1959 or ’60 Studebaker Lark(!) grafted on. I’m still haunted by the fact I couldn’t get a photo of that one. I did grab a good number of interesting shots, however… have a look below.

More cars from around the world 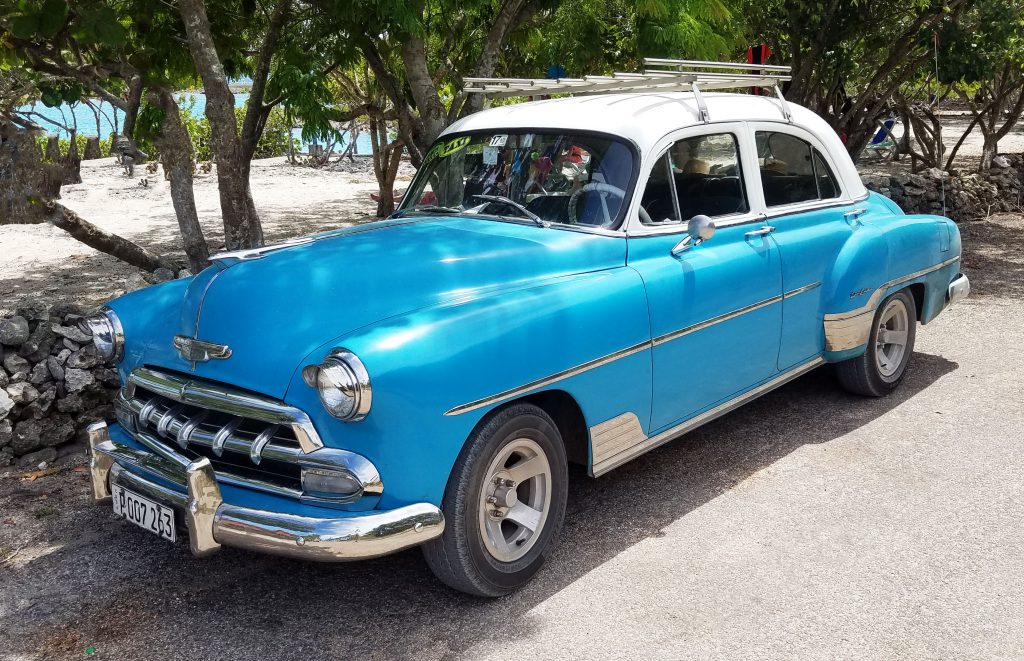 Based on my experience, 1949-52 Chevrolet four-door sedans seemed to be the most common old American cars in Cuba. This ’52 wears accessory headlight shades and a roof-mounted luggage rack. 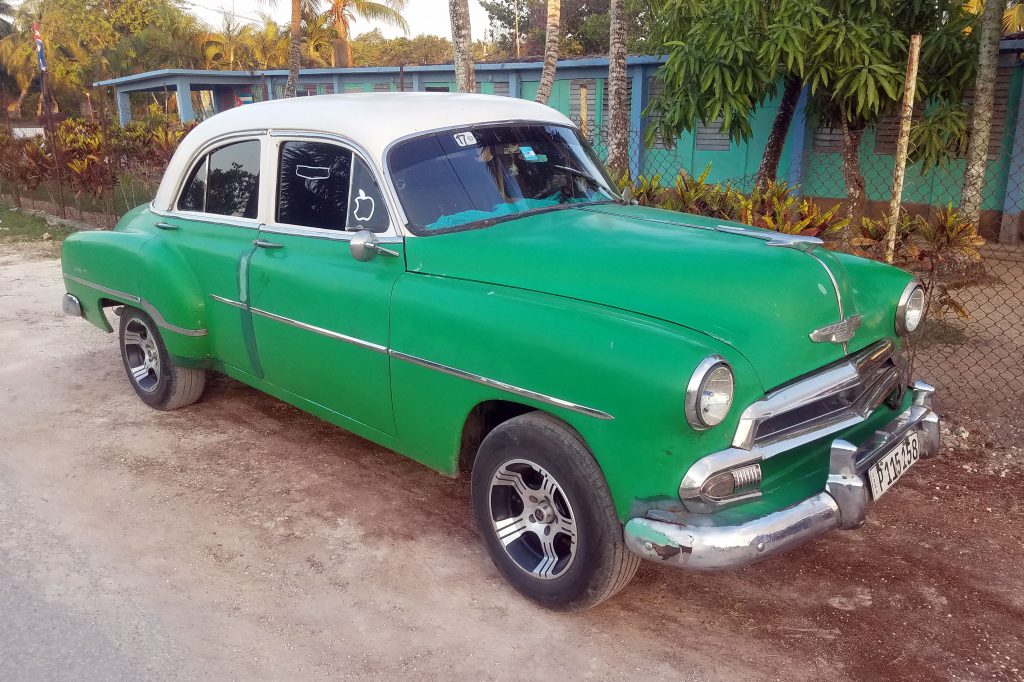 The grille on this Chevy is from 1951, but the side trim (what’s left of it) might be from ’52. Dark window tint helps combat the hot sun. Note the decals on the front passenger-door windows: an outline of a Chevrolet hood badge, and an Apple Inc. logo (even in Cuba, Apple is a revered, aspirational brand). 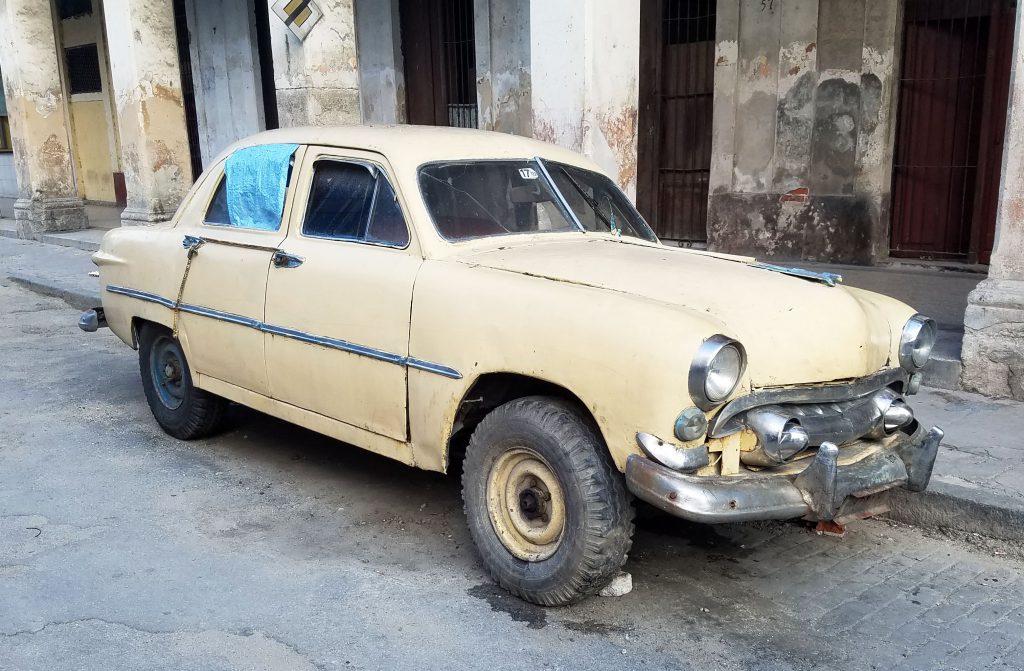 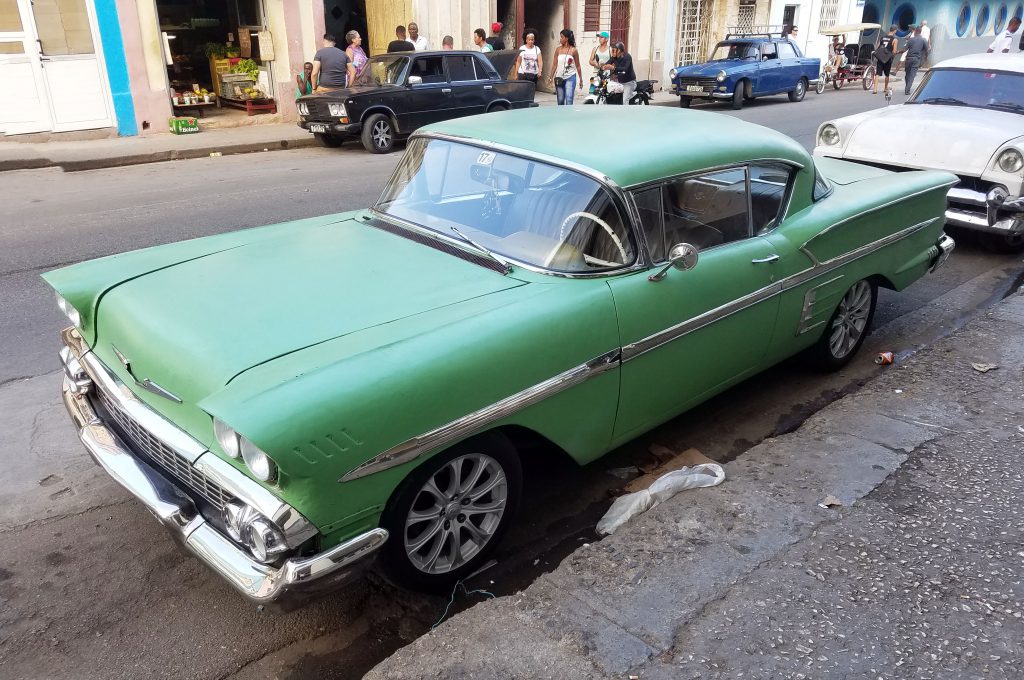 It’s missing a few trim pieces and its original grille, but this 1958 Chevy Impala would still bring good money in the United States. 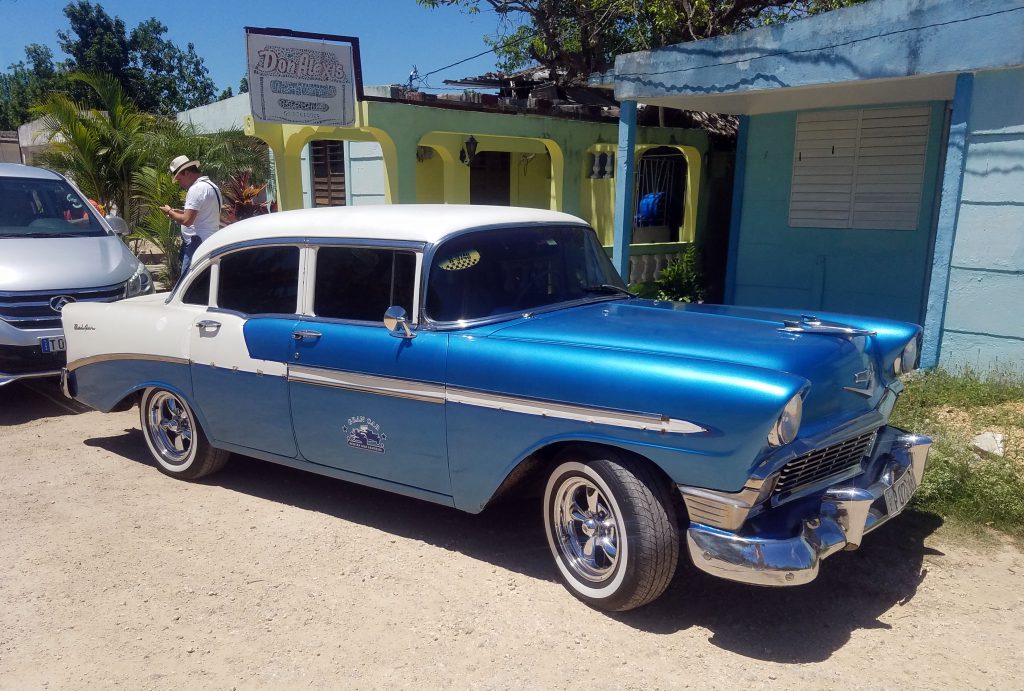 Again, missing some trim pieces, but otherwise quite solid—this 1956 Chevy four-door sedan wears relatively new American Torq-Thrust-style 5-spoke wheels. These were quite common among the cars I saw. 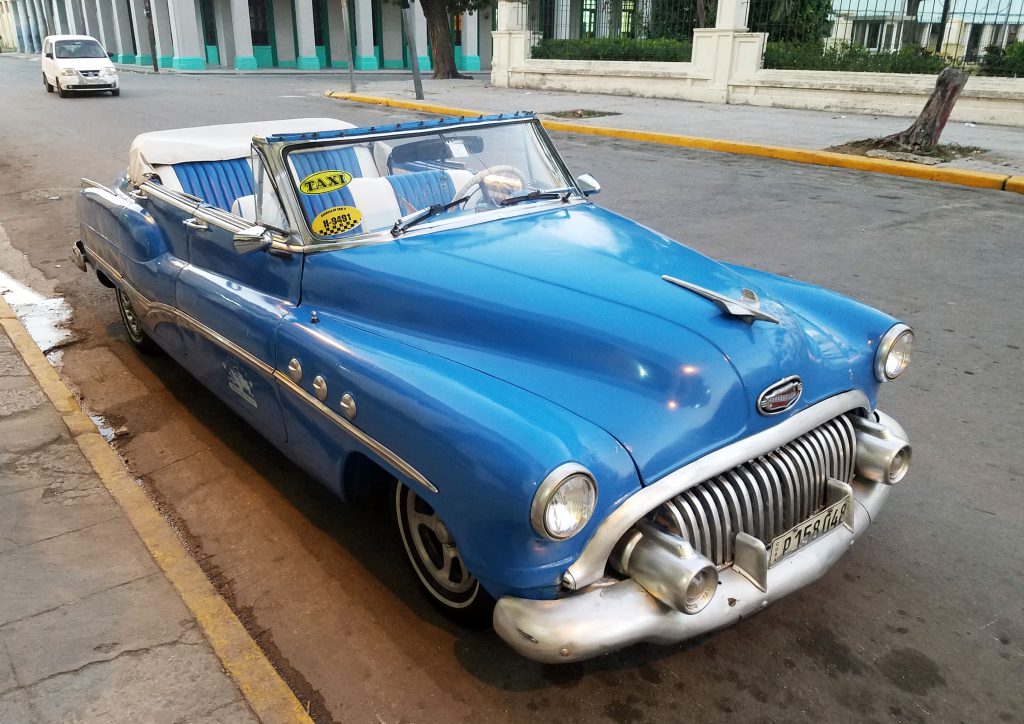 There are plenty of open-air cars in Cuba that weren’t born that way. Buick never made a four-door convertible in 1951, but somewhere along the line this four-door sedan got converted into one. This car was our ride for an hour-long chauffeured cruise around Havana as part of our tour. I’m guessing that chassis bracing was part of the top-removal process, because all of the doors seemed to open and close OK. 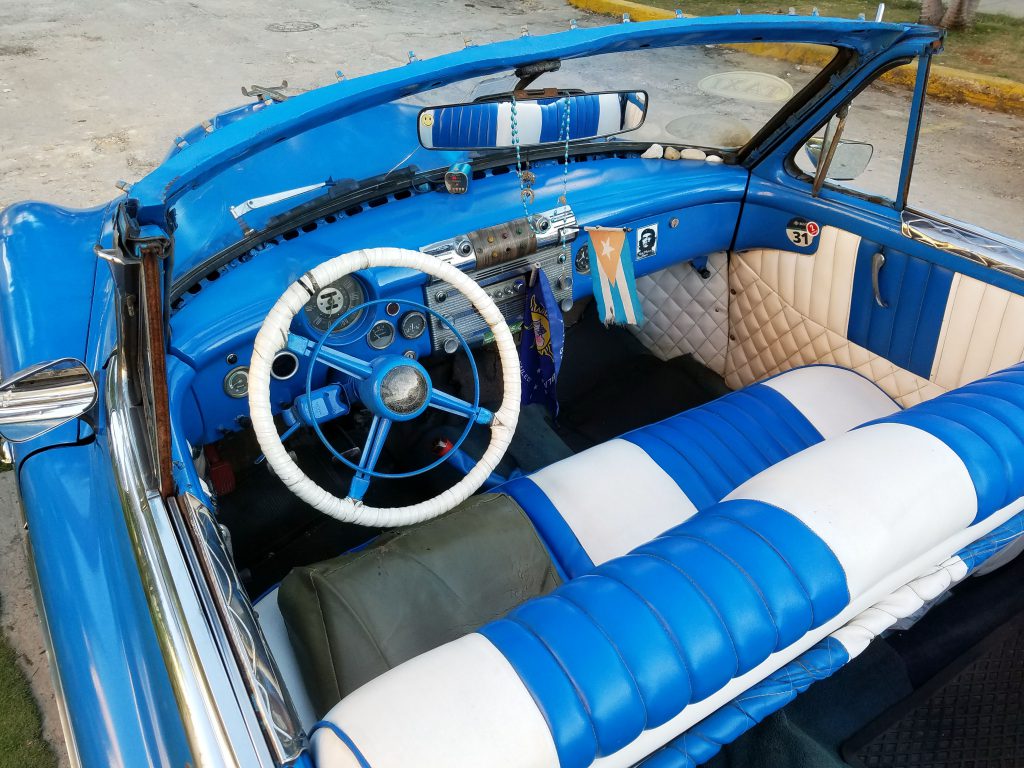 Tuck-and-roll upholstery, a painted and wrapped steering wheel, Cuban flag, Che Guevara sticker, and, for some reason, a few small stones nestled near the base of the windshield were just a few of the details of our Buick’s interior. 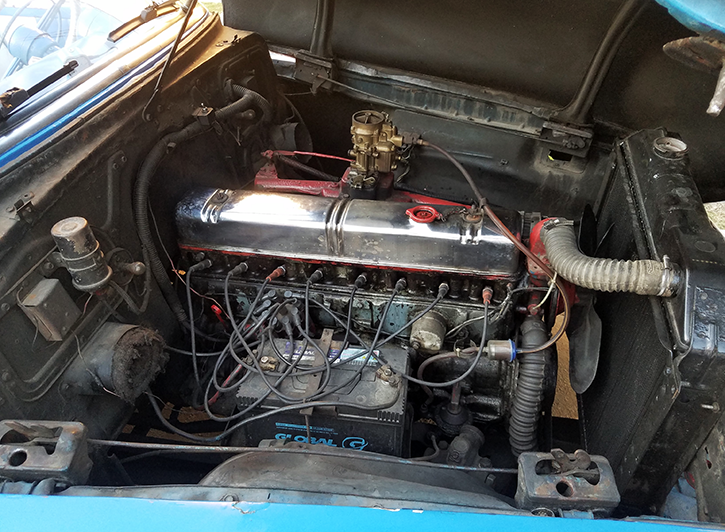 Unlike most cars of its vintage, our 1951 Buick was still powered by its original engine—a 263.3-cubic-inch straight eight. Many, if not most, of the 1950s-vintage cars in Cuba have been converted to later-model diesel engines. 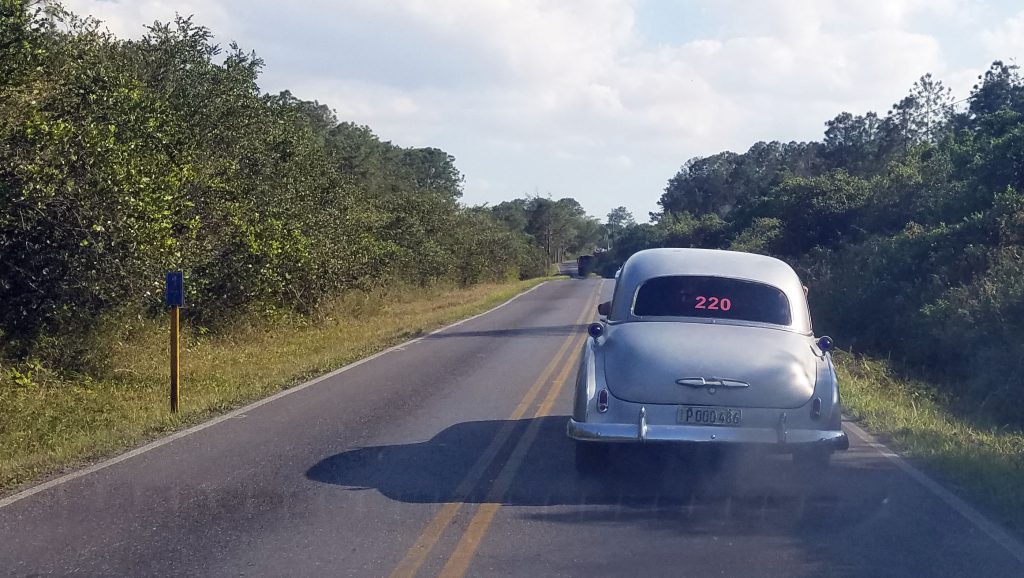 Speaking of diesel engines… I took this photo from the front passenger seat of our tour van; it’s a 50 Chevy emitting a sooty black cloud of diesel smoke. Note the supplemental brake lights mounted atop the rear fenders—a fairly common modification. 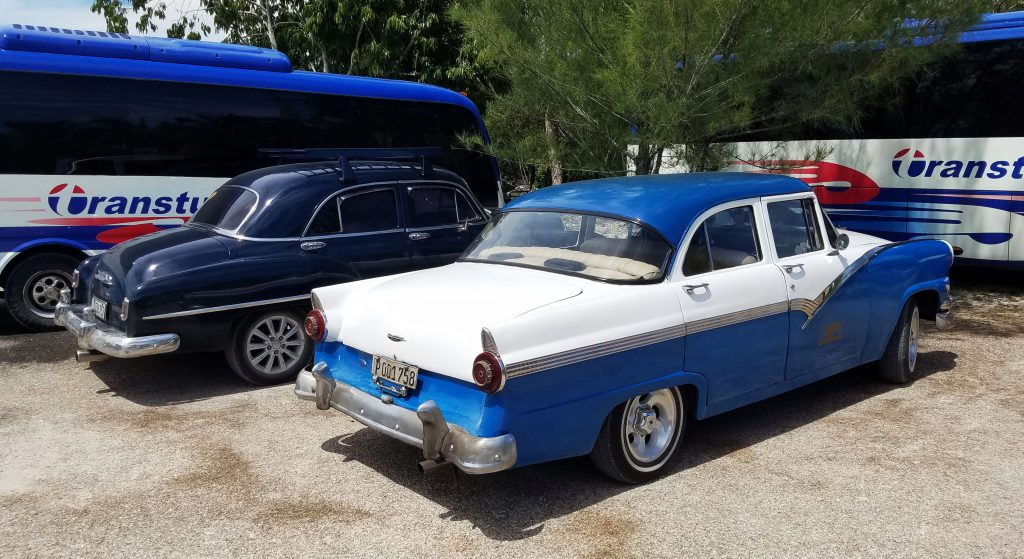 A 1956 Ford four-door sedan wearing what look to be late-1990s Ford Explorer wheels, and behind it a 1952 Chevy with a roof rack. In the background are government-owned Transtur tour buses. We saw plenty of these throughout our trip… all of them were Chinese-made, and none of them appeared to have any sort of emissions-control devices on their diesel engines. 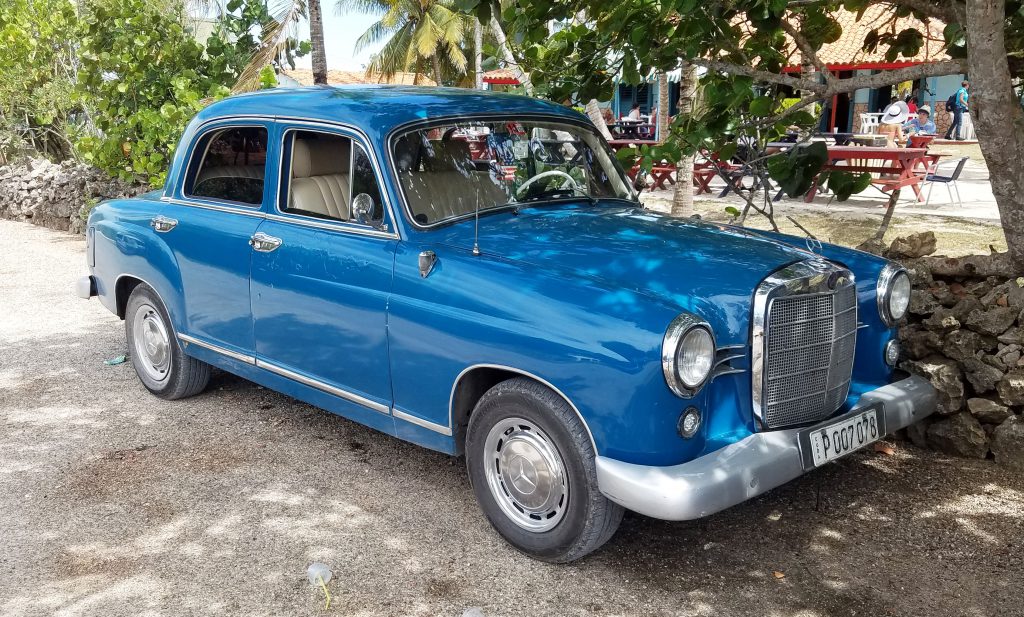 Though American cars dominate, there are a few vintage European cars around as well, such as this Mercedes-Benz “Ponton” sedan. 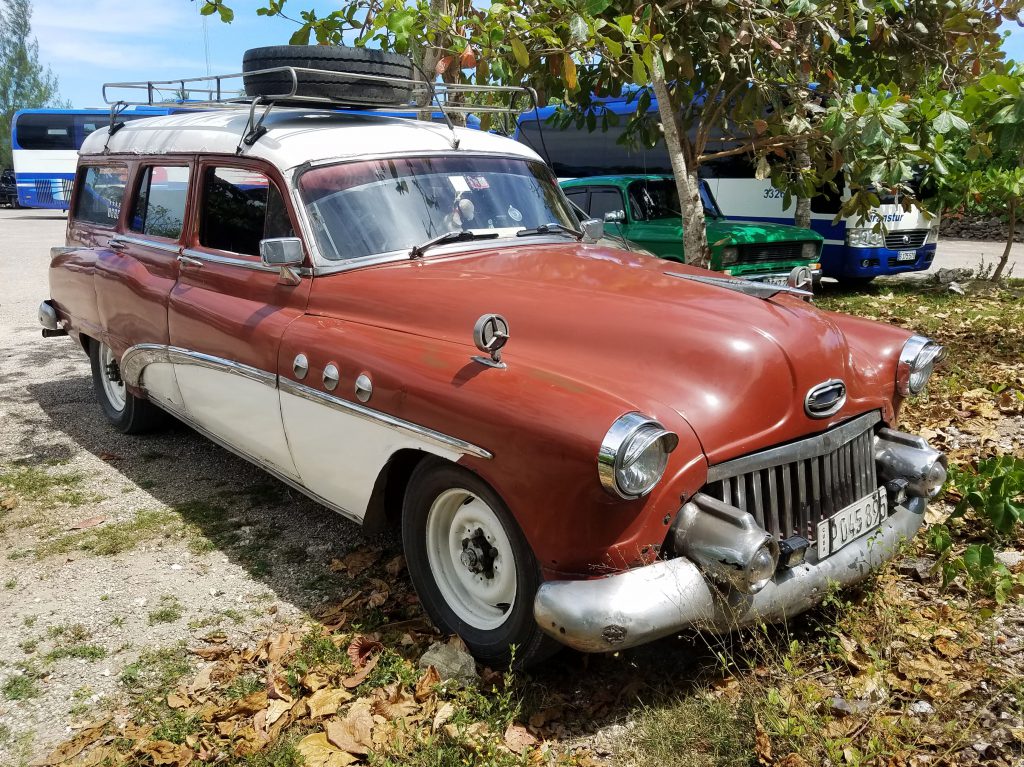 Station wagons are seemingly few and far between, probably because they were relatively pricey when new. This is a ‘52 Buick (with some improvised dental work). 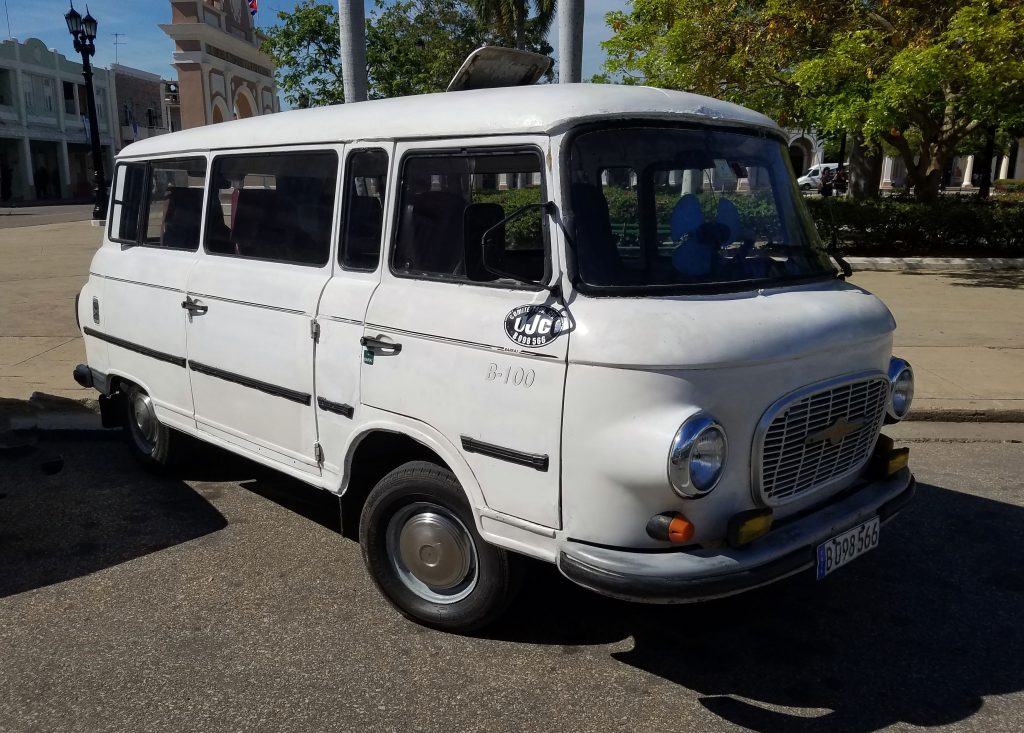 This cab-forward European van had us stumped… anybody know the make, model, and year of this one? 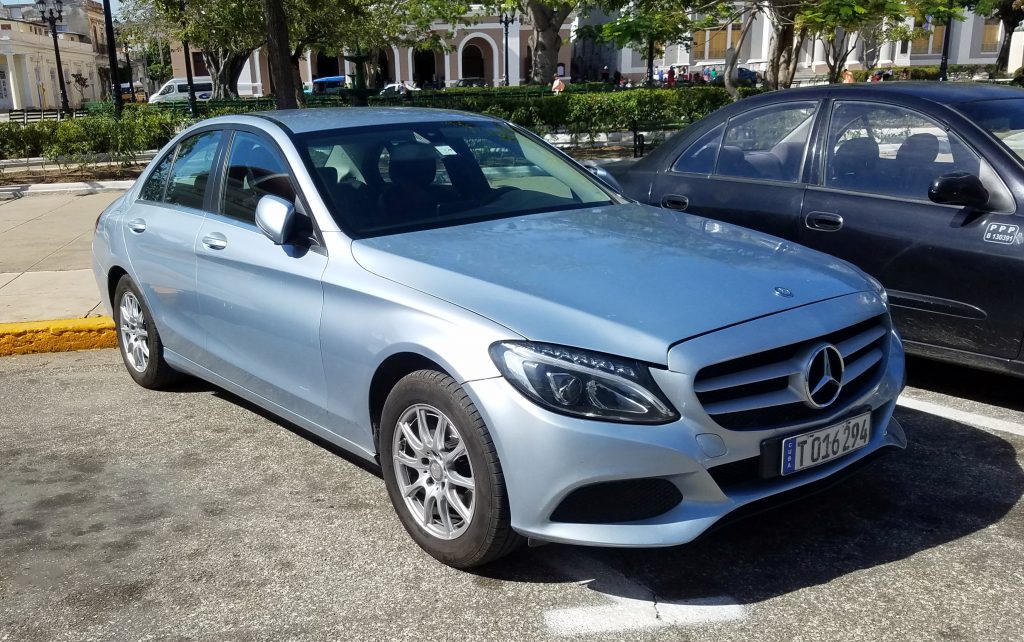 Late-model European luxury cars are very rare, but we came across the occasional Audi or Mercedes-Benz. This is a 2015 or newer Mercedes-Benz C300. 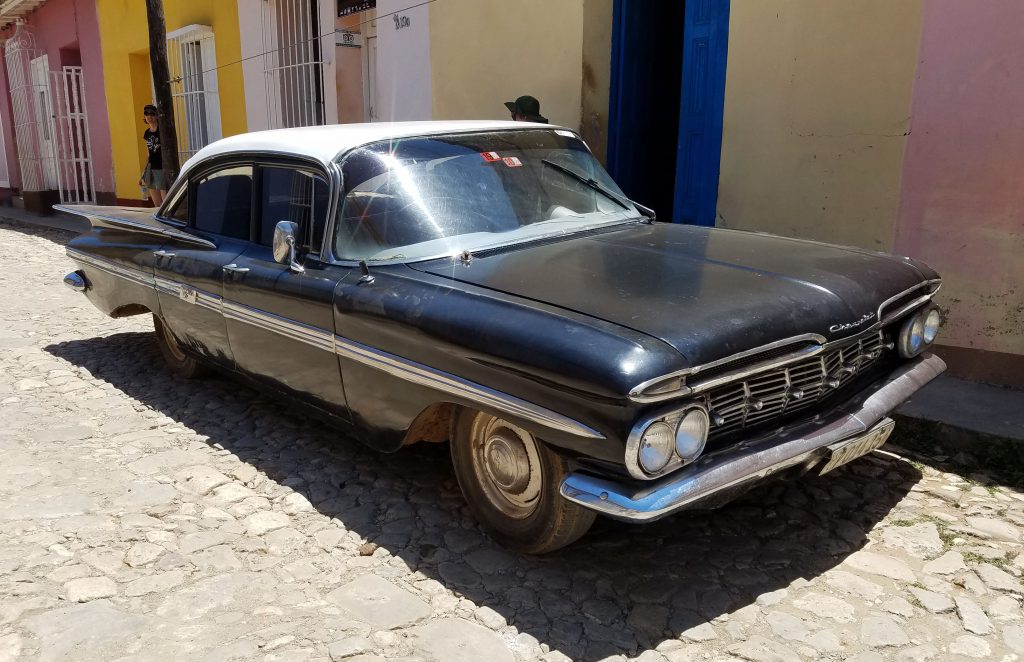 This 1956 Ford F-700 Big Job cab was heavily modified and built into a custom-made tour bus. Our tour guide was familiar with this vehicle, and he told me it is equipped with air conditioning and a large flat-screen TV inside. Given the central role agriculture plays in Cuba, I found it curious that I saw very few light-duty pickup trucks—and not a single one of them was an American make. 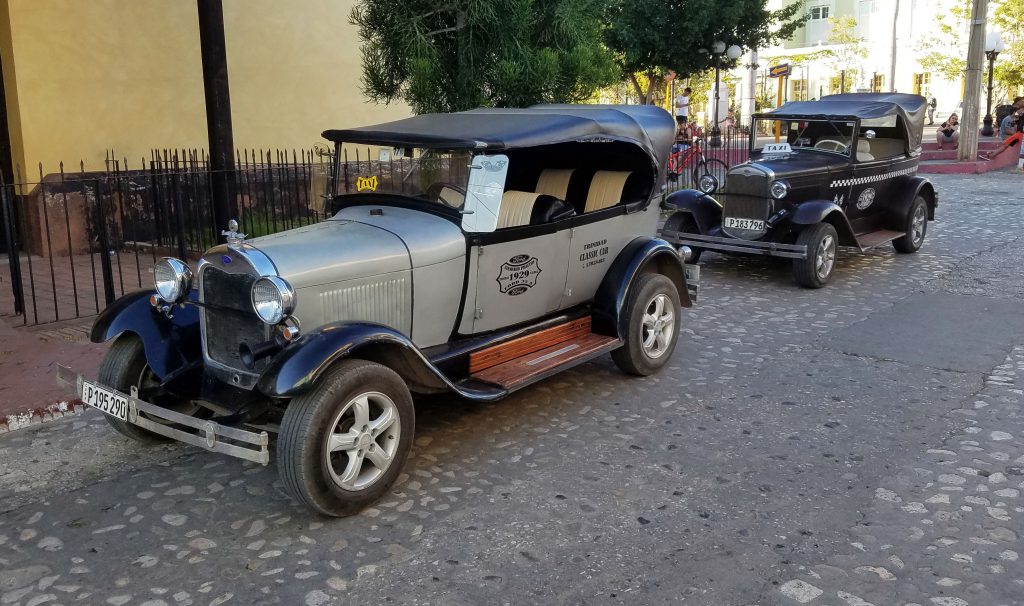 A pair of Model A Fords; the grey 1929 looked to be an original phaeton, while the black 1930 or ’31 behind it appeared to be a converted two-door sedan. 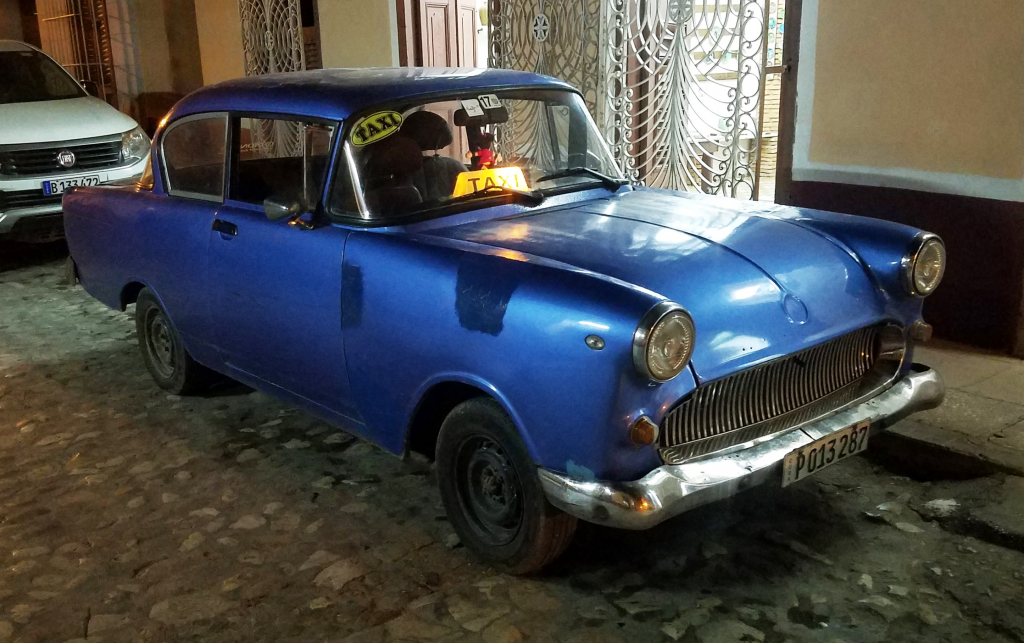 A late 1950s Opel Rekord. Cars used as taxis are required to have windshield stickers identifying them as such. Cuba also has a good number of “regular” yellow-painted cabs. 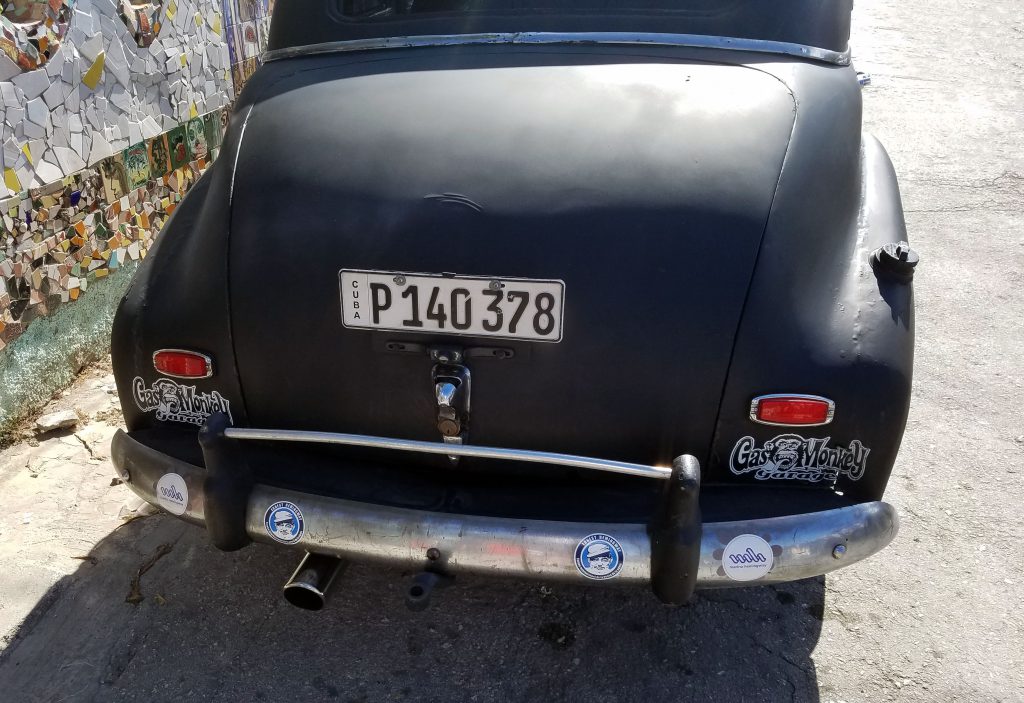 One way or the other, American cable-TV shows must find their way to Cuban viewers. Here are a couple Gas Monkey Garage stickers on a late-1940s Chevrolet sedan. 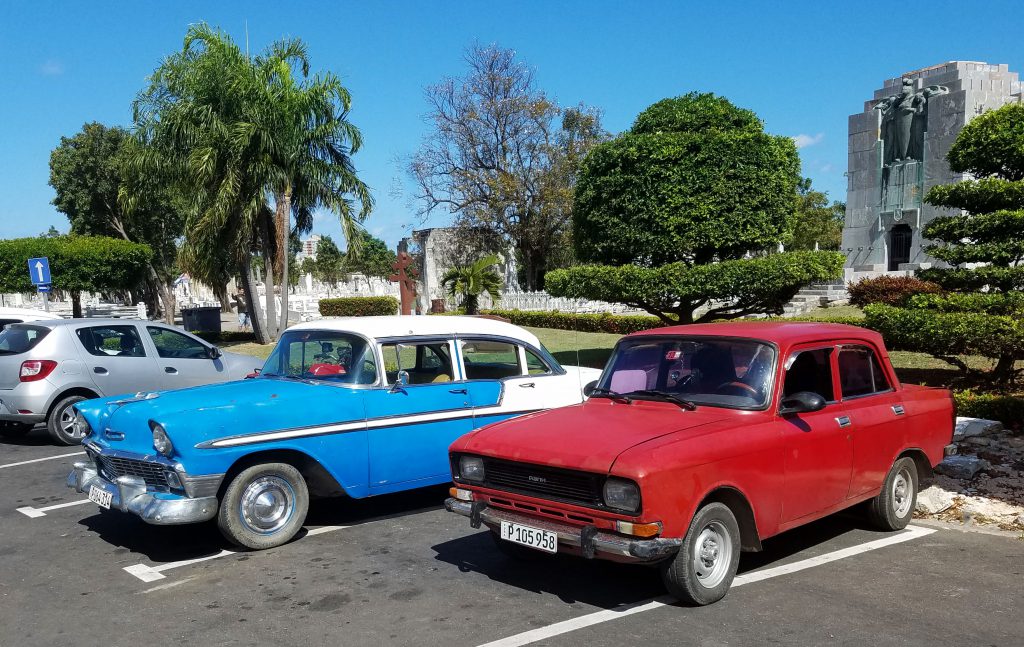 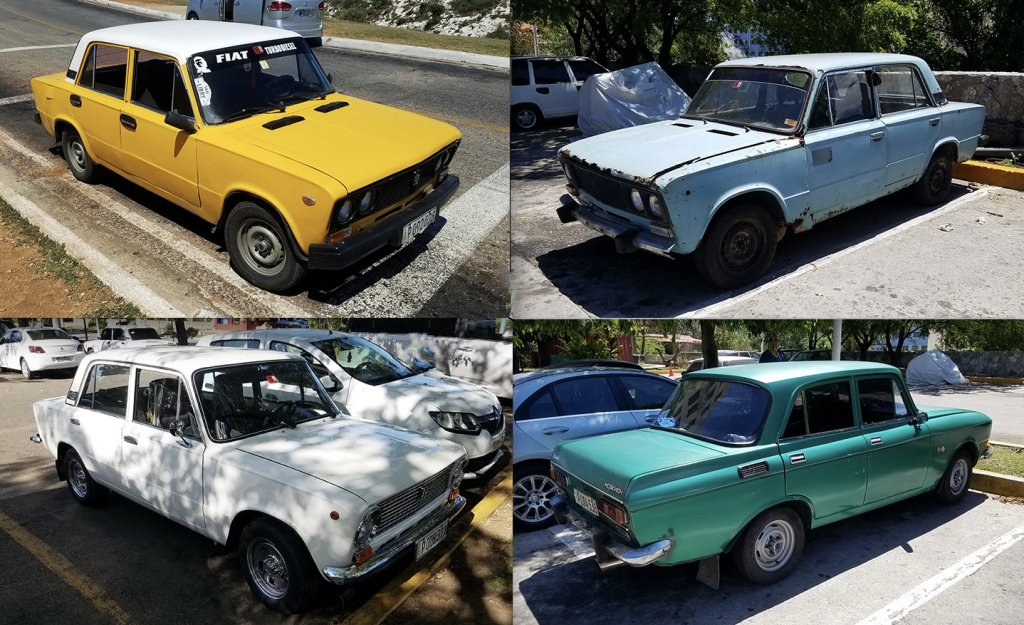 I didn’t see any Volkswagen Beetles that I recall, but boxy little four-door sedans like these—Fiats, Moskvitchs, and maybe Ladas—were all over the place. 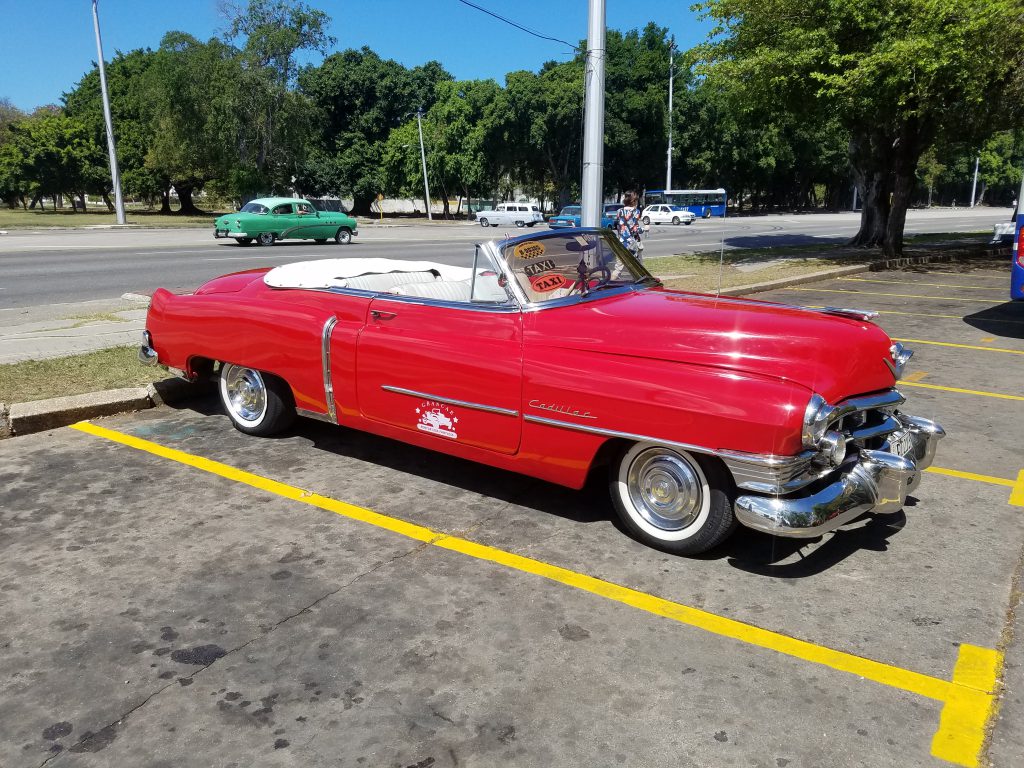 Luxury makes like Cadillac aren’t as common as mainstream-brand cars, but there are still a good number of them. This convertible appears to be a 1950. 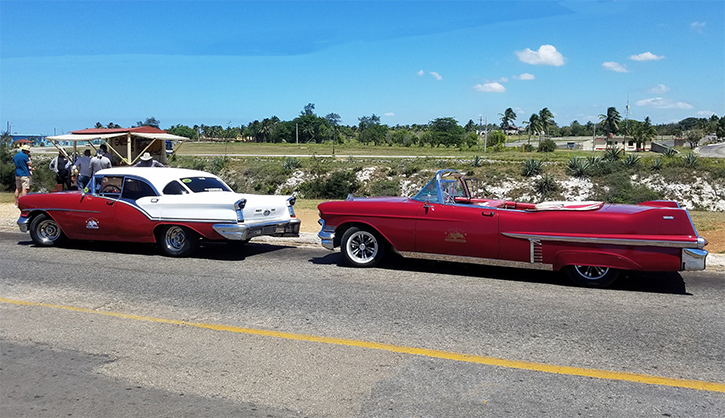 A 1957 Oldsmobile four-door sedan and a 1957 Cadillac convertible. 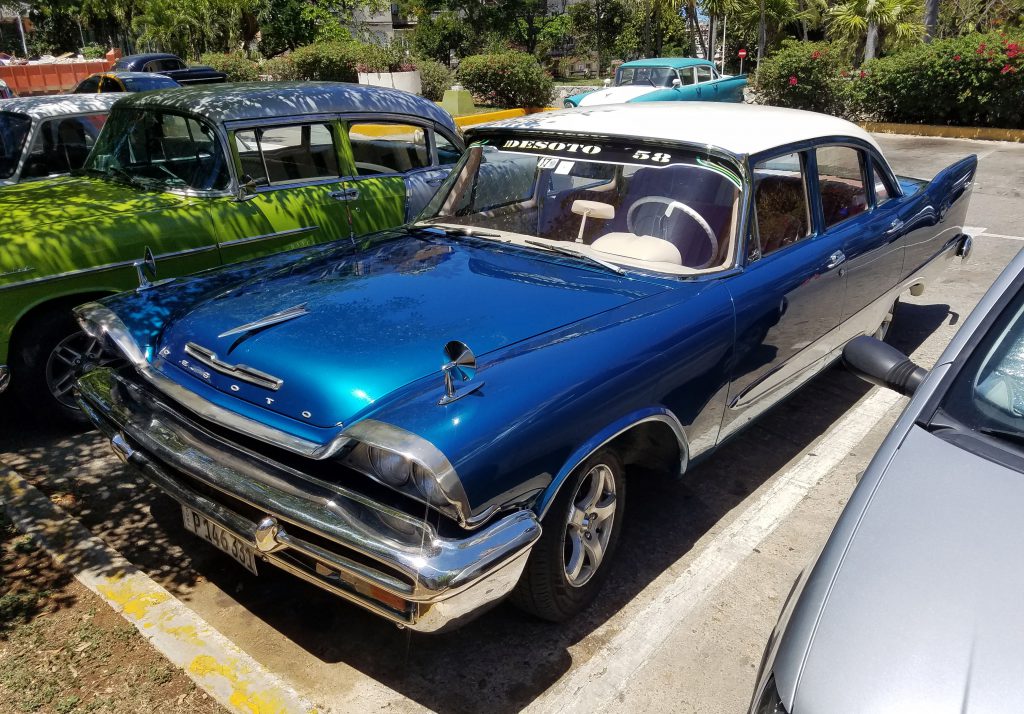 Chrysler products seemed to be less common than GM and Ford cars, but we still came across a few. Here’s a 1958 DeSoto, as its windshield-banner sticker proudly proclaims. 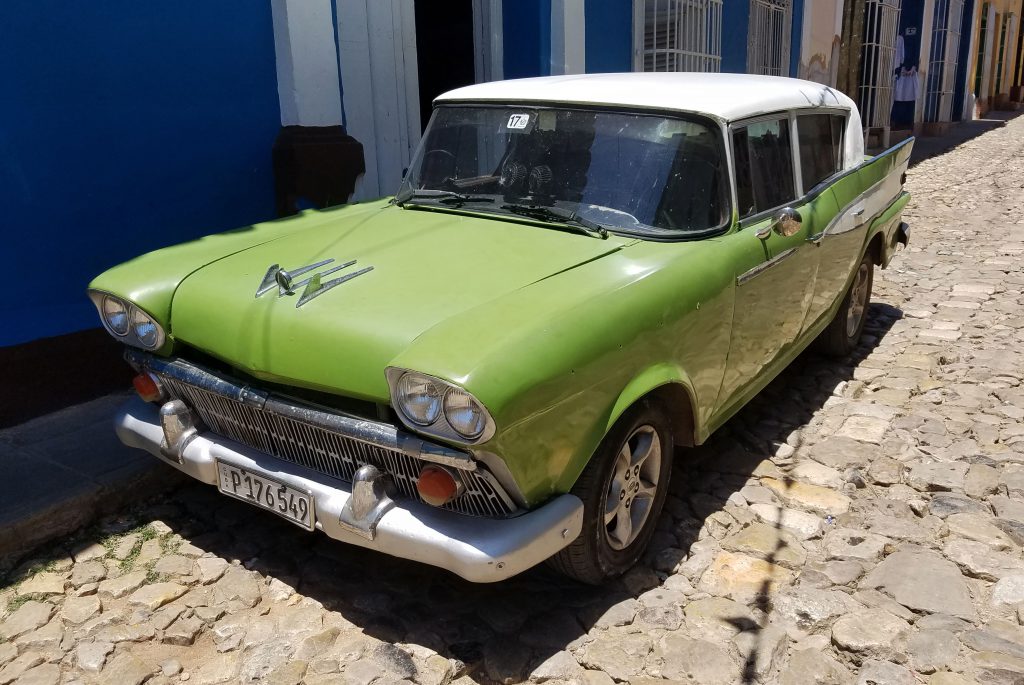 One of our last cab rides in Cuba was in this 1957 Ford four-door sedan. Its owner/driver told me that the engine was a 5-cylinder Mercedes-Benz diesel.