One of the advantages of having been a Consumer Guide test driver for 22 years is that several cars that were hopelessly out of reach when new are now within the realm of possibility . . . the financial realm, that is. Now, they’re cool used cars.

Furthermore, there’s the added benefit of having the test of time on your side. Some cars just don’t wear well. Others you’ll see still going strong at 200,000 miles, so if you find one with 120,000, there’s a good chance you can get a lot more use out of it. You might also get an idea of how much work they might require in order to do that.

One other stipulation for this list—which would otherwise be much longer—is that fuel economy counts. With gas “down” to about $3.90 a gallon at the time of this writing, cars that swill the stuff in sub-20-mpg gulps just didn’t make the cut.

First-generation Mazda Miata (1990-1998)
While a few of my other favorite sports cars remain in the “If you have to ask” price category, early Miatas can often be found quite cheap . . . especially during the winter months. A quick check of Craigslist revealed that a “driver” Miata could probably be had in the $2,500 range, maybe less. But besides the combined appeals of open-air motoring, fun-to-drive sportiness, and decent gas mileage, these cars usually have low mileage for their age, and they’ve acquired a reputation for being largely trouble-free and surprisingly stout.

First-generation Geo/Chevrolet Tracker (1990-1997)
Although I’m limiting my references to the convertible, I recall being quite fond of the 4-door wagon as well. However, you need to get one with a manual transmission, as the automatics were dreadfully slow—and not nearly as much fun to drive. The best choice for snow states would be the 4×4, but if you don’t need the traction, a rear-drive model is the epitome of simplicity—at least as far as vehicles of this vintage go. Even one in fairly decent shape might sell for less than $2,000. Top choices would be the ’96 and ’97, mostly because they are OBD II compatible, which allows for easier problem diagnosis. 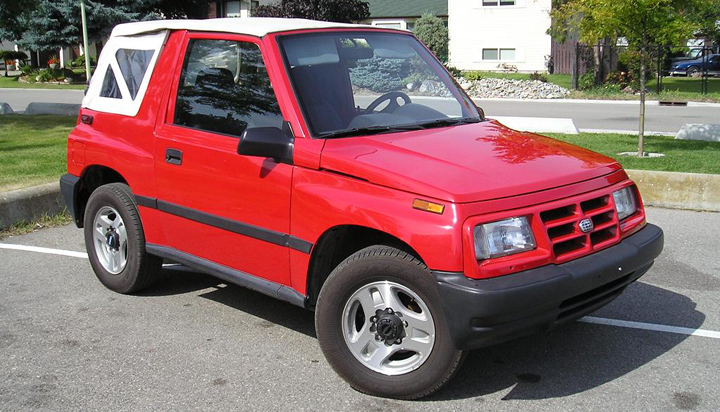 Speaking of problems, that’s something that puts one of my favorite sedans of all time on the fence. Well, that and the cost of repairing those problems. Audis of this vintage (and for some time after) were known for a myriad of electrical malfunctions, and, worse, they were usually under the dash—which makes them very hard (read “expensive”) to diagnose and fix. But I’ll always remember an enlightening drive in a pee-yellow stick-shift 1.8T Quattro that left me looking forward to the day I could afford to park one in my garage . . . though it would certainly be of a different color. Figure at least $3,000 for an early one, and you’ll probably want to set aside a fair amount per month for expected repairs.

Second-generation Toyota MR2 (1991-1995)
Why these “affordable Ferraris” weren’t more popular is beyond me. Perhaps it was because—for a Toyota—they weren’t all that affordable when new. Even today, good ones are on the pricey side for cars this old, and far too many suffered at the hands of the tuner crowd. But find a stock red one with manual transmission and sunroof (and if cost is less of an issue, the racy turbocharged engine), and I doubt you’d ever regret it.

First-generation Eagle Talon TSi AWD/Mitsubishi Eclipse GSX (1990-1994)
Granted, this would essentially be an automotive version of a search for the Holy Grail. It isn’t that you can’t find them; in fact, the want ads are littered with their butchered hulks needing whatever expensive driveline bit threw in the towel last. The trick is finding one that has somehow escaped a tuner’s sacrificial axe and nobly sparing it from a truly gruesome death. Note that the only versions of consequence are the turbocharged all-wheel-drive models, which came (properly) only with manual transmission. You could expand your search to the second-generation of 1995-1998, but those models frankly lost a bit of their former edge. These cars bring back warm memories of momentary turbo lag followed by a ferocious explosion of power; you actually wanted the light to turn yellow, just to give you an excuse. More cool used cars?