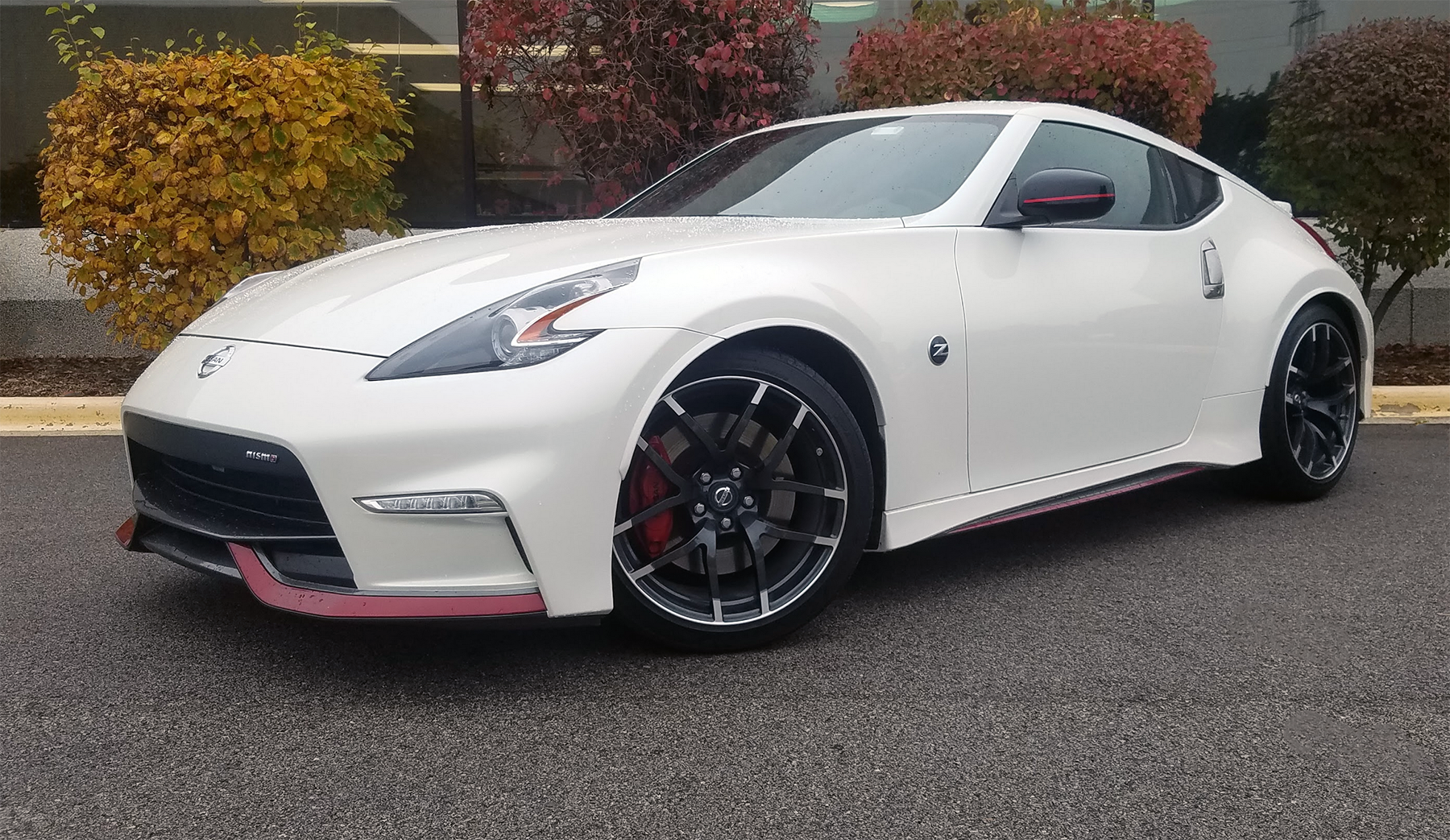 The good: Special trim features of NISMO model add a distinctive character inside and out 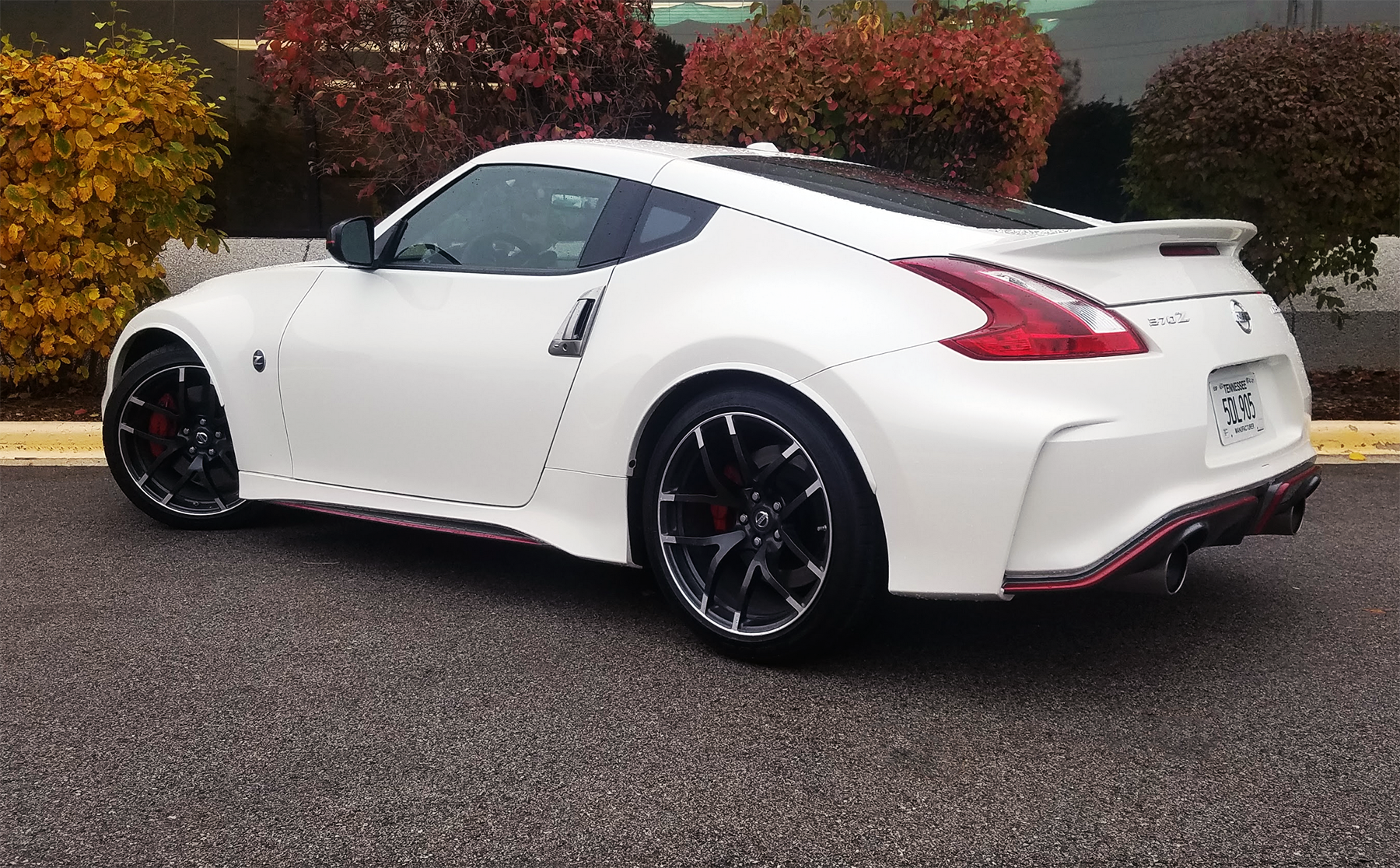 The NISMO model’s exclusive body-styling bits give it a swoopier, racier look than the rest of the 370Z lineup.

But that’s if you’re content to have the most basic of the four 2020 models on offer. Skip the steps and take the elevator to the penthouse of performance—and cost—and you’ll find yourself out at least $46,715 for a tuned and tricked-out 370Z NISMO like the one that Consumer Guide tested. 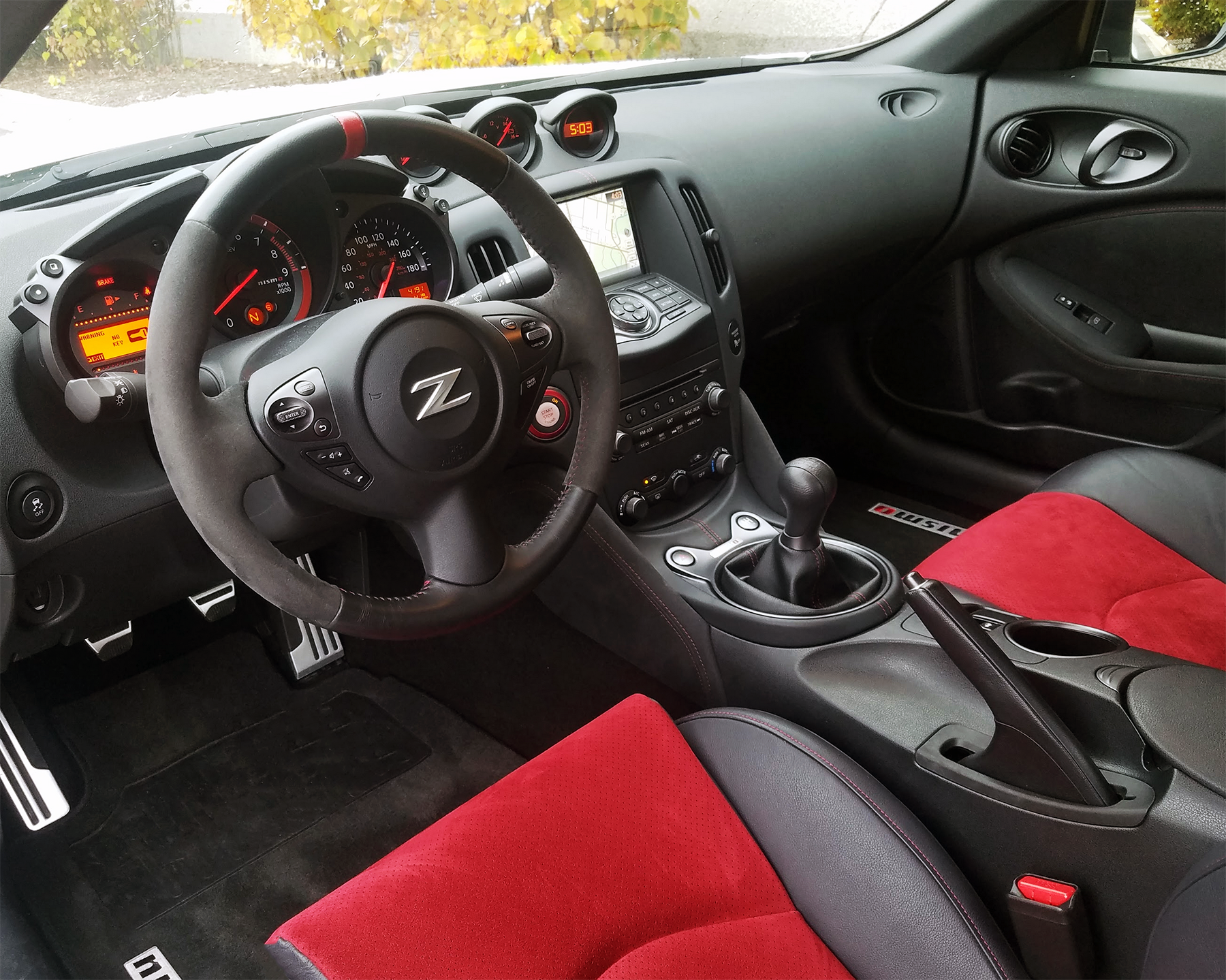 The 370Z’s cockpit is cozy but purposeful, and the NISMO model’s extra equipment–such as Recaro sport seats with red Alcantara inserts and Alcantara-trimmed steering wheel–add appeal.

In an age of multi-color driver information screens and fully digital gauge clusters, the 370Z’s instrument panel and its monotone amber lighting look especially outdated. That said, the basic gauge design, and the three auxiliary gauge pods perched atop the center of the dashboard, still have a cool high-performance sports-car look.

That, too, may seem like a bargain for less than $50,000, but it is a price that comes at a cost. The NISMO’s ride is exceptionally firm—heck, it’s hard. The independent suspension has stiffer springs all around to reduce suspension travel and restrict body roll. That may be just right for smoothly paved racetracks, but public streets and highways are rarely that smooth for long, and the average commute is sure to register its share of cabin-rocking hits. Larger stabilizer bars are another feature of this amped-up suspension. So are the 19-inch-diameter RAYS forged-alloy wheels specific to the car that are one inch wider in back than they are in the front, and shod in Dunlop SP Sport Maxx GT600 rubber. 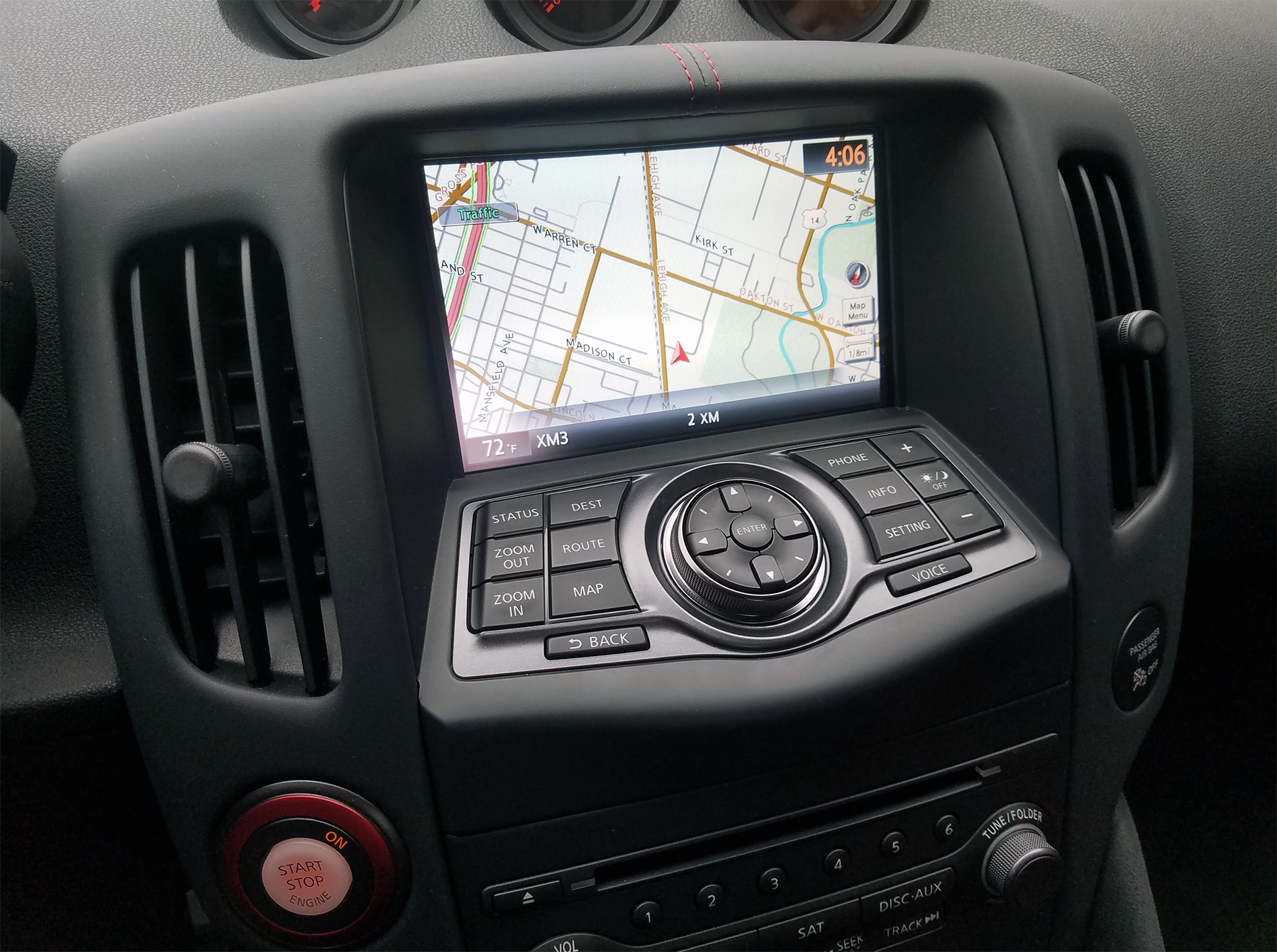 The 370Z’s available navigation system (standard on the NISMO) is an old design, and the buttons below the screen can be hard to read at a glance.

If the ride is a challenge to live with, the handling is a redeeming feature. Steering is very precise, and body motions are determinedly restrained. The NISMO is bestowed with body dampers mounted on the frame rail at the front and under the cargo area in back help squelch vibrations, and a reinforced 3-point shock-tower brace also plays a part in chassis rigidity. As on all but the base 370Z, a traction-optimizing viscous limited-slip differential is standard. The NISMO has the largest brakes ever offered on a 370Z: 14-inch 4-piston front discs and 13.8-inch 2-piston rear rotors. When it’s time to turn “go” to “whoa” they clamp down really well.

The NISMO version of the 3.7-liter V6 steps up to 350 horsepower at 7400 rpm and 276 lb-ft of torque at 5200 revs. That’s plenty of power to get it to take off like a shot, abetted by a racy-sounding free-flow dual exhaust. Nissan says the H-pipe-configured exhaust reduces back pressure by up to 30 percent and enhances high-end performance. While the report is genuinely muscular, it is persistently loud in highway cruising, which might get tiring after a bit. Unique front and rear fasciae, side sills, and rear spoiler improve aerodynamics for high-speed running. 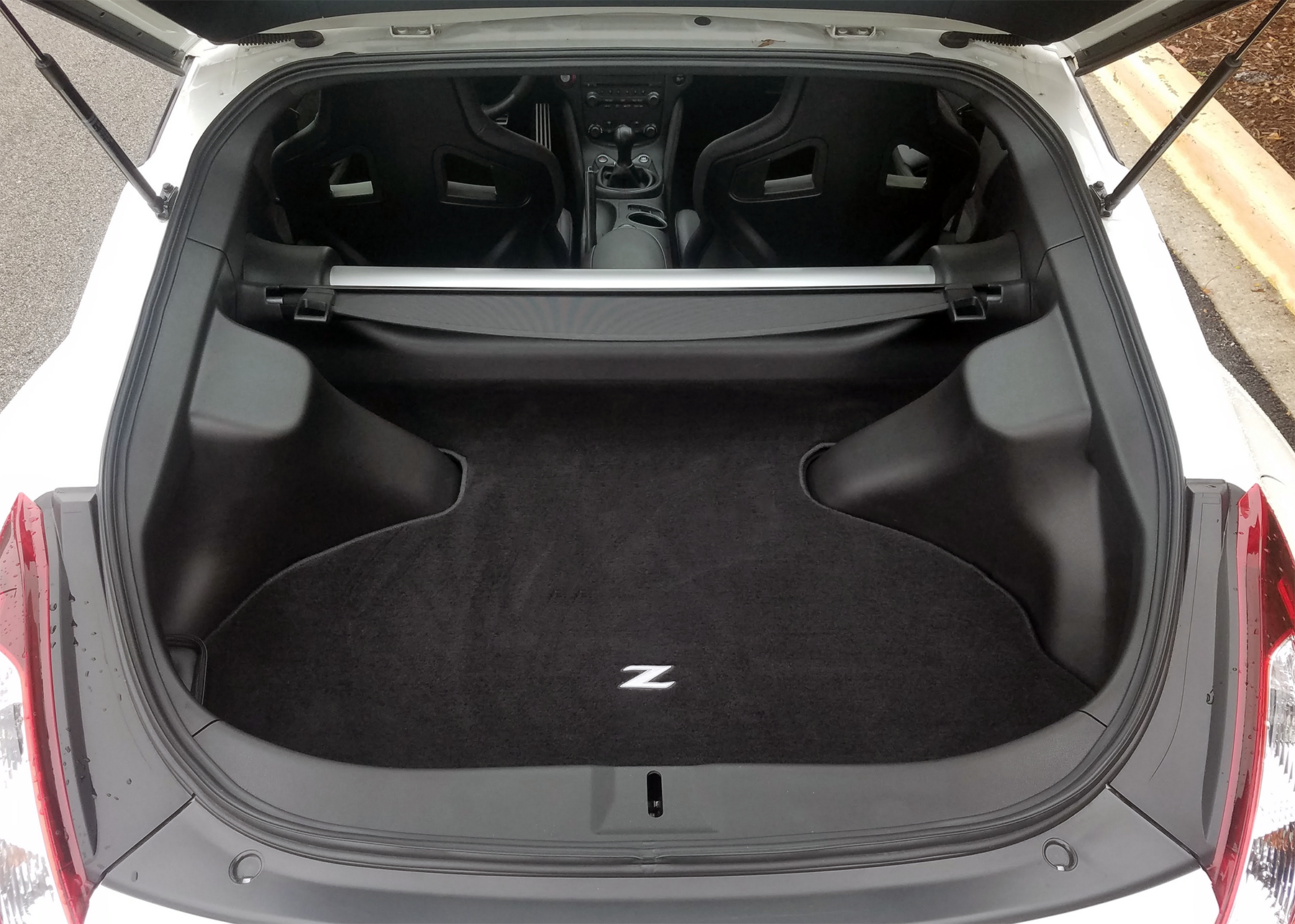 Cargo hauling isn’t a 370Z strong point. Though the hatchback provides a generous opening, the cargo floor is very shallow, and the rear suspension components and a chassis-stiffening crossbar intrude on the available space.

Transmission choices come down to a 7-speed automatic with manual-shift mode and downshift rev matching (a $1400 option) or the 6-speed manual that was in the test car. We’d like to be able to say nice things about the 6-speed, but it won’t let us. The short-throw shifter was stiff and notchy through the gates, which made it tough to hit some changes just right. The NISMO’s clutch felt heavier than the one CGers experienced in a Sport Fiftieth Anniversary job, but it wasn’t terribly tricky to modulate or wearying to use.

The EPA estimates that the 350-horse 3.7 with 6-speed should be good for 17 mpg in city driving, 26 mpg out on the highway, and 20 mpg in combined use. When this reviewer topped off after a 64-mile stint with just 18 percent city-type operation, he saw 19.2 mpg.

Rooted as it is in 2009 (with only a 2013 freshening), the 370Z isn’t the most au courant thing on four wheels. You won’t find any of the now-common high-tech safety aids like forward-collision alert and mitigation, blind-spot monitor, or lane-departure warning. All your smartphone is asked to do is link up with the Bluetooth; it won’t be Apple CarPlaying or Android Autoing. The steering column tilts (in unison with the instrument cluster) but doesn’t telescope. Driving gauges and convenience controls are best described as nostalgic, especially in the lower-line base and Sport models. The navigation system standard in Sport Touring and NISMO models comes with a 7-inch touchscreen, so the dash in these models looks perhaps just six years old and not the full 11. The nav controls are a familiar Nissan unit with function buttons arrayed around a central dial, but they rest facing up at the foot of the recessed touchscreen and aren’t easy to read at a glance.

The NISMO’s 3.7-liter V6 gets a horsepower boost over the rest of the 370Z lineup–350 horsepower instead of 332. RAYS-brand 19-inch forged-alloy wheels on Dunlop performance tires are standard equipment.

A silver lining is that 370Z controls remain refreshingly simple to operate in an era of rampant infotainment overload. You can input radio presets on the screen, but physical tuning buttons make set-up a snap. The single-zone automatic climate system is managed by convenient dials for fan speed and temperature. The NISMO does get a specific centrally located tachometer distinguished by red graphics.

Seats are well-bolstered Recaro buckets with red Alcantara inserts to help keep occupants secured when the going really gets, well, going. Adjustment is manual—8-way for the driver and 4-way for the passenger. Lots of padded or Alcantara-covered surfaces are found on the doors, steering wheel, and padding on the sides of the console. Red contrast stitching is another NISMO signature touch. The seating position is low, so entry and exit will be a challenge for some, and taller drivers may long for more headroom. Driver vision isn’t the best.

Cabin storage space is limited. In fact, the nav unit occupies space that is a covered storage bin in base and Sport versions. Luggage capacity is restricted as well. The space beneath the standard cargo cover is shallow, and there’s no underfloor room. Finally, liftover is high.

The 370Z NISMO is too track-focused to be an enjoyable daily driver. But there are “Z cars” that can be—and for less money.

Its basic design is one of the oldest on the market today, and the compromises inherent in a low-slung, tautly suspended sports car are all present and accounted for, but the 2020 Nissan 370Z NISMO nevertheless offers some impressive performance numbers at a price that tops out at less than $50K. If you want a more up-to-date Z car, sit tight… Nissan’s new 400Z should be debuting in the near future. 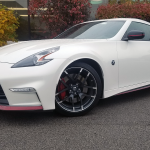 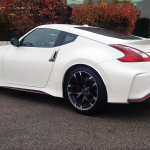 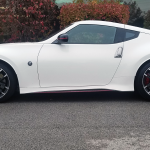 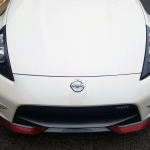 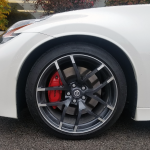 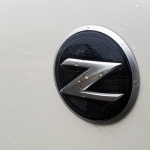 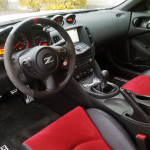 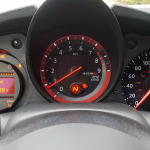 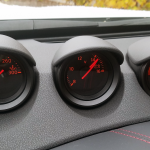 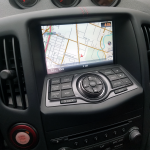 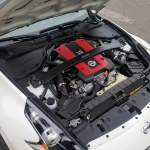 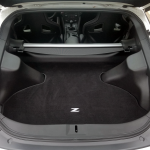