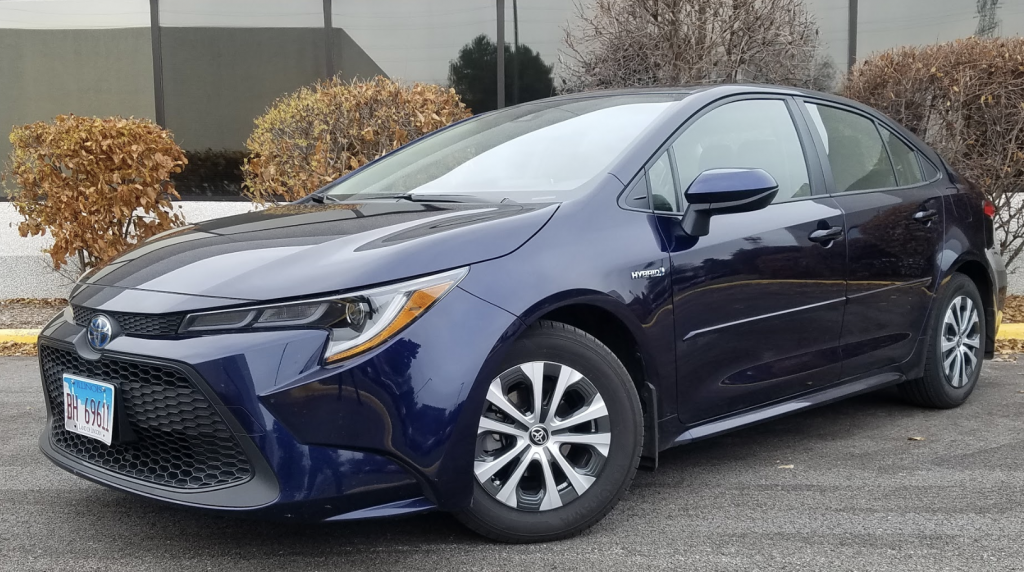 The not so good: Interior ambiance, missing some upscale features

As we reviewed a very similar 2020 Toyota Corolla Hybrid last summer, we invite you to read that Test Drive report for more details. Here we’ll touch on some additional observations gleaned from a recent winter-weather test. 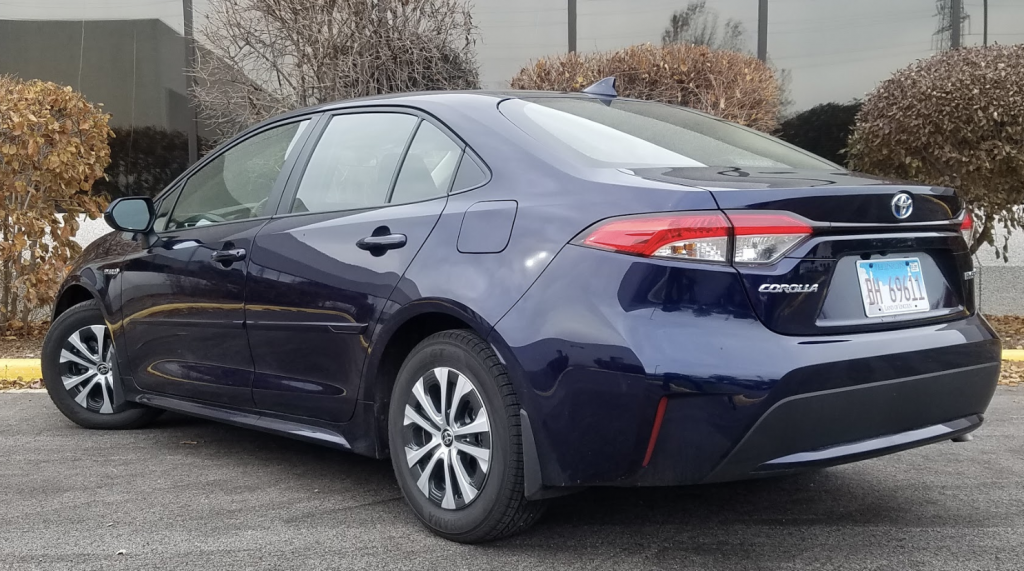 If you think of the Corolla Hybrid as a Prius with a trunk, you wouldn’t be far off. The powertrain is virtually the same, though the body and interior are all Corolla.

It’s long been known that cold weather adversely affects fuel economy. In both our summer and winter evaluations, about 35 percent of our test miles consisted of city driving, so this makes for a fairly accurate comparison. The biggest difference was that our winter test included four, full-throttle 0-60 runs, though that shouldn’t make much of a dent considering we covered nearly 570 miles in total.

During our summer test, we averaged a stellar 53.9 mpg; in winter, it dropped to a still-impressive 49.9 mpg – which is about what we’d expect due to the colder weather.

As the Corolla Hybrid carries a powertrain virtually identical to that of the famed Toyota Prius – a 1.8-liter 4-cylinder engine paired with two electric motor/generators fed by a nickel-metal-hydride battery for a combined 121 horsepower – those lofty figures aren’t really surprising … except that the Prius is a purpose-built hybrid with slick aerodynamics (not that the Corolla is a brick in this regard). Yet doing a direct fuel-economy comparison is a little tricky. 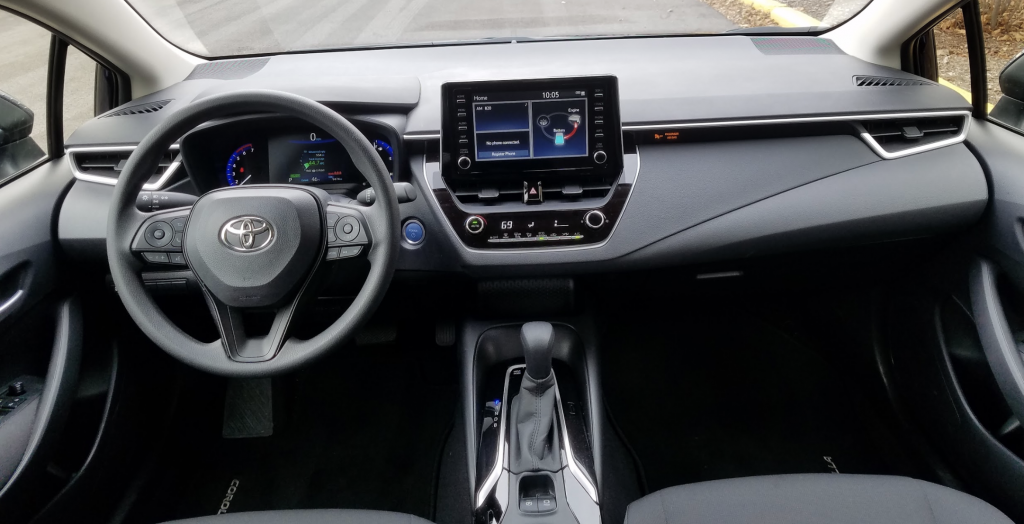 There aren’t many high-end materials inside, but the look is nice enough. Infotainment and climate controls are refreshingly easy to use, and visibility — especially to the front — is quite good.

Not only do temperature and city/highway driving ratios come into play, but so does the Prius model being considered. The Prius now comes with four different powertrains: “regular,” Eco, Plug-in Prime, and – new for 2019 – AWD-e with all-wheel drive in place of front-wheel drive. With those cars, we’ve averaged, respectively, 52.6, 68.2, 88.7 (some miles driven on just electric power), and 51.1 mpg in our tests. As it’s the “regular” Prius that’s closest in powertrain configuration, the Corolla’s numbers are very close, and in fact, the EPA rates both the Prius and Corolla Hybrid at the same 52 mpg combined.

Where the Prius has an advantage is in its greater cargo room and versatility thanks to its hatchback body style. But where the Corolla has an edge is in price.

Yet it’s not a really big edge. Our test Corolla Hybrid LE listed for $24,880 including the $930 destination charge. By contrast, the least-expensive Prius starts at $25,280 – so just $400 more. But some folks may prefer the security of a trunk or maybe the Corolla’s sedan styling. Either way, it’s pretty much a toss-up.

It’s a little thing, perhaps, but we liked that the door handle was toward the front of the door, where it’s easy to reach if the door is opened wide. Rear-seat room is adequate for adults, though legroom gets tight if the seat ahead is pushed far back. The trunk is reasonably sized and wide at the rear, but sickle-shaped hinges dip into the load area, and folded rear seat backs rest five inches above the level of the trunk floor.

Our Corolla Hybrid averaged about 9.88 seconds in the 0-60 sprint, a decent but hardly great showing. Yet it seemed quicker in normal driving, as it managed a good full-throttle jump off the line and exhibited fine response when the throttle was pressed at speed, making for satisfying around-town performance.

Although electric vehicles tend to get all the hype nowadays, and plug-in hybrids are a great stepping stone in that direction (with the ability to run on either electricity or gas), regular hybrids are really tough to beat from a value standpoint – especially when gas prices are low. Others hybrids in the compact class include the Honda Insight (also a sedan) and Hyundai Ioniq (a hatchback), the latter also offered in plug-in hybrid and pure electric form.

If it’s a fuel-sipping sedan you want, the Toyota Corolla Hybrid is a great choice. It has a lot of pluses with very few flaws, giving up little for the stellar fuel economy it delivers.

Even in this age of low gas prices, it’s appealing to have a car that gets great fuel economy, our costs coming to just a little more than 5 cents/mile. And that’s in a nice performing, decently equipped car that lists for about $24,000.