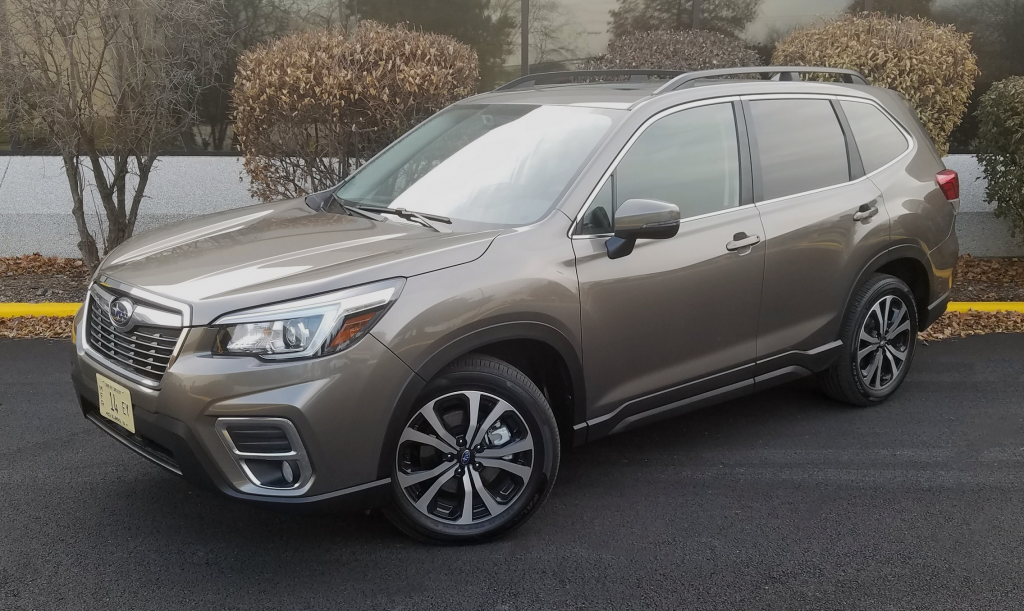 The good: Good mix of passenger-car and SUV attributes

The not so good: Disappointing fuel economy compared to EPA estimates

The Subaru Forester, which gets a full redesign for 2019, might be the quintessential compact-crossover sport-utility. It’s got clear-cut design and technology features for better-than-average potential off the pavement or in bad weather, while remaining convenient, comfortable, and easy to drive the rest of the time. It’s not too much of a car or too much of a truck. 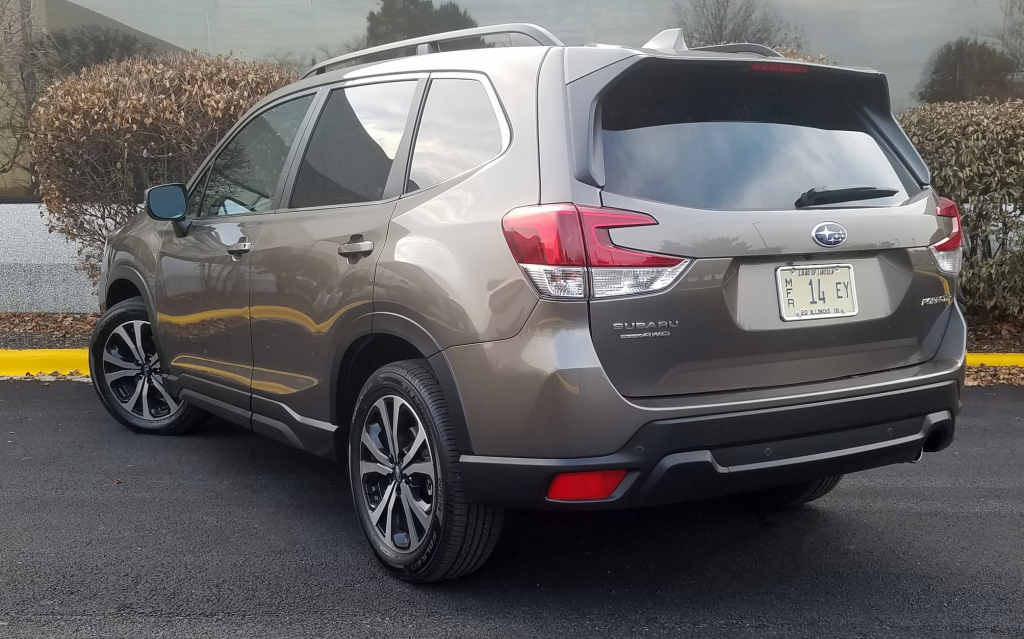 Utilizing Subaru’s Global Platform architecture that has been used for other product lines since 2017, the fifth-generation Forester is a bit bigger inside, which is good news if you’re people or cargo. There’s increased power from the carried-over standard engine, yet with the promise of a little better fuel economy. Subaru has also built up the capability of its X-Mode terrain-management system.

Consumer Guide editors sampled the new Forester Limited, which stands second from the top of five trim levels. Its $31,770 starting tab (including delivery) was pushed higher by an option package that set the total at $33,465.

In Limited trim, the Forester’s cabin has a sturdy feel with a number of classy touches that provide an upscale ambiance. The rear seat can accommodate average-sized adults in comfort.

The 2019 Forester’s rear cargo opening is 5.3 inches wider than the previous-gen model; total cargo volume is 35.4 cubic feet behind the rear seats, and 76.1 cubic feet with the rear seats folded.

Infotainment is presented through a voice-activated Subaru Starlink system with an 8-inch touchscreen, AM/FM/CD player, satellite and HD radio, new Apple CarPlay/Android Auto smartphone integration, a raft of apps, and Bluetooth audio streaming and hands-free phone/ text-messaging connectivity. However, the option package added to the test car upped the ante with improved navigation, satellite-radio traffic information, near-field communication, and Harman Kardon premium audio. A Wi-Fi hotspot is a new feature in Foresters. For the sake of safety, there is the EyeSight suite of forward-collision warning and mitigation, lane-departure warning, lane-keep assist, adaptive cruise control, and Lead-Vehicle Start Alert (to remind you if the vehicle in front of you in traffic moves and you don’t). Blind-spot and rear-cross-traffic alerts are standard, and the option package adds reverse automatic braking. Trailer Stability Assist, another new feature, can brake individual wheels to stabilize both vehicle and trailer. 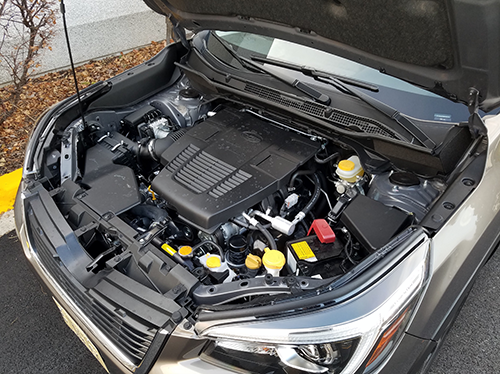 The Forester’s 2.5-liter horizontally opposed 4-cylinder gets a number of revisions for 2019, including a 12-horsepower bump for a total of 182 hp.

Subaru launches the new-generation Forester with a revised 2.5-liter “flat four” with horizontally opposed cylinders. Changes include a switch to direct injection, a higher compression ratio, and active control of the exhaust valves. The engine is now rated at 182 horsepower—12 more than previously—and 176 lb-ft of torque. It’s enough for perky around-town driving and quiet, competent highway running. Plus, the version of “Subaru Intelligent Drive” that’s standard in the Limited lets drivers choose from two powertrain-and-throttle-control modes, one of which spices things up somewhat. Power runs through a continuously variable transmission that is not quite the performance-neutering killjoy that some such devices can be.

The EPA rates the ’19 Forester at 26 mpg in the city, 33 on the highway, and 29 combined—which represents a pick-up of one mpg in highway and combined estimates. This driver averaged 25.4 mpg after 196 miles with 45 percent city-style operation; a later run—199 miles, 60 percent city—returned 23.5 mpg. A gas-saving automatic stop/start function is new to the Forester, but engagement is noisy, rough, and a tad slow. Drivers willing to trade nth-degree fuel economy for a little peace and quiet will probably switch it off.

Perhaps even more enjoyable is the fine balance of ride and handling. Urban street cracks and expressway pavement joints had a tough time rattling the structure or defeating the damping in the fully independent suspension. There’s a little bit of lean in cornering. Steering is fairly direct, keeping up well with driver inputs even if it could use a little more feedback. Every model above the base job comes with console-set X-Mode, now with Snow/Dirt and Deep Snow/Mud settings that adjust powertrain performance and vehicle dynamics to improve traction in these conditions. This tester selected Snow/Dirt when getting away from home on a morning when his street was covered in thick, wet snow and the Forester didn’t seem to miss a beat. X-Mode also incorporates hill-descent control.

Wheelbase grows by 1.2 inches for 2019, and the rear seat gets the full benefit of that stretch. Legroom is very good in either row. The same can be said for headroom. Front and rear outboard seats are comfortable, and three adults could snugly fit across the second row. Even with 8.7 inches of ground clearance, entry and exit is easy. Glass area is expansive, and windshield and door pillars are fairly narrow, so driver vision is excellent except to the extreme rear corners, where the bodywork rises and cuts into the view.

Soft surfaces are easy to find around the Forester Limited cabin, but the overall effect stops short of luxurious. Speedometer, tachometer, and driver-information displays are bright and legible. The audio system is easy to set up and use. The climate controls consist of handy dials to set temperature and fan speed, with just four buttons for other functions. 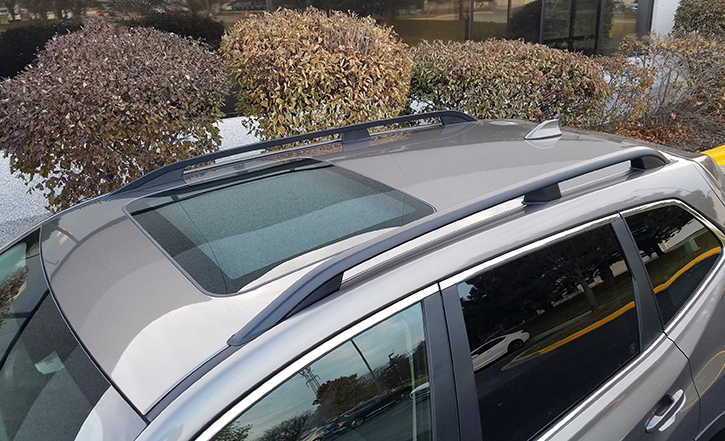 Roof rails and a generously sized (though not quite panoramic) sunroof are standard equipment on the Limited.

For interior storage there’s an acceptably sized glove box and a nicely shaped covered console box. The console cubby comes with a small-item organizer, but it has to be removed to expose the main storage space. At the front of the console is an open space with device inputs. Big pockets rest in the front door panels. Double-row pouches are attached to the backs of the front seats. Open cup holders reside in the console and pull-down rear armrest, and all four doors have spaces for bottles.

Cargo loads on a spacious flat floor through an opening that is 5.3 inches wider than in the previous Forester. Overall cargo space is greater, too. When the 60/40-split rear seats are folded, the ’19 model holds 76.1 cubic feet, a gain of 1.4 cubic feet. The lowered seats pitch up a little from the cargo floor, but a cover panel provides an uninterrupted surface.

The previous-generation Forester ended its run as a healthy seller. Its successor seems improvement enough to maintain that momentum.

The redesigned 2019 Subaru Forester gains several desirable technology and safety features along with improvements in interior space, while maintaining the “just right” mix of car and SUV traits that have made it a favorite with active families.