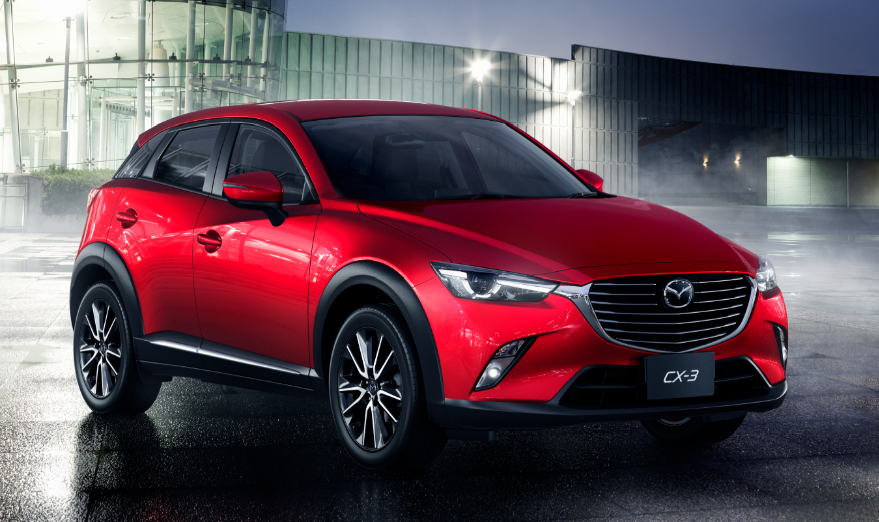 Mazda’s new CX-3 subcompact SUV goes on sale in early August at a well-equipped starting price of less than $21,000. Shown is the top-line Grand Touring model (starting at about $26,000), which will most likely be the one shown in commercials, as it sports giant 18-inch wheels. All-wheel drive is a $1250 option on all models.

The “Subcompact SUV” class initiated by the Mini Countryman, Mitsubishi Outlander Sport, and Nissan Juke in 2011 (there were so few members that it wasn’t even considered a separate class then) and was joined in 2013 by the Buick Encore, exploded recently as five new entries were added just this year: the Chevrolet Trax, Fiat 500X, Honda HR-V, Jeep Renegade, and … last but not least … the Mazda CX-3. That makes nine in total, easily enough to qualify as its own segment.

In general, these vehicles are about 10 inches shorter and a couple thousand dollars cheaper than their respective “Compact SUV” running mates. As such, they’re favored by young and old alike for their easy maneuverability, good fuel economy, and comparatively low prices. And with at least some of them, they’re also the least-expensive way to get all-wheel drive and modern high-tech safety features that haven’t yet made their way down to lower-priced cars.

In all those regards, the Mazda CX-3 is a strong contender. But like any other vehicle, it has to make some trade-offs; you can’t have both huge amounts of power and great fuel economy, for example, as the two just don’t go together.

Although we’re sometimes inclined to forget, “SUV” stands for “Sport-Utility Vehicle.” (Though many of the smaller ones are now being called “Crossovers” or “Crossover Utility Vehicles.”) And often leaning toward one side of the separating hyphen means sacrificing something from the other side.

In the Subcompact SUV class, the CX-3 joins the Mini Countryman, Mitsubishi Outlander Sport, and Nissan Juke on the “Sport” side of the divide. Others, such as the Chevrolet Trax and Jeep Renegade, favor the Utility side. Buick’s Encore takes an unusual luxury stance, the Honda HR-V aims for middle ground, and the Fiat 500X stands as somewhat of a fashion statement. 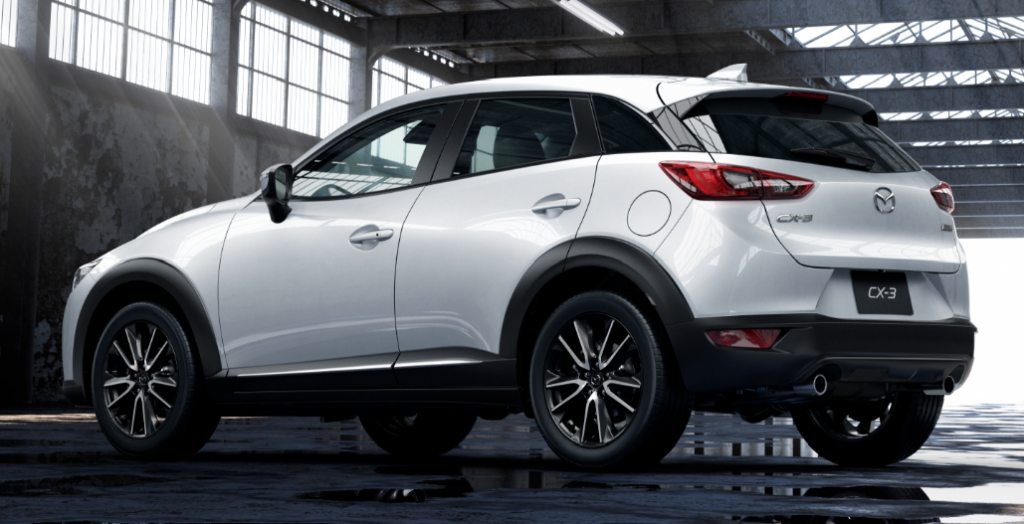 CX-3’s “cab rearward” design and short overhangs result in a sporty appearance — and limited passenger and cargo room. All models come with a 146-horsepower 2.0-liter engine and 6-speed automatic transmission, a combination that puts it at or near top-of-the-class in EPA ratings.

And the CX-3 looks the sporting part. It has an exceptionally long hood with short overhangs along with swooping side sculpturing that would do an exotic proud. And the top Grand Touring model rolls on 18-inch wheels (vs. 16s on other models), the biggest offered in the class. But the long hood, especially, takes its toll on overall space, as it effectively pushes the front of the cabin back.

Although plenty of adult headroom and legroom can be summoned up front (and there’s even good knee clearance to the center console), maxing out the seat travel gobbles up rear legroom to the point that small adults and even most kids won’t fit. However, if front-seaters are 6’ or less, an average-size adult will find enough – though hardly ample – room behind.

Cargo room also suffers a bit. The hatch opening isn’t very large and the area just inside isn’t very wide, though there’s an impressive amount of storage space under the floor. Yet with the rear seat backs up, there’s just 12.4 cubic feet of space behind them; folding the seat backs – which lay flat and level with the cargo floor – ups that to 44.5. By comparison, the figures for the competing Chevrolet Trax and Fiat 500X are about 18.5 and 49 cubic feet, and those for the Honda HR-V (the roomiest in the class) are about 24 and 58 cubic feet.

But that’s about all there is to complain about.

Up top we mentioned the necessary trade-off between horsepower and fuel economy, but the CX-3 offers a combination of the two that strikes an impressively good balance. Its 2.0-liter engine – bigger than most in the class – puts out only 146 horsepower, but it still feels reasonably strong in a vehicle that’s among the lightest in the segment. In combination with the standard 6-speed automatic, it provides a good full-throttle jump off the line, and the transmission kicks down quickly for more passing power. And in terms of fuel economy, CX-3 is among the best in class with EPA ratings of 29 City/35 Highway with FWD, 27/32 with AWD.

We tested both a mid-line Touring with 16-inch wheels and a top-line Grand Touring with 18s. (There were no base Sport models at the preview). In many cases, the lower-profile tires used on larger-diameter wheels inflict a penalty on ride quality due to their shorter sidewalls (which are less able to absorb small bumps), but we didn’t notice a lot of difference in this case. It’s important to note, however, that the preview was held in Southern California, where frost heaves and potholes are virtually unknown qualities. (Not so at our Chicagoland headquarters, where we’ll hopefully get to test other CX-3s soon – and record actual fuel economy.)

One thing California does have is lots of curvy roads, and those made up a sizeable portion of the driving route. Both CX-3s were AWD versions and both handled these with confident, balanced aplomb, with the Grand Touring perhaps feeling a bit more responsive to steering inputs. (Our impressions of handling might have been even better had we not spent the previous day behind the wheel of the new Miata – a sports car in the true sense of the term – which likely jaded our view a bit.)

The tri-tone cabin of the Grand Touring is both colorful and stately. Back out the white and you have a Touring; take out the red and you have the somewhat monochromatic Sport.

CX3’s interior furnishing and layout are impressive as well. While the Sport model’s dark, monochromatic color scheme seemed a bit drab in the photos we were shown, the Touring brightens things up a bit with maroon-colored armrests and some nicer trim. Grand Touring goes even further with ritzy three-toning that includes lots of contrasting white, the overall effect being both classy and “techy.” The dashtop isn’t padded but many normal “touch points” are, including a swatch across the dash face along with the door sides (but not the tops) and both the door and center armrests.

Nearly all Mazdas now use a similar infotainment-system layout that features a touchscreen protruding from the top of the dash along with console-mounted control knobs. The screen may look odd to some – as though it was added after the fact (Mercedes is doing the same thing, by the way) – but it serves to put its information closer to the driver’s line of sight. Some people may not like the console-mounted control knobs, either, but many functions can be duplicated on the touchscreen and also via steering-wheel controls. Nevertheless, some adjustments require more steps than would be optimal, but that can be said for many such systems today. By contrast, the climate system is adjusted with three rotary knobs, a classic and supremely easy-to-use layout.

Visibility is quite good all around thanks to modestly thick roof pillars, though the view straight back and to the rear corners is restricted somewhat by a rather high beltline. Helping is a standard rearview camera that shows a fairly wide (though not quite 180-degree) view.

When it goes on sale in early August, front-wheel-drive versions of the CX-3 will start at $20,840 (including destination) for the Sport, running to just under $26,000 for the Grand Touring. On all models, AWD (which Mazda calls “Predictive iACTIV all-wheel drive”) is a very reasonable $1250 option. 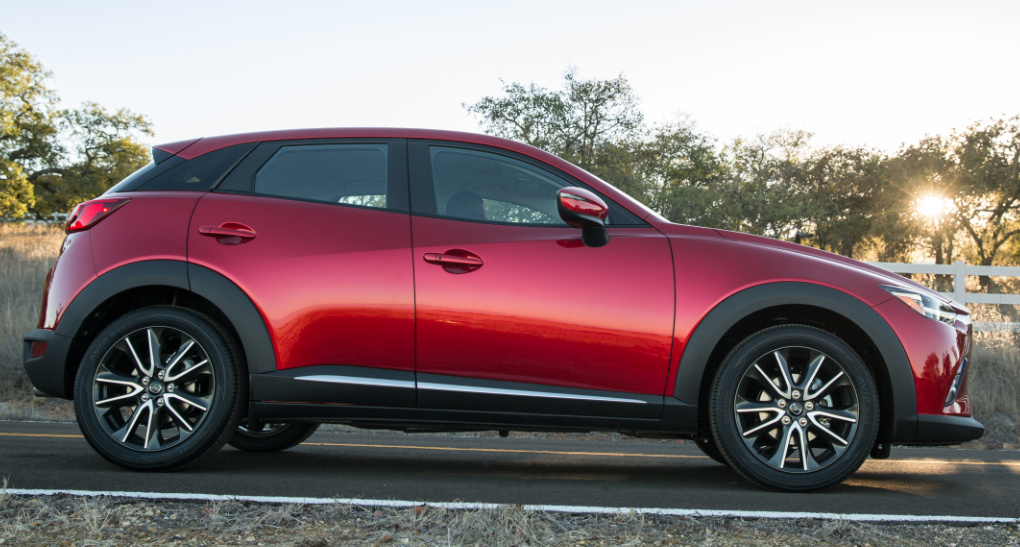 This particularly dramatic view shows the long nose, sweeping creases, short overhangs, low greenhouse, and “floating roof” that give the CX-3 its sporting look. Would it be cad to call it the “Jimmie Durante of SUVs”?

Particularly if your interests in subcompact sport-utilities favor the “sport” side of the segment, Mazda’s new CX-3 strikes us as a credible contender with great fuel economy, lots of available features, and a strong value equation. It may be the last of the newbies to arrive, but it seems it was well worth the wait.