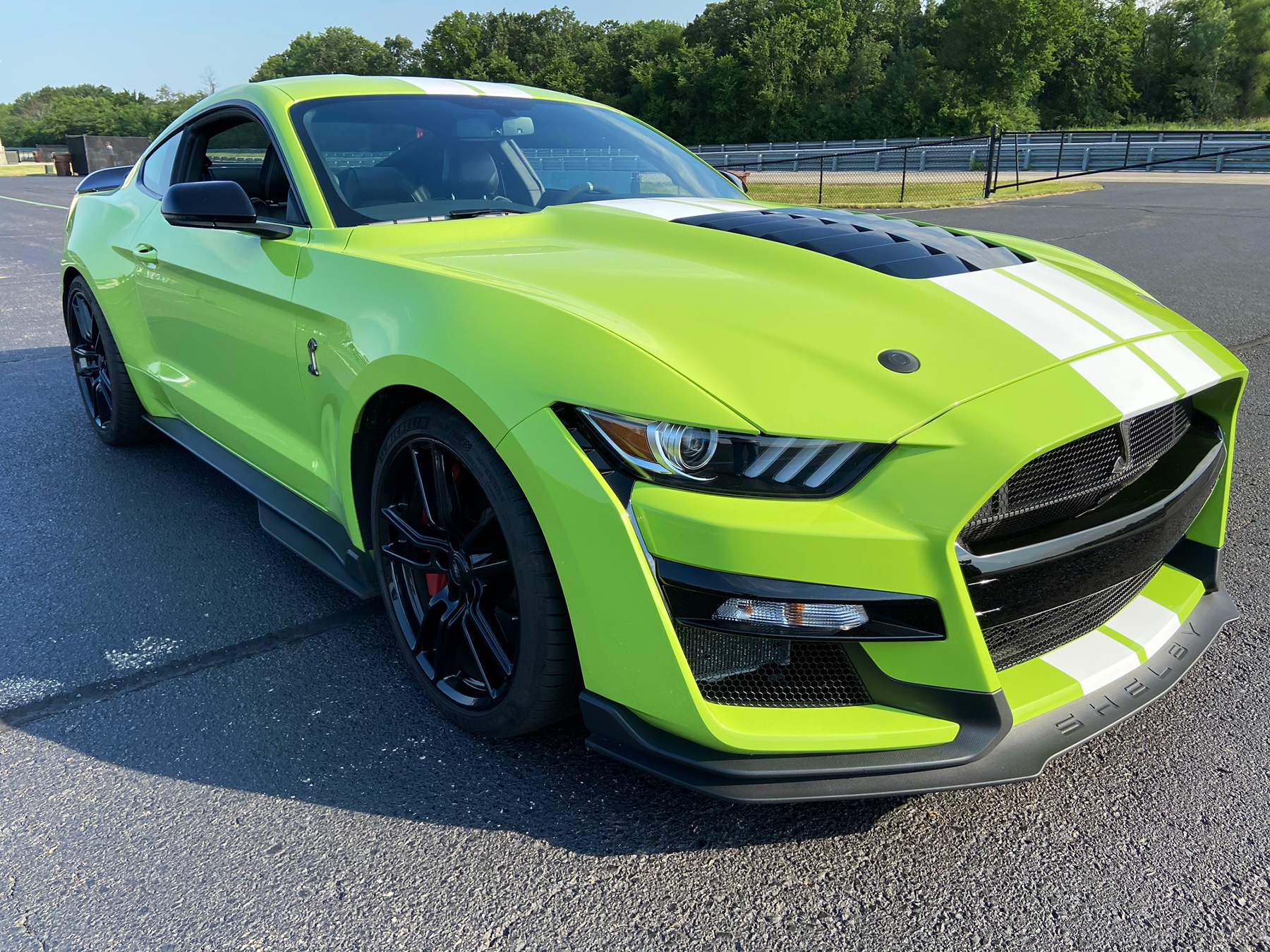 The 2020 Ford Mustang Shelby GT500 goes sniffing for challenges on track or strip through a big grille and ducts that cool the engine, transmission, supercharger, and brakes. Shown here is a GT500 set up for drag racing with downforce-enhancing front-splitter wickers and rear-spoiler “Gurney flap” removed. Special tools for these parts are included with the car; so are instructions for optimal front camber settings.

If Ford Mustang and Shelby marketing chief Jim Owens is happy about anything, it’s this: “There is no better time to be a performance-car enthusiast than right now,” he says. No doubt he feels that way because for 2020 his stable of steeds has a new leader, the 760-horsepower Shelby GT500. It is, Owens notes, the fastest street-legal Mustang ever, either in a straight line or lapping a road course.

This first GT500 since 2014 starts at $73,995, including Gas Guzzler Tax and delivery charge. Designed to handle as well as accelerate, we’ll refer you to Consumer Guide’s First Spin report for an unbridled account of this powerhouse pony. When Ford brought the GT500 North American Track Tour to Autobahn Country Club in Joliet, Illinois, on a hot early July day, CG came out to soak up the car’s magnificent sound and some of its fury (per program limitations). It did, however, allow us to take a closer look at some of the GT500’s high-performance features that form the basis of this report. 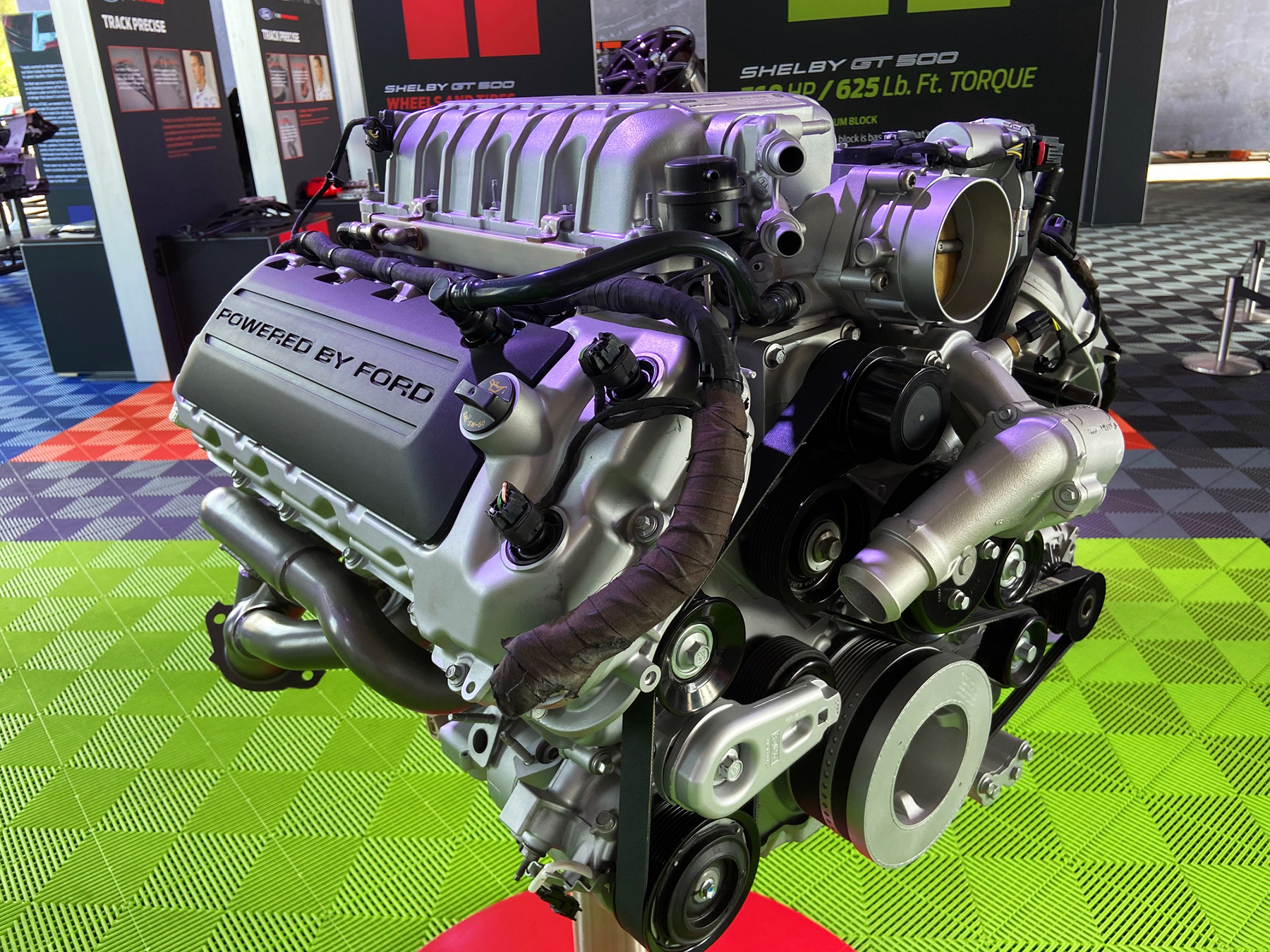 A 5.2-liter supercharged V8 with twin overhead camshafts produces 760 horsepower at 7300 rpm and 625 lb-ft of torque at 5000 rpm. It’s an engine that will pull like an overzealous dentist to the 7500-rev redline and deliver a claimed top speed of 180 mph. Where the naturally aspirated 5.2 in the 526-horse Shelby GT350 uses a flat-plane crankshaft, the GT500 engine employs a cross-plane crank that reduces vibration. 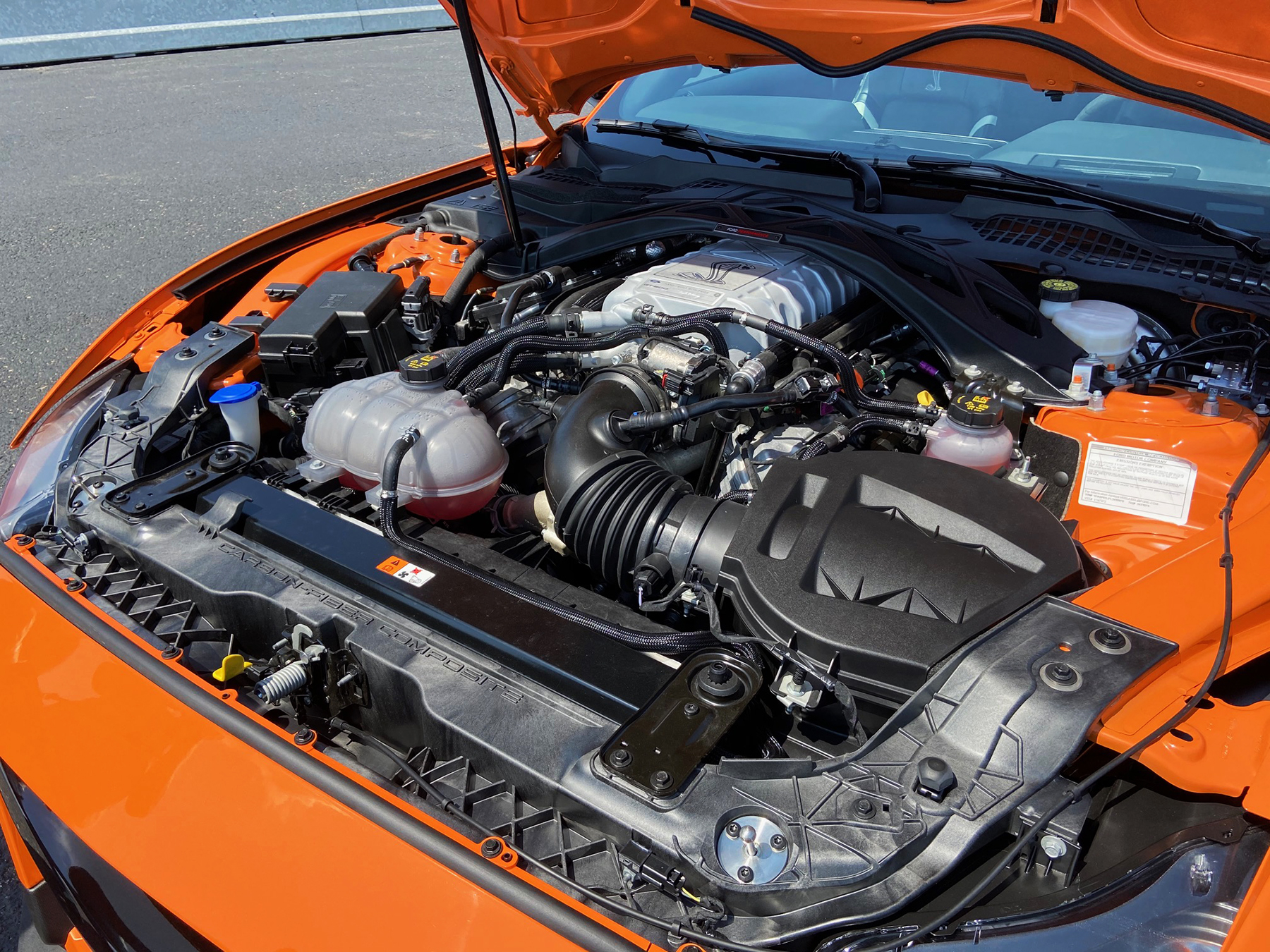 The 5.2-liter engine at home under the hood of a Shelby GT500. Ford inverted the 2.65-liter Eaton supercharger (the blower has more capacity than the EcoBoost four in base Mustangs has cylinder displacement), positioning its heavier parts down between the cylinder heads, thereby lowering the car’s center of gravity a little. Spanning the powerplant is a magnesium shock-tower brace light enough to be carried in one hand but strong enough to maintain vehicle stability in hard cornering during track driving. 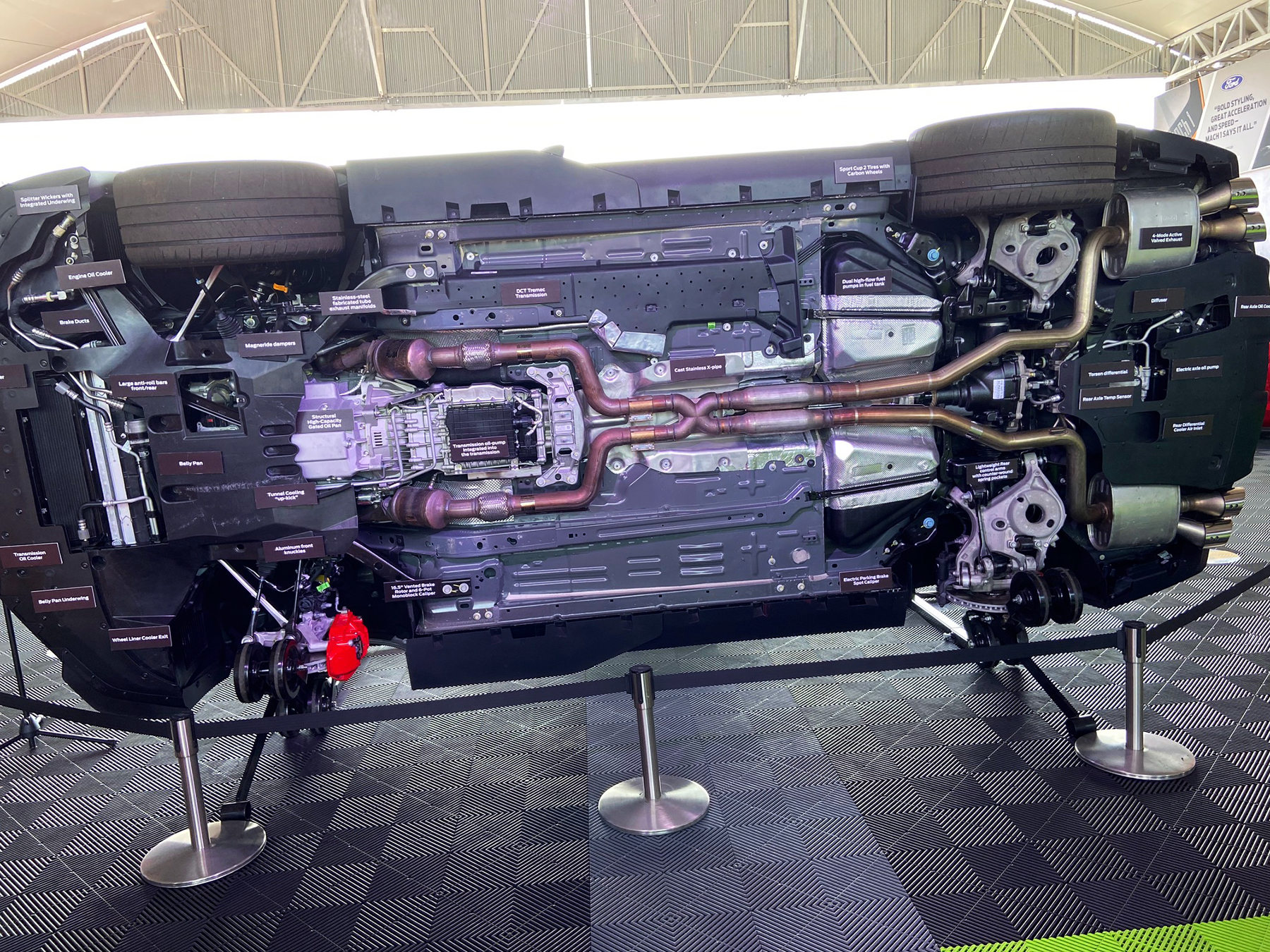 Flipping the GT500 on its side reveals its capable chassis with belly pans tailored to enhance aerodynamics and cooling, a dual-exhaust system that can be adjusted for sound volume, and “MagneRide” magnetorheological adaptable dampers. Ford also commissioned specifically calibrated components from suppliers, such as the Michelin tires and the Tremec 7-speed dual-clutch automated-manual transmission. Brakes are forceful and massive Brembo-supplied binders. Comparing the 2020 car to the very first Shelby GT-500 of 1967, Ford notes that the current model’s 16.5-inch front brake rotors are larger in diameter than the wheels of its famous forebear, and today’s 6-piston caliper body is wider than the rims on the Carroll Shelby-blessed original. 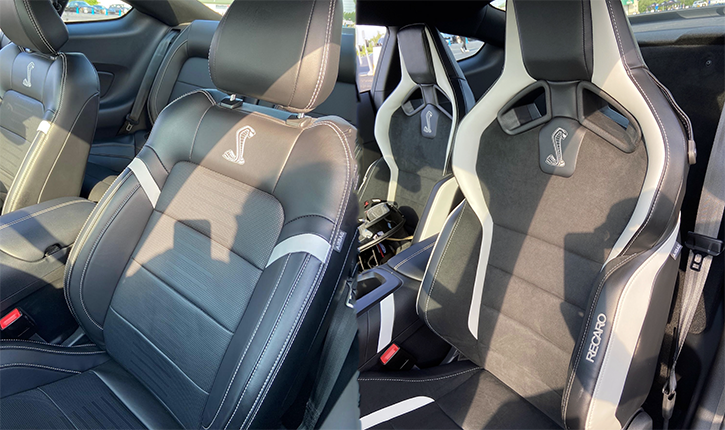 Standard GT500 bucket seats (left) and optional Recaro seats (right). The manually adjustable Recaros are snug but not constricting even if (like the author) you’re carrying a little extra “ballast.” Built off the basic Shelby seat frame, they incorporate all the necessary safety features to be street legal, but with integrated headrests and pass-throughs compatible with helmets and racing harnesses for track use. 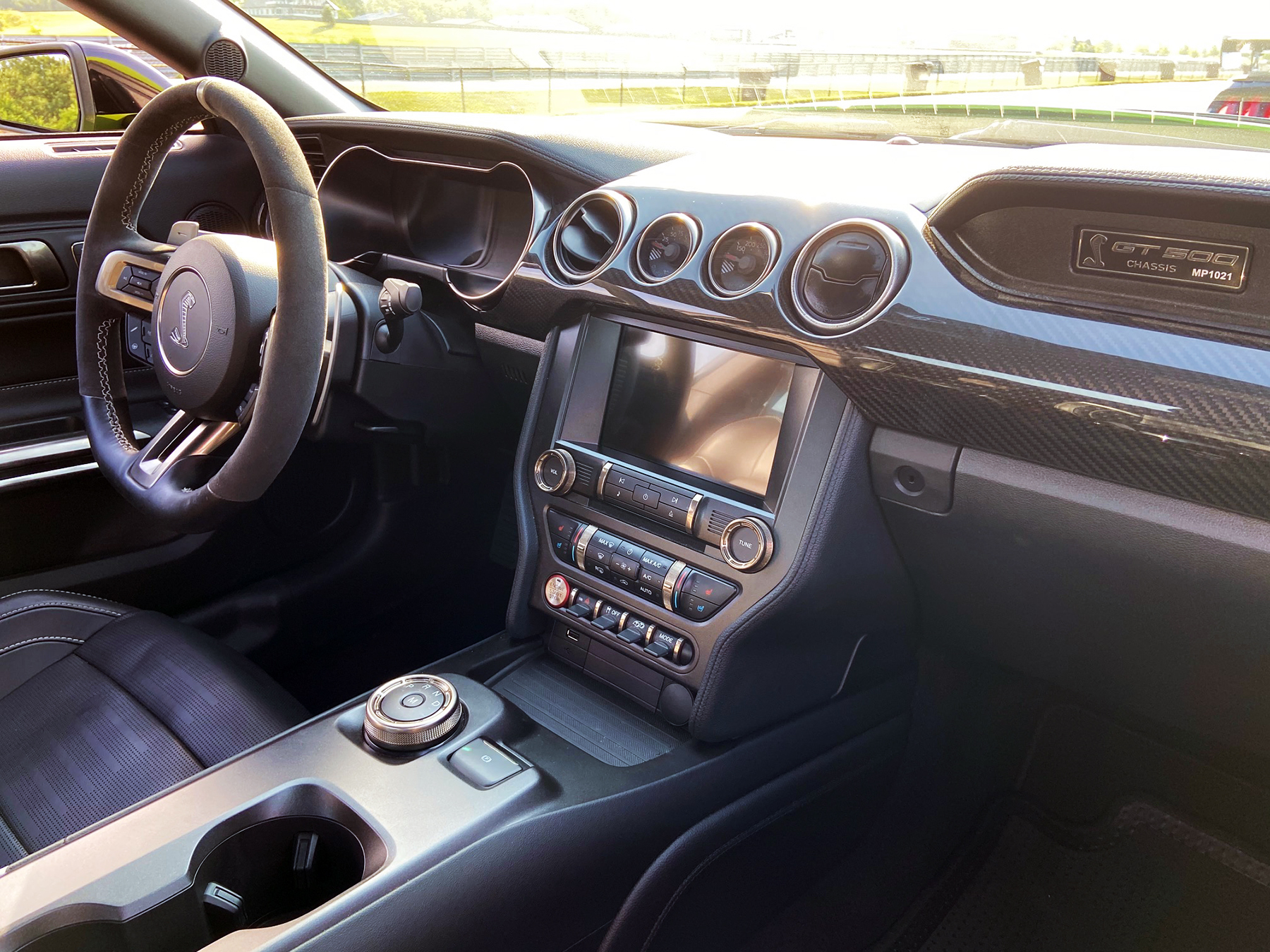 The cockpit is fundamentally Mustang in terms of layout and switchgear. Per Shelby custom, each car is counted off via a dash plaque. 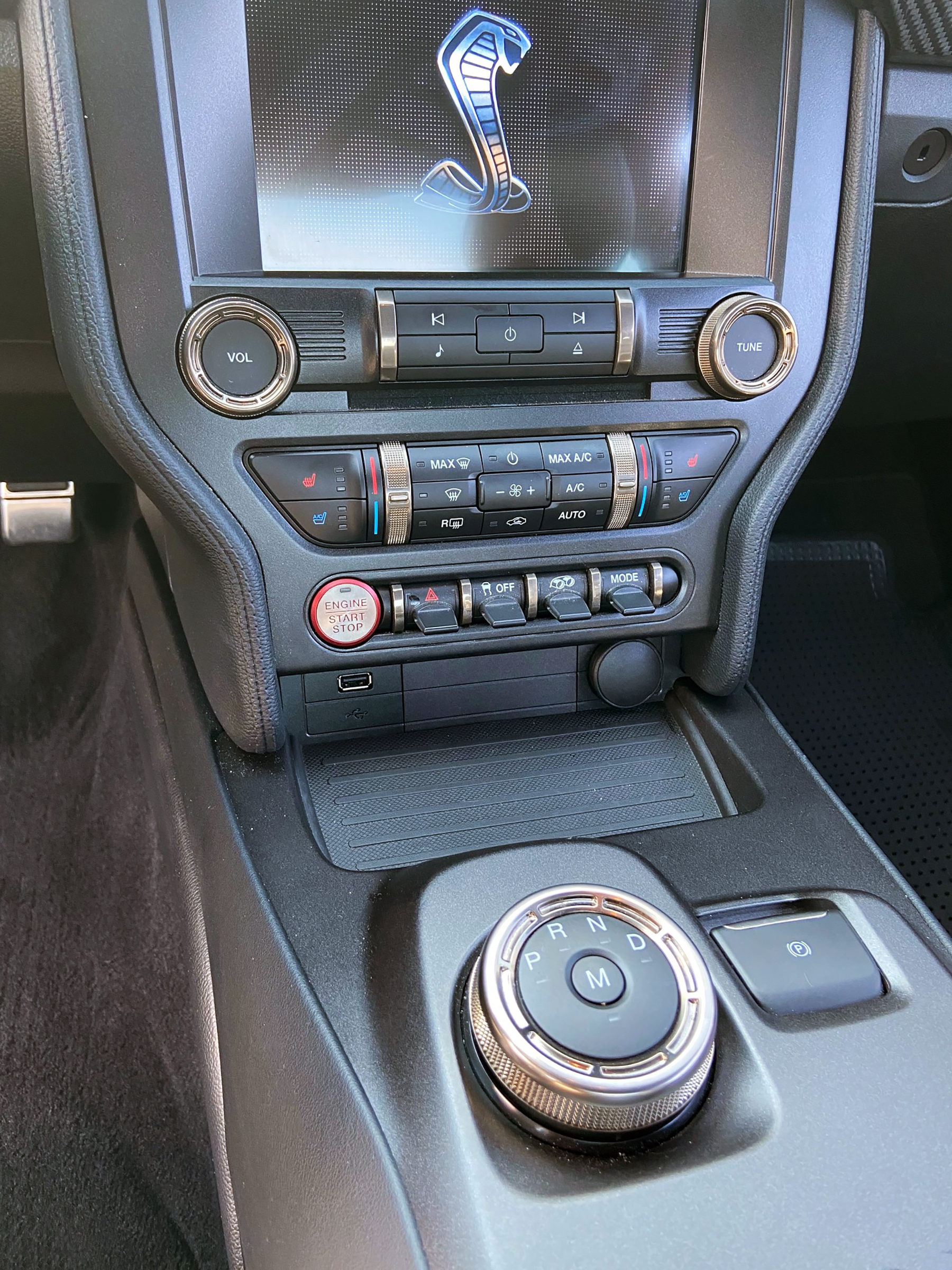 Shift lever? Nope. The Tremec gearbox, which can make shifts as quickly as 80 milliseconds, is activated by a dial on the console—though steering-wheel paddle shifters are included for drivers who choose to assume more control for themselves. Available drive modes are “Normal,” “Weather,” “Sport,” and “Drag & Track.” 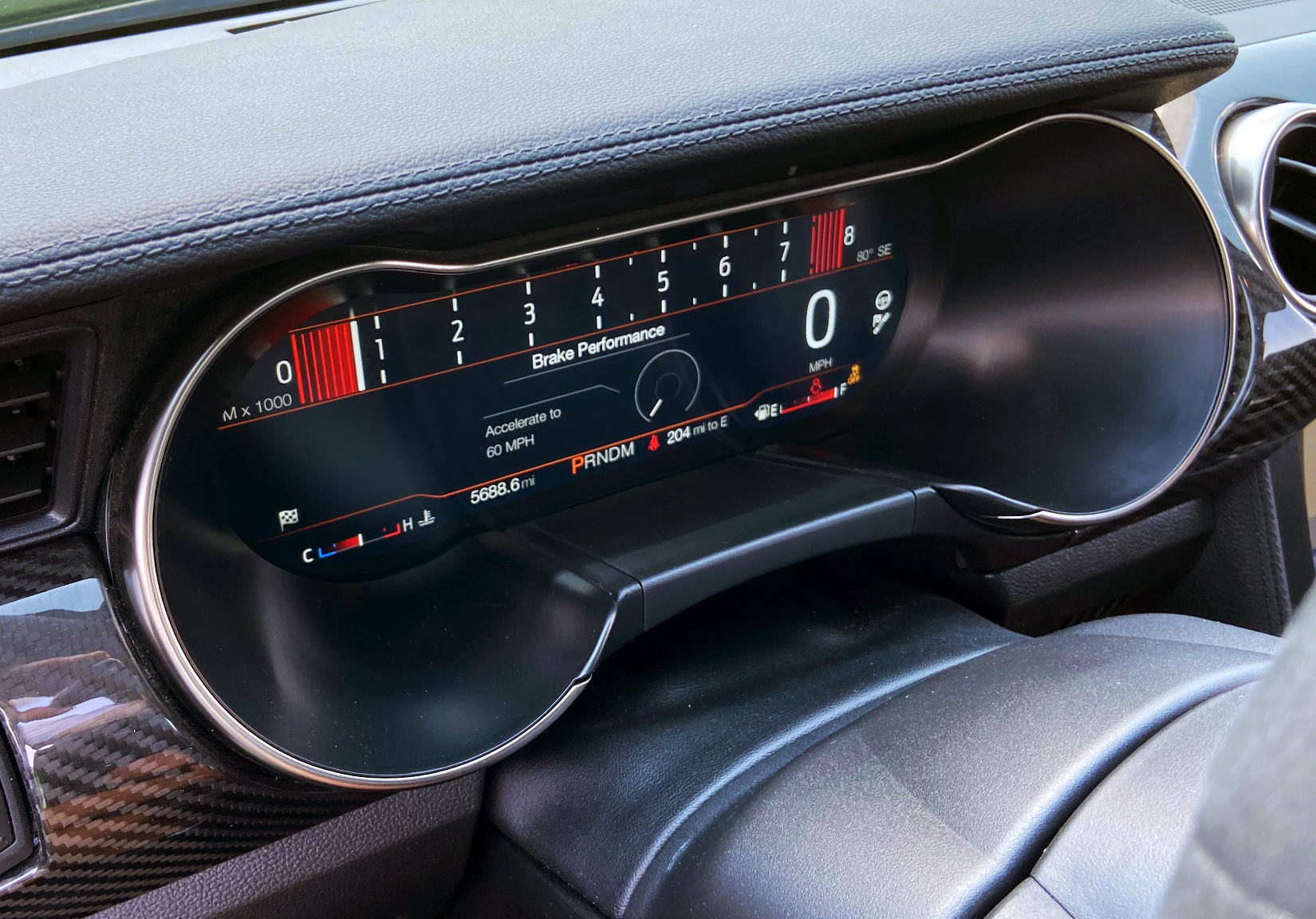 Drivers can cycle through standard Track Apps that show timing and vehicle-performance reports (such as 0-60-0-mph braking) in the electronic instrument cluster. 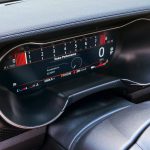 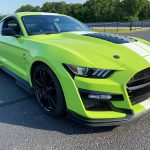 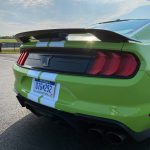 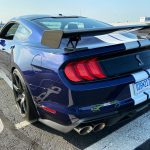 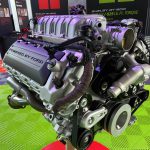 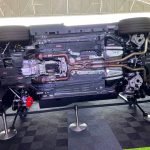 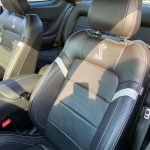 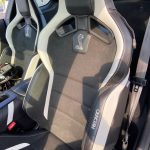 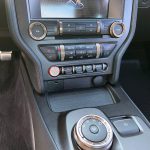